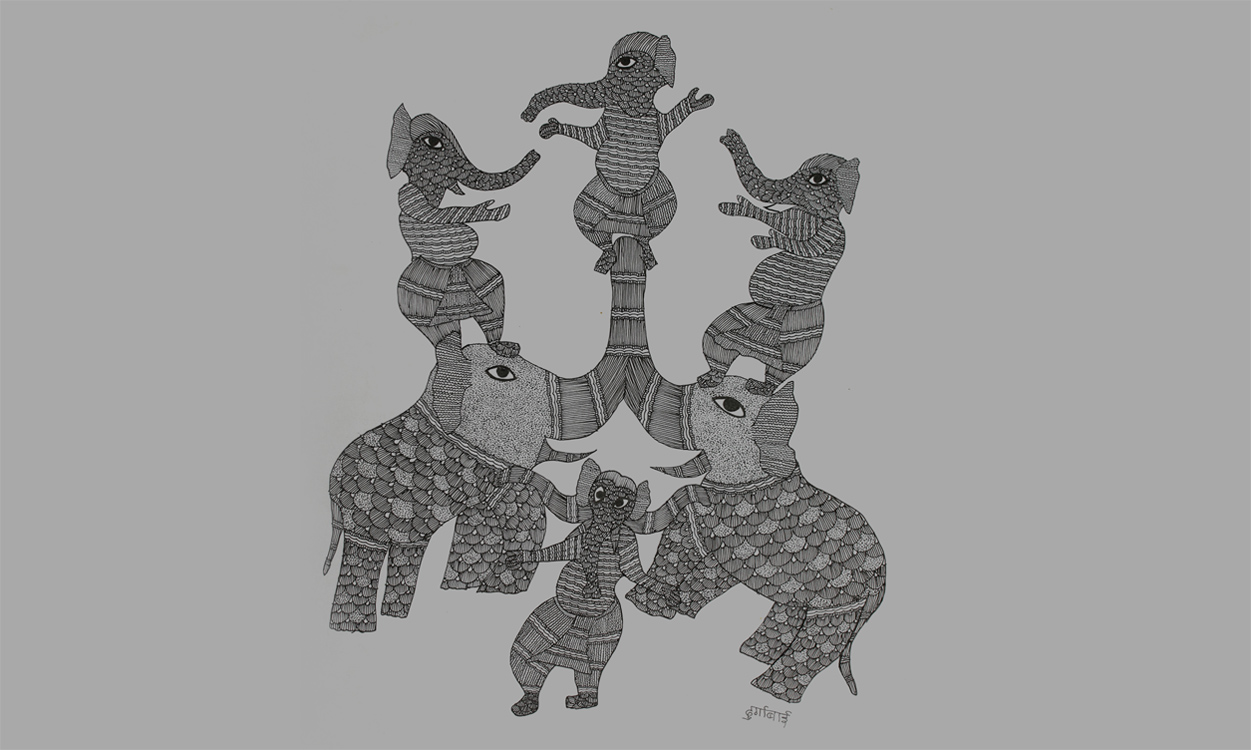 ‘Dancing elephants’ by Durga Bai from the Sarmaya collection

A trip to the ancient caves of Bhimbetka, a World Heritage Site south of the city of Bhopal, ignited a new passion in our lives to collect tribal art. The visit to these pre-historic caves, some filled with wondrous paintings, was a fascinating journey back in time. After seeing these caves in the dense jungle, we had the chance to visit a tribal settlement, accessible to tourists. As we walked around, we saw the art in the caves come alive in the life of these tribals. The need to paint daily life on their walls and living spaces was intriguing and one was left wondering if there was a modern-day parallel.

We didn’t have to go far to find that India was replete with such examples. In Bhopal, we discovered the school of art attributed to the famous Gond painter, the late Jangarh Singh Shyam whose story has been widely covered. He consistently depicted trees, animals, birds, Gods, and village life in his art, and the connect with nature seemed to be unbroken and intrinsic. Our journey into the art of the Gonds commenced when we visited Jangarh’s home, met with his wife Nankusiya, and acquired our first works. My wife Tina and I asked around and found many Gond tribals living in Bhopal, having relocated from their village in Patangarh.

More recently, while attending the Sanctuary Wildlife Awards ceremony, I could not but help wonder about modern society’s deep alienation from the beauty and quiet of our natural heritage.

A tribe of artists

From the Gonds and Bhils of Madhya Pradesh, the Warli of Maharashtra to the Santhals of Odisha, many of India’s tribes are living proof of harmonious existence with nature. They live simply, and intimately imbibe nature into their everyday lives and transmit it to their art.

This is best illustrated by the Gonds of Madhya Pradesh, the largest tribe in India with a population of over one crore. They are the original inhabitants of central India and have a glorious history of empires and victories. The successful kingdom of the Gonds traces its history to the mythical Gond hero Jatba, who founded the dynasty. He is believed to have been born to a virgin under a bean plant, and was protected by a cobra, which came and spread its hood over him to shade him from the heat of the day, when his mother left for work. When he grew up, he became famous for his feats of strength, and entered the service of the twin Gaoli kings, Ransur and Ghansur, whom he subsequently slew with a magic sword and, taking the kingdom in their stead, became the first Gond ruler. The forts of Patansaongi and Nagardhan in Nagpur district are attributed to him.

The Gonds were discovered by the world of contemporary art when the renowned artist J Swaminathan went searching for original tribal work to embellish Bharat Bhawan in Bhopal. The search led him to the legendary and talented Jangarh Singh Shyam. From painting on mud walls, the first transition was made to paper and canvas with the use of conventional paints and acrylic. And so, the custodians of this form of art, the Pardhans have managed to keep alive an age-old tradition and take their shared memory and their deities to the rest of the world.

Gondi art traces its origins “as a symbolic and decorative art used,” according to Roma Ramchandani, “to bring in cheer and ward off evil at festivities, known as Dighna.” Dighna is used to celebrate all occasions in the lives of the Gonds. The Gonds paint for decorative as well as ritualistic reasons. They also paint supernatural beings and spirits. The deer and birds are a particular favourite and they are typically shown in and around trees. Their Bada Dev along with other Gods like Ghurri Dev and Chulha Dev are often subjects of their paintings. They paint the tree in the belief that trees rise skywards and connect to the Gods. It was also in the Saja tree that Bada Dev hid and from where he descends to accept Gond offerings.

The wall paintings use natural materials available in the vicinity of their homes. The walls are first layered with a special soil called pidor, and various natural materials are used to render different colours. For example, coal for the colour black, chui soil for yellow, red soil or geru for red, the sap of the tinsak plant for dark red, ramraj soil from around the Narmada river for yellow, sem leaves for dark green and cow dung for light green and variants thereon.

The fibre of beaten bark is made into a brush called koochi and that is the basic tool for painting the walls of the homes. The artist first plasters the area of the wall to be painted with a paste of soil, cow dung and straw. After it dries, the area is coated with pidor, which provides a smooth, white background to be used as a canvas.

The school of Jangarh

Jangarh exemplified the natural theme of Gondi painting. Apparent enemies on the forest floor, snakes and birds, tigers and deer come together in his creative visualisations. The silent message is clear—everything is interconnected. Just as creatures and their habitats and men and their gods come together on his canvas, so it is in the life of the Gond tribals. The tribals were in communion with the beasts and trees around them and understood the unbreakable links of our planet. If one broke, all failed.

Tragically, Jangarh died in mysterious circumstances in his forties, but not before he had encouraged his community members in the village of Patangarh to take up the art form that he had experimented with at the instance of Swaminathan and which went by the term ‘Jangarh Kalaam’.

Post Jangarh’s discovery by Swaminathan, the Gonds moved to mediums like canvas that were transported out to their villages. The village folk took readily to the example set by Jangarh and quickly learnt the new technique of working with canvas, craft paper and acrylic. They started to move out of Patangarh and relocated primarily to Bhopal. Today many of them live in Bhopal. Nankusiya Shyam, Durga Bai, Venkat Shyam, Rajendra Singh Shyam, Ram Singh Urveti, Narmada Prasad Tekam, Mansingh Vyam, Sukhanandi Vyam are some of the better-known artists. Despite most of their origins in one village, each has his or her own distinctive style and rarely do they encroach on one another’s turf. The artists work with an inventory of patterns, which are typically made up of lines and dots, but can be arranged in a manner that is unique to each artist thus creating distinctive styles.

So many of the Gonds are internationally-renowned artists. They travel the world, paint prolifically, illustrate children’s books and participate in art fairs and exhibitions. They have also been commissioned to paint folklore from other countries like Scotland, and have contributed to animation movies.

The Dravidian term Gond comes from Kond, which means green mountains. The community is naturally focussed on the preservation of nature. Without green mountains, wildlife habitats and water tables die out. And without the bees and the birds, plant cycles are affected.The Gonds understood it. They may be simple tribal folks but they ‘get it’. Why don’t we?

Originally published in the August 2015 issue of Sanctuary Asia. To support grassroots conservationists, in 2014, Paul founded the Tina Abraham–Sanctuary Initiative for Nature Action (TINA) in memory of his wife.