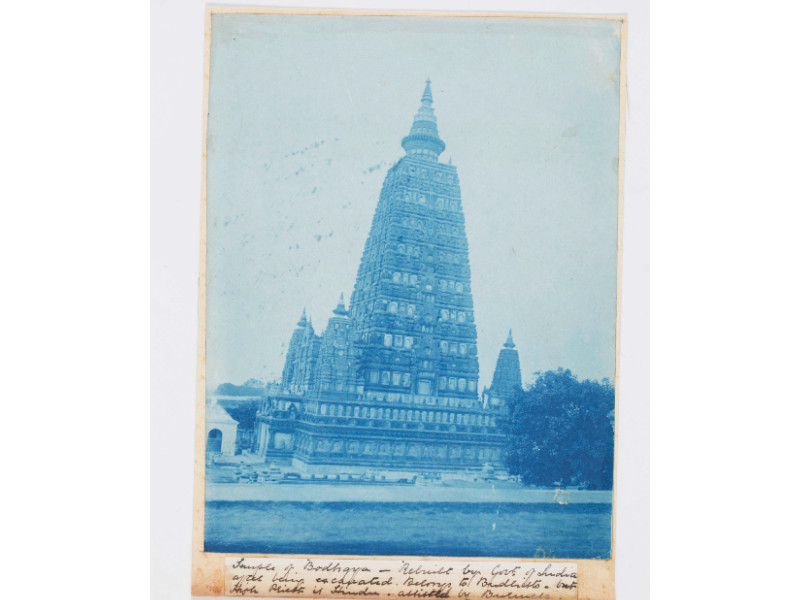 Mahabodhi Temple at Bodhgaya, a cyanotype print from the Sarmaya collection

While the birth of photography is considered to be an 19th-century phenomenon, experiments with the science behind the medium had been in motion from centuries before. The driving force behind this? A human desire to defy nature, to document the momentary with precision. Consider artists Thomas and William Daniell, whose desire for accuracy led them to use the camera obscura – an early predecessor of photographic processes where a dark, pin-hole box was used to capture an inverted image of the desired object. Then using a mirror, the image would be delivered right-side-up onto a sheet of paper from where the artist would trace an outline.

But the real game-changer was the announcement of two rather practical photographic processes in 1839 – from France’s Louis Daguerre and Britain’s William Henry Fox Talbot. At once, the possibilities around photography became more concrete and set forth enthusiasts around the world on their quests to capture photographic prints.

Daguerre’s invention, the daguerreotype, was the subject of three long articles in the Bombay Times in December 1839, and a Calcutta doctor – William Brooke O’Shaughnessy is said to have mastered the daguerreotype process as early as March 1840. He had also been experimenting with a variation of Talbot’s photographic process at the time, an account of which was produced in the Asiatic Journal in 1840.  Other early figures in photography too sought to continually improve upon or altogether discard existing techniques in pursuit of improvement. The difficulties associated with these early methods of photography only provided grounds for more experimentation. Photography pioneers sought more precision in images, easier transportability of equipment, and permanence in their prints. And they did succeed, as even the phone cameras in your pocket can now testify.

Announced by Louis Daguerre in 1839, the daguerreotype was the first practical photographic process to be accepted publicly. A silver-plated sheet was exposed to iodine vapour in order to form a light-sensitive layer of silver iodide. The plate would then be placed for a long exposure in the camera, after which it would be removed for the image to be developed over heated mercury and fixed in a salt solution.

Besides being cumbersome, the daguerreotype also had other limitations – the most important one being that it produced a single unique copy of the image with no scope for replication or multiple prints. Regardless, daguerreotypes were still in use in India till the end of 1850s by a few studios, even though its limitations had caused for it to lose its popularity in Europe by then.

While William Henry Fox Talbot had made his first photographic negative by 1835, he had largely abandoned his experiments thereafter. However, Daguerre’s announcement from across the channel compelled him to resume his research. By 1841 he patented the calotype process wherein a photographic negative could be used to produce multiple positive prints.

In this process, the image was captured on a sheet of high-quality paper was coated with light-sensitive silver iodide. The developed negative would then be fixed in a chemical solution to stabilize the image and remove underdeveloped silver compounds. Positive prints of the image would then be made using the salt paper print process.  The calotype process dominated photography for well over a decade, and continued to be used in India after its fallout in Europe into the 1850s

Here’s a video on Talbot’s experiments and success

The most dominant photographic process for 30 years or more since its announcement in 1851, the wet collodion process involved coating a glass plate in a layer of collodion which was then made light sensitive by bathing it in a silver nitrate solution to produce silver iodide.

Invented by British photographer Frederic Scott Archer, the process produced high-quality images with a degree of sharpness that at once rendered Talbot’s Calotype process as outdated. However, it was no easy feat to master – the collodion film retained its light sensitivity best only while wet, and so the glass plate had to be coated, exposed and developed immediately in a single sequence. This called for photographers to carry a great deal of equipment with them into the field, which proponents of the method such as Samuel Bourne did during his photographic journeys into the Himalayas, with the help of 30 to 60 local men assisting as porters. 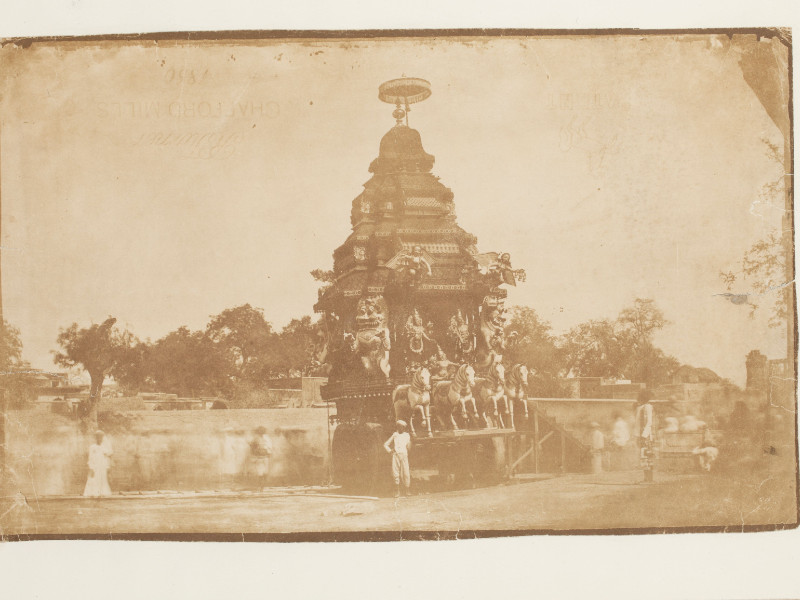 Invented by Talbot in 1840, salt prints were the earliest photographic positive prints to be made from negatives and remained in use until they were replaced by albumen prints about a decade later. As part of the process, a sheet of paper would be immersed in a bath of salt and then in one of silver nitrate, as a result of which a light sensitive layer of silver chloride would be produced. Once dry, this paper would then be placed in a frame in contact with the negative and exposed to sunlight. The sun would reduce the silver salts in the paper to their pure metallic stage, and lo – you have your image!

Paired with the calotype negative, salted paper prints were popular in India well into the mid 1850s even though it had lost its popularity to the collodion process in Europe by then. 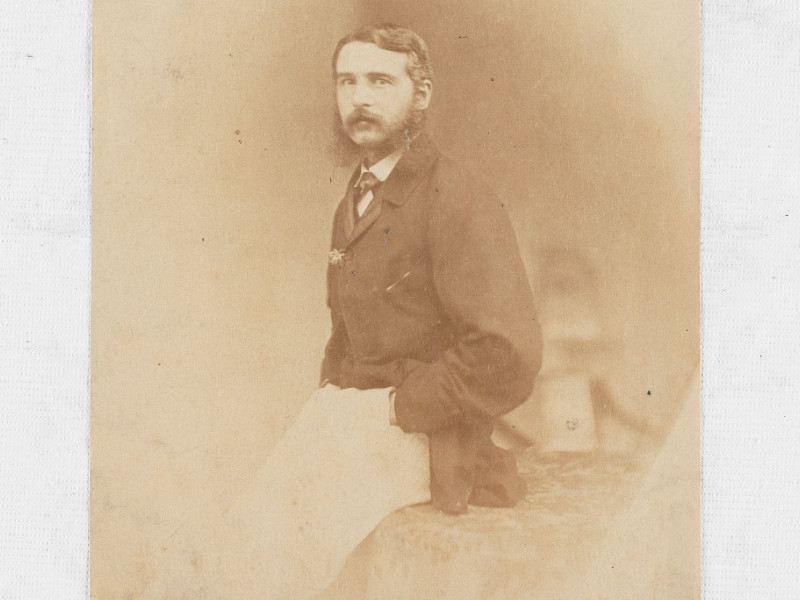 Albumen print from the Sarmaya collection

Albumen prints were invented in 1850 and soon overtook salted paper prints in popularity. In fact, it remained the most popular type of print for the next four decades, usually paired along with wet collodion glass-plate negatives.

A method mostly attributed to French inventor Louis Désiré Blanquart-Evrard, the albumen print process involved coating paper with a mixture of albumen (egg white) and salt. The paper would then be floated on a bath of silver nitrate during which a light sensitive layer of silver chloride would be formed. This paper would then be exposed to sunlight, while placed in contact with a negative in order to produce a print.

Albumen prints yielded clearer images than those on salt paper prints. They also came with a deep glossy finish as opposed to the matte surfaces of the latter. 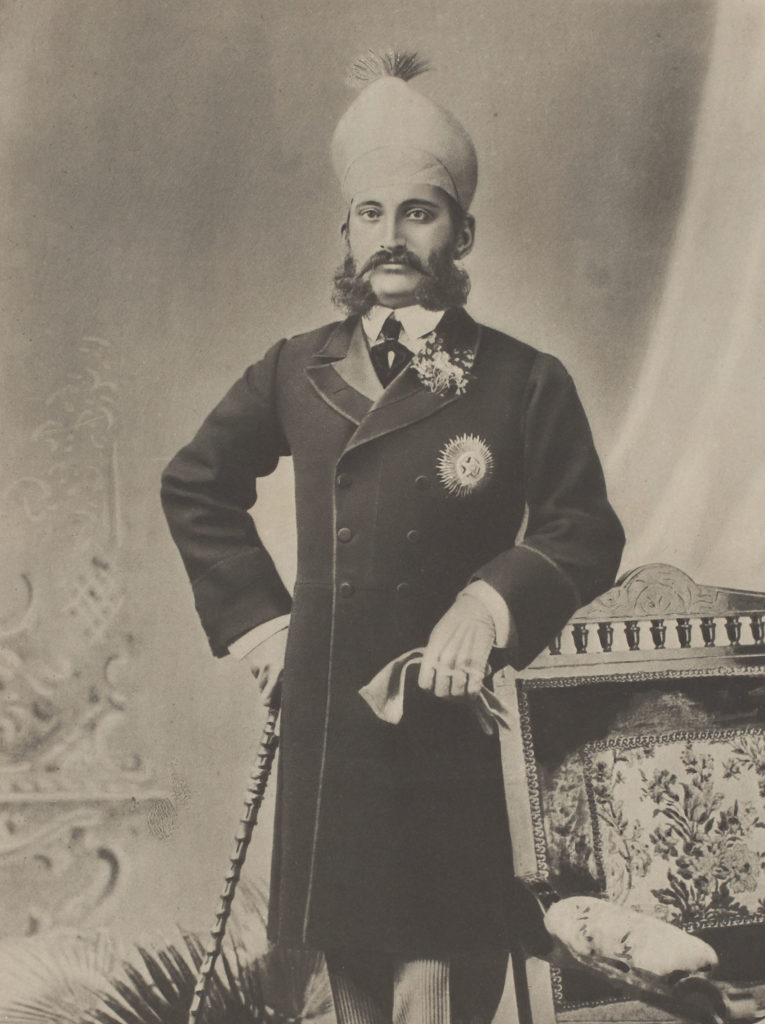 The technique for developing Platinum prints was discovered by British inventor William Willis in 1873, and utilized the light sensitivity of platinum salts as opposed to that of the usual silver. Willis set up the The Platinotype Company in London in 1879 and began offering commercial platinotype papers for sale by the following year. The process gained much popularity over the following decades for two main reasons — the high stability and permanence of the resulting images, and the remarkable range and subtlety of their tonal variations. Yet, platinum was a rather expensive metal and its price only climbed with the First World War (during which it was declared a strategic metal and banned in countries such as the United States).

Sarmaya’s collection includes an album of 135 rare platinum print photographs taken by Wiele and Klein of Madras from the Delhi Durbar of 1903 –conceived by Lord Curzon to celebrate the succession of Edward VII and Alexandra of Denmark as Emperor and Empress of India. 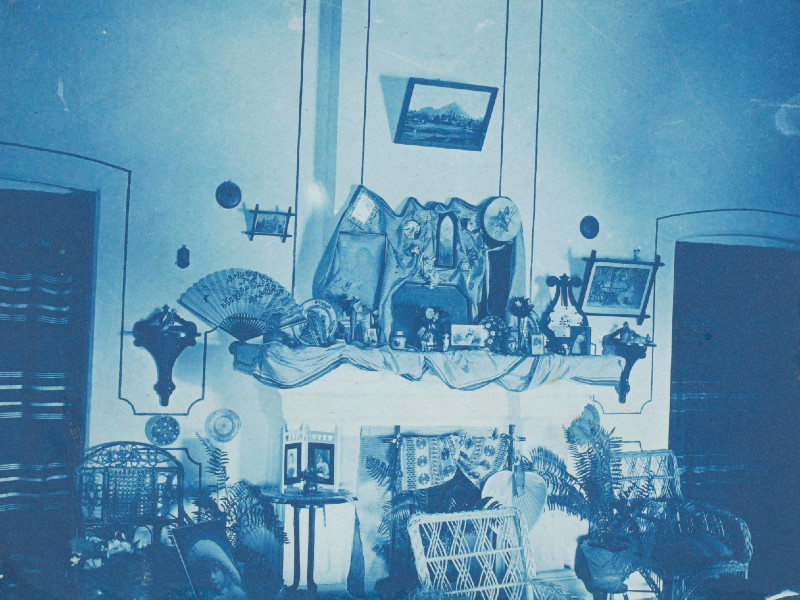 Cyanotype from the Sarmaya collection

Invented by Sir John Herschel in 1842, the cyanotype process used the light sensitivity of iron salts as opposed to those of silver. Rather low-cost and simple, the process was often used in making proofs of images. Characterized by their brilliant blue colour, cyanotypes were also used in the mapping of architectural projects. The term ‘blueprint’ is considered to have found its inspiration here. 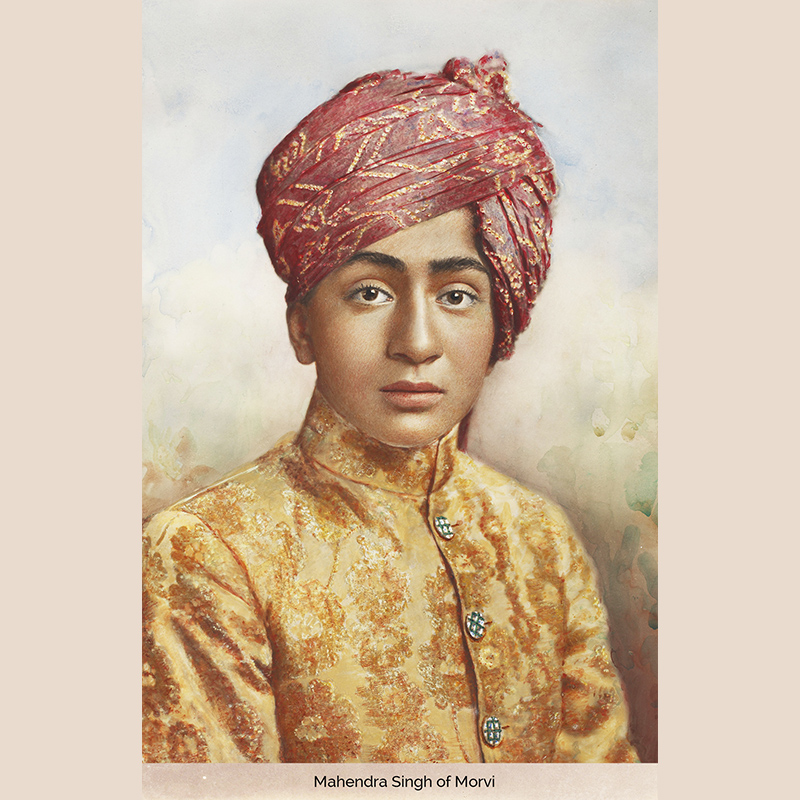 Painted photography provided grounds for collaboration between photographers and artists. Miniature painters who once served princely courts now could apply their fine painting skill and eye for minute details as colourists at photo studios. 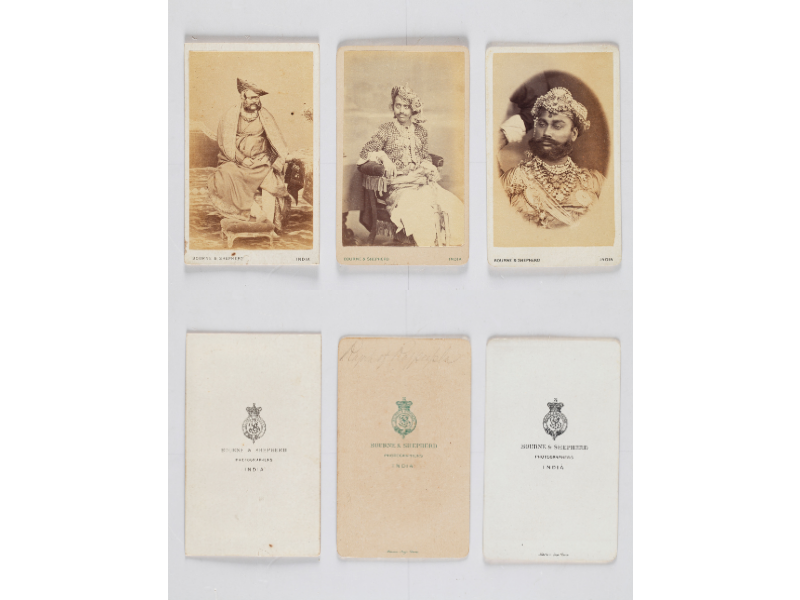 Patented by Parisian portrait photographer André-Adolphe-Eugène Disdéri in 1854, Carte de visites came to be as an inexpensive method to produce a large number of portraits. Using a camera with four lenses, he was able to create up to eight negatives on a single full-sized plate. The eight small rectangular images produced in the process were then cut and glued to cardboards of approximately 4 x 3 inches for sale at relatively lower costs.