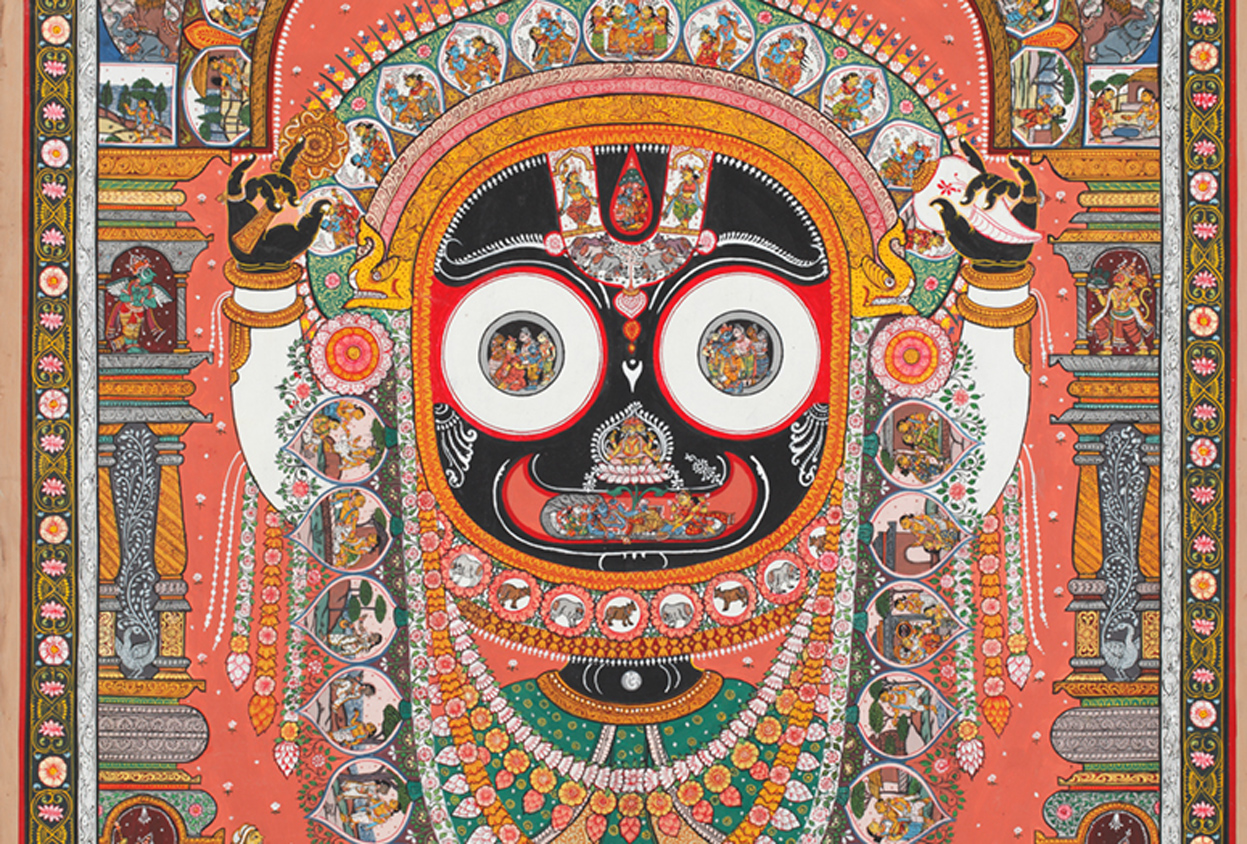 Against the backdrop of the breathtakingly beautiful Konark Sun Temple and the calm waters of an azure Chilka Lake, the local art tradition of Pattachitra was born in the 12th century AD. The word literally means cloth (patta) pictures (chitra) in Sanskrit, and refers to the distinctive scroll paintings, usually featuring Hindu gods, which come from Odisha.

Its origins can be traced back to resembling the old murals in the sacred centres of Puri, Bhubaneshwar and Konark – which explains the religious theme running through most of the paintings. Today, as it was then, the art of Pattachitra is a disciplined one, and the chitrakars, or artists, maintain a certain rigidity in their use of colour and pattern. It is an art form they hold very dear, and immense skill, patience and hard work goes into keeping it alive — one painting can take up to a few months to be finished.

Some of the best Pattachitras are still found in the Raghurajpur village in Odisha, and in and around Puri; the chitrakars have managed to convert their simple homes into a heritage village that draws the admiration of tourists. So great is the quest for authentic Pattachitras, that historians have discovered that the finest painters live in Chitrakar street, Paralakhemundi, in the Ganjam distict of Odisha.

The paintings are hugely significant in Odisha, drawing their importance from the fact that residents consider them worthy of replacing idols for worship. The admiration for them is particularly fervent in the month of Jyestha. On the day of the full moon (Debasnana Poornima), the deities have a ritualistic bath to cool off in the scorching summer heat. As a result, the gods fall sick for 15 days. During this fortnight (called Anasar), their devotees cannot worship them, and so worship three paintings (called Anasar Patti) of Lord Jagannath, Lord Balabhadra and Maa Subhadra instead.

While Pattachitra is usually done on cloth and canvas, it can also be found on the outer walls of houses in Odisha, or even on Gangifa (or Ganjapa) cards. Themes of the Jagannath and Vaishnava sects are recurring ones, but the paintings also usually tell a story, and can singlehandedly walk you through India’s ancient history. Inspired by other mythological tales like the Puranas, they also depict the Jagannath temple of Puri, in designs with one, three or five temples. The most popular themes explored through Pattachitras are Thia Badhia (depiction of Jagannath’s temple), Krishna Lila (enactment of Jagannath as Lord Krishna, displaying his powers), Panchamukhi (the 5 heads of Lord Ganesh) and Dasabatara Patti (the 10 incarnations of Lord Vishnu).

One of the noteworthy features of Pattachitras is that they are made with completely natural colours. The colour scheme varies from black and white to splashes of red, yellow, blue and green. Red is usually used as the background colour. But these colours can’t simply be procured just anywhere, they are made using the original, laborious methods of preparation. For example, the white is prepared with powdered conch shells, which is boiled and mixed with katiha gum until a paste is formed. The red is a mineral colour called hingula, and a stone called haritala is used for yellow.

The patta itself is made by soaking tamarind seeds in water for three days and then grinding them to prepare a paste. This paste holds two pieces of cloth together and is coated with a powder of soft clay or lime stone till it becomes firm. It is polished with rough stone, and then smooth stone, till it becomes leathery and therefore ready to be used as a canvas.

Pattachitras will always have something idiosyncratic about them. As shown above, the chitrakar has brilliantly superimposed on a traditional black and white painting, a hint of colour, which he has cannily used only to outline all circular figures in the drawing (like the jewellery of the figures, or circular designs on their clothing). This has the effect of augmenting the movement of the figures, and bringing the pattachitra to life. The artists take immense care to draw the human figures frontally, while showing the face and leg from the side, but keeping the view of the elongated eye frontal too.

Another notable feature is that the paintings depict the same characters in different forms. Small snapshots of these different forms, in different shapes, form the border of the painting, while the centre depicts a larger representation of the characters. One of the most popular borders is that of two entwined snakes, which can be seen the entrance to the Konark temple as well. Pattachitras are usually clear snapshots with great juxtapositions, and do not feature landscapes or distant views. They are clear, to the point.

Back in 12th-century Odisha, Pattachitras were a family tradition. There used be families of chitrakars, with each member having a distinct role. The women were in charge of preparing the canvas: washing the cloth, stiffening it with tamarind seed and gum, cutting the pieces into appropriate sizes, and then polishing them for painting. The final canvas created is off-white in colour, and the master painter (usually male) begins to paint.

Some historic texts have evidence of the master painter doing the initial sketch and the final one, and the women filling in the colours. The chitrakar also had rules to follow. He had to be completely vegetarian during the time of painting, he had to sleep on the ground without a mattress, and wear a new dhoti while working on the paintings. Although perpetuating and compounding a pre-existing gender hierarchy, Pattachitras helped solidify relationships within the villages. They brought about a kind of unity and oneness, a single purpose and common passion that resulted in some of the most beautiful art this country has ever seen.