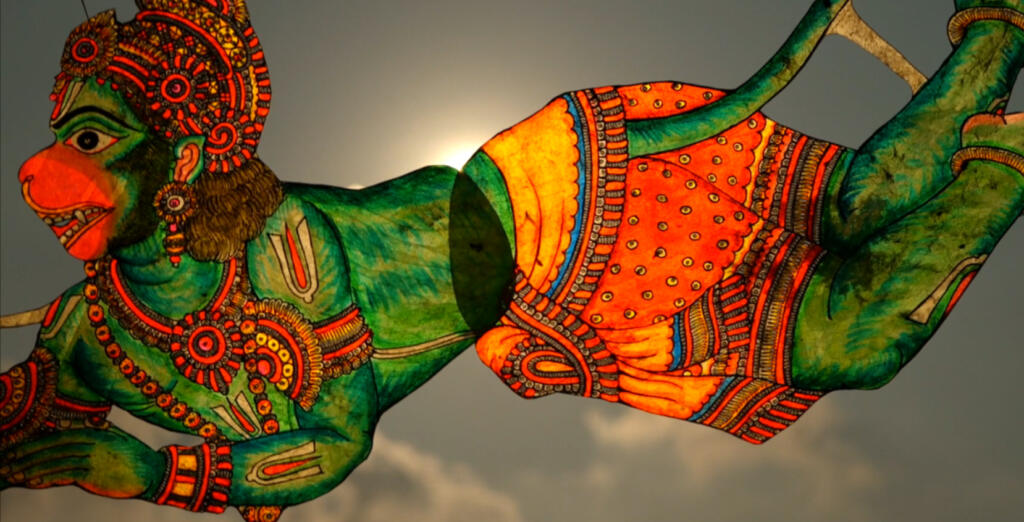 The stage is set. On plain ground, a bamboo frame is erected with a white cloth stretched across it to serve as a screen, with the warm glow of oil lamps shining through. The audience is seated on mats in front of the screen, waiting. And then, the shadows appear. READ MORE.

A note on Sarmaya's collection of leather puppets

Sarmaya houses a collection of 180 leather puppets in the south Indian tradition, most of which were made in the late 20th and early 21st centuries. Many of the puppets in our collection are in the Telugu style, where the performing art is called Tholu Bommalaata, but there are also some exquisite samples of puppets used in Togalu Gombeyatta, a closely allied form practised in the neighbouring state of Karnataka. There are some differences in style between the two schools of shadow puppetry. Traditionally Togalu Gombeyatta puppets were made out of one sheet of dried hide, this is why they have fewer movable limbs and sometimes none at all. Tholu Bommalata puppets are made from 2-3 dried hides joined together, and the puppets have a minimum of four joints and a maximum of 12 joints to ensure maximum mobility. Andhra puppets tend to be much larger, sometimes measuring well over 3 feet in width and 6 feet in height, whereas Karnataka puppets are more petite coming in at about 2 feet in width and 4 feet in height.

Andhra puppets are characterised by wide circular eyes, with most of characters drawn in profile. The colour scheme, style and decorative elements of the former are heavily influenced by the aesthetics of the 16th-century Lepakshi temple in Anantapur district of Andhra Pradesh. 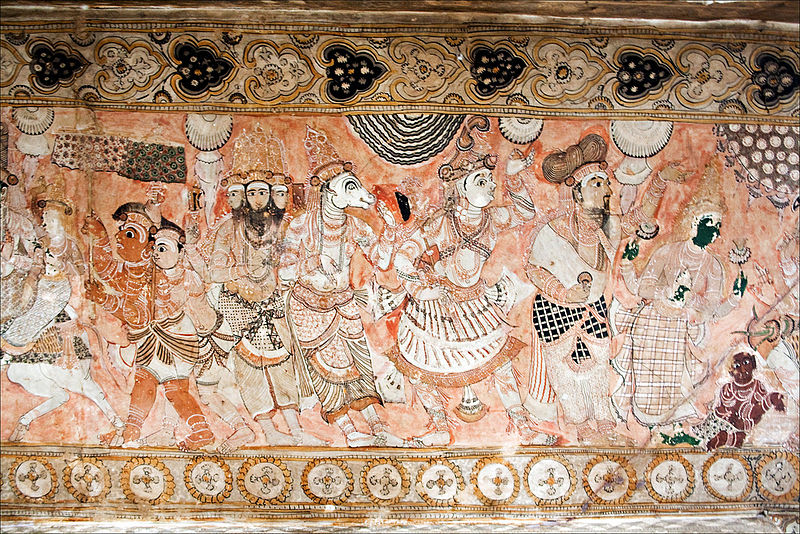 Painting from the ceiling of the Lepakshi temple. Image courtesy Wikipedia Creative Commons—click to visit the page

Karnataka puppets showcase a mixture of influences from the Halebid Hoysaleshwara temple and Islamic culture. Male puppets have long thin mustaches and long beards and wear boots. Togalu puppets have fewer perforations whereas Tholu puppets use several geometric perforations to showcase garlands, clothes and jewellery. Contemporary artists like Chithambara Rao borrow from both traditions to create large-scale, highly intricate puppets that meld the best of both worlds and experiment boldly with colour and form. 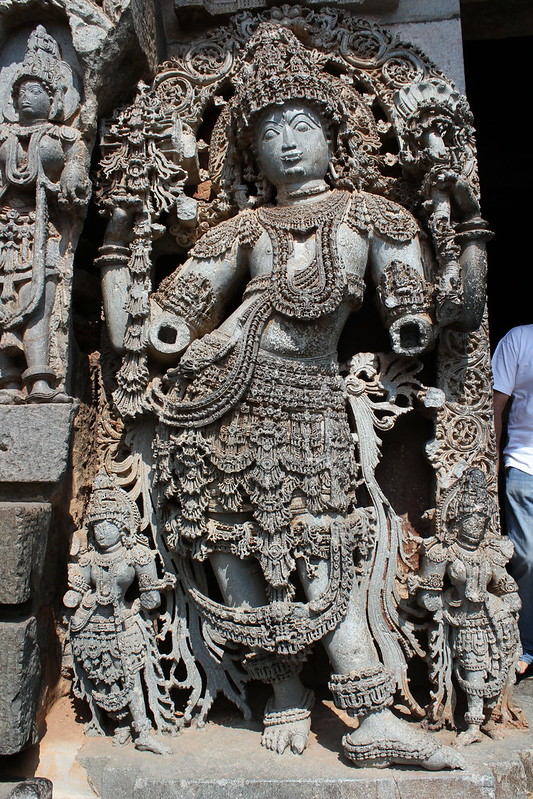 How It All Began

Tholu Bommalaata is generally practised by a troupe whose members belong to the same family, with the art being passed down orally from one generation to the next. The artists have their own narrative explaining the origin of their art form, as is common in all oral traditions, and often trace their lineage back to a super-devotee mentioned in the scriptures. These legends, which differ in detail from region to region, stress on the divine origin of the art form and grant divine status to the artists' ancestors. One such origin story found among the Togalu Gombeyatta artists of the certain regions in Karnataka goes like this...

Drag the slider to read the story

The ultimate action-hero and humanity's never-failing last hope, Hanuman or Anjaneyaswamy is the star of any scene he is in. For a puppeteer, there's no greater honour than being allowed to play Hanuman, who has all the great fight sequences. His superpower is the ability to shrink or expand to any size to accomplish any task. Naturally, the Hanuman puppet too must reflect this shape-shifting ability. Here are a few samples from our collection. Each form has a specific purpose. Vishwaroopa Hanuman, the first puppet from left on the scale below, is the Lord appearing in his true form, as large as the universe—in Tholu Bommalaata terms, that's over 6 feet 7 inches tall! Whereas, Hanuman in the Ashoka Vana (to the far right) has to fly under the radar, so he's a diminutive 51 cm.

Characters from the epics of Ramayana and Mahabharata have gods, devotees, demons, animals and jester puppets. Each one of these characters have special characteristics, other than colour to help identify them. Because these conventions are the same across the two epics, sometimes  puppet heads are detached and swapped depending on the play. Here are a few visual clues to help you identify the characters. Most of these puppets belong to the Tholu Bommalaata style, although some like Yashodha below are from the Karnataka tradition called Togalu Gombeyatta.

Move the sliders to compare the puppets.