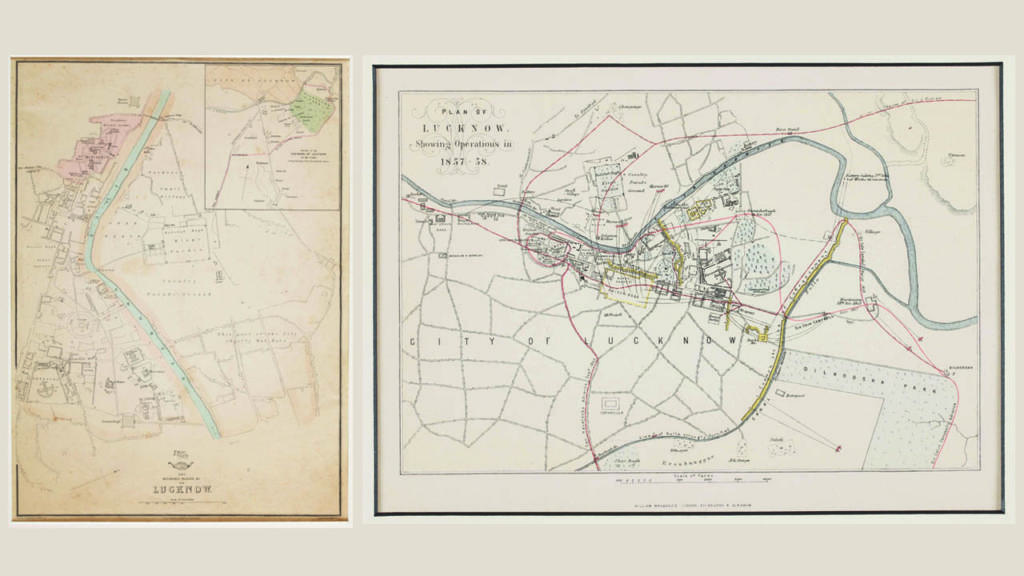 According to the prevailing view of cartography experts, maps can be categorised into two types: topographic or general maps, which might help you find your way around an area, and thematic maps, which serve to highlight specific features or a particular event, for eg, a battle plan. Regardless of their type, all maps tell a story of their time. Let’s listen to some tales from our cartography collection.

From the 17th Century onwards, European imperial forces began to establish their dominance along the shoreline of the Indian subcontinent. They built forts and garrisons to protect their assets, which included industries, administrative structures, residences, and eventually, the towns themselves. We see three such maps here. 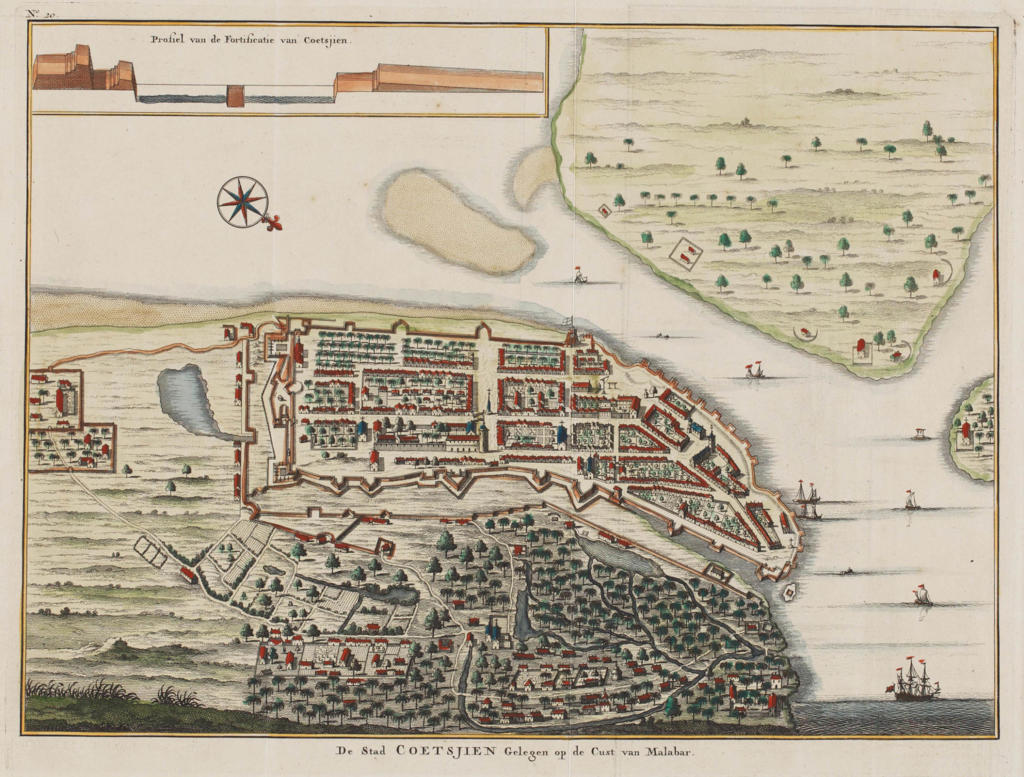 This 18th century Dutch map of the seaside town of Cochin aka Kochi by Francois Valentijn is from Oud en Nieuw Oost-Indiën, an eight-volume work that describes the history of the Dutch East India Company in the countries of the Far East. Unlike most modern maps, this one shows a lively depiction of the harbour, complete with coastline structures, residences, and ship fleets. A profile depiction of the fort of Kochi is shown in the inset profile at the top of the map. While it focuses mostly on the Kochi fort’s plan, many of the features of a map are absent with the exception of the north arrow. 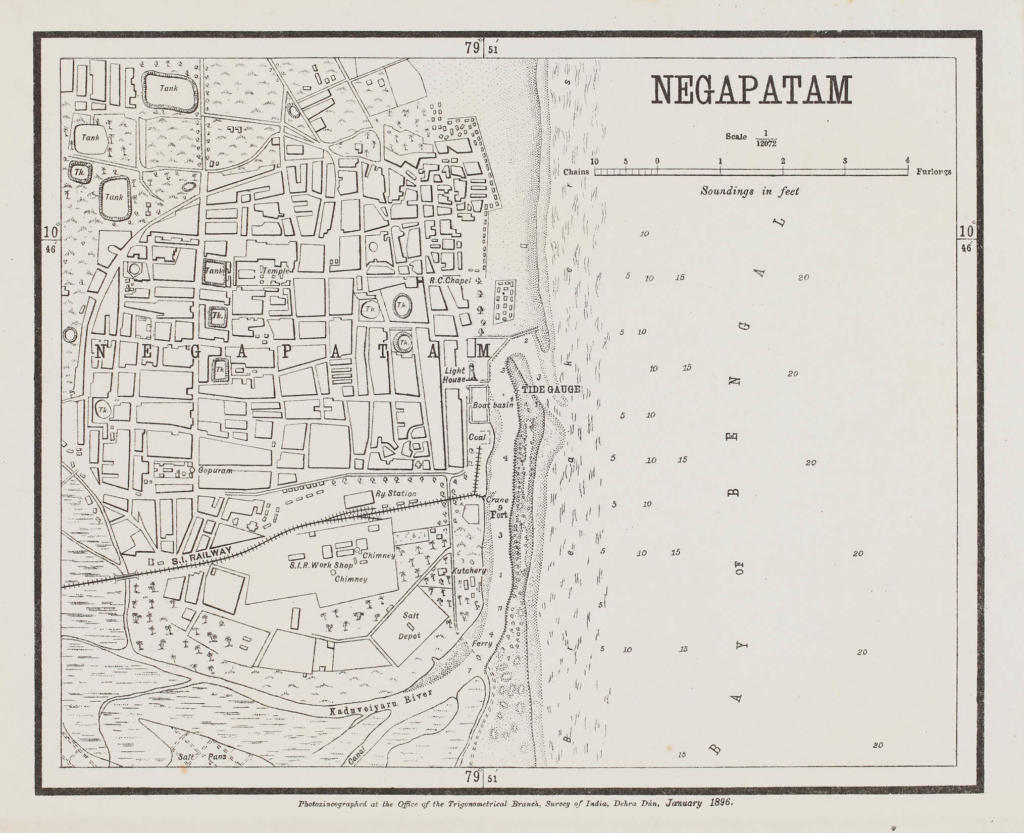 Map of Negapatam, Office of the Trigonometrical Branch, Dehradun, 1896

In the map above, we see the medieval coastal town of Nagapattinam. It provides a thorough overview of the city, including temples, churches and water tanks. Unlike the previous map of Cochin, this one was created by the Survey of India’s Office of the Trigonometrical Branch, Dehradun, and published in 1896. As cartography progressed by the 19th century, a greater emphasis was placed on precision in documenting thanks to the extensive enterprises by the Survey of India, like the Great Trigonometrical Survey of India.

The Residency Palace and City of Lucknow, 1863, by Edward Weller

The map above is another example of the detailed town map. Edward Weller made this as part of a series of global maps published in the British Weekly Dispatch newspaper. During the Uprising of 1857, the city of Lucknow was besieged for several months. The dividing lines within the newly seized colony are highlighted in Weller’s print, emphasising the separation of the British Residency and encampment from the remainder of the city. Its depiction of a fairly tranquil and orderly city on the eve of the insurrection contrasts sharply with many violent and dramatic photographs of the siege circulated in the United Kingdom. An inset map depicts the uprising itself, including the two efforts by British forces to suppress it.

The Portuguese, Dutch, Danes, French, and English all established settlements along coastlines from the seventeenth century onwards. While the coastlines became the first battleground, clashes between the British and Indian kingdoms quickly followed. With each battle or campaign, there was a push to develop maps to aid in comprehending the character of the area across which armies would march and fight and chronicle successes for posterity. 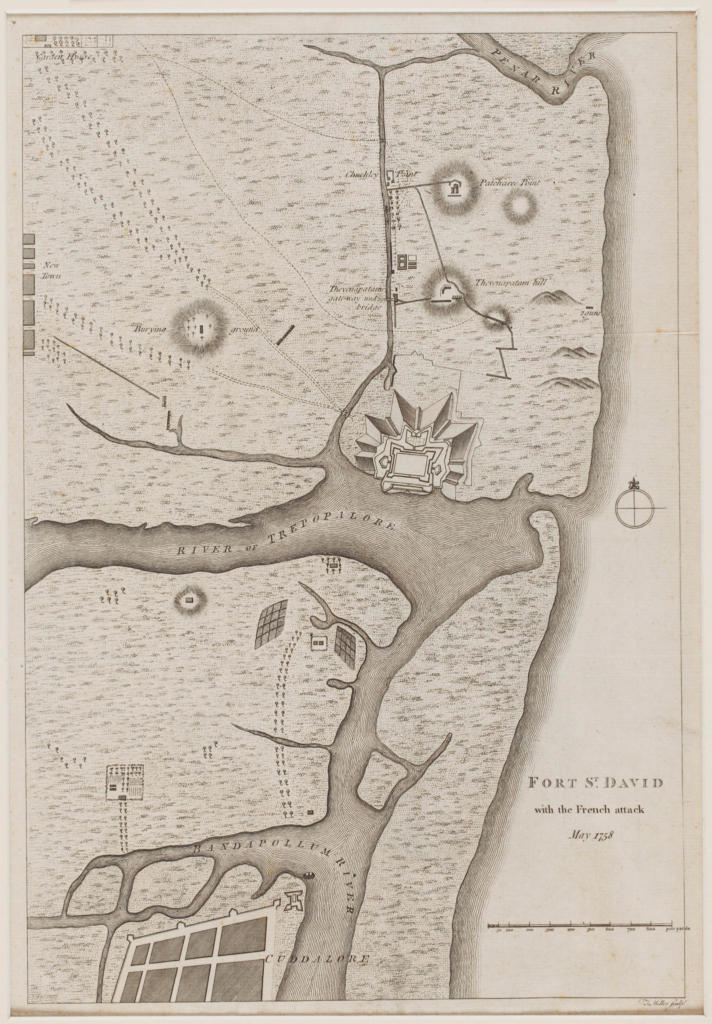 Fort St. David with the French Attack, May 1758 by Sir John Call 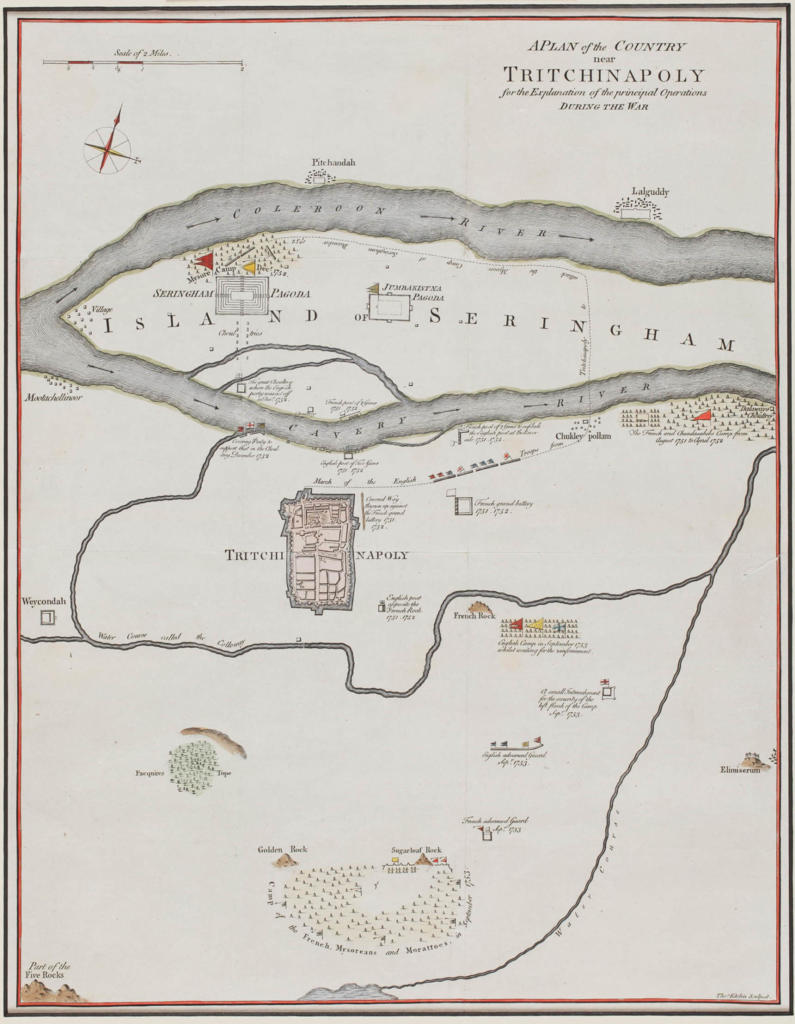 A Plan Of The Country Near Tritchinapoly For The Explanation Of The Principal Operation During The War, 1763, by Thomas Kitchin

The Carnatic Wars involved various regional kingdoms, including the Hyderabad Nizam and the Nawab of Arcot, but were ultimately a power struggle between the British and the French over dominance of the Subcontinent. This confrontation is depicted in the battle-plan above from 1763. The British would gain control of a crucial section of India after their victory in the Carnatic Wars in 1763. The combat shown here takes place in Srirangapatna (‘Seringapatam’) and Tiruchirappalli (‘Tritchinapoly’) during the Second Carnatic War (1749-1754). 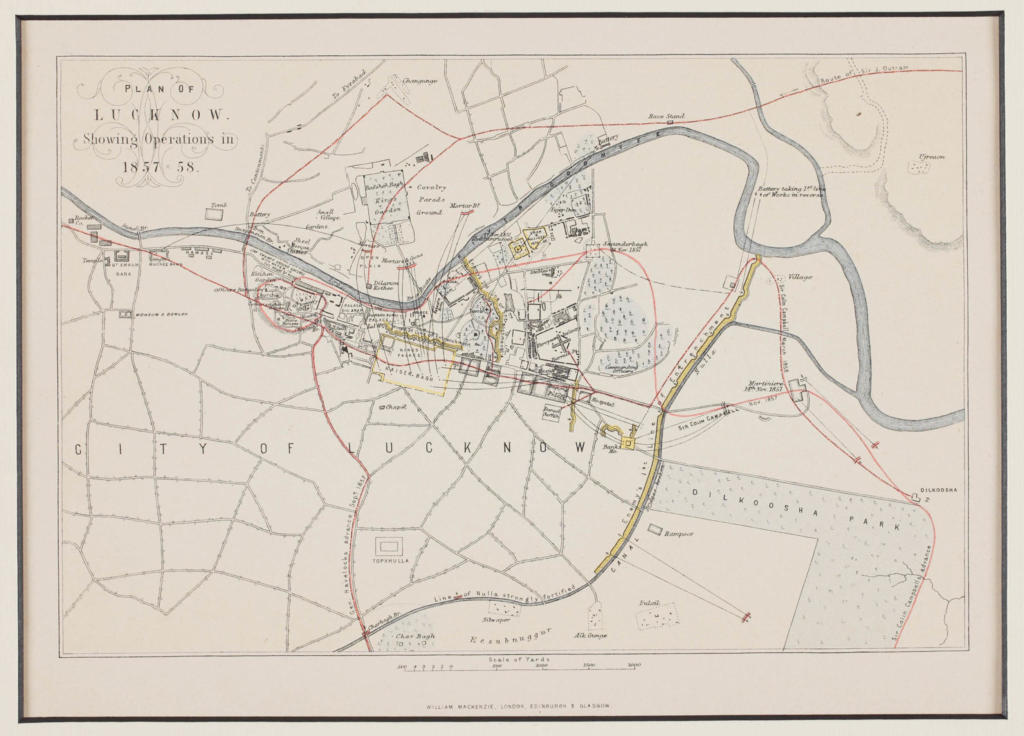 In May 1857, a native uprising (also described as Sepoy Mutiny) broke out in the East India Company’s armies and the fight by the British forces to suppress down lasted until April 1859. The Uprising was divided into five phases: the first outbreak and urgent measures; the capture of Delhi and the two reliefs of Lucknow; the re-capturing by the British of Awadh; the crushing of resistance in Central India; and finally, the ‘wiping down’ operations. In the years that followed, many maps depicting the rebels’ operations were published.

This map shows Lucknow as it stood during the Indian Uprising of 1857. In an attempt to recover the city from the rebels, the British practically destroyed it as it did Delhi. This map is presumed to have been featured in a history of the rebellion written by William Mackenzie, a Scottish printer and cartographer. The paths used by British forces to carry out relief operations are depicted here. The red lines show the routes taken by General Havelock, Colin Campbell, and James Outram, as well as the dates. The yellow lines show where mortars and guns fired against enemy lines. Kaiser Bagh, Residency, and Dilkhoosha, just a few of the city’s well-known landmarks, are also highlighted. 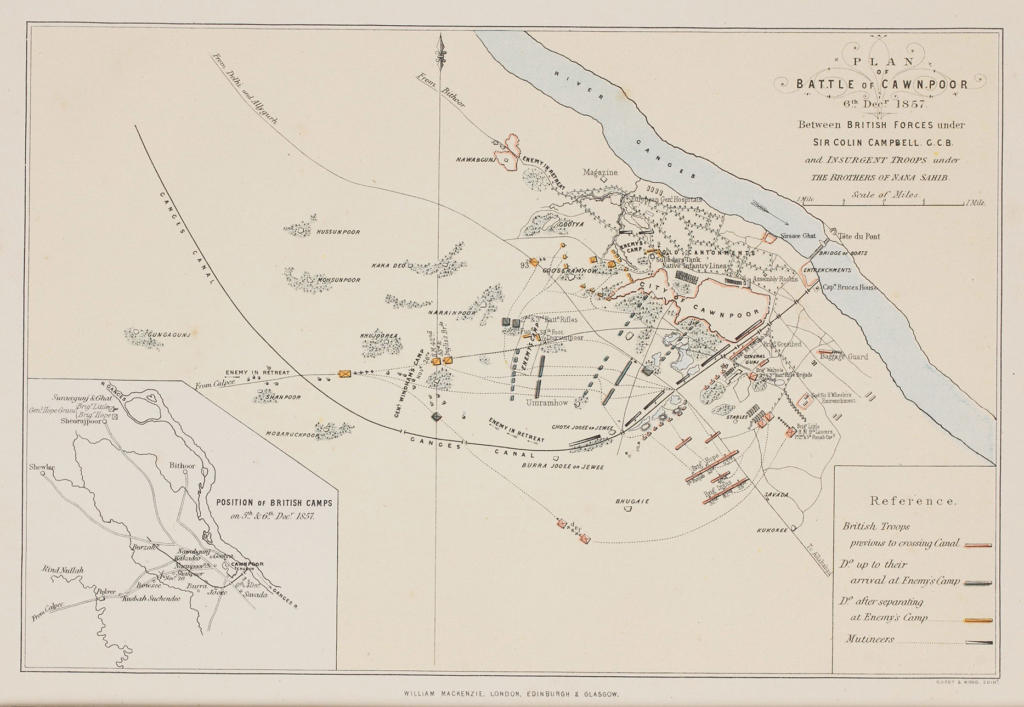 Battle Of Cawnpore; A plan for the Second Battle of Cawnpore, during the Indian Rebellion, 6th December 1857. British forces under Sir Colin Campbell defeated the Indian insurgents under Rao Sahib and Tantia Tope

Another city impacted by the revolt of 1857 was Kanpur. It was the site of a gruesome event when the city’s besieged occupants, including women and children, surrendered to the native rebels on June 27, 1857 and were massacred. British leaders made recapturing the city and avenging the massacre a key priority at the time. The city was re-captured from rebels on July 16, 1857.