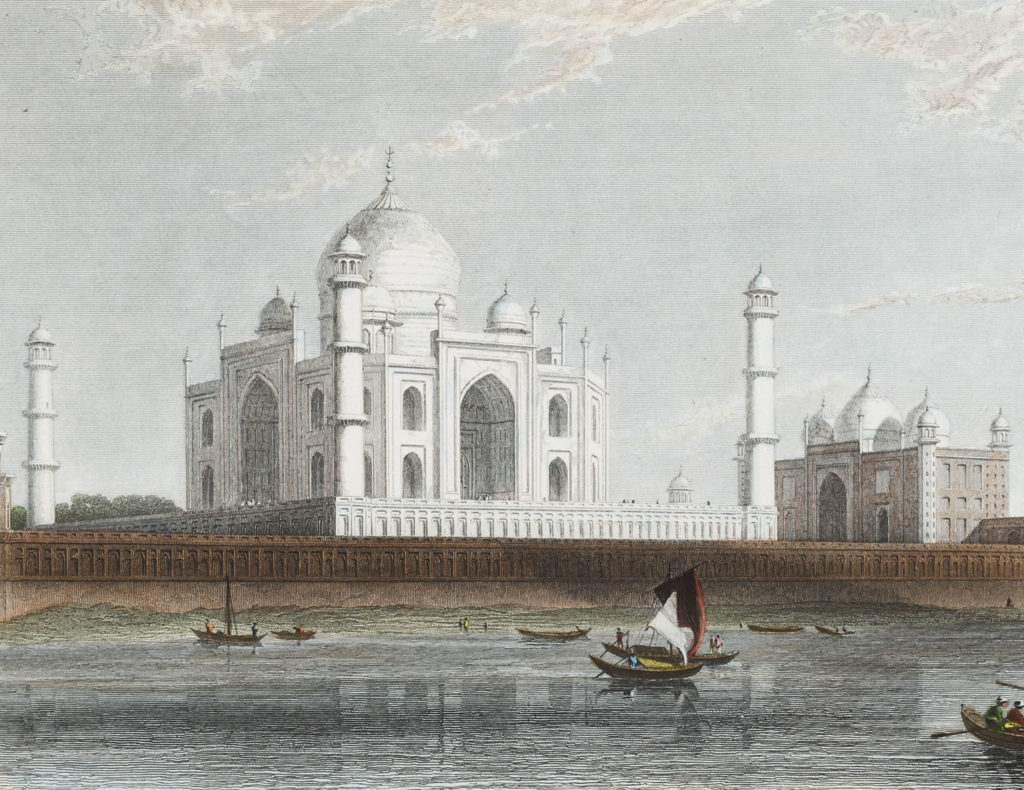 Hustlers, artists and adventurers, the Daniells worked a dream job even by today’s standards. They journeyed to exotic locations most of their countrymen had never even heard of, making art and selling it to finance further travel, which would inspire more art. Think of them as 18th-century travel bloggers. Minus the sponsored posts—unlike European contemporaries who found royal patronage, ie Johann Zoffany, Tilly Kettle and Ozias Humphry, Thomas and William Daniell had to pay their way. But their nationality did afford them the privilege of unprecedented access to the Indian subcontinent.

By the time Daniell Sr and his 15-year-old nephew reached India in 1786, the East India Company reigned more or less supreme. The battles of Plassey and Buxar had delivered Bengal and Bihar to their hands, and the once-powerful kingdoms of the Marathas and Tipu Sultan had been brought to their knees through incessant wars. The Company had established the three Presidencies of Madras, Bengal and Bombay, large regions in the south, east and west where British factories, forts and trading centres were set up. So when the Daniells applied for permission to roam the length and breadth of the country, the EIC was in a position to grant passage for most of the way. 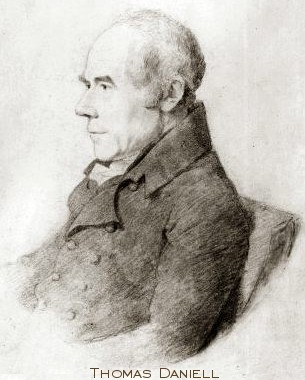 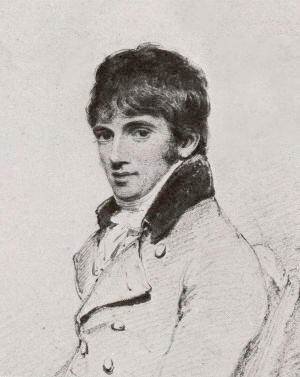 A painter and engraver of modest prospects in London, the 37-year-old Thomas Daniell was tempted by the chance to make money and find fame in India. It was a calculated bet. Oriental art was all the rage in Victorian England and the Daniells would play no small part in embellishing that theme. Immediately upon landing in the then Indian capital, the pair started working on a series of aquatints called Views of Calcutta. It took them two years and made enough money to fund their first excursion to the north. 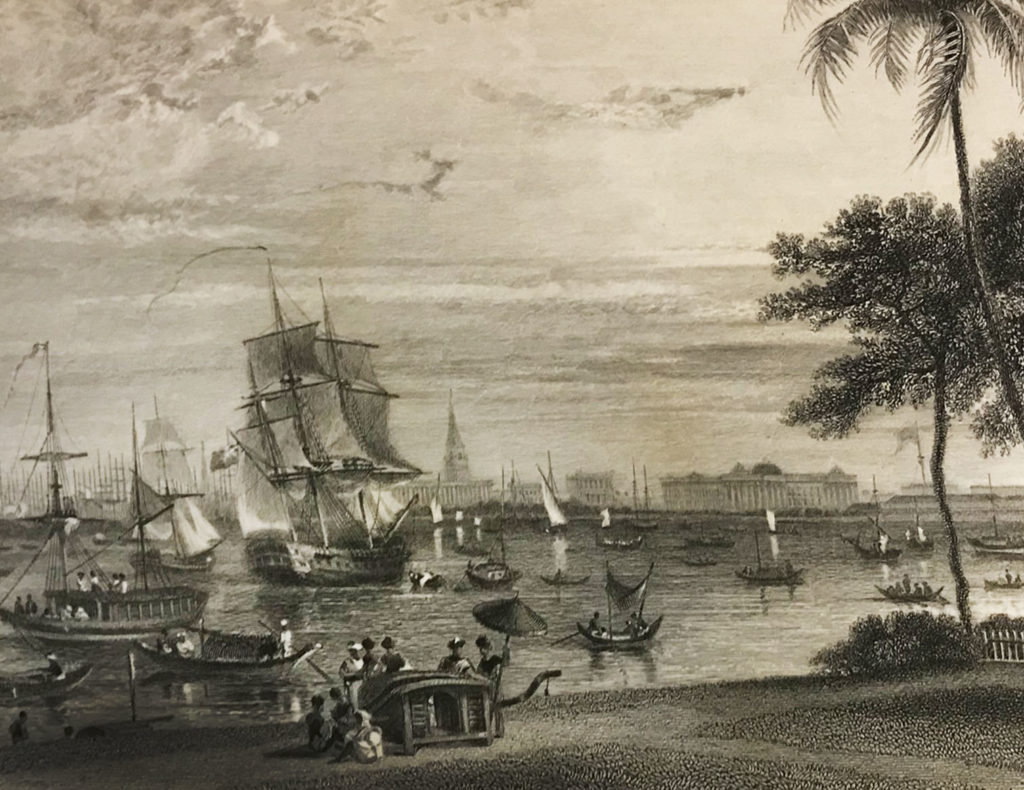 In 1788, accompanied by native workers carrying art supplies, palanquins and tents, the Daniells set off up the Ganga till they reached Kanpur. Along the way, they painted monuments and other scenes that caught their eye by the water. 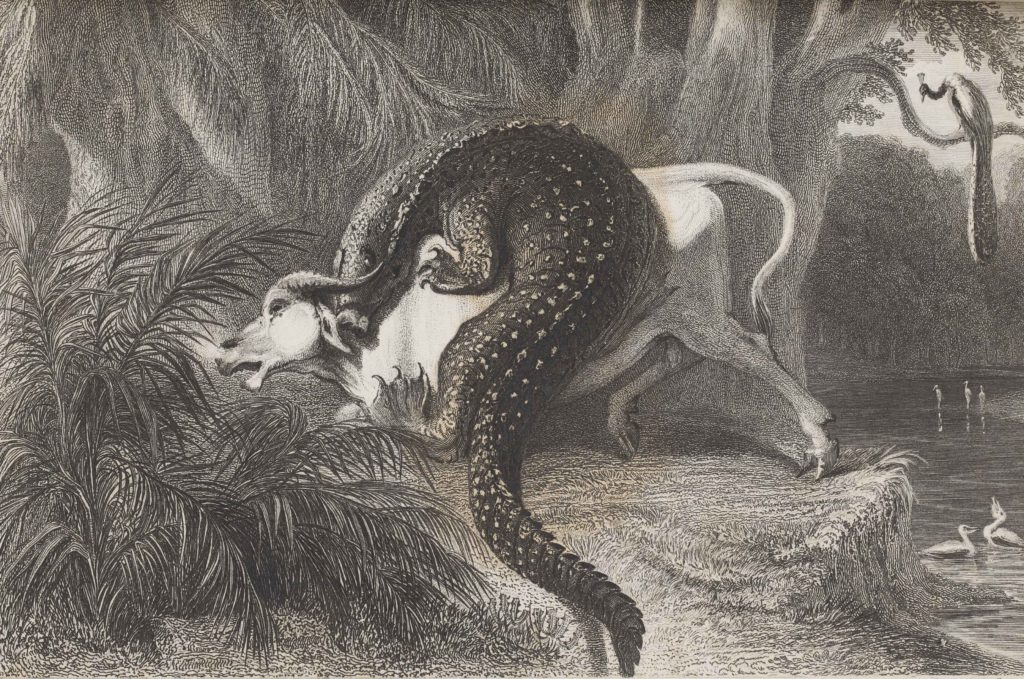 Alligator and buffalo drawn by William Daniell, The Oriental Annual

From Kanpur, the Daniells set off by land towards Delhi where they were enchanted by Mughal architecture. This leg of the journey took them through regions not under British control and marked by wars between feuding local rulers and attacks by bandits. According to British art historian Mildred Archer, “From Delhi they went northward toward the Himalayas and spent the month of April 1789 wandering through the mountains of Garhwal. They were probably the first Europeans to explore this area.” 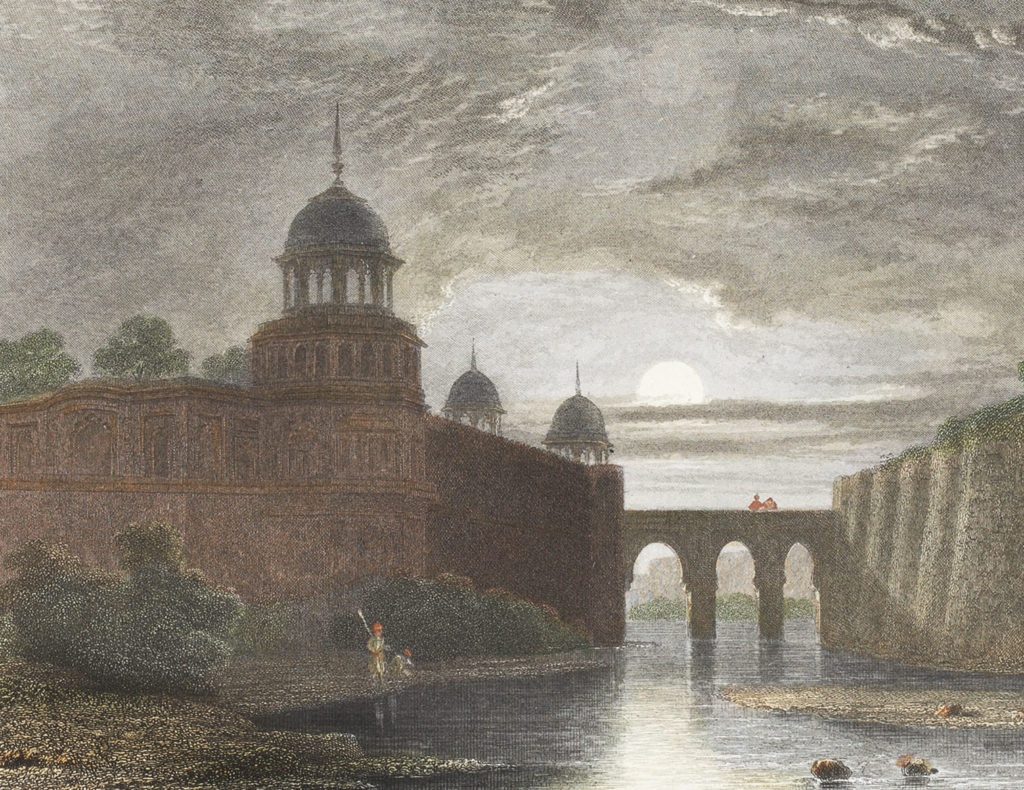 State Prison at Delhi, based on the painting of a bridge connecting Salimgarh Fort and Red Fort

After a failed attempt in Lucknow trying to interest Nawab of Awadh Asaf-ud-Daula in their work, and a few longer stops along the way at Benares and Bhagalpur, the Daniells returned to Calcutta in 1791. For four months, they stayed in the city, working up in oil paints and water colours the pencil sketches they’d made on the road.  Many of these, says Archer, were never intended to be completed and served as working notes. Initially, Thomas did all the drawing, while his nephew worked the camera obscura, prepped canvases and generally assisted the artist. As his skill grew, however, William began not only to draw but also earn a reputation as one of the finest aquatint artists of the time. 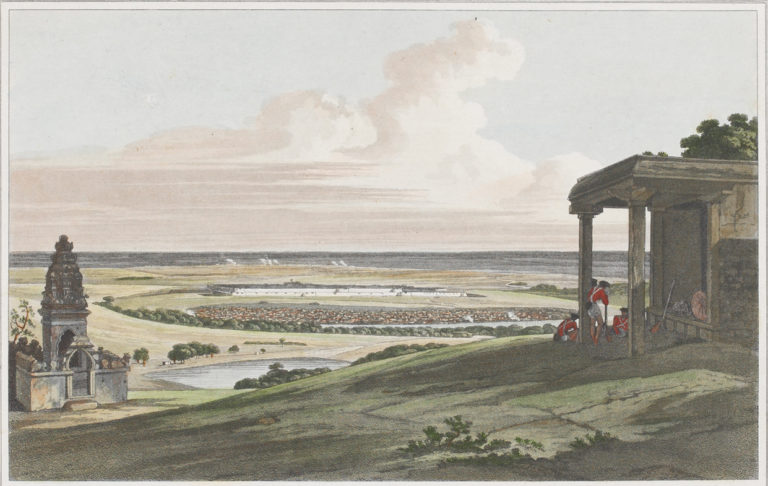 In 1792, the Daniells headed south to Madras and Ceylon (present-day Sri Lanka). Following as they were close on the heels of the Anglo-Mysore wars, the artists gave their work a topical flavour by rendering Tipu Sultan’s fallen forts in all their desolation. They were also charmed by the nobles of the south and the temple architecture of Madurai. 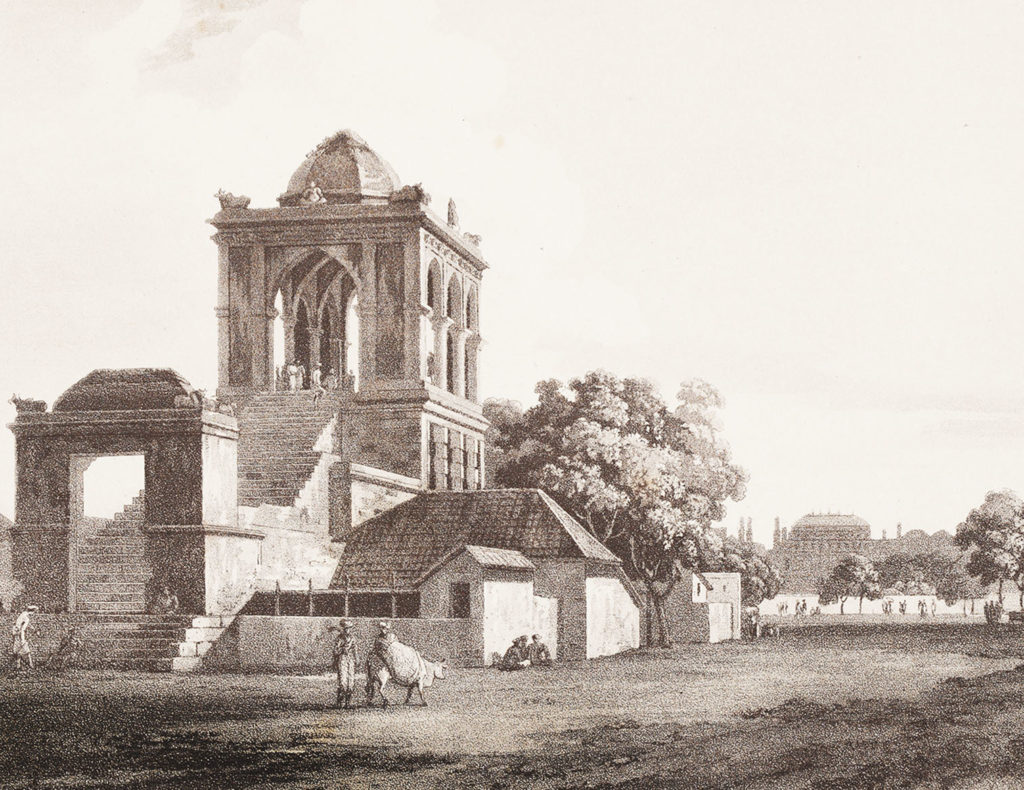 By now the Daniells had made hundreds of sketches and spent seven years in India. In 1793, when news reached that England was at war with France, they decided to head back home. As they waited for a ship from Bombay, they managed one last artistic expedition around the city and to the Elephanta and Ellora caves. 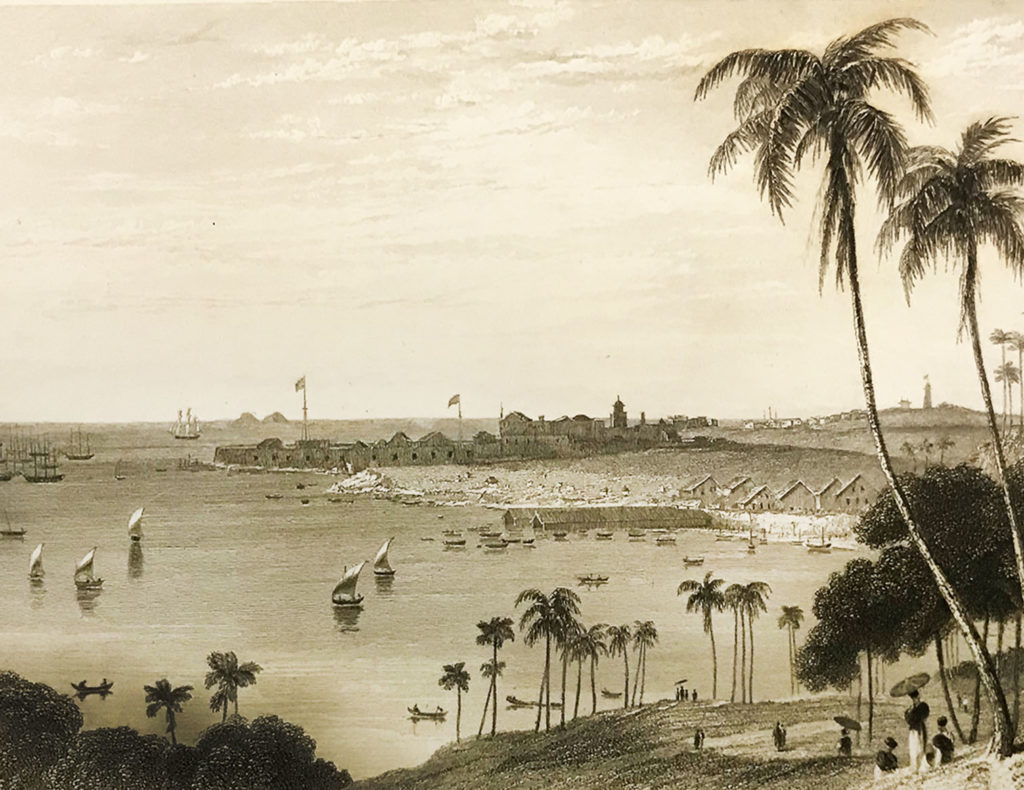 Thomas and William Daniell returned to England in 1794 and spent the next 13 years creating 144 aquatints for an ambitious book project titled Oriental Scenery. It was released in six parts and cost £210 for the set, which is about ₹16 lakh in today’s currency after accounting for inflation. Which is to say, it was the most fashionable accessory to have casually lying about your library in the early 19th century. Illustrations and engravings based on the Daniells’ art would also be published later in A Picturesque Voyage to India by Way of China and The Oriental Annual, which is part of Sarmaya’s rare books collection. 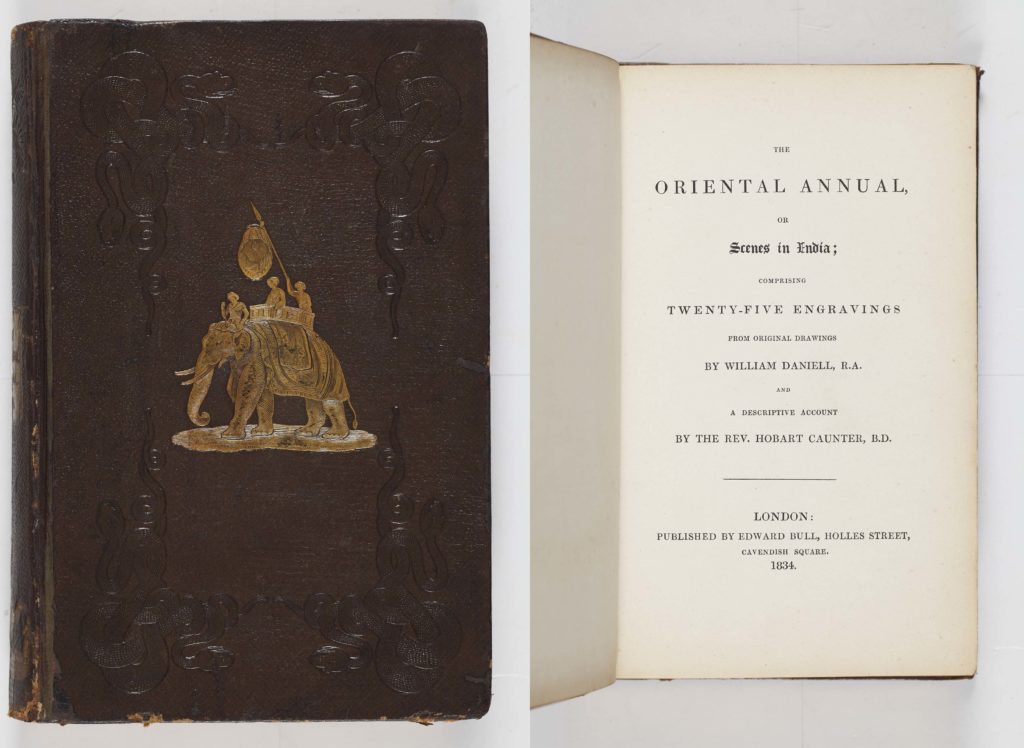 Needless to say, India changed their destiny. Both Thomas and William Daniell went on to become members of the prestigious Royal Academy of Arts and their vision of ‘the Orient’ would have far-reaching influences in the world of literature, architecture and, of course, art. Thomas came to be an authority on Moghul monuments and the temples of south India and was consulted by the leading architects and landscape designers of Victorian England.

William would turn his painterly gaze closer home to the seas and castles around England. Praising one of these later works, an art critic said: “By this time he was a comparatively wealthy man, and one can imagine him lovingly and carefully tinting the plates, leisurely savouring their subtle beauties, unhampered by time or financial worry. We feel, in looking at these aquatints, that perhaps Daniell, with the philosophy of a much-travelled man, realised that in the cool greys and greens with which he “stained” his prints was the charm of his own land, more enduring than the exotic mystery of the Orient or the strange architecture of Hindustan.”

Without Hindustan, however, the Daniells may never have found the leisure, the fame or the muse that established their legacy for generations to come.