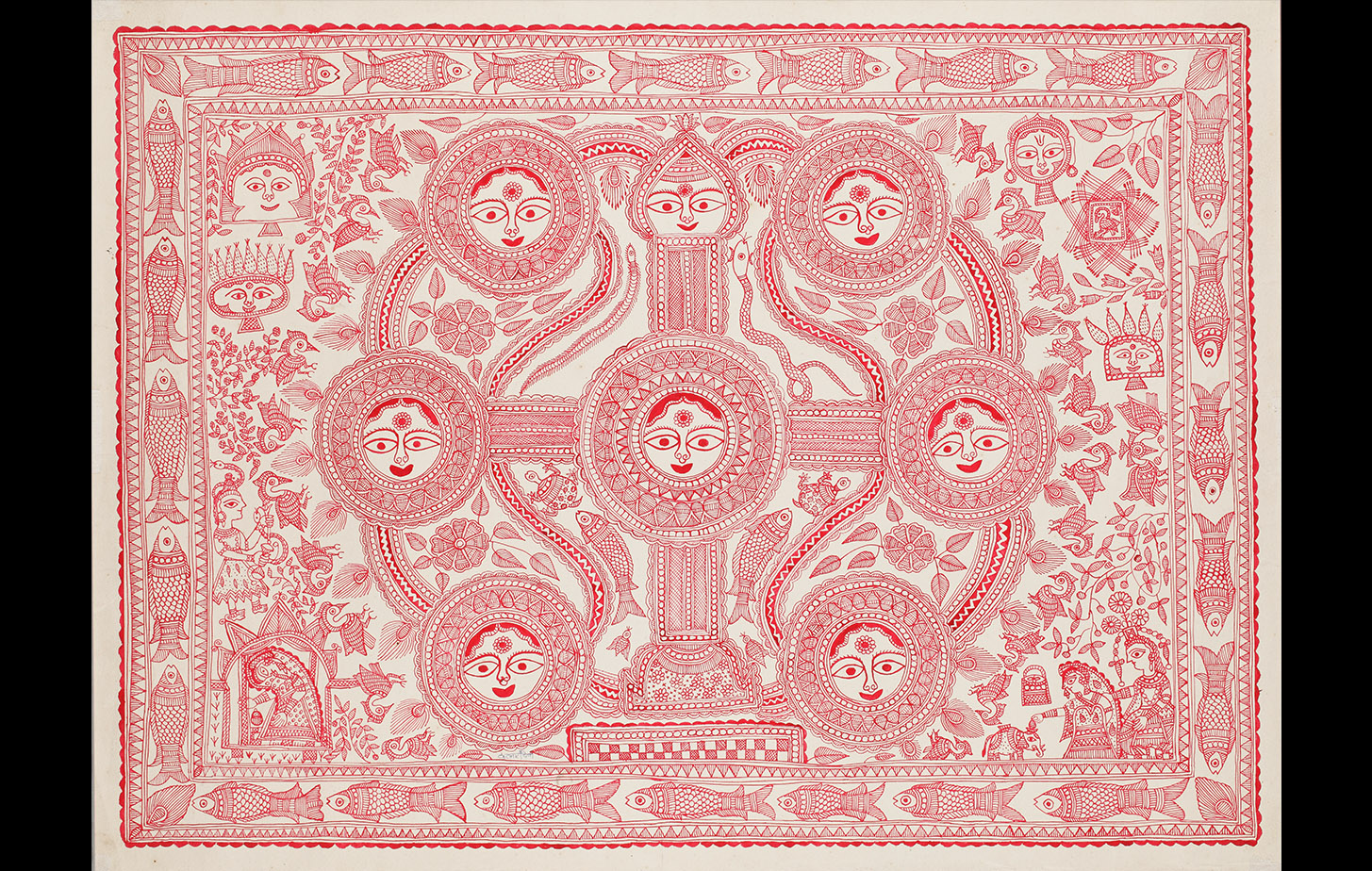 Mithila or Madhubani art originated as a ritual wall painting in Mithila region, primarily done on the occasion of marriage. Traditionally, it has been a woman’s preserve. With modern times the medium of art shifted to canvas, and on rare occasions to cloth. Depicted here is one of the most popular and iconic of these ritual paintings called the ‘kohbar’ or the ‘puren’. These were originally painted in the ‘kohbar ghar’ or the nuptial chamber where the bride and groom consummate their marriage. This room in which the married couple spends their first four nights is the most vibrantly painted section of the house. Renditions of kohbar as named by the Kayasthas usually showcase faces inside the rings of the lotuses. A long vertical object that pierces through the central ring of the lotus also appears, and at the top end of this vertical object a face similar to that of the rings is seen.

This object is meant to represent the stem which roots the lotus leaves at the bottom of the pond. The lotus is symbolic of a woman’s fertility, a symbol of plenty adopted from the many local ponds covered with such flowers from edge to edge in the monsoon. The pond becomes a source for other symbols of plenty as well like fish, a symbol of fertility, the tortoise, a symbol of love, and snakes, symbols of divinity. They appear in and around the composition of kohbar, visible in this painting as well. In several instances, the moon, sun and other idols are drawn nearby; these are described as witnesses to the act of marriage. As wall paintings the rendition of puren would be surrounded with paintings of deities, who too serve as witnesses to the auspicious event of the first night of marriage. The image of Durga would find the centre stage in the kohbar ghar.

Dulari Devi wasn’t always an artist. She belongs to a fishermen’s community known as the Mallah community and initially worked as a housemaid for a National Award-winning Mithila artist, Mahasundari Devi. Her artistic journey began with her asking Mahsundari Devi whether she could learn how to paint too. Dulari Devi takes forward the legacy of her mentors Mahasundari and Karpuri Devi. With her practice, she has transformed Madhubani and expanded its colour palette beyond primary colours. She has also published an award-winning biography along with the collaborative efforts of Gita Wolf, called ‘Following My Paintbrush’. She aims to work on the education of children in the Mallah community with the help of her artwork. Dulari Devi is also a master painter and instructor at the Mithila Art Institute. She received the state of Bihar Award for excellence in art in the year 2013.