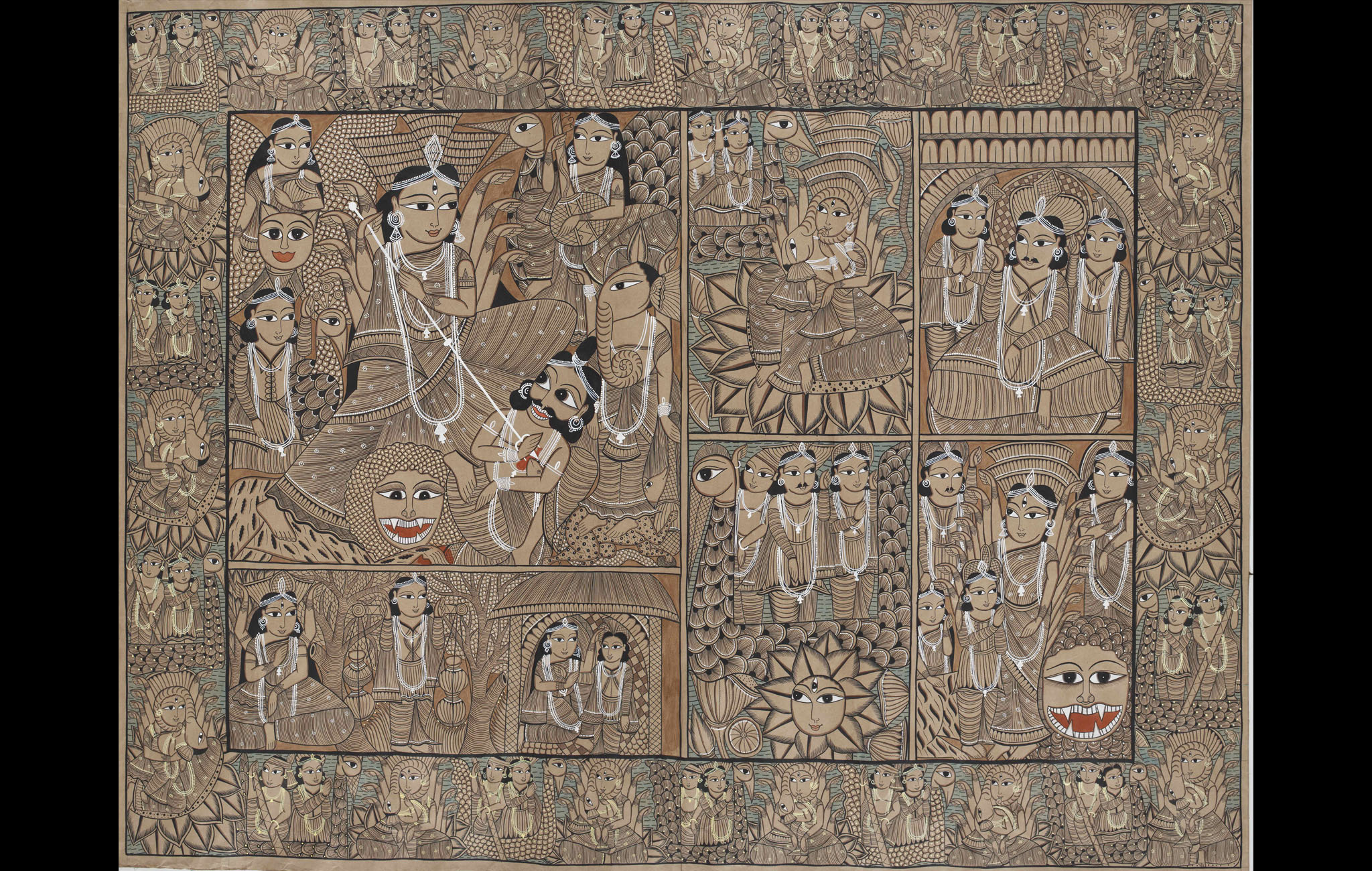 The Bengal Pattachitra is a visual and oral art tradition practised by the Patuas or Chitrakars of West Bengal. They earn their livelihood by telling stories from Hindu Mythology, local folklores, Sufi tradition and contemporary themes through paintings and songs. The unfolding or playing of the Pata is called ‘Pat Khelano’, and the song through which the divinely painted narratives are sung is called ‘Pater Gaan.’ This flows in 3 stages – the kahani (story), the mahatmya (glory), and bhavita (introduction).

Based on ‘Chandi Mangal Kavya‘ by the poet Mukundaram, this Durga Pata narrates two stories that revolve around the worship of the Goddess Chandi, avatar of Durga.

On the left, the first panel follows the story of Indra’s son Nilambar who is cursed and reborn as Kalketu, a member of an outcast hunter community.  Nilambar’s wife, Chaya, is born as Phullara, wife of Kalketu. Goddess Chandi, bestows great wealth on the pair, asking them to cut down the forest and create a kingdom where she is greatly worshipped. Once the deed is performed, Kalketu returns to heaven as Nilambar.

The second panel, on the right, tells the story of a rich, upper class and staunch Shaivite merchant called Dhanpati Saudgar. A dancer at Indra ‘s court is sent down to earth because of a curse as Dhanpati’s wife Khulana in his polygamous marriage. Khulana is treated badly by Dhanpati’s first wife Lahana. Consequently,  Khulana starts worshipping Goddess Chandi. Dhanpati, being a Shaivite, rejects her faith and equates it to the likes of witchcraft or sorcery. The Goddess, furious at his conduct, drowns his merchant ships and imprisons him. The son of Khulana, Sripati, who is a devout worshipper of the Goddess, saves the life of Dhanpati. This incident reinforces Dhanpati’s confidence in the power of the Goddess. Recognizing his arrogance in discriminating between Shiva and Parvati, he begins to worship the Goddess.

Created in the tones of brown, white and black, and with a descriptive borderline featuring characters from both the stories, this Durga pata includes different forms of the Goddess – Mahishasura Mardini killing a demon while standing on her lion, Parvati with Ganesh, and Goddess Saraswati with her veena.

To read more on the Bengal Pattachitra, click here.

Pigments on paper pasted on cloth