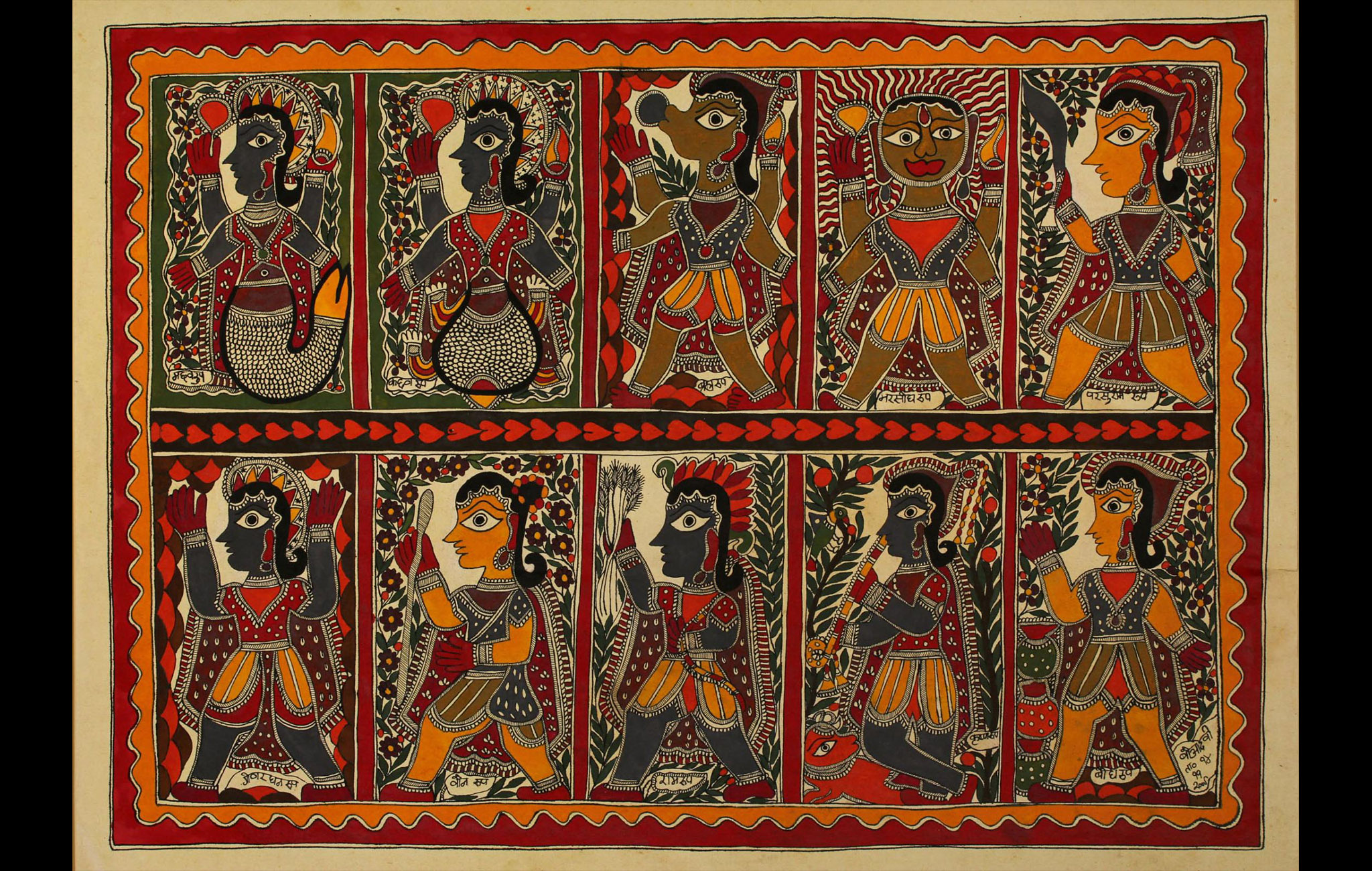 This Madhubani painting is thematically religious. It showcases the dasavatars or ten incarnations of the Lord Vishnu. The incarnations are divided in small rectangles in two rows, making it a miniature of how these images would appear on the traditional wall paintings when painted almost life size. The figures are named by the artist in devnagari below the painting, in the order: Matsya, Kurma, Varaha, Narasimha, Parshuram, Govardhan Krishna, Balrama, Ram, Krishna, Buddha. Krishna being an important deity in Mithila is depicted twice in this rendition.

The incarnations are easily identifiable by their features. For example, Varaha is shown with a boar face holding a circular shaped earth, Krishna is shown with a flute etc. To fill up the empty spaces bales of leaves and flowers are painted, a decorative signature of the later painting of artist Baua Devi. The two rows are divided by a midline that has heart shaped motifs and the entire painting is bordered with a red and orange flowing pattern. Baua Devi’s borders are known to have something that’s always new and quirky.

Baua Devi was only a teenager in the sixties, when a Mumbai artist called Bhaskar Kulkarni visited her village, Jitwarpur. Encouraged by him, the women and girls of the community learned how to transfer their artistry from the walls to paper. Baua was part of a pioneering generation of Madhubani artists who would make that shift. Baua Devi uses modern motifs (notice the red hearts in the painting above) and topical issues to make her canvases brim with urgency and life. There is a strong feminist perspective to Baua Devi’s work, whether she’s depicting the raw power of Kali’s roar (below) or articulating the interior life of the Nag Kanya, a creature with the head and torso of a woman and the lower body of a snake.

Baua Devi won the National Award in 1984 and became the sole Mithila artist—and sole Indian woman—to show at the seminal 1989 show, Magiciens de la Terre. Today, every serious collection of indigenous Indian art carries her work and her paintings have travelled to shows in the USA, Spain, France and Japan. In 2017, she brought home to her village its third Padma Shri—Jitwarpur now holds a record in the country for most Padma awards won. At 75, Baua Devi is no longer as prolific as she once was but like her mother-in-law before her, she’s passed the baton on to her daughter-in-law and many of Bihar’s young aspiring artists.

Acrylic on paper posted on mountboard