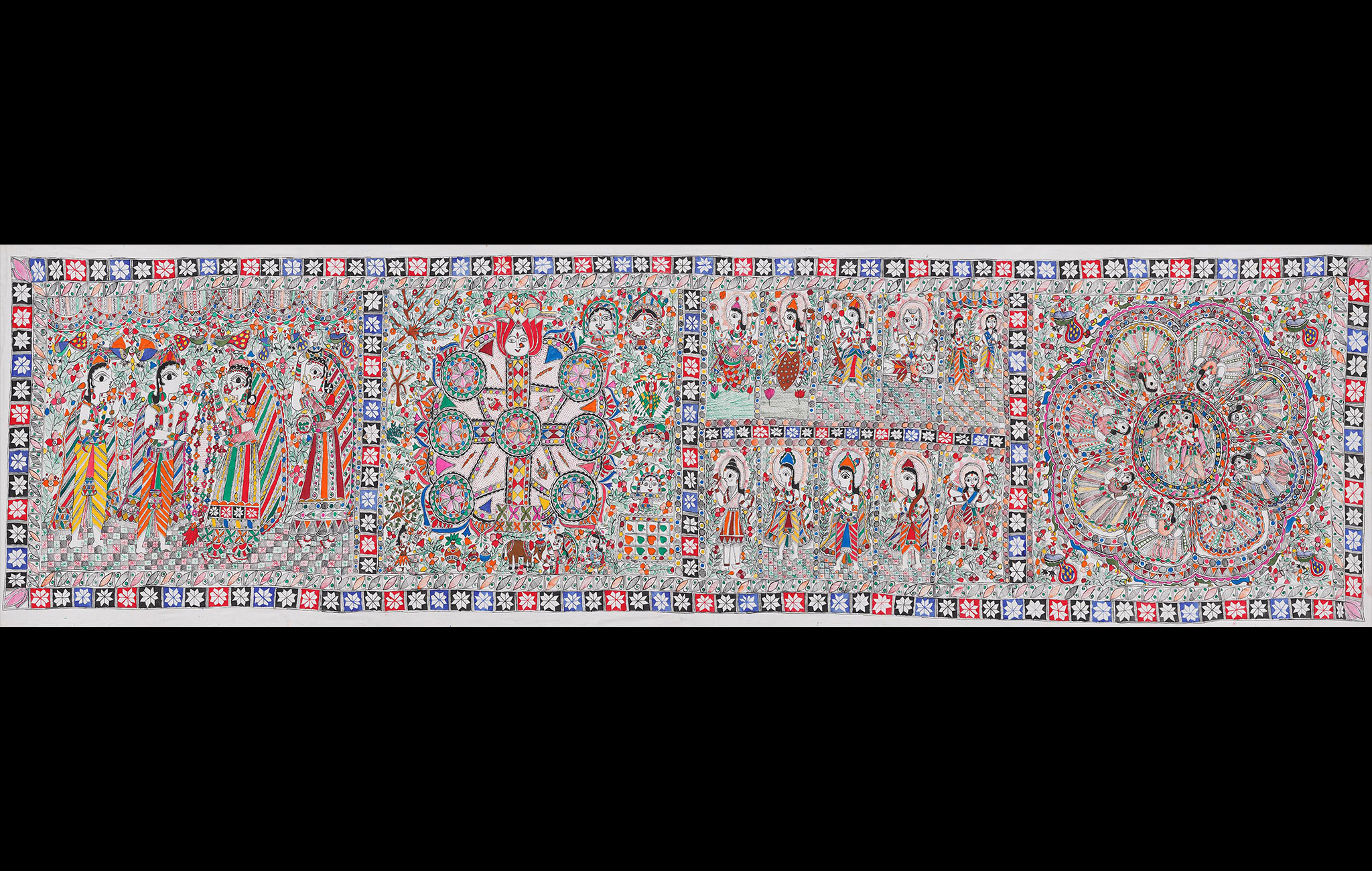 Mithila or Madhubani art originated as a ritual wall painting in Mithila region, primarily done on the occasion of marriage. Traditionally, it has been a woman’s preserve. With modern times the medium of art shifted to canvas, and on rare occasions to cloth. Depicted here is one of the most popular and iconic of these ritual paintings called the ‘kohbar’ or the ‘puren’. These were originally painted in the ‘kohbar ghar’ or the nuptial chamber where the bride and groom consummate their marriage. This room in which the married couple spends their first four nights is the most vibrantly painted section of the house.

Puren, as it is called by the Brahmins literally means lotus leaf. The drawing is a representation of lotus flowers or water lily flowers arranged in circular fashion which give them a geometrical or an abstract look. The lotus is symbolic of a woman’s fertility, a symbol of plenty adopted from the many local ponds covered with such flowers from edge to edge in the monsoon. The pond becomes a source for other symbols of plenty  like the fish, a symbol of fertility, the tortoise, a symbol of love, and snakes, symbols of divinity. They appear in and around the composition of puren. In several instances, the moon, sun and other idols are drawn nearby; these are described as witnesses to the act of marriage. As wall paintings the rendition of puren would be surrounded with paintings of deities – who too serve as witnesses to the auspicious event of the first night of marriage. The image of Durga would find the centre stage in the kohbar ghar. All such images were separated by the use of a floral border much like the cloth rendition seen here.

This painting is horizontally oriented and divided in four parts through the use of floral borders. On the leftmost episode of Rama and Sita’s marriage is depicted, to its right the traditional motif of ‘Kohbar’ or ‘Puren’ are depicted (an abstract representation of a lotus), to its right a ten incarnations of Vishnu are represented in order, and in the last panel Krishna Leela scene is depicted, the figures appear inside a flower motif.