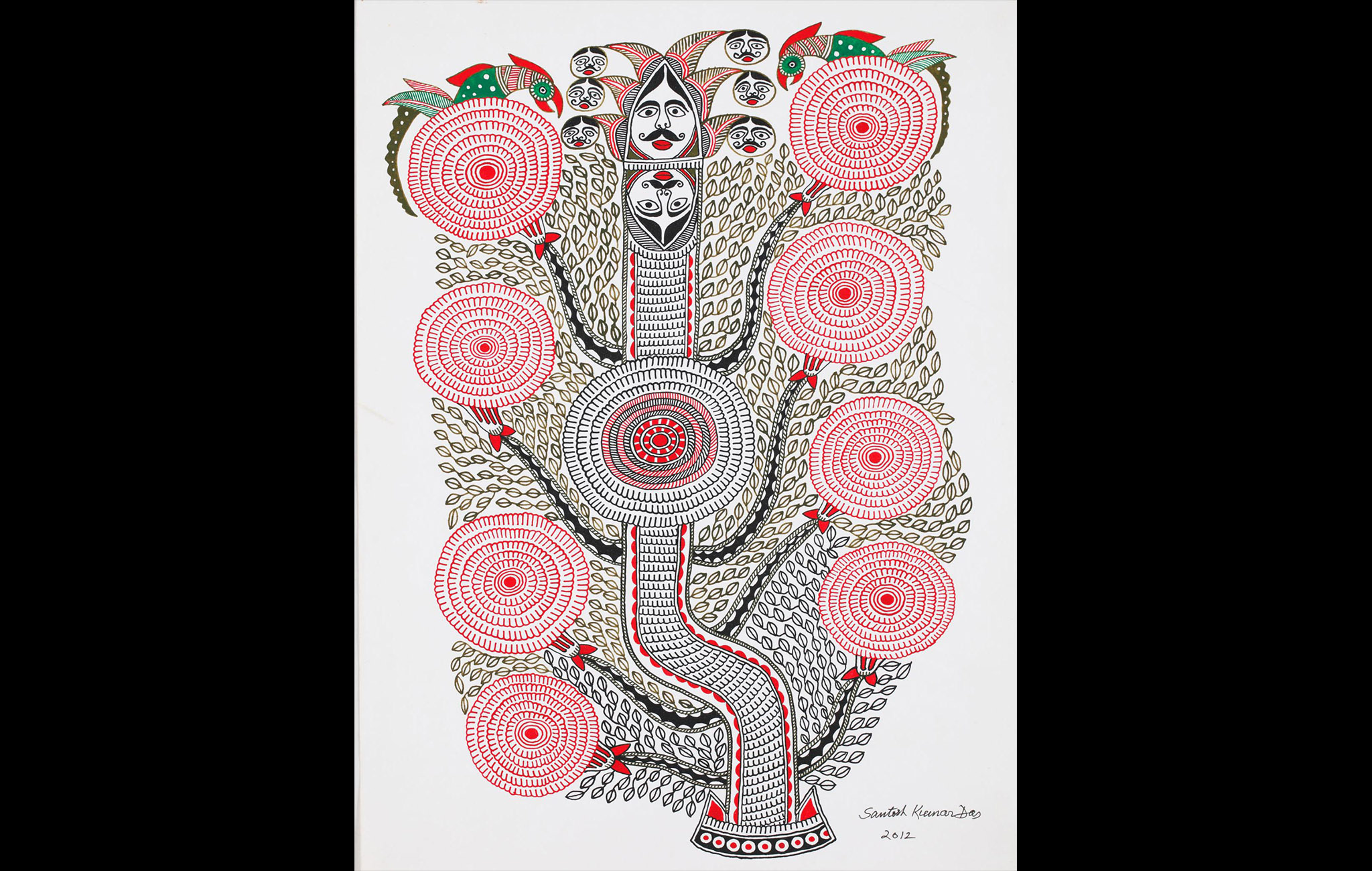 Mithila or Madhubani art originated as a ritual wall painting in Mithila region, primarily done on the occasion of marriage. Traditionally, it has been a woman’s preserve. With modern times the medium of art shifted to canvas, and on rare occasions to cloth. Depicted here is one of the most popular and iconic of these ritual paintings called the ‘kohbar’ or the ‘puren’. These were originally painted in the ‘kohbar ghar’ or the nuptial chamber where the bride and groom consummate their marriage. This room in which the married couple spends their first four nights is the most vibrantly painted section of the house.

Renditions of kohbar as named by the Kayasthas usually showcase faces inside the rings of the lotuses. A long vertical object that pierces through the central ring of the lotus also appears, and at the top end of this vertical object a face similar to that of the rings is seen. This object is meant to represent the stem which roots the lotus leaves at the bottom of the pond. The lotus is symbolic of a woman’s fertility, a symbol of plenty adopted from the many local ponds covered with such flowers from edge to edge in the monsoon. Another interpretation of this vertical object is that it represents phallus, thus the male and female fertility symbols being depicted in unity. It represents the very act of consummation. Usually several animals are depicted in the rendition, particularly the ones that are found in the Mithila ponds. The pond becomes a source for other symbols of plenty as well like fish, a symbol of fertility, the tortoise, a symbol of love, and snakes, symbols of divinity. They appear in and around the composition of Kohbar. Along with these the moon, sun and other idols are drawn nearby; these are described as witnesses to the act of marriage.

This contemporary painting of the ‘Kohbar’ is devoid of any such representations, except for two peacocks on the topmost rings. The rings appear in zigzag instead of a circular fashion interspersed with small leaves branching out from the vertical object. The head of the vertical object has two faces which look like mirror images of each other drawn on a flat surface. The face on top wears a joker’s cap, the tassels of which have rather funny looking winded round faces. Another aspect that breaks away from tradition is that the faces with their proud curled moustaches are male instead of female. The joker cap juxtaposed with the plain expressions of the faces may be a satirical jibe at patriarchy.

This painting is made by contemporary artist Santosh Kumar Das. Born in Ranti, Madhubani district of Bihar, he was exposed to the artform since childhood. His mother painted ritualistic Khobar compositions on paper, and his aunts Karpoori Devi and Mahasundari Devi experimented with narrative topics. Today, Das is considered to be one of the most prominent figures in contemporary Mithila art. Unlike most other Madhubani artists, Santosh Kumar Das is trained in both Indian and Western painting traditions.