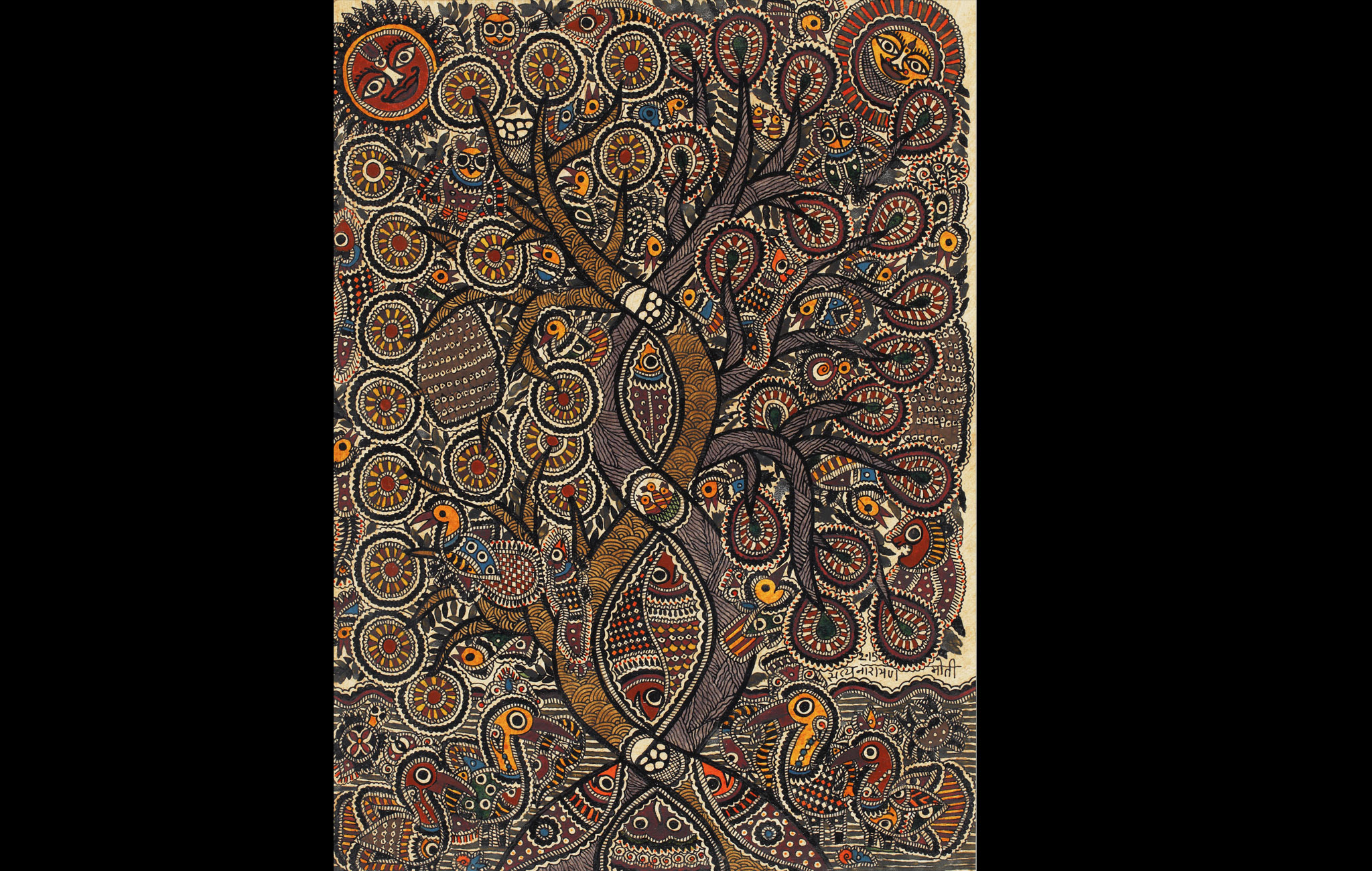 The theme of the painting is based on a philosophical concept known as the ‘Tree of life’. This concept elevates the symbol of the tree to a sacred one, which is respected and worshipped all over the world, Buddhism, Hinduism, Christianity, Islam, Judaism.

The symbol has been found sculpted or painted in relics of ancient civilisations and till today continues to be an inspiration for modern artists. In some texts it is revered as a symbol for the universe itself, the existence of which makes this planet conducive to our birth and sustenance. In others, it is seen as a symbol of wisdom and knowledge, the entity that stands firm through time with a memory of all of mankind’s history.

The symbol of ‘tree of life’ is found in abundance since time immemorial and it is no surprise that they are depicted in an artform that is heavily inspired by natural motifs- Madhubani painting. Madhubani has been a prominent region in the learning and growth of both Buddhism and Hinduism.

In Buddhism, a peepal tree at Bodh Gaya is considered as the tree where Siddhartha awakened through meditation and gained enlightenment, becoming Sakyamuni Buddha. In Hinduism, a peepal tree under which Krishna passed away is known as the tree which embodies the entire cosmos. This tree is called Ashwatha, literally translates as: ‘ashwa’ meaning infinity and ‘tha’ meaning one that remains. The peepal tree according to Hindus has eternal life and harmony. It regenerates through yugas and is considered a kalpavriksha, wish-fulfilling tree.

Madhubani paintings showcase both the Bodhi tree and the Ashwatha in their paintings, though the latter is more frequently seen. The bountiful tree is the focal point of the composition, surrounded by several birds and animals that reap the benefits. The peacocks mostly are seen in almost every painting because they represent divine love and companionship, closely attached to the ritual art of Mithila wall paintings.

Artists Satya and Moti belong to the ‘Kayastha Karn’ caste– traditionally the chroniclers of stories, but the duo paint in both the kachni and bharni (Brahmin) styles. They jointly received the National Award for their combined efforts in preserving and taking forward the art of Mithila painting, in 2003. Satya and Moti together developed their own unique style of painting that involved the use of fine-line detailing that densely covers the entire composition of their paintings. Satya Narayn passed away in 2015, at the age of 63.

Moti Karn continues to paint in both their names as a tribute to her husband. Moti Karn has made several paintings on religious and secular subjects, she says that she uses the traditional two-line border in her work as it is considered the parallel lines of Shiv and Shakti. She draws the eyes of the deities at the very end of the painting process, as it is believed that once the eyes are painted, the atma or the soul of the deity enters the painting.

Ink and Tempera on Paper