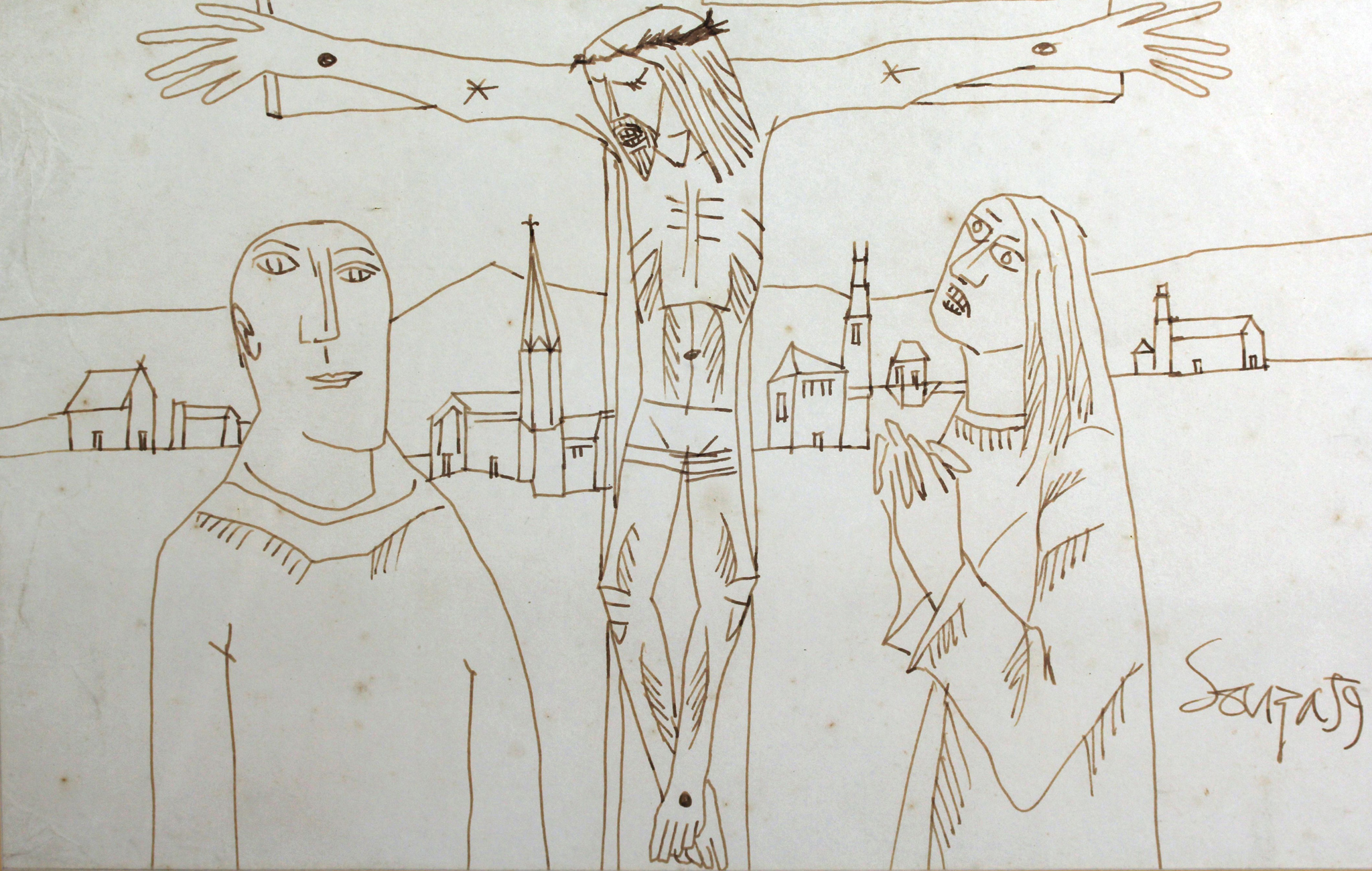 This drawing delineates the Biblical tragedy of the crucifixion of Christ. This is one of many compositions of the crucifixion done by the modern artist Francis Newton Souza. FN Souza, a founding member of the Progressive Artists Group (PAG Mumbai, 1947), in many ways shaped the Modern Art movement in India. He explored subjects like sexual interaction between men and women, the female nude, and Jesus Christ – subjects that were rare in India at the time. Souza was one of the first few expressionist artists in India and he achieved mastery in the distortion of line to elicit emotions of anger, frustration, grief and tragedy.

Here, he employs the same technique, using lines minimally for the same effect. In the centre we see Jesus on the cross, wearing a crown of barbed wire and marked with crisscross lines that emphasize the fragility of his body. His head is tilted downward and his eyes are showcased closed, adding to the sense of doom. On either side we see two figures – a man and a woman. The man remains plain and indifferent, while the woman showcases grief with her hands folded together as she looks up at Jesus. The background remains empty with only a few monuments and hills visible. The calm atmosphere in the background creates a contrast to the tragedy in the foreground, therefore highlighting it.

Souza was a Goan Catholic. He travelled to Mumbai to pursue his art education from the Sir JJ School of Arts in Mumbai. However, he was expelled due to his participation in the Quit India Movement. In 1947, after independence, he founded the Progressive Artists’ Group along with his other contemporaries SH Raza, MF Hussain and KH Ara, among others. His art very profoundly expresses emotions and creative depth through abstracted human forms. In his religious themed paintings he has clearly focused on suffering rather than spirituality. On his paintings, he remarked, “Renaissance painters painted men and women making them look like angels. I paint for angels, to show them what men and women really look like.” In 1967 he moved to New York City after receiving the Guggenheim International Award. Souza’s works have been a part of several collections and exhibitions all throughout India and abroad. F.N.Souza passed away in March 2002.