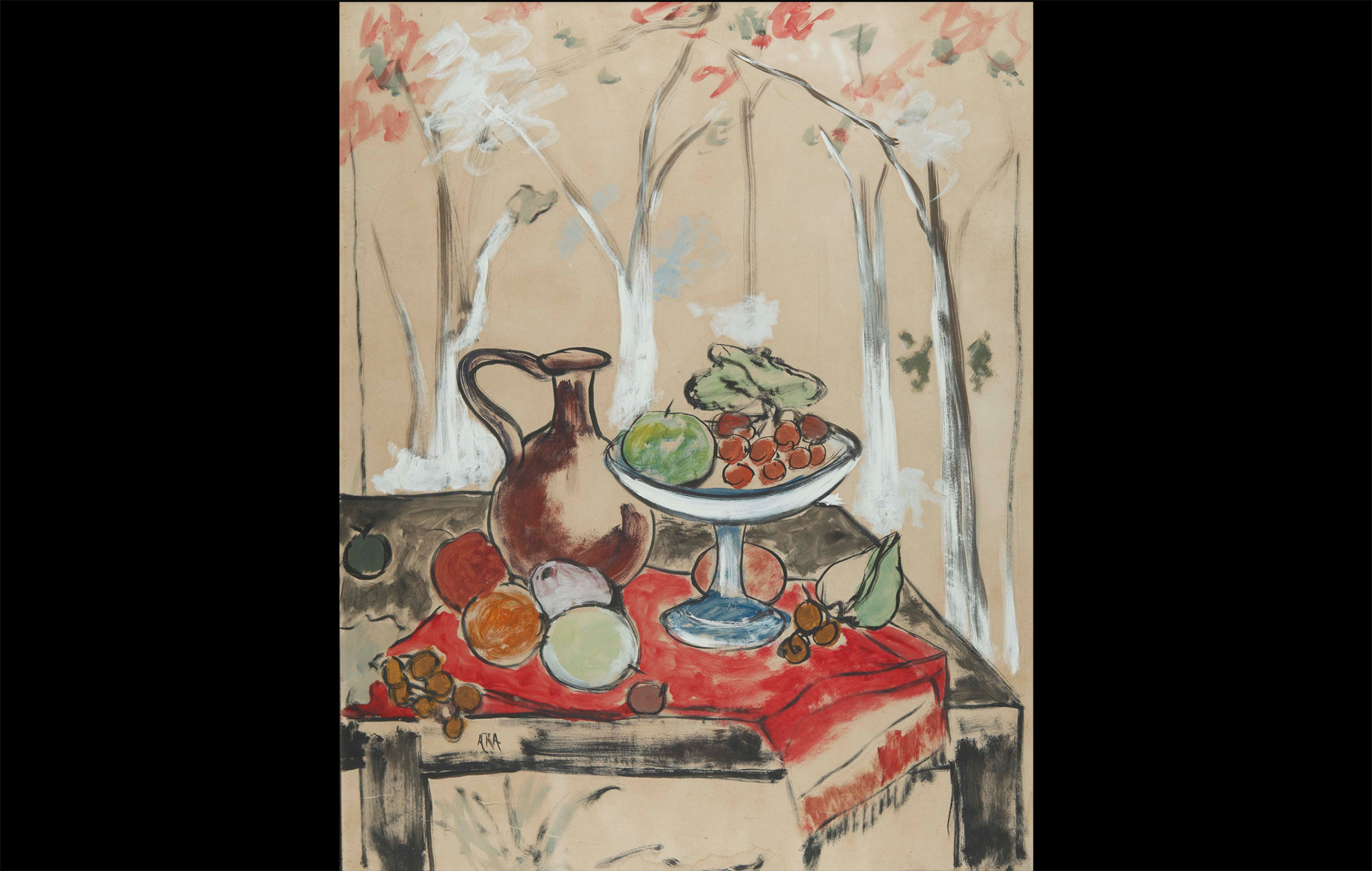 KH Ara’s still-life compositions were all his own, untouched by the shadow of the looming figures of western still-life like Rembrandt or Cezanne. As with everything else, Ara crafted his own style and technique even with this form. Here, he uses techniques that create an illusion of perspective. The fruits, the table and the tablecloth are painted to be dark and bold in order to show their closeness to the viewer. However, the trees in the background are painted rather faintly and hurriedly in order to show their distance from the table. It can be observed that not every fruit or jug represented on the table is fully coloured in. Some of the fruits are coloured with just a single shade, whereas others have some evidence of light and shadow because of the use of white paint. The shine on the fruit stand and the shadow on the water jug are brought about in the same way. Ara also smoothly balances the various colours in his compositions, and here he has repeated the red from the tablecloth – in the flowers in the trees in the background. He leaves large sections of the table and the background unpainted, in order to create an effect that forces the viewer to only focus on what is essential in the composition. The hurried brush-strokes urge you to consider the value of time.

Born in 1913 in Andhra Pradesh, KH Ara did not receive any formal training or art education. He was a completely self-taught artist. Ara was the son of a chauffeur, and only moved to Mumbai when he was seven years old. Ara joined the salt Satyaghraha Movement led by MK Gandhi during India’s independence struggle. He initially cleaned cars for a Japanese company, and only much later in life was encouraged to paint as a profession, by an art critic from The Times of India named Rudy von Leyden. She recognized the potential in the sketches he made during his spare time. Ara then went onto become one of the founding members of the Progressive Artists’ Group in Mumbai, Ahmedabad, Calcutta and Baroda (1948-1955). He participated in several solo-shows in Mumbai as well. Ara has exhibited his works extensively all across Europe and Japan. He has received several honors and accolades, including the prestigious Governor’s Award. Ara passed away in Mumbai in 1985.