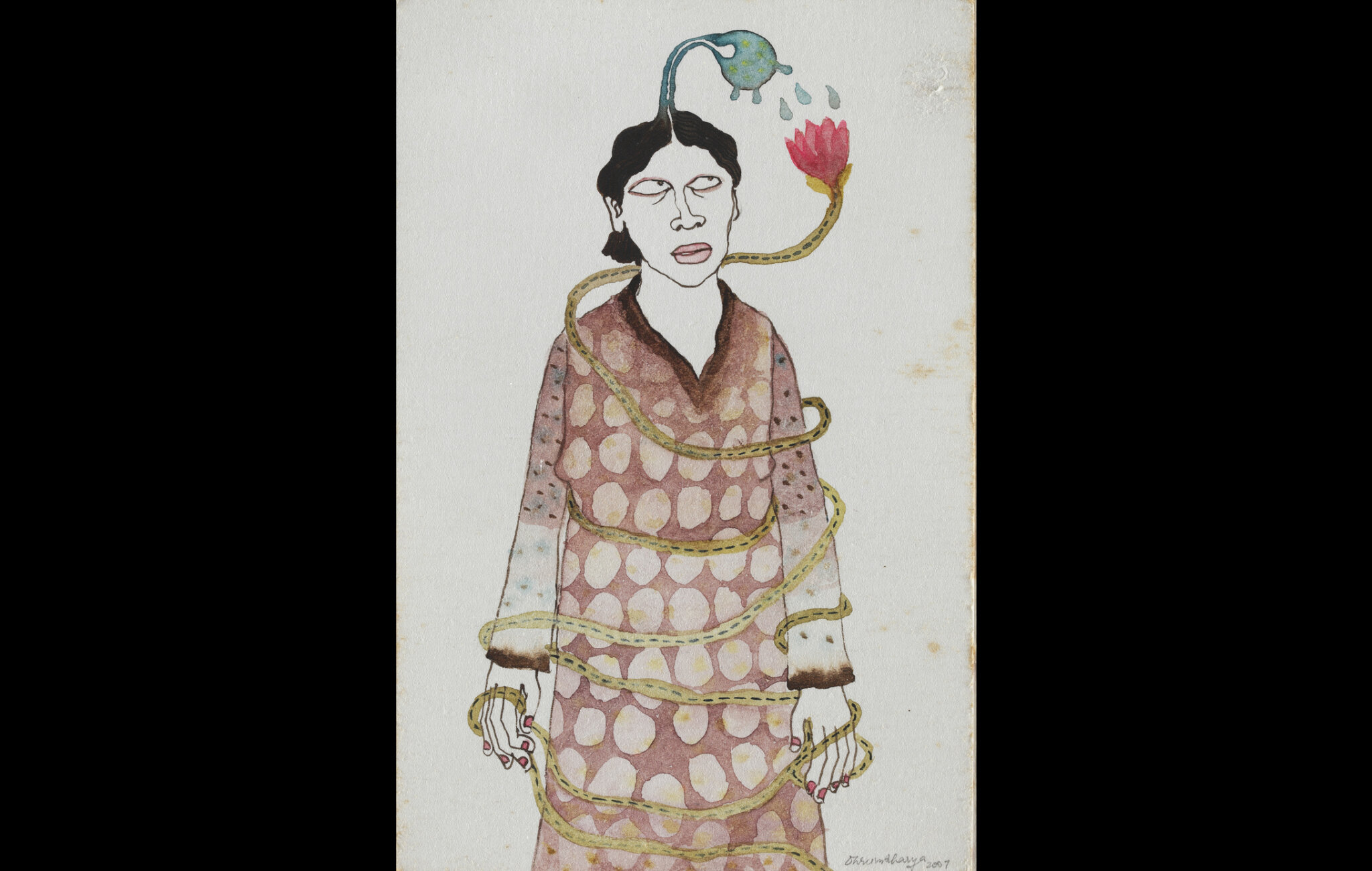 Dhruvi Acharya’s paintings portray the urban woman. She creates a canvas that most often depicts a comic-like female figure in a visual world unique to each painting. In this world thoughts exist as real entities and human forms take on aspects of their emotional personalities. Often these figures are represented with blank expressions and blank speech bubbles, in her later works the speech bubbles were replaced by chatter mouths. She adopts nuances like these to convey her dark humor and satire, in order to provoke the viewer towards thinking about the realities of her protagonist’s life.

This untitled work of a ‘flower stem wrapped around a woman’ features a woman dressed in a long shapeless dress. Her face remains white and expressionless, as is typical of Acharya’s style. The figure looks up at the protruding blue bump attached to her head, a contraption that is watering the flower wrapped around her body. This 2007 painting seems to be the predecessor of Acharya’s 2008 show based on environmental concerns. In the show, she imagines a world where there is no clean air to breathe, as a result of which human figures have mutated to be half-plant and half-human, thereby creating the air they breathe themselves. Yet not all humans have evolved and this inevitably leads to a battle between the haves and the have-nots. The lack of expressions on these figures leaves the viewer bewildered, particularly given the theme the portraits represent.

This is Acharya inciting humour in grave, serious issues. Her portraits have a refreshing new language that is unlike any other in the art world, with figures that are quirky and strange while at the same time dark and symbolic. Acharya was always interested in drawing and creating illustrations. She began working towards a career in art in 1998 at Maryland Institute College of Art, Baltimore USA. After returning to India, it took her three years to exhibit her work in Mumbai’s Jehangir Art Gallery. She derives her inspirations from Indian miniatures, comic books like Amar Chitra Katha and contemporary street art. Today, Dhruvi has a close relationship with Chemould Prescott Road, where she has participated in solo as well as group shows.