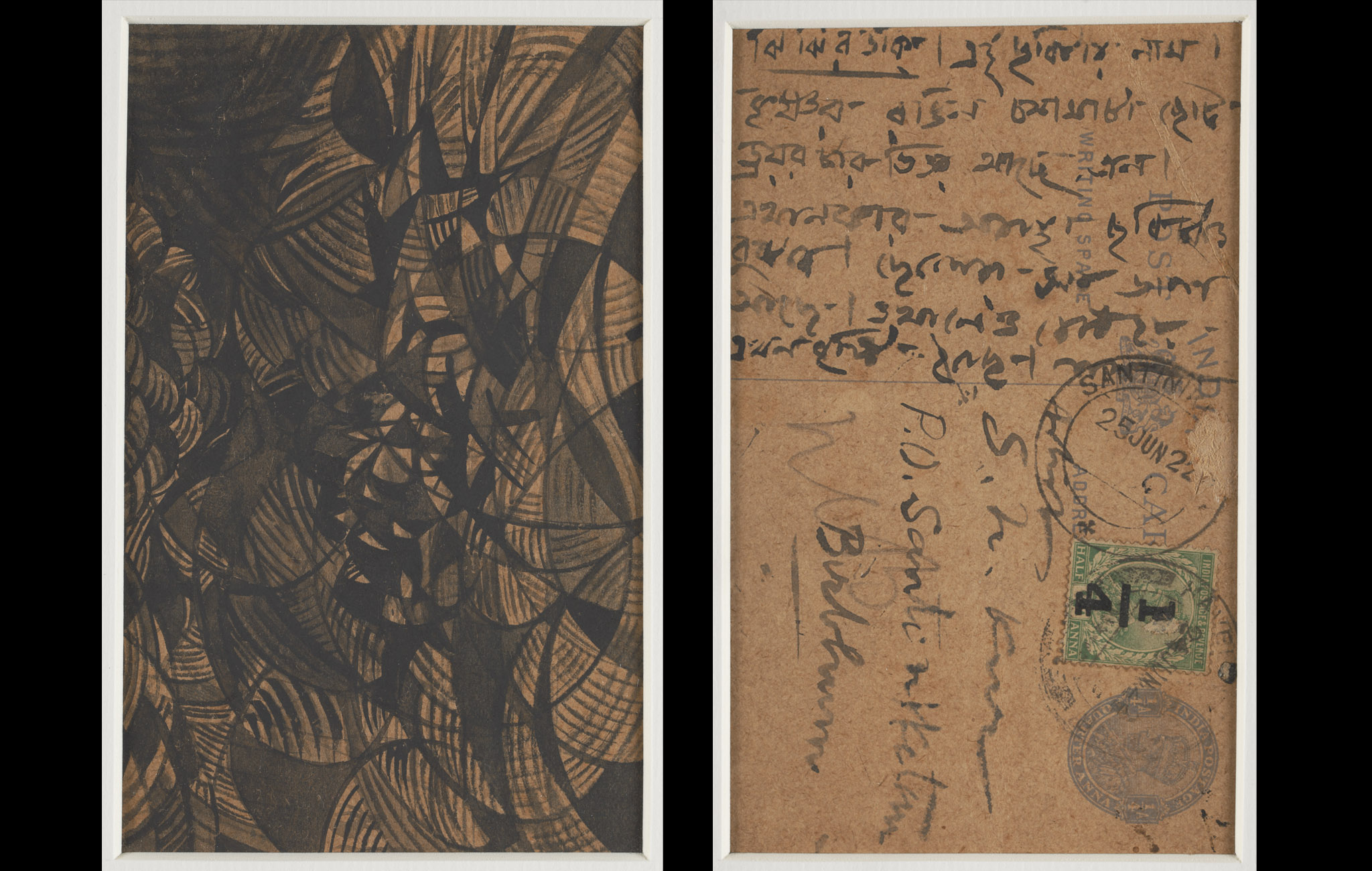 In the first of this series of ink on card work addressed to Nandalal Bose, Jadupati Basu has depicted a nighttime scene of crickets in a bush. He has titled this painting ‘jhijhirdak,’ which translates from Bengali to ‘the sound of the crickets.’

In this postcard artwork, Basu is conveying to the recipient, Bose, his fascination with the sound of crickets in a bush during his nighttime strolls. The painting appears to have an effect of several leaves overlapping with one another because of the intensity of the lines. Even though the composition is rather abstract in nature, the viewer is able to make sense of the lines and shapes represented because of the description.

Originating in Calcutta and Shantiniketan, the Bengal School of Art promoted a shift in ideologies and art representation, to a more modern and contemporary approach. This initially started throughout India during the British Raj in the early 20th century. Artists of the Bengal School combined art forms like folk art, traditional Indian painting traditions, Hindu religious imagery, and indigenous art forms with contemporary techniques of depiction.

The Bengal School aimed to counteract the tastes of British collectors, who were only interested in collecting Company Paintings (East India Company), by reinventing and bringing back traditional techniques of art making, like the Mughal folio style of painting and the Rajasthani Pahari paintings, which portrayed scenes of traditional Indian life. The founding artists of the Bengal School include: Abanindranath Tagore, his sister Sunayani Devi, Asit Kumar Haldar, Jadu Pal, Bakkeswar Pal, M.A.R Chughtai, and Kshitindranath Majumdar.

Nandalal Bose (1882-1966) a pupil of Abanindranth Tagore, became deeply interested in the wash techniques of Japan and China. During his visit to Japan, he began creating postcards based on landscapes and other visuals he witnessed during his travels. These were personal works which he would send to his friends and family as gifts. As he was the principal of Shantiniketan, this practice was taken up by his students. Personalised postcard art thus became a tradition in Shantiniketan.

Jhijhirdak (Sound of the Crickets)

Watercolour on card; ink and wash on card