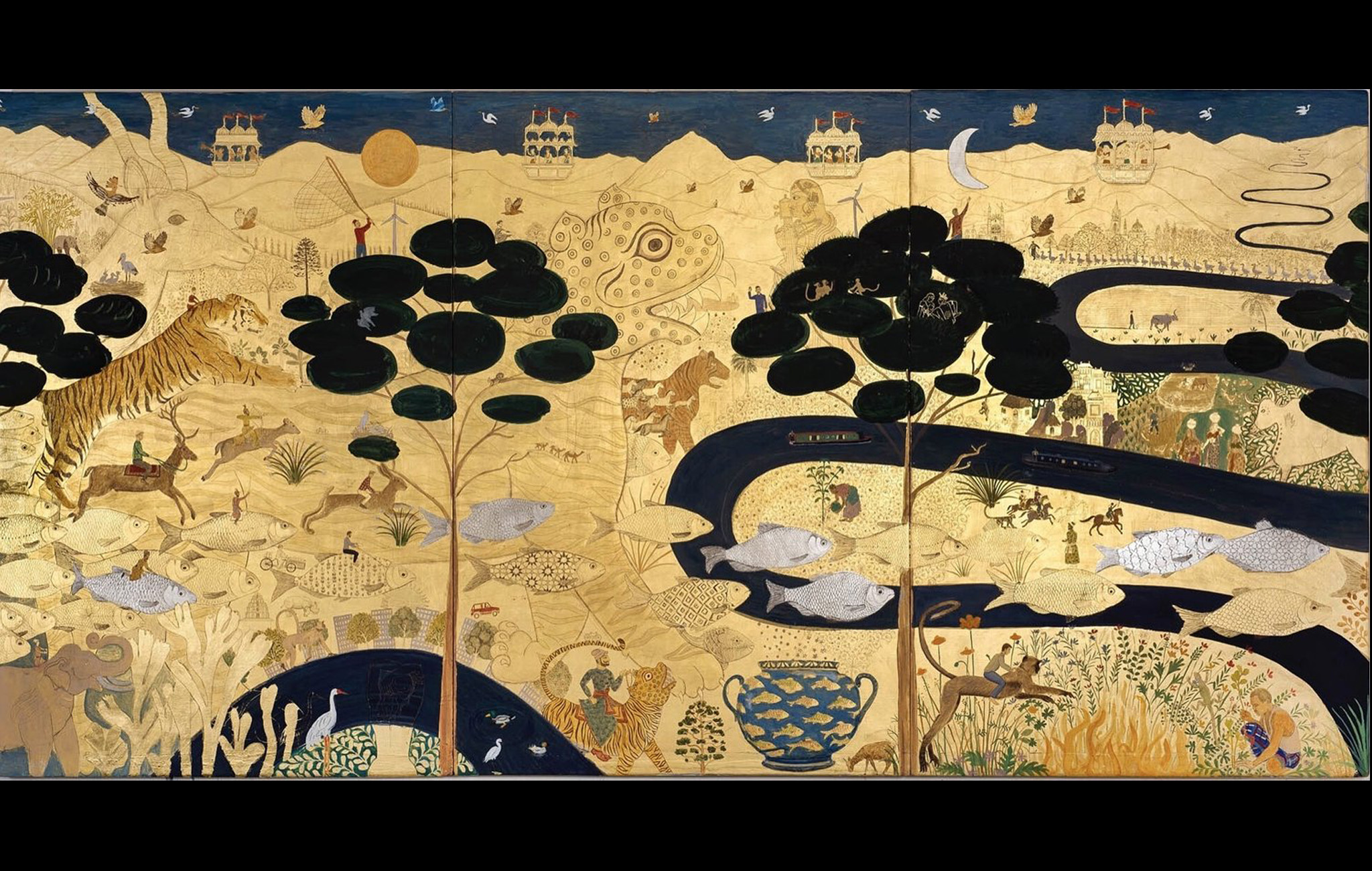 Created using oil paint and 22 ¾ gold leaf on Gesso panels, Jethro Buck’s painting ‘Wild Things’ borrows and meshes together a potpourri of images from across the global landscape – from pastoral England to Mughal India.

This miniature style painting teases a range of dynamic figures – animal and human – who go about hunting, tending to farms, or foraging amidst lush vegetation and arid desert lands. Various worlds – urban and rural, natural and built, traditional and built – flow into one another in perfect harmony. “It’s a call for reconnection, both literally, like we need to get back out there and back into the natural environment, but also symbolically and culturally,” says Buck, whose artistic practice, much like his work, stressed on the need to preserve the traditional.

However, the artist simultaneously introduces various elements of strangeness, imparting a dream-like quality to this painting which spans across six feet in width.

Entering the painting’s middle ground from one side is a group of men armed with hunting gear. A closer look reveals that they are riding the very deer they would be expected to hunt. Furthermore, all of these hunters are located within a larger figure of a tiger, the stripes on whose body also double as the texture of the hunting ground itself – taking the shape of sand, ground, and wind. On one side of the foreground, a man can be seen riding a leaping monkey while on the other a man can be seen riding a tiger – a figure originally seen by the artist in a Gazi scroll at the British Museum. Dubbed “a call to something wild” by the artist, the painting is rich with several other meticulously painted details.

A school of fish traverses the breadth of the painting’s lower half. Some of them are golden while the others are silver, but all are covered with highly decorative scales. A river zigzags its way across a section of the canvas. On it are two delicately painted barge boats, which the artist notes was inspired by his time in his Cambridge studio from where he could often see barge boats make their way across a canal. Flecks of civilization dot the banks of the river – a city with several identical high rises and tiny automobiles, a dense village surrounded by lush farmlands and women carrying pots of water.

Jethro Buck uses the technique and tradition of Indian miniature painting to celebrate and document the natural world. He often uses hand ground natural pigments in his paintings. Buck holds a Bachelors degree in Fine Art from Falmouth College of Arts, as well as a Masters degree in Traditional Arts from the Princes School of Traditional Arts. He is also the recipient of a grant from INTACH (Indian National Trust for Art and Cultural Heritage) which he used to study Indian miniature painting under the tutorage of Jaipur based master painter Ajay Sharma, and his wife, Vinita Sharma.