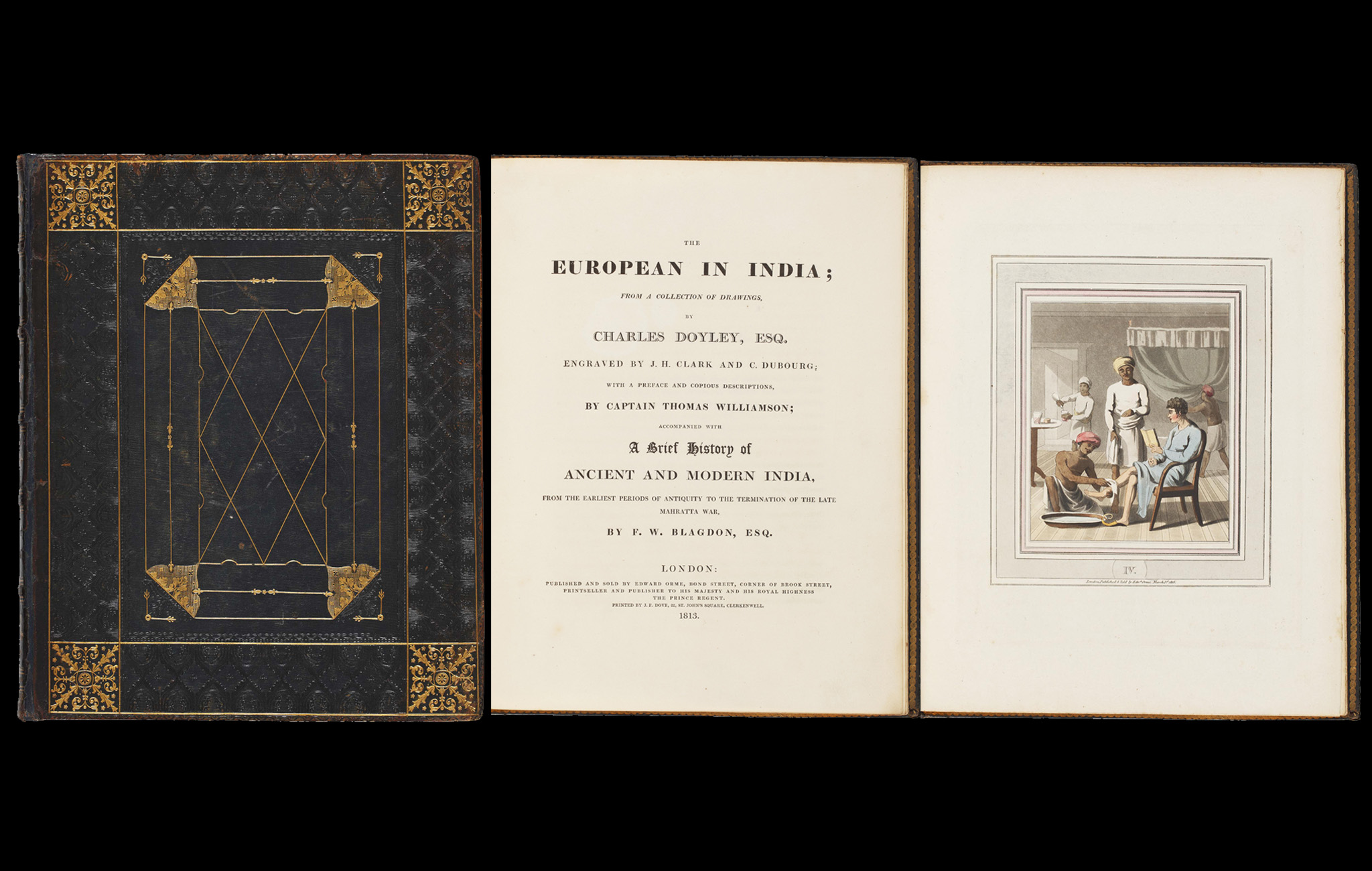 ‘The European in India; from a collection of drawings by Charles D’Oyly, Esq. engraved by J.H. Clark and C. Dubourg; with a description by Captain Thomas Williamson; accompanied with a brief history of ancient and modern India…by F.W. Blagdon Esq.’ is a collection of English colour plates about colonial life in India, with plates after drawings by Charles D’Oyly. D’Oyly, a noted student of artist George Chinnery, shares his love for drawing rural India, its people and animals.

Artists such as Thomas and William Daniell, Sir Charles D’Oyly, George Chinnery and William Hodges made paintings of India that focused largely on ancient monuments, ruins, and cities, which contributed to a larger valorization of the picturesque. The picturesque is an aesthetic category romanticizing the rough edges and bygone grandeur of overgrown ruins such as that used in the imagery of ancient Rome. This fashion for the ruin is seen in the imaging of cities such as Dhaka and Calcutta. The translation of the picturesque to India produced an image of a once-great subcontinent now fallen, leaving its monuments to be taken over by the jungle.

Sir Charles D’Oyly was the 7th Baronnette and an amateur artist and a part of the Bengal Civil Service from 1797 to 1839, based in Calcutta, Dhaka and Patna. He was greatly influenced by the artist George Chinnery, who was his close friend and stayed with D’Oyly during the initial stages of his career. Together, they would go on many painting expeditions. One of D’Oyly’s most productive periods was in Patna from 1821 to 1831, during which time he was appointed Opium Agent and Commercial Resident when he created many paintings. He published several books with engravings and lithographs from his drawings. In Patna, he established an Art Society, of which he was elected president.

At the time lithographs were being produced in Calcutta, and D’Oyly ordered a lithographic press for the Society from Edinburgh in 1823, but due to some accident, it drowned in the Ganges. But another purchase was made, and a machine arrived safely the next year. By 1828, the Behar Amateur Lithographic Press was producing hundreds of small prints from drawings of its members.

Click here to read more about colonial artists in Calcutta.

Europeans in India: From a Collection of Drawings by Charles D'Oyly