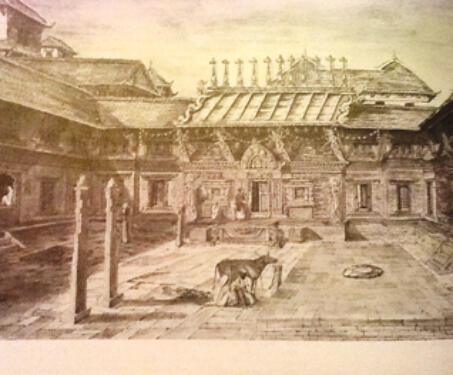 PAST TENSE: The Mulchok where King Harisingh Deva’s ‘yantra’ is now located in a 19th century water colour.

King Harisingh Deva of Simraongarh must have sat on his heavy-set chair while a pair of household staff was cross-legged on the black chlorite stone floor massaging sandalwood oil onto his feet. The masseuses must have been especially drowsy that day because of a combination of intolerable humidity, the postprandial partaking of raw beetle nut, and the soporific calls of cuckoos outside.

Despite the protestations of the chief of staff of the royal household, the servants didn’t seem to have their mind on the job at hand and the king didn’t look unduly concerned.

The year was 1352 and Simraongarh palace was located deep within the dense jungles along what is now the Indio-Nepal border in Bara and Parsa districts. Harisingh Deva was a philosopher king intrinsically disposed to self-reflection and spent a considerable amount of time pondering the question of existence and the meaning of life. He was always on a different wave-length than those around him.

Fully alert with his chin cupped in his right hand, he sat gazing around his large airy verandah that monsoon afternoon, occasionally glancing down at the sleepy servants. Destiny had placed him on the throne, but he struggled to understand why. The question continually vexed him. 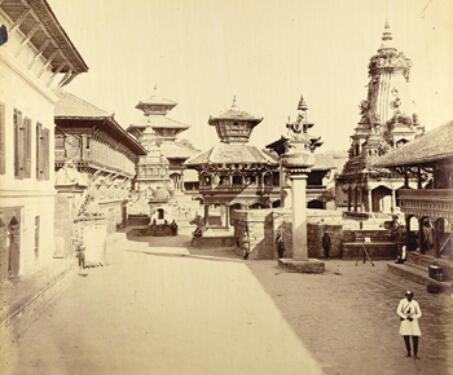 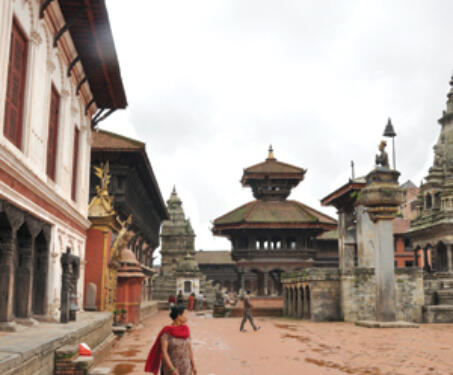 A grave expression suddenly took hold over the well-groomed face of King Harisingh—he turned to his left, then right, and then slowly towards the ceiling as he simultaneously placed his hands on the shoulders of either servant indicating to them to stop moving so he could listen to a distant rumble. “Go!” he thundered to the Chief of Staff. Destiny was playing itself out before his own very eyes. His kingdom was being invaded by the powerful and fierce Gheyas-ud-din Tughlaq of the Delhi Sultanate, who was of Turkish extraction.

Less than a decade earlier the Tughlaq ruler had successfully conquered Delhi and was turning his attention to subjugating Bengal, which he accomplished and was on his way back when he decided on a whim to attack this rather small, but culturally important outpost of the Mithila kingdom.

The Indian art historian Heinrich Zimmer, alluding to the general geography of Simraongarh and the stone sculptures and artifacts discovered there, asserted that these ‘works were important historically because of the region’s geographical position between Nepal and Tibet in the north and Java, with its famous centres of Buddhist learning, in the southeast’. Zimmer was of the opinion that the region ‘inspired to a remarkable degree both the arts and the philosophies of these two realms’, inflections as he called them of the glorious Gupta period under the Pala and Sena dynasties (c 730—1250AD).

The events surrounding the invasion of Simraongarh were going to have a far-reaching impact not just on King Harisingh’s kingdom, but also on Bhaktapur in Kathmandu Valley to the north-west. The King’s fallback option in case of an attack was to retreat to Bhaktapur, which is indeed what he did.

He was prepared for this attack and had made particularly special arrangements to safeguard a powerful tile-shaped mystical diagram (yantra) that was the family’s tutelary deity and which he had resolved to protect at all costs.

It is this yantra that is now the centrepiece of Bhaktapur’s Darbar Square and which is discretely housed within the exquisite Mul Chok or Taleju temples, accessible only via the famous golden gate of the Sun Dhoka. The gate itself is crowned by a beautiful bronze sculpture of a four-headed, ten-armed Durga which is an anthropomorphic representation of Taleju, or the human depiction of the yantra carried to Bhaktapur during the flight from Simraongarh by King Harisingh Deva and his entourage and which subsequently served as the basis for establishment of a cult of the goddess called Taleju by subsequent Malla kings of Bhaktapur.

According to historian Niels Gutschow, the Mul Chok mentioned above must have been first constructed in the course of the 14th century to house the new tutelary deity of the Malla dynasty in her iconic representation as Taleju. However, what is not so clear is an explanation as to why or in what respect this yantra or iconic representation of Taleju is significant or embodied power captivating enough that it would serve as the family god to successive Malla kings of Bhaktapur.

Even more challenging is to attempt to unravel an extremely tricky yet critical question, namely whether the origins of the aforementioned yantra can be traced back even further back than Simraongarh. The forefathers of Harisingh Deva, the immediate ascendants of Nayadeva of Mithila, were earlier ensconced in Karnataka in South India under the over-lordship of Chalukya Emperors such as Vikramaditya VI and Somesvara III. They had regularly conducted military campaigns as far north as Mithila which they managed to subdue.

Simraongarh had been a seat of power for these Karnataka commanders since around the late 11th century from which time until the first quarter of the 14th century and King Harisingh Deva’s flight to Bhaktapur, a mere 250 years intervened.

The question therefore remains: is there a credible historical connection between Bhaktapur and Karnataka?

The stuff of Mithila

The Mithila Kingdom held sway over Kathmandu Valley twice in the past 1,000 years, its influence on the evolution of Newari culture and language has been well documented. The first period of Maithil influence was in the 11th century during the reign of Nayna Deva of Simraongarh, located in what is now Bara district, which lead very likely to the dethronement of the princes who ruled Kathmandu Valley. The second time it was the last king in Nayna Deva’s dynasty, Harisingh Deva, who had to flee Muslim invaders to Kathmandu Valley. Later, the Malla king of Kathmandu married Harinsingh Deva’s grand-daughter.

Thus, the Malla reign of Kathmandu Valley was heavily influenced by Maithil culture. Maithili was the official language of the court, and Newari music, art and language derived a lot from Mithila. The Shikhara architecture of the Mahaboudha (this stupa as I understand is a facsimile of the temple at Bodhagaya) and Krishna temples of Lalitpur were brought in during this period, indicating an influence not just of Mithila, but of south India on Kathmandu Valley. Indeed, there appear to be historical records pointing to a connection between the Valley and Mithila, and more specifically between Bhaktapur and Simraongarh, even beyond to Karnataka in South India.

Given this historical perspective, the current tussle between the plains and the hills in Nepal seems petty and banal, based on an inaccurate understanding of history. And a time when relations between Nepal and India are limited to mundane politics and petty point-making, it may do well for us to remember how closely our cultures are intertwined. Instead, the lack of a dignified position by Nepal and India’s micro-managing have taken away from the glory of the past.

More research is required to dig out the details of these connections, and a joint Indo-Nepal archaeological project is needed of the ancient kingdoms along the plains. One could start with Simraongarh, which is a testament to the bonds between India and Nepal that pre-date both nation states. 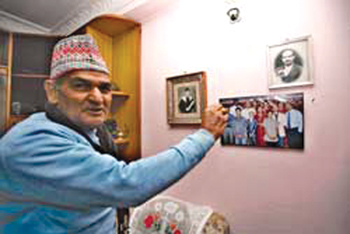 Gurudutt Mishra (pic, above) lives in Mahapal of Lalitpur and his ancestors came to Kathmandu Valley with King Harisingh Deva’s entourage more than 700 years ago. Maithil Brahmin families like the Mishra and Jhas still live in the midst of Newari families like Shresthas, Pradhans, Bajracharyas, Shakyas, Tamrakars in inner city Patan and Bhaktapur. They speak Nepali with strong Newari accents, observe all the local festivals and are indistinguishable. Bhaskar Bodh Mishra is now 93 and lives in Bhaktapur and also traces his ancestors back to the first Maithil arrivals from Simraongarh in Bhaktapur in the 14th century.