The festival of light fast approaches, which of course reminds us of the legend behind the pomp and its heroine, Sita. Queen, Goddess, icon, Sita is a woman exemplar, revered for her beauty, grace and loyalty. But in modern times, Sita has had to pass frequent tests of feminist fire. If she is denigrated, it’s the fault of several popular depictions that cast her into female subservience and self-sacrifice. And to accept this banal version is to deny the true values she espouses of pacifism, pluralism and even individualism. She is insolent when her husband tells her she cannot accompany him in exile. She is not a delicate lady who cannot rough it out in the forest. She is not meek, she is constantly challenging her usurper.

As we, at Sarmaya, go deeper into the art that originates from what’s believed to be Sita’s birthplace, Mithila, we’re drawn in by reiterations that give us her mind. It’s her perspective, when carefully told that provides us a lesson in resilience, courage and even defiance. It’s her side that ultimately elevates this 3,000-year-old story to an epic. 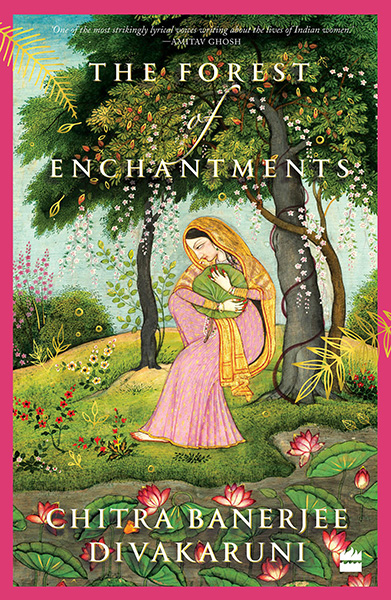 After The Palace of Illusions, Chitra Banerjee Divakaruni proves again that mythical women were real people. Her Sitayana is a love story, where Sita and Rama are equals. The reader is privy to her thoughts and feelings, and so we’re given a private tour of the lives of Srimati and Sri Ramchandra Raghuvansi. This Sita is completely rational and maternal. As the daughter of the Earth, she is excited to go to the forest, which is full of intrigue and freedom and when their exile is over, she brings back the forest’s wisdom to her people. It’s her idea to bring the vanars and the rakshasas back to the Ram rajya for peaceful coexistence. Her slip up in wanting the golden deer is thoroughly justified. The golden deer comes to represent the infant she longs for but cannot have as it is decided that the forest is too harsh a place for a child. Ultimately, it’s in Valmiki’s ashram in the forest that she gives birth after she is banished from the kingdom. In this ending, Sita refuses to undergo a second agni pariksha to prove her innocence, choosing to abandon her dear sons rather than disappointing the generations of girls who would have to follow her example.

In this animated musical rom-com, Sita bursts into Annette Hanshaw’s woeful songs and looks an awful lot like a sexy Betty Boop. When she dances, her curvaceous hips sway like a pendulum, one hand rests dramatically on her geometric head. The moon tap dances, the trees and buildings in the background shrink and distort or stretch out fantastically, the rakshasas fall apart like skittles when shot by Rama’s sure arrows. These scenes cut to transitions showing scenes from a Mughal miniature or Indonesian shadow puppet narrators trying to get the story straight, giving us a flash of the wealth of visual traditions that are linked to the epic.

Seemingly, this is a fun take but it also serves as a parable reifying rejection, and examining heartbreak. This Sitayana rests comfortably in the ambiguity of people’s choices. Why do people mistreat their partners, and why do their partners go back to them? There is no right answer, only human suffering. 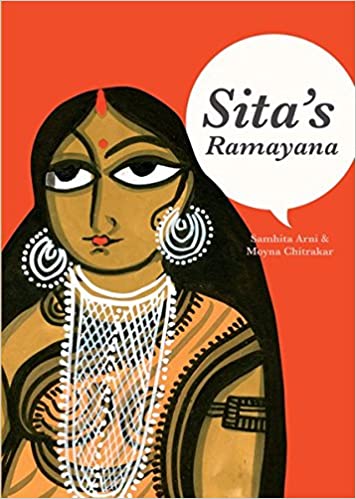 Sieved from the hundreds of retellings, while still being representative of those many, is the graphic novel, Sita’s Ramayana written by Samhita Arni and illustrated in the patua style by Moyna Chitrakar. The story begins with Sita banished from the world of men, wandering the forest of Dandaka, which hitherto had been asleep for a thousand years and awakened to listen to Sita’s tale. Nature has such a big part to play in the epic, as highlighted by Moyna Chitrakar’s curves and stripes. The archetype of the forest distills it into a realm that is conscious and alive. The scenes of the Ramayana are supposed to be watched in between leaves, from the bushes. It’s the Ashok Vana, where Sita is imprisoned – from where she cannot see the war, which the novel says is more merciful to men than women. War makes victors and heroes out of men, or if they are vanquished they don’t see their homes taken and their women widowed. “But if you are a woman – you must live through defeat…”

In the difficult wait through the war, Sita is supported by Trijatha, Vibhishana’s daughter, who fills her in with the details. This book gives you a slice of female relationships through Sita’s equation with other women like Trijatha, Kaikeyi and Surpanaka, and in that sense feels like a complete reorientation. 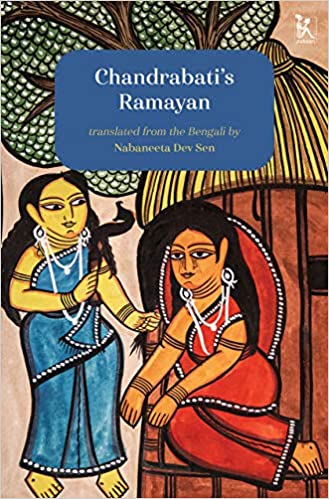 Chandrabati was one of the first women to retell the Ramayana in the regional tongue. In the 16th century, Chandrabati composed a Bengali version solely focused on Sita’s story, herself choosing to stay unmarried to become a professional poet. Chandrabati’s poem was ripped apart as weak and incomplete but she didn’t care!

Indian women have held their own separate view of Indian civilization. They have not looked up to Sita because she saved her husband from disgrace but because she braved injustice. They have always sung for themselves. In folk traditions, women don’t mind calling Rama names and telling him “Ram, tomar buddhi hoilo nash!” (Rama, you’ve lost your mind). And Chandrabati Ramayana speaks from the Indian village woman’s heart. It ignores the war, instead we have it described through a Baromaasi, a woman’s song about everyday sorrows which is narrated by Sita. The war is over in two couplets since Sita only saw it in a dream. There’s no customary dedication to Rama in the beginning or the end. The poem evades the spiritual benefits of listening to the Ramayana and it’s never silent about the tragedy and sorrow of Sita. 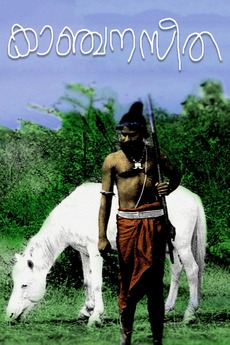 What are the consequences of sticking to a code of honour and sacrificing love? This 1977 minimalistic Malayalam movie celebrates Sita as prakriti (nature). Not once is she shown in human form, but her thoughts and feelings are communicated to us through nature and the changing forest.  The title is a reference to the stand-in golden statue of Sita that is necessary to complete the yagna as Rama refuses to take another wife. All this serves to enhance her tragedy, for how can an actual person be treated so harshly?

And while Sita is personified, Rama has a potbelly, Lakshmana’s got acne scars. This Ramayana narrated is a comment on the mercilessness of sovereign power and cruelty of patriarchal duty, where men too are victims of masculinity. Rama is a sad figure, who dies by suicide. This is his true salvation.