Calcutta. A capital of artistic and political imagination. A land of memory and vision. A city of joy and heartbreak. A capsule of what was and what could have been. The cinemascape of Calcutta shows us all this and more, with the kind of love and loathing that only great cities can conjure. Here are what we believe to be 9 of its most compelling avatars in Indian cinema. 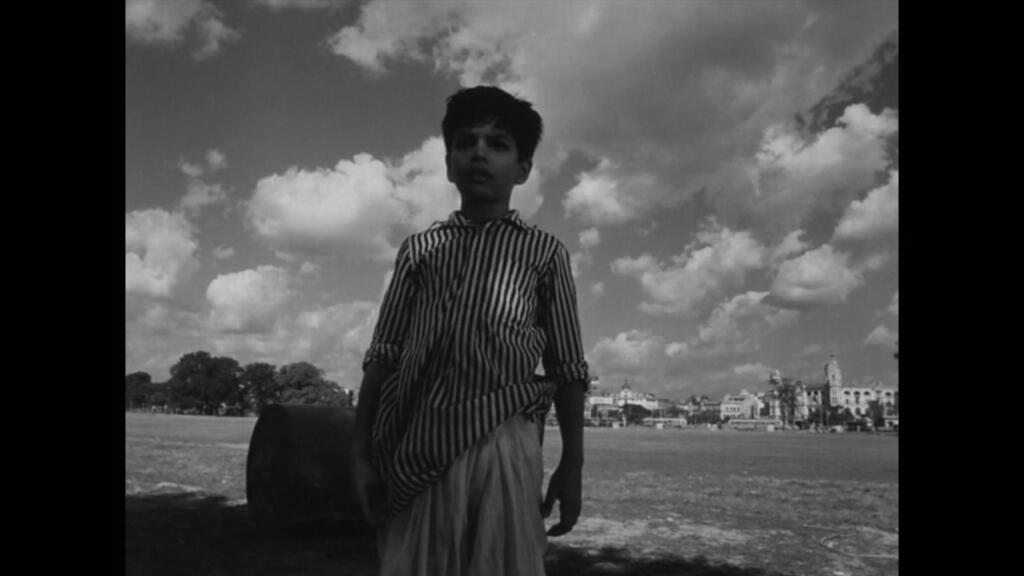 A pioneer of parallel cinema in India, Ritwik Ghatak was a true original — an oft-overlooked auteur, an artist who believed in the social responsibility of cinema, a filmmaker who used the medium as a form of protest and a vehicle to express his anger at injustice and suffering. While his primary focus was the Partition and its devastating aftermath, Calcutta, with its squalor, slums and burgeoning refugee colonies, became an integral part of his storytelling. Based on Shibram Chakraborty’s classic novel, Bari Theke Paliye (The Runaway) best communicates his socialist leanings on the glittering promise of urbanity and the disillusionment that inevitably follows.

We see the city through the eyes of Kanchan (sometimes quite literally from his vantage point a couple feet from the ground), a bright 8-year-old boy who runs away from his village and his authoritarian father with nothing but the dream of Calcutta and its riches on his back. He is fascinated with the metropolis, its tall buildings and teeming crowds, its abundance and luxuries on offer, until one by one, each of his fantasies is punctured by the brute force of reality. He sees and experiences the starvation and glaring disparities, the loneliness and alienation, the misery and pain. One by one, the stars go out in his eyes.

Watch a song from the film here: 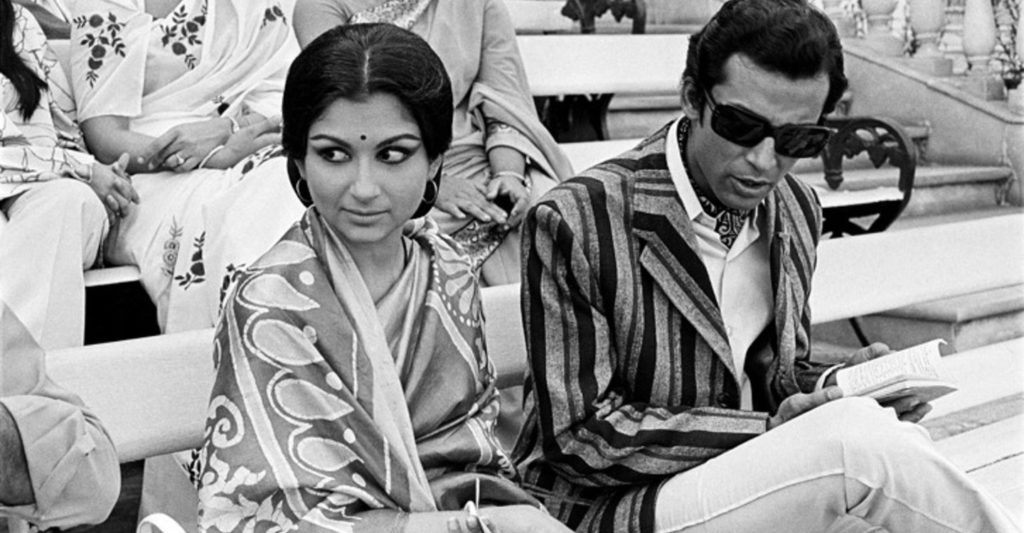 A decade after his internationally acclaimed Apu Trilogy, still the oeuvre by which he is known and celebrated, legendary filmmaker Satyajit Ray made another trio of films — Pratidwandi (The Adversary, 1970), Seemabaddha (Company Limited, 1971) and Jana Aranya (The Middleman, 1976). Together, these showcase life in Calcutta at a time of great turmoil, when social inequalities were at their most harsh, and the city was a nucleus of discontent and revolutionary thought.

In the first film we watch the protagonist battle with a Calcutta that is ruthless in beating him down as he searches desperately for a job and a way out of his social condition, while his brother embraces the radicalism of the Naxalite movement. In the second, we see the corrupting nature of corporate success in the city and the eternal greed for wealth that comes with living the good life, the blindness to damning social realities that lives alongside days at the races and nights at the club. And in the third, we experience Ray at his most merciless, as he paints a picture of frustration, cynicism and hopelessness, introducing us to the flexible, sometimes non-existent, moralities in a Calcutta where honesty has no place. 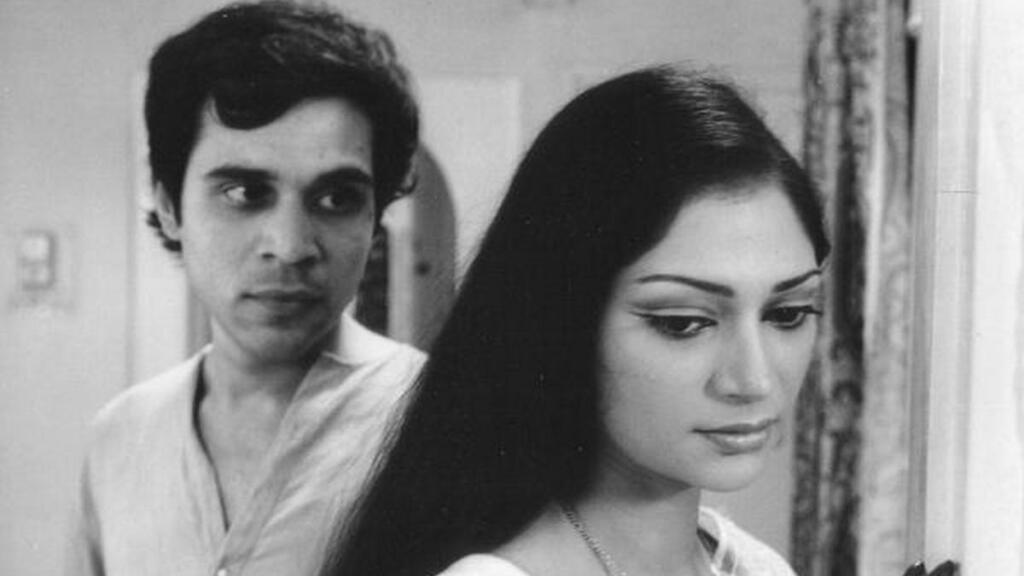 In master storyteller Mrinal Sen’s own words, “Calcutta instigates me, Calcutta settles me, Calcutta makes me cry, Calcutta inspires me.” Widely considered to be his most defining work, The Calcutta Trilogy is made up of three films: Interview (1970), Calcutta 71 (1972), and Padatik (The Guerilla Fighter, 1973). The debate on which trio of tributes to the city is better — Ray’s or Sen’s — is an ongoing one and unlikely to ever find resolution, but it’s safe to say that both are unmissable.

In the first film, we are presented with Calcutta’s obsession with carrying on its colonial legacy long after the British have left, and the unique predicament of a man who can’t find a job because he doesn’t have a suit. The second film is an angry indictment of poverty, corruption and the class system through four separate stories of the steady erosion of values that comes with both a lack and an abundance of money. Finally, the third film shows us a political activist and fugitive from the police having a severe existential crisis and finding himself questioning his life’s work and whether he and the Left have done nearly enough for a barely surviving Calcutta and its people.

Watch a clip from Interview here:

Remembering Filmmaker extraordinaire, #MrinalSen on his 96th birth anniversary. (14/05) Here is a clip from his film Interview (1971).

Posted by Bollywoodirect on Monday, 13 May 2019 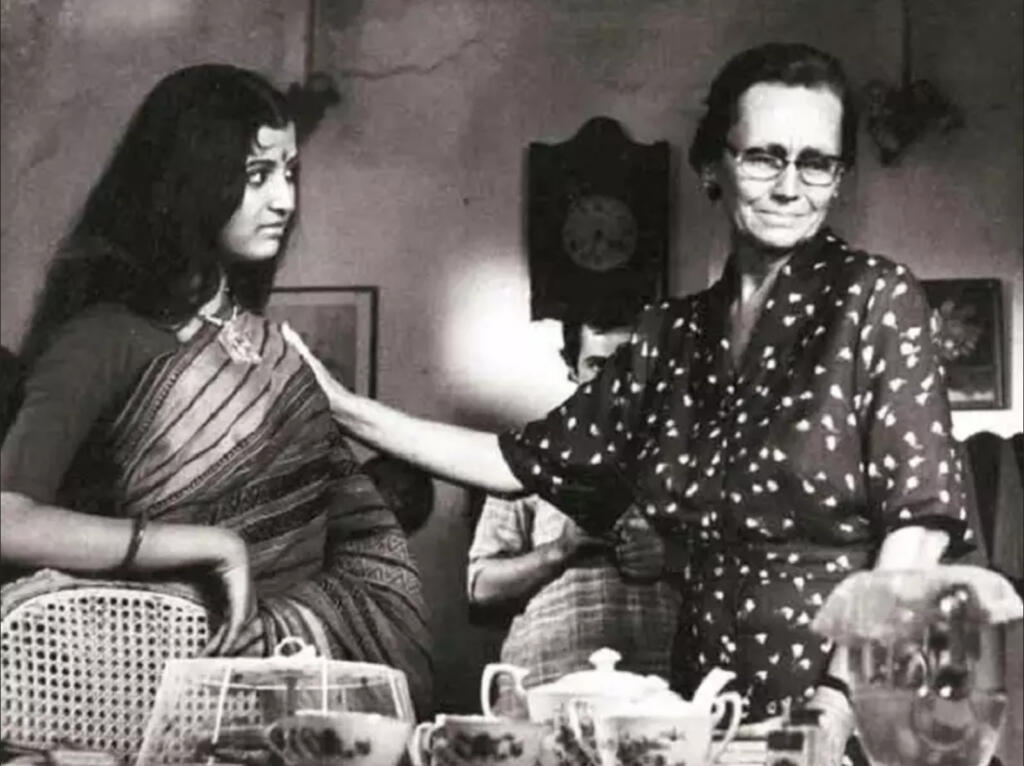 The lift in her shabby Calcutta building (at the titular address) is out of order yet again, and Violet Stoneham trudges up the creaking stairs with a resigned acceptance of the lemons that life has dealt her. Her face wears a steady expression of disappointment, sadness and unnamed regret, and her body stoops under the crippling weight of loneliness. Aparna Sen’s directorial debut is unflinching in its depiction of the world of this Anglo-Indian schoolteacher in a city that has fast left her (and the British empire) behind as it soars into the heady glamour of youth, money and a new kind of Indianness.

When a pair of young lovers come into her life, she starts to smile and giggle like she perhaps once did, choosing to ignore their betrayals for the relief and succour of company, to feel wanted and valuable again. But these small moments of happiness only highlight the bookended emptiness in which she passes her days. Until the final scenes of the film, when Violet wanders the empty streets of Calcutta, reciting lines from King Lear with only a stray dog for company, and contemplates leaving this country of her birth for good, the city and life we see is sharply divided into the warm, romantic light of its youth and the cold, isolated darkness of age. 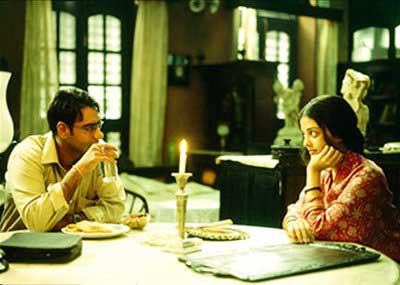 Unrelenting, all-embracing rain seeps through the walls, soaks the dreams and wets the eyes of the ‘players’ in Rituparno Ghosh’s first (and arguably finest) Hindi film, a paean to love, loss and O’Henry-inspired irony. But perhaps nowhere is the sadness of Raincoat more searing than in its unforgettable music, dominated by the deep, powerful voice of Shubha Mudgal, the profoundly moving flavour of folk and lyrics that almost tell the story better than the film itself.

Calcutta is as much a character here as any other, equal parts modernity and decay, microwave-ready flats and antique-filled mansions, showing us its blossoming industry and new money alongside its dilapidation and desperate memories of grandeur. A big city of shiny promises and possibilities where poverty is around every corner, where poor rickshaw-pullers still ply their trade, drenched to the bone. Where old lovers exchange lies upon lies and tell tall tales of unrealised happiness, but then give up everything they have for each other. A head of stubborn pride with a heart of gold, much like the city itself.

Watch a song from Raincoat here: 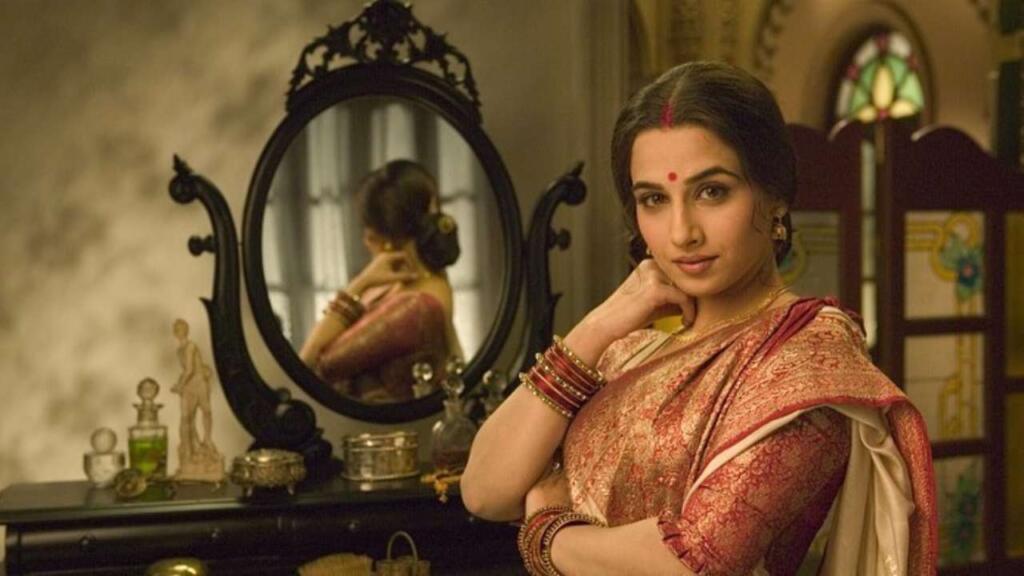 An adaptation of a 1914 Bengali novella by Sarat Chandra Chattopadhyay, Parineeta is a love story filled with innocence, born in a childhood spent together and turning into a coming-of-age tale about hard truths and standing up to family. Vidya Balan is luminous in her debut film, which paints her with Devdas-esque strokes in luscious colour and brings home the ‘Calcutta aesthetic’ of fashion.

Set in the ’60s and directed by ad film-maker and music-video creator Pradeep Sarkar, Parineeta features a fully Bollywoodised Calcutta, which is nonetheless irresistible. Think sunset boat rides by the Howrah Bridge, sprawling havelis with pristine stained-glass windows, gleaming teak balustrades and baby grand pianos, afternoon card games on lace-canopied beds, convertible rides and puchkas on spotless streets by the Victoria Memorial, even a burlesque sequence at a fine establishment called Moulin Rouge. The film is bathed in a golden light throughout and takes a rose-tinted view of both the city and the time, with a beguiling and hopelessly romantic soundtrack to match.

Watch a song from Parineeti here: 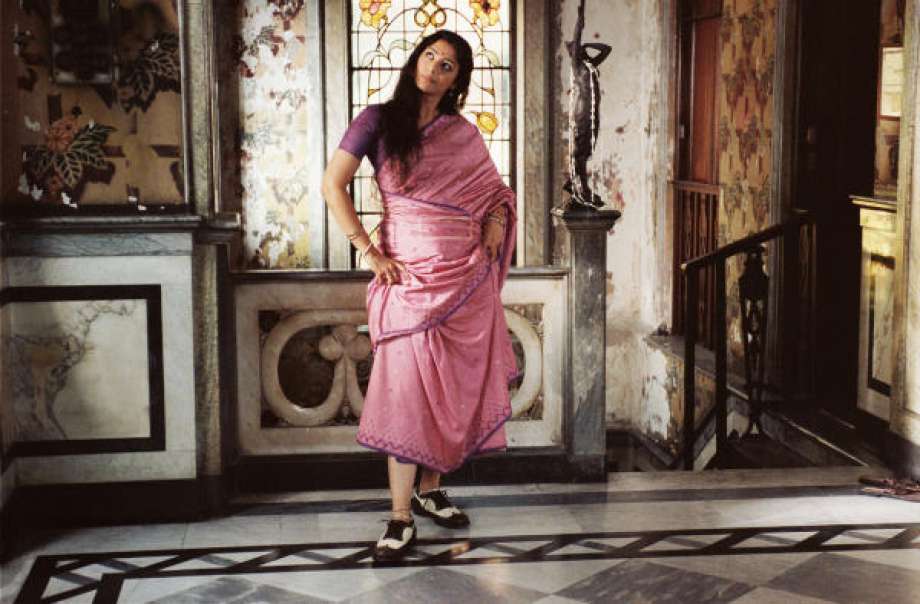 Could there possibly be a more nostalgic idea of India than the one that lives in the memory of those who have left the country? Jhumpa Lahiri’s gorgeous novel is just as deeply moving on film as it is on paper — in the capable hands of Mira Nair, who has made it entirely impossible to think of Ashoke and Ashima Ganguli as anyone but the late Irrfan Khan and Tabu.

Calcutta is and always will be home for the Gangulis, who emigrate to America as a young, newly married couple and grow their family there, bringing up two children who are far more American than they are Indian and who share with us the quintessential immigrant experience and quest for identity. Ashima especially yearns for home with a fierce longing, and we are shown the city both through her eyes, whether it’s walking in its gardens and singing on the banks of the Hooghly, and the eyes of her children — complete with oppressive heat, hungry mosquitoes and sardine-packed streets. Most of all, it reminds us that we carry our home in our hearts.

Watch the most memorable scene from The Namesake here: 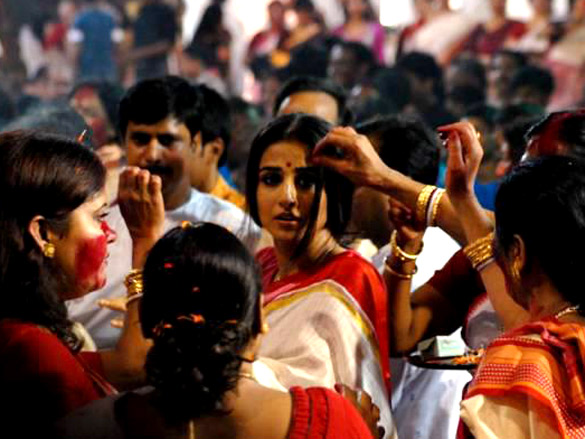 Vidya Balan returns to Calcutta (now Kolkata) for a very different cinematic experience, this time a dramatic thriller directed by Sujoy Ghosh and bursting with intrigue, which culminates in the colourful frenzy of Durga Puja and revels in the power of the feminine. She plays Vidya Venkatesan Bagchi, a heavily pregnant South Indian woman who comes to the city in search of her missing husband, and shows us the place through the eyes of the outsider: inexorably filthy, beaten down and falling apart at the seams, well-meaning and friendly if bumbling and malfunctioning.

With quiet rage and endless determination, Vidya navigates the decrepitude and secrets that surround her while escaping the clutches of a mild-mannered, unremarkable and terrifying assassin who screams at her that Kolkata is a dangerous place where anything can happen. As the city erupts with the clanging bells, beating drums, smoke and song, white and red of Pujo, we come to see that he was absolutely right.

The Intrigue of Detective Byomkesh Bakshy! (2015) 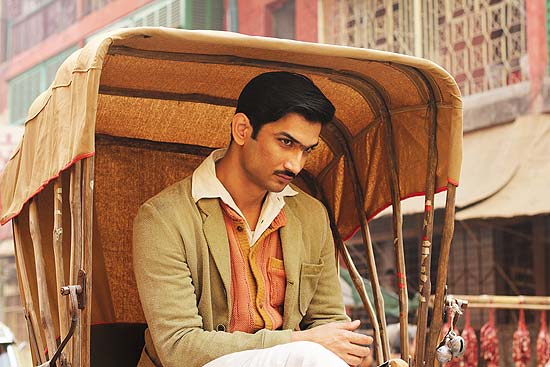 Byomkesh Bakshi, spelling debatable, has cemented himself in our collective imagination as the Indian Sherlock Holmes, with a similar genius for observation, logic and forensics. Though the character written by Saradindu Bandyopadhyay has been essayed by many actors, the one we are most likely to remember is Rajit Kapur, who played the detective on the massively popular Doordarshan series in the ‘90s. But director Dibakar Banerjee decided that Byomkesh needed to be reinvented for a new generation, and made a forgettable but richly detailed film with a regrettably unibrowed detective.

Banerjee recreated the Calcutta of the ‘40s, where the film is set, by listening to oral accounts from people who lived through it, to understand what the city looked, sounded and smelled like. Dimly lit carroms halls, smoky coffee houses, boys bathing in water from fire hydrants on the streets, the bustling markets of Chinatown and Chinese clubs, trams with Gold Flake ads on them, vintage cars and horse-drawn carriages, men wearing blazers over dhotis in Dalhousie Square. And at the heart of it all, a political plot. After all, what is Calcutta without its politics?