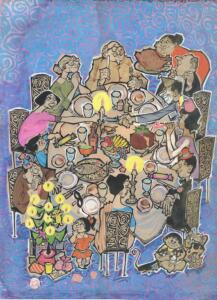 With his sharp wit and satirical yet sympathetic portrayals of daily life, Indian artist and cartoonist Mario de Miranda is the perfect companion during a lockdown. These illustrations  in our  StoryLTD auction, The World of Mario, would be sure to add some humour to your walls, and are as relevant as ever to the strange times we’re living in.

Mário João Carlos do Rosário de Brito a Miranda, more often known simply as the “Mario” of his signature, was born in 1926 in the Portuguese enclave of Daman. Four years later, his family moved to Goa, which inspired much of his work throughout his career.

Miranda described himself as a “social cartoonist” and someone who “loves to draw,” but had no formal training in art – he received a BA (Hons) degree in the History of English Literature from St. Xavier’s College, Bombay. Prior to that, he studied at St. Joseph’s High School in Bangalore, where he became famous for his caricatures among the students, getting into the occasional spot of trouble. A fellow student recounted one such incident:

“Our Science teacher Alec Alvares once demonstrated how invisible ink was made. He gave the class an assignment to make some invisible ink, write a few words with it, and to bring the papers to class. He would hold them near a glow-lamp and read them out. When he was reading these messages, he held up one paper and demanded: ‘Who did this?’ It was a caricature of Alvares himself. Mario stood up and admitted that he was the culprit. The Science Master stared at him for a long time. Then he said, ‘You seem to have a gift for this sort of thing. Keep it up and good luck to you.’”

Miranda kept “diaries” filled with his drawings and caricatures from an early age, documenting the people and world around him. These diaries were his constant companions, whether in Goa, during his school and college years, or on his travels across Europe, and many were later published. 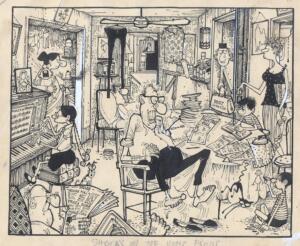 The artist moved to Bombay in 1951 in search of a job, and began his artistic career freelancing, drawing postcards and illustrations. He soon got a break doing a weekly cartoon for The Current, and was later invited by Walter Langhammer, the Art Director of the Times Group, to join them. This association led to Miranda’s work appearing in national publications such as the Illustrated Weekly of India. In 1959, while travelling in Lisbon, Portugal, he was offered a one-year scholarship by the Fundação Calouste Gulbenkian based on the sketches in his diaries. He worked in London in 1960-61 before returning to India and rejoining the Times Group.

His style was unique. According to Ranjit Hoskote, in an essay titled “The Art of Mario Miranda” (included in Bevinda Collaco and Gerard da Cunha eds., Mario de Miranda, Porvorim: Architecture Autonomous, 2008, pp. 79-80):

“Mario has a fine eye for the intersections between the individual’s private predicament and his or her place in a lifeworld at large. His antennae are tuned to the quixotic and the oddball; and he shows us how these seeming aberrations or departures weave in and out of the established structures of normality… Mario’s is an absurdist vision, but it is a humanly absurdist one; he is inclined to look indulgently upon human folly and foible… At the heart of his vision stands the crucial and mutually formative relationship between people and their environments.”

After a successful career in Bombay – during which Miranda illustrated significant books such as The Open Eyes: A Journey Through Karnataka by Dom Moraes (1976) and R M Lala’s The Creation of Wealth: A Tata Story (1981); published several books of his own including A Little World of Humor (1968), Goa with Love (1974) and Germany in Wintertime (1980); travelled to the US, the Baltics and Singapore; and won an award from the government of Goa, Daman and Diu (1986) – the artist retired and moved back to his ancestral home in Loutolim, Goa in 1996.

In an essay, author Manohar Malgonkar described this house thus:

This three hundred and thirty year-old house built in the late 17th century by a Miranda ancestor, has been occupied through the centuries by his descendants. A beautiful mansion elegantly appointed with handcrafted furniture and a banquet hall that once sparkled with fine food, fine music and fine wine, when the Mirandas entertained the most powerful in the land… A couple of steps through the portico lead to a solid wooden door of extravagant dimensions. As you are trying to locate the doorbell you become aware of a tremendous clamour within the house: of several dogs barking furiously and human voices, both male and female, shouting orders.

Over the next 15 years, Miranda continued to draw, travelled occasionally, and won awards including both the Padma Shri and Padma Bhushan. He passed away in his sleep on 12 December 2011 at his home, and was posthumously awarded the Padma Vibhushan the following year.

In the words of journalist Vinod Mehta, “Mario celebrates human frailty. None of us, he says, are perfect. Some of us have long ears, others have nagging wives; buses never arrive on time, our bosses are foolish and our politicians are corrupt, but life must go on. Mario asks us not to succumb to despair or cynicism. Tomorrow is another day… In short, he makes a plea for tolerance and understanding – and optimism.”