All images below © Sarmaya Arts Foundation 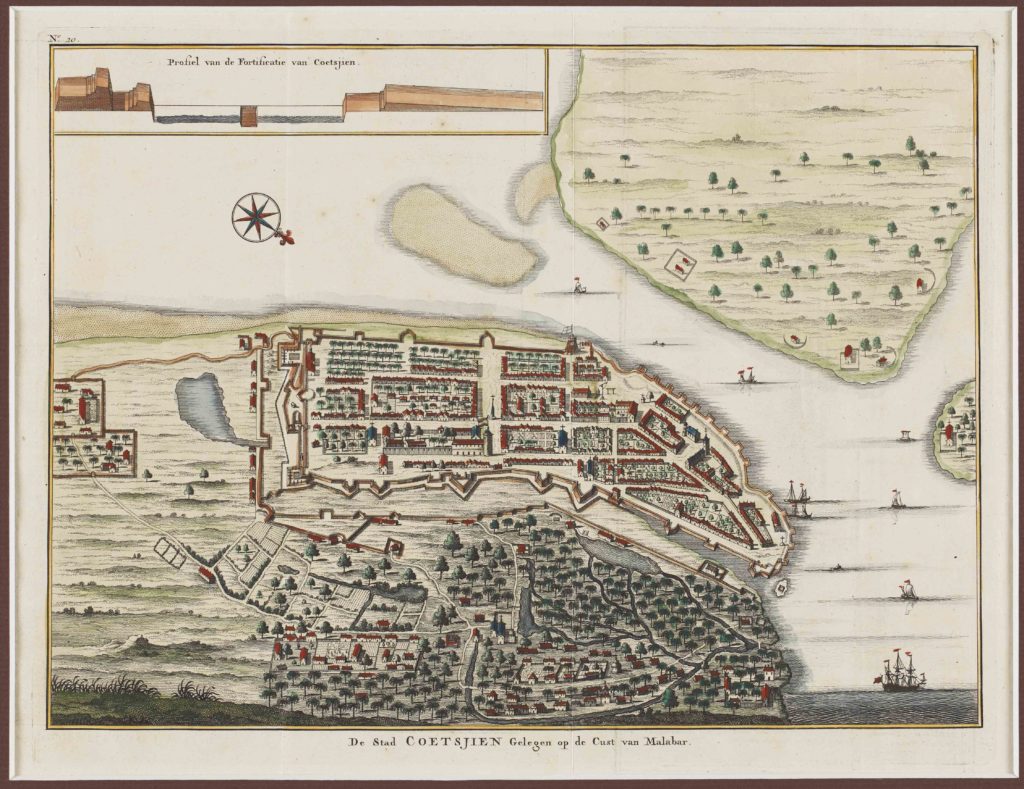 ‘The port of Kochi’ by François Valentyn, 1724 © Sarmaya Arts Foundation—click to read more about this map

Ask Google who first discovered India and the answer is “Portuguese explorer Vasco da Gama discovered a sea route to India in 1498.” Unbelievable! What about the ancient trade route known as the Silk Road from China to the West via India that promoted the exchange of western and oriental civilizations for centuries?  Both the 6400 km land route taken by caravans as well as the maritime trade route carrying cargo passed through India. The former crossed North India whereas the latter passed through the coastal belt of south India.  As my focus is on Kerala Maritime history, discussed here is the scenario prevalent in south India in those times and the impact of trade on this part of the world.

Indian Ocean trade had a prominent place in world economic scenario and in linking several people and cultures. The Indian Ocean borders the African continent and connected the Mediterranean through the Red Sea, the Middle East via the Persian Gulf, makes a U shape touching both shores of the Indian subcontinent, Sri Lanka and across the Bay of Bengal links up with South China seas. There is no single maritime tradition for the entire Indian Ocean region. Instead, there are local traditions suited to a particular maritime environment and set of human needs. Medieval Kerala is a case in point! The geographical location of Kerala, its extensive coastline, and the course of monsoon winds set the rhythm of sea trade here.

Kerala is referred to as ‘Garden of Spices’ according to Sumerian records. Merchants from Babylonia, Assyria, Egypt, Arab, Greece and Rome have visited this part of the land for trade. Judaism was one of the first foreign religions to arrive in India. It is believed that King Solomon had visited Kerala for trade purposes. In the 6th century BC, the Jews came to Cranganore (which the Jews referred to as Shingly) to escape from the Babylonian captivity of Nebuchadnezzar. Later many more Jews landed here and settled in Kodungalloor (Cranganore), Parur, Palayur and Kollam. Records say Jews were traders and remained loyal to the native rulers, in return the Jewish leaders were granted distinctive privileges and honours by the local rulers and land to make houses and synagogues. To this day, Kochi has a Jewish Street, a functioning synagogue and a handful of Jewish descendants. The copper plates granted by the Chera ruler in 1000 CE bears evidence to the influence the Jews enjoyed in the domestic and foreign affairs of pre-modern Kerala. When St Thomas came to Kerala, there was a large number of Jews already present here and initially, they were tried to convert to Christianity.

Hoards of Roman aureus (coins) and pottery were discovered from various parts of Kerala and Tamil Nadu, pointing towards Indo-Roman trade in the early centuries of the Christian era. This is a great story that connects with Kerala Maritime History. Contemporaneous to the Roman Empire, south India (comprised of Kerala, Tamil Nadu, and parts of Karnataka, Andhra and Sri Lanka) was ruled by Chera, Chola and Pandiya dynasties from 6th century BC to 3rd century CE, known as the Sangam age.

With the decline of the Roman Empire in the 5th century CE, trading with Rome ended. Though Chera, Chola and Pandya powers saw a decline with the rise of Kalabhras, it was short-lived. The three powers revived again during the eighth and ninth centuries. The ordainment of Pallava kingdom (A.D 600) witnessed the development of several trade organizations and economic activities in south India. Some of the ports in the coastal towns were Sopara, Ozene, Kalyana, Tyndis, Naura, Muziris, Nelcynda, Masalia, Sopatma, Kolkar etc. These ports are significant elements of Kerala Maritime History.

The history of people of South Asia is mainly documented in the literature written in the Sangam period. People were divided into five different clans based on their profession:  Mallars (farmers), Malavars (traders), Nagars (border security), Kadambars (forest people), Thiraiyars (seafarers) and Maravas (warriors). Each clan spread across the land and formed individual settlements. Seafarers obviously lived in the coastal region and the traders came to live in Kerala, western Tamil Nadu, eastern Andhra Pradesh, and southern Sri Lanka.

The growth and development of trade and urbanization in medieval Kerala was a synchronized process. Agricultural production was the mainstay of the economy of Kerala in the medieval period. The land was given much importance as it was the main source of production. The very unique environmental peculiarities of Malabar supported the growth of several varieties of pepper, cardamom, ginger, cinnamon, nutmeg and cloves. Pulses and grains were also grown and the forests produced various species of trees such as teak, veetti, trimbakam, angili, arani and mahagoni.

The ballads, anthologies, inscribed sources and oral narratives refer to agricultural prosperity in the rural areas. Growth and development of agriculture in the hinterlands brought about plentiful availability of surplus. The excess agricultural crops and grains were bartered for other necessities in angadis or trading centres, turning the ports to cities. Traders used coins especially in foreign trade to export spices, muslin, cotton, pearls and precious stones to countries of the west and received the wine, olive oil, amphora and terracotta pots from there. Egyptian dinars and Venetian ducats (1284-1797) were in great demand in medieval Kerala’s international trade.

The Arabs and the Chinese were important trade partners of medieval Kerala. Arab trade and navigation attained a new enthusiasm since the birth and spread of Islam. Four gold coins of Umayyad Caliphs (665-750 CE) found in Kothamangalam (Ernakulam district) testifies the visit of Arab traders to Kerala in that period.  With the formation of Abbasid Caliphate (750-1258 CE) the Golden Age of Islam began and trade flourished as the religion was favourably disposed towards trade.  Ninth century onwards the Arab trade to Malabar was raised to new esteems and saw many outposts of Muslim merchants. This, later on, became a strong element of Kerala Maritime History.

The Trade with Malabar resulted in the drainage of Chinese gold in abundance that the Southern Sang Government (1127-1279) prohibited the use of gold, silver and bronze in foreign trade in 1219 and silk fabrics and porcelain was ordered to be bartered against foreign goods. Pepper, coconut, fish, betel nuts, etc were exported from Malabar in exchange for gold, silver, coloured satin, blue and white porcelain, musk, quicksilver and camphor from China.

Traffic on sea route increased by the second half of the eighth century CE as the Chinese and the Arabs had a tough time fighting the regional tribes on the land route. By the beginning of the 15th century, Kozhikode had developed into a great emporium of international trade.  Kerala coast used to be studded with settlements of traders. These settlements were due to commercial and climatic compulsions. Sailing with south-west monsoon wind, traders from the West would come to the western ports of India. Incapable of reaching Malacca and Canton in a single monsoon, they were forced to stay along Malabar Coast and thus the region became a stopover for the merchants from the west. Traders had to wait for favourable winds or stay in the port for collecting cargoes. Though pirates were very active in a number of ports along the western coast, foreign traders and their merchandise were safe at Kozhikode. The security of her waters, as well as the efficient facilities for trade, attracted foreign traders to Kozhikode.

Before 1500 Europe was largely self-sufficient. By late 1500, many sea explorers took a series of voyages to reach India, in the hope of establishing direct trade between Europe and Asia in spices. With Vasco da Gama landing in Kozhikode, he opened the way for an age of global imperialism and the Portuguese established a colonial empire in Asia.

Portuguese commercialized agriculture. Through this enriched the economy, the beneficiaries of this richness were not the common man. Trade exposed our rural economy to the international money market in terms of the price of spices which resulted in the enhanced use of coined money. The maritime cities of this oceanic trade system were Venice, Alexandria, Hormuz, Aden, Cambay, Kollam, Kozhikode, Malacca, and Canton.

By the closing decade of the 15th century the first Portuguese trading post in India was established at Kochi and the trade there was comparable with that of Lisbon. Kochi saw powerful merchant families with wide connections in the inter-Asian trade. One such family was that of the Mamale Marakkar who had well-established trade connections with the East Indies. In the beginning’ of the 16th century, this merchant used to supply pepper to the Portuguese in large quantities in return for copper.

Horse trade had great economic and political significance in those times. Thousands of fine quality horses were imported to the Malabar port from the trading centres of the Red Sea, especially Hormuz. Kulamukku and Kannur were centres of the lucrative horse trade. The ruling powers of the Deccan especially Vijayanagar obtained horses from Kannur. To monopolize the horse trade, the Portuguese captured Hormuz and shifted the arrival of horses to the port to Goa, reducing the significance of Kozhikode in trade.

The Dutch annexed Kochi by defeating the Portuguese and ruled from 1661-1795. With the British occupying the Malabar in 1795, the Dutch had to go back. In the 18th century, the British built up a well-knit commercial network in the Indian Ocean and took over the entire trade rights.

With the archaeological excavations carried out at Muziris, Kerala Tourism is ready to implement an ambitious project this year called ‘Spice Route’ to rediscover the stopovers along the 2000-year-old trade route on the Indian Ocean.

Tyndis is an experiential travel company based in Kerala. It curates local heritage, culture and food experiences using the community-based sustainable tourism model. The company derives its name from Tyndis, a port in 2,000 B.C.E on the Malabar Coast. Explore more of Kerala and South India with Tyndis Heritage.