Made in China, made in India, Japan, Thailand, Indonesia, or even Turkey, the tradition of shadow puppets has survived for a long time, the second century BC, some say. But as is also custom, scholars have many disagreements on its origins. Folklorist Stuart Blackburn suggests that this tradition, like Buddhism, travelled to the rest of Asia from India. Where it thrived elsewhere, in its birthplace, it was relegated to the shadows. Others speak to the sophistication of the Chinese puppets and the availability of its specific historical records, saying, surely, the Hans were the first. But like the tradition itself that has evolved to stay relevant, puppets have changed hands, puppeteers have changed tribes, tribes have moved and wars have taken them. Even in India, the puppets left their Maharashtrian home and migrated south.

Sidin Vadukut, who was my gateway as an adult, into history, believes historians aim for nothing higher than to answer what really happened in the past. Yet they hardly manage to concur. So, in the absence of archaeological consensus and sometimes evidence, we can remove ourselves from the pursuit of theory to something more compelling – origin stories. These are impossible ideas, legends and myths that both follow its subject and arrive before it in the form of lores and expectation. Since the puppets are born from death, constructed from the hides of goats, donkeys, or buffalos, the world of shadow theatre is enriched by spirits. Thus, stories here are more suitable points of discussion than most chicken or the egg arguments.

Ghosting and self consciousness 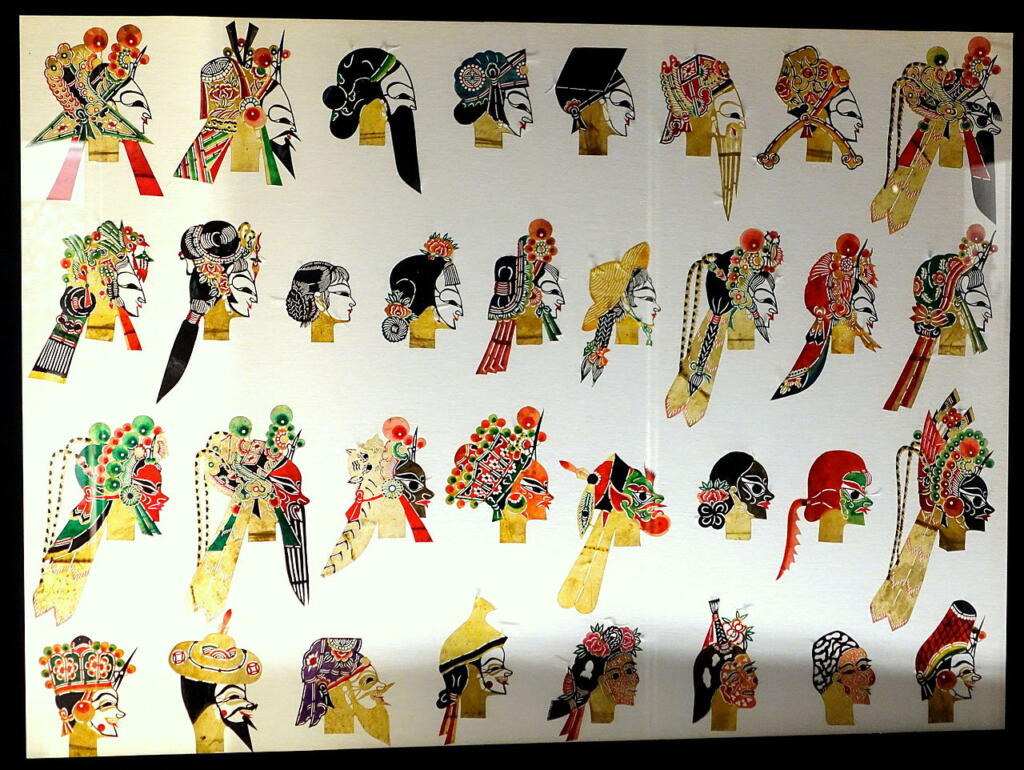 From China comes the tale of Emperor Wu’s woe. According to the Book of Han: the Empresses and Imperial Affines, the Emperor of the mighty Han dynasty couldn’t forget the love of his life, beautiful Li, who died tragically young. Shao Weng, an alchemist volunteered help, he would, he said, conjure her spirit. He set up a mood with candles, fine dining and wine at night…in a tent… Only, Wu was in another tent and told that he couldn’t approach the spirit to come. At night, an apparition visited them. It was the figure of Li. She came in softly and departed slowly. “Was that you? I stood up to look at you. Yet you never came,” Wu wrote a poem.

Performers of Wanwanqiang inherit another popular Chinese legend. Perhaps as an outcome of the first Chinese whispers, some think it was Duke Zhou, others avow it was Confucius of the Zhou dynasty, who was terribly conscious of his appearance. He hid his ugliness behind a screen while speaking and swaying crowds. But audience members complained that they could not see him at all. His solution was to light a lamp behind him and let the people see his shadow. And he was so beloved that others made puppets in his likeness and carried forward the tradition.

Unlike most other shadowplay traditions, there are no available written texts of its Turkish counterpart. Passed on orally from generation to generation, the Middle East presents a story. Once upon a time in 8th century Kufa, a Jew by the name of Batruni put up a show of phantoms. His act consisted of a brilliant shadow impression of the Arabian king Qail cutting doughnuts around the mosque yard on horseback. But not only was the shadow show condemned as sorcery, Batruni was also put to death.

There’s another Turkish story about shadows and death. Karagoz and Hacivat were two quarrelling workmen in the Ottoman times, engaged in building a mosque (or a palace in some versions) in the city of Busra. Their constant bickering was so amusing that other workers stopped to listen. And because everybody was laughing so hard their bellies hurt, work progressed slowly. This unusual delay made the sultan lose his temper. He ordered the destruction of its cause –– death to Karagoz and Hacivat! However, soon after their execution, along with the other workmen, the sultan too was overcome with remorse and grief. A courtier came to his rescue. He resurrected Karagoz and Hacivat through leather cut-outs in shadow plays, and turned them immortal. We can still hear their banter and the accounts of their adventures.

The puppeteer fares somewhat better in the Malaysian ethos. The leading puppeteer or dalang is supernatural. He holds the door between light and dark, the spirit realm and the real world. He is the performer of all roles, and travels everywhere while sitting in one place. Malaysian shadow art requires puppeteers to have magical aptitude or knowledge known as Ilmu Dalam. Without it, how ever can the dalang chant incantations to awaken the spirits before a performance?

A renowned puppeteer from Kelantan, Dalang Hamzah, is quoted in Beth Osnes’s book on the topic as saying, this magical knowledge is like sugar in tea. One can certainly drink tea without sugar, but tea is better with sugar and the performer, better with magic. This inner magic is necessary to experience the agin or “wind” – the ability to be swept away in performance – causing the great flood of emotions. So potent is this inner magic that a dalang possessing the agin must perform regularly or else he will fall ill. This magical knowledge is like a knife, it can be used both for good or evil, so the dalang is secretive and mistrustful, perpetually shrouded in mystery. They do not impart magic to just about anyone. 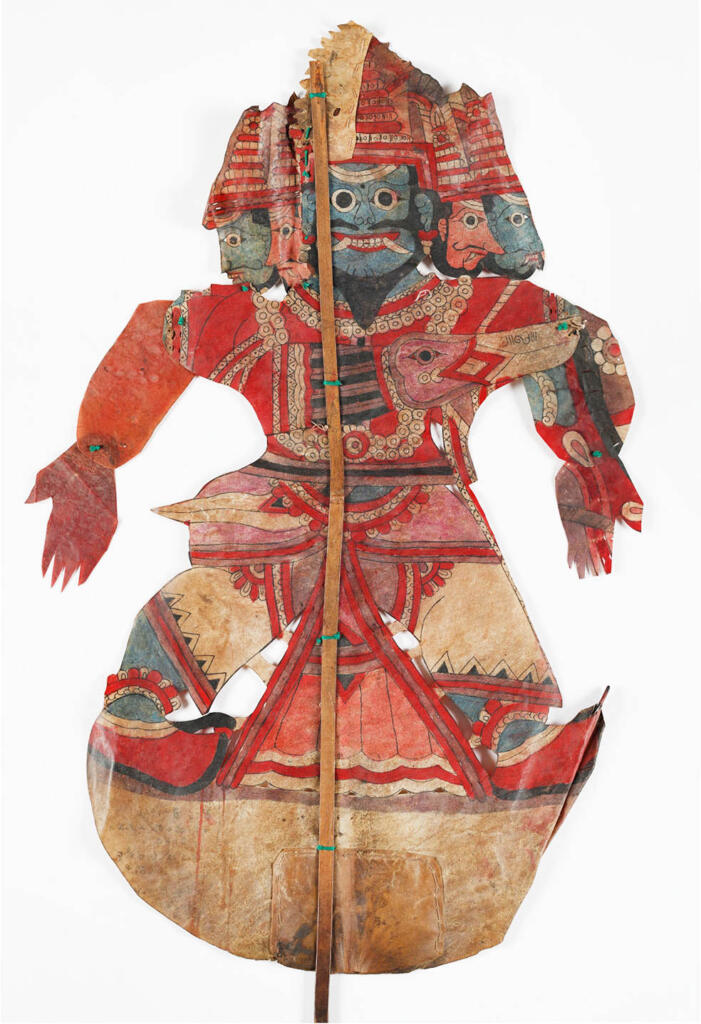 The Indian origin stories are epic. S.A. Krishnaiah, the founder director of Oriental Archives Research Centre (Prachyasanchaya), Udipi, shares a snippet from the Ramayana recited by the famous Karnataka puppeteer, Tyapenahalli Hombaiah. One day, sister to the slain king of Lanka, Shurpanaka urged a pregnant Sita to illustrate a portrait of Ravana on a piece of leather. Worried about her reputation, Sita refused. But Shurpanaka insisted, “Draw only the toe!” By drawing only the toe, Sita’s chastity would still be intact. This literal foot in the door trick worked and slowly, Shurpanaka pestered Sita to draw the torso and the head, till the portrait was complete, fingernails and all. Finally, she dared Sita to bring the portrait to life to prove that she had never been molested by Ravana. Sita took the bait and breathed life into the leather. Not only did this chimera stand, it stalked Sita around like a shadow of her guilt. She had to compartmentalise, she locked it up in a box. However, Sita couldn’t bear the secret for too long. She confessed to Rama, who immediately shot an arrow into the puppet, tearing it into two.

Years later, Rama was preparing to leave the earth. He had just finished distributing all his possessions among his subjects when a hunter called Guha approached him. He had come to claim a boon from Rama for a favour he had once done Lakshman and Sita in rowing them across the Ganga river. But Rama had nothing left, save for the torn portrait of Ravana. He gave Guha the puppet, commanded him to sew up the tear with his sacred thread and perform his story all over the world. Thus, Guha lost his sacred thread and became Gombe Rama, or the puppet of Rama. In another, less complex and more justifiable version, the ferryman wept as Rama was leaving. “What are we to do now, Lord? You are leaving us!” Guha professed. Rama, moved by Guha’s sorrow, gave him his image and told him to use it to tell his story.

Do you believe in magic?

I wished to end these folktales with a happily ever after but too many have called the shadow theatre an endangered art. To love shadow puppetry is to love magical realism since the genre flattens out any naturalism into two-dimensional imagination. In 1996, in an attempt to contemporise the tradition, the Indian government had arranged a festival dedicated to the art. Along with episodes of the Ramayana and Mahabharata, the puppeteers were charged with performing a new theology taking episodes from Mahatma Gandhi’s life. But the effect was contradictory. Salil Singh writes that unlike Hanuman, the hero Gandhi couldn’t fly around and burn a city to ashes. The puppet Gandhi was rendered insipid. However, existing performing troupes constantly try to expand the repertoire and still stay within the realm of myth. I think they will survive, even if it is in the shadows. To me, the loss of this art cannot indicate the effacing power of technology. It’s a signal that we’re not as spiritual as we were, but a few of us still believe in magic.

1. Inside the Drama House: Rama stories and shadow puppets in South India by Stuart Black

3. Karagoz, the funniest man of shadows by Ayse Betul Kayahan

5. The Shadow Puppet Theatre of Malaysia by Beth Osnes

6. If Gandhi Could Fly…: Dilemmas and Directions in Shadow Puppetry of India by Salil Singh

7. The History of Chinese Shadow Art by Google Arts and Culture

8. Shadow Theaters of the World by Fan Pen Chen