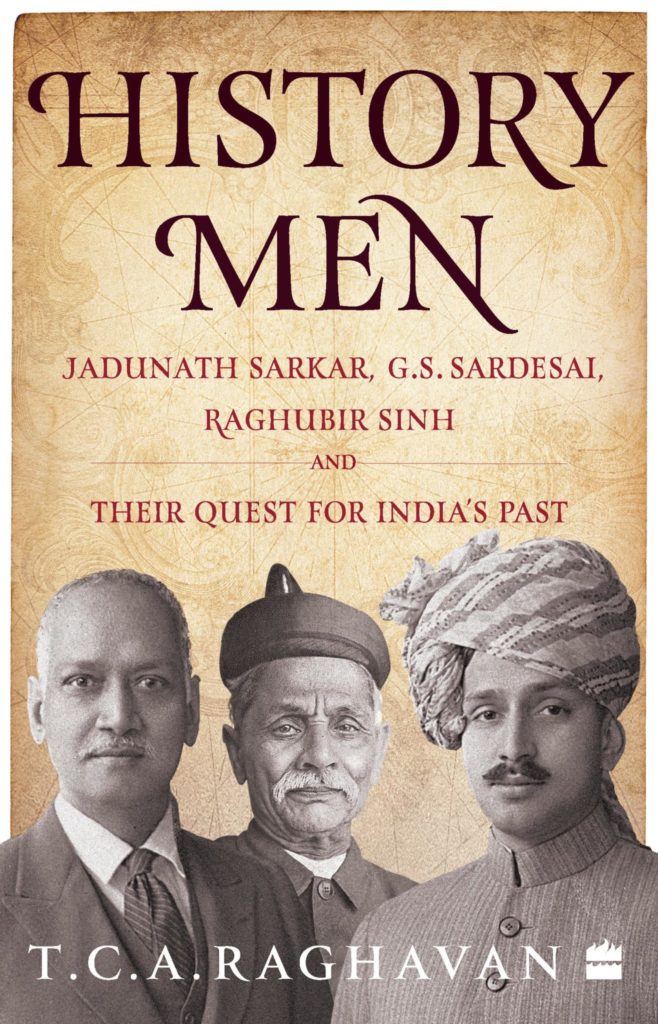 “I think they would have been dismayed at the way the past is being recast to suit the beliefs of various groups,” says TCA Raghavan when asked how the 20th century historians he has become fascinated with would react to the virality of fake news. Through the years he has spent thinking, researching and writing about the titular characters of History Men: Jadunath Sarkar, G.S. Sardesai, Raghubir Sinh, and their Quest for India’s Past, the former diplomat and author has got under their skin to explore not just their work but also their unlikely friendship.

Delving into the history of historians might seem quite coolly ‘meta’, but what compelled Raghavan to write his most recent book was this more personal story.  It’s about the bond between a professor, a civil servant and a scion, brought together by their pursuit for historical truth. Together, they trekked long and hard for research while battling pay cuts, ideologues and, eventually, age. Raghavan’s career as former Indian High Commissioner to Singapore and Pakistan and qualification as the holder of a PhD in History from JNU, Delhi, exposed him to a diversity of perspectives and sources necessary to write an unusual book like this one. As an author too, his earlier work has prepared the ground for History Men in an indirect way. Sarmaya’s conversation with the author questions how this book came to be and what it can teach us about the ways in which we process history in the Subcontinent.

Your last book was on two extraordinary Mughal courtiers—did you pick up the threads that led you to write History Men during the research for Attendant Lords?

“The Curious History of India-Pakistan Relations (2018) was my last book, which was basically a history of the personalities who played a role in fashioning Indo-Pak relations. Both it and my first book Attendant Lords: Bairam Khan and Abdur Rahim, Courtiers and Poets in Mughal India on the Mughal courtiers, were in some ways explorations into the ways history can be written, so to that extent I suppose they were precursors of History Men. And yes— I first visited Raghubir Sinh’s library about twenty years ago to see some material, not available elsewhere incidentally, on Bairam Khan and Abdur Rahim Khan-i-Khanan.

“I read Sarkar’s works as a student and I came to know of the remarkable correspondence between Sarkar, Sinh and Sardesai, and became fascinated by their friendship and their discussions on history. When I visited Raghubir Sinh’s library in the course of my research into Rahim, who is the subject of Attendant Lords, I got a more granular feel of the friendship between the three and also their deep commitment. I don’t think I thought of it as a book initially, but as I dug deeper it became a possibility and each subsequent visit to Sitamau [the princely state that Sinh’s family ruled] reinforced that feeling. I took an active interest in the trio for about two decades—not so much as doing research or writing but in thinking about them.”

Did you feel a kinship with the three historians while researching this book? For instance, like not being able to secure certain sources?

“Yes, I did. Also in the late 1970s when I was beginning studying and researching history, material conditions were similar to those half a century earlier—no internet, no or very rare photocopiers, no digital sources etc. Today things are so much easier. I really enjoyed delving into that part of the three History Men—the use of manual copiers, the difficulties in tracing a manuscript, the enormous dependence on the post etc.”

Given how much more our world is connected today, is it easier for contemporary historians to forge the collaboration these three History Men enjoyed, or are there new barriers to that kind of association?

“It’s definitely easier — we now have email, skype and cell phones. Academic conferences are an established form of exchange. But I don’t know how much travel historians do together nowadays—finding a battle ground, establishing the likely route an army took, visiting a fort etc.”

Do you think some perspectives were excluded by Sarkar, perhaps the most influential of the three historians? Would you put that exclusion down to ideology, training, access to material or something else entirely?

What is something contemporary historians must do differently than Sarkar, Sardesai and Sinh? And what must they emulate?

“I think Sarkar and Sardesai, and Sinh too but to a lesser extent, because of the hostility they faced from different quarters ended up ring-fencing themselves out of the mainstream. It did bother them, but not too much. Historians today should avoid getting trapped in self-contained echo chambers. I think there is also something to be learnt from a time when the distinction between academic and non-academic history was not so watertight.

“If you manipulate the past to justify present positions, it’s always dangerous. The History Men, too, came under various pressures—nationalist, or because of their patrons or identities—but, by and large, they withstood them.”

You have told the story of three historians who took a lot of trouble to be context-sensitive and accurate. If you had to imagine how they would react to the scourge of viral fake news, how would you do it?

“I think they would have been dismayed at the way the past is being recast to suit the beliefs of various groups. They had an abiding commitment to accuracy and documentation. Of course their interpretations were functions of their personal ideologies. But they presented the facts as they knew them and the reader could come to differing conclusions. The point is they presented the facts as they know them—they didn’t suppress or invent any.  Bollywood’s historical extravaganzas on significant battles, emperors and so on—with all the creative license they employ—would have really baffled them. The recent film Panipat for instance would have left them totally bemused.”

In the case of India-Pakistan relations, we’re talking fairly recent history, hardly even a century old. What are the unique challenges in researching a topic that lies within the living memory of many of the citizens of the Subcontinent?

“It is difficult to be objective in the face of public opinion, which is ultrasensitive about anything which they feel is detrimental to national positions. There is the opposite aspect also—of bending over backwards just to appear fair and even-handed, political correctness in other words. These two sets of pressures certainly pose challenges. I think historians have to be conscious of both pitfalls.”

How does your training and your long career as a diplomat influence the way you see and interpret the history of the subcontinent? Do diplomats make for natural historians?

“I would think that an awareness of the back story of the task one is engaged in is an attribute of most professions. My background in history has certainly influenced the way I look at diplomacy and the issues that impact relationships in the subcontinent are so bound up in the past that it is necessary to have a sense of it. I’m not sure if diplomats in particular are ‘natural’ historians—but it definitely helps to have a sense of what went before.”

Does being a former High Commissioner to Pakistan give you access to any archives or narratives that aren’t freely available to other Indian historians?

“Each of my three books are on themes that I have worked on for many years –– so they were very long-term projects.  My experience of living in Pakistan and dealing with it professionally certainly is a factor in the book The People Next Door. Living in Pakistan also made me more aware of different perspectives on our medieval history. I did a lot of the research on Attendant Lords and History Men when I was still in service whenever I got some time. I certainly received a lot of help from people in accessing archives and collections because they were intrigued by the idea of a civil servant or a diplomat spending his free time on historical research and went out of the way to help me. But otherwise I had no special access or sources.”

History Men: Jadunath Sarkar, GS Sardesai, Raghubir Sinh And Their Quest For India’s Past by TCA Raghavan is published by HarperCollins India

Eisha Nair is Content and Curatorial Associate at Sarmaya