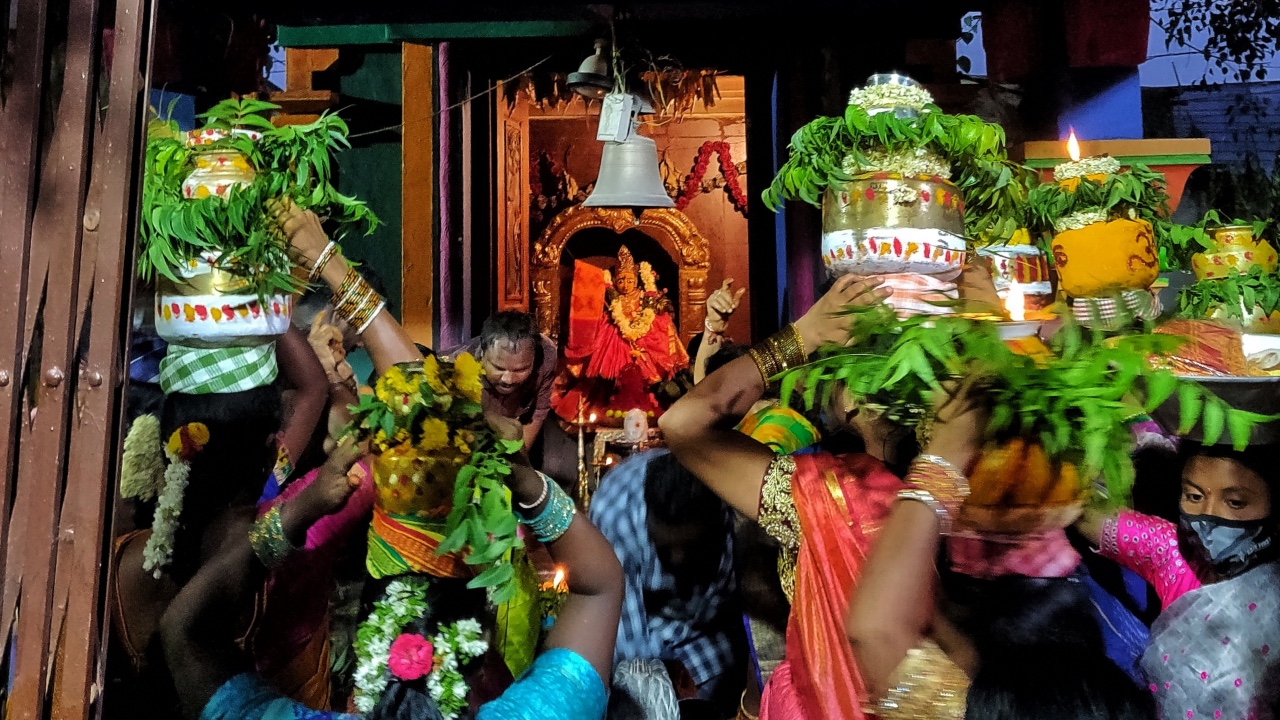 During the celebration of Bonalu, devotees make food offerings to gramadevatalu, such as Peddamma here, as a form of thanksgiving for the past and prayer for the future. Photograph by Vivek Joseph

It is believed that the goddesses who guard the Telugu lands are sisters: sisters who watch over its crops and water bodies, control its diseases and calamities, protect its settlements and peoples. These are the gramadevatalu, village or local goddesses, also simply called the amma vaaru, the mothers. They, like the other local deities of the land, emerge from and are primarily worshipped by the Dalit and Bahujan communities of the regions who continue to nourish their traditions.

A number of belief systems surrounding tutelary mother goddesses can be found across the Subcontinent. Much like the others, in the Telugu traditions each of the goddesses are tied to the land and the communities they protect through bonds that are strengthened over the course of the year with acts of propitiation and celebration.

Nowhere is this truer than in the northern Telugu lands of Telangana.

Here, it is hard to miss the gramadevatalu. Their shrines can be found dotted across the land’s fields or hilltops, or in the bustling neighbourhoods of its capital, Hyderabad. The purpose of these spaces is quite simple: as communities settle and establish themselves in an area, they inevitably bring with them their deities to protect them from disease and calamity, thus ensuring their survival. Shrines to those of the sister-goddesses who also act as patrons of specific caste communities are often also set up.

In these spaces offerings of food and sacrifice are made to the deities to vouchsafe and acknowledge their protection, especially during Bonalu, the largest celebration for the gramadevatalu in Telangana.

Some say there are seven of them, others eight, a hundred and one, or even a crore. Those counted in the set of sister-goddesses, vary by regional, village, caste and familial belief. However, there are some sisters who will almost always be included in the listings in Telangana. 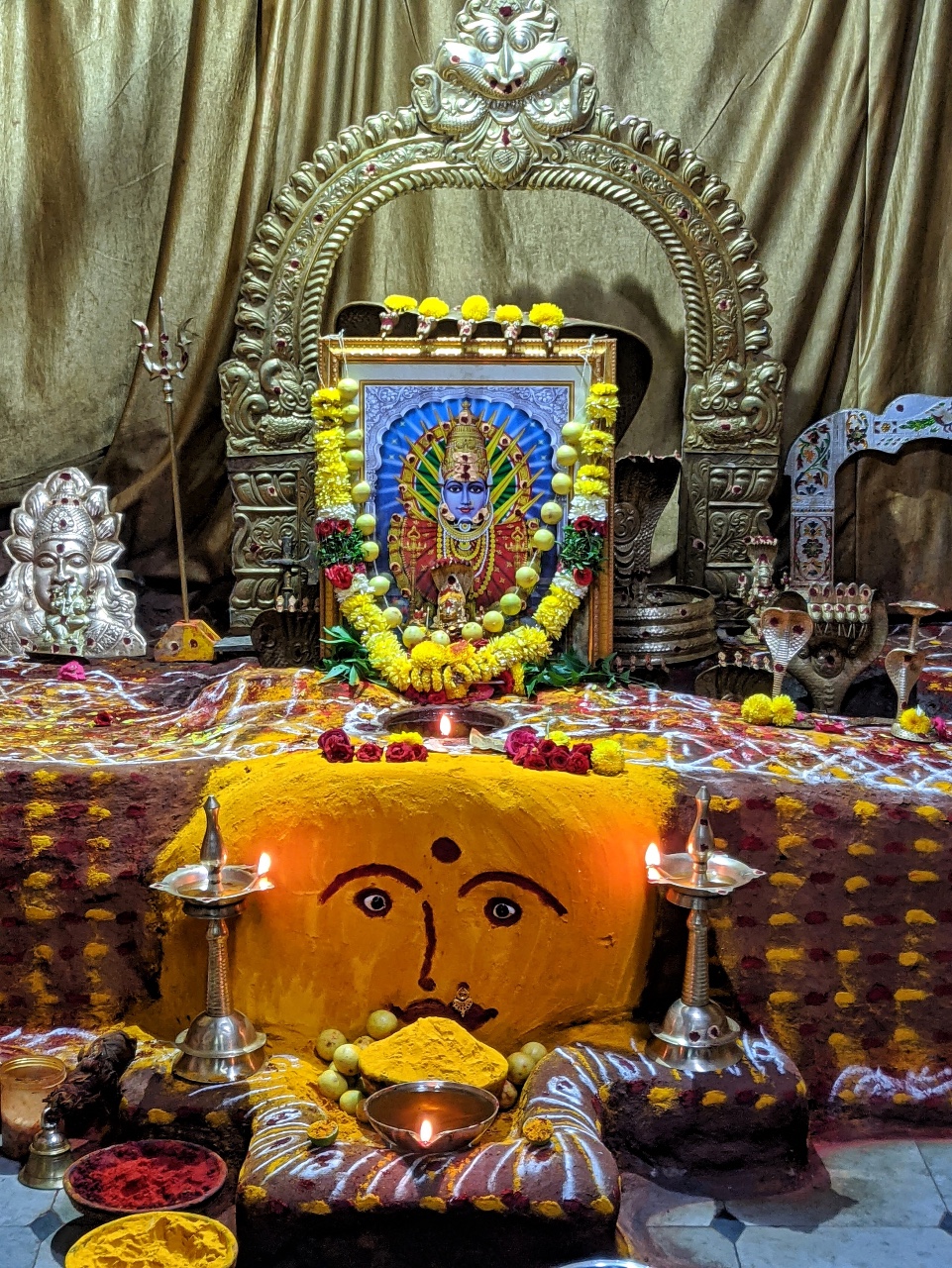 A shrine for Yellamma in the campus of Osmania University, Hyderabad. While Yellamma’s most popular depiction is that from Karnataka where only her head is worshipped (pictured in the frame placed on top), in Telangana there is no specific iconographic tradition. Here, Yellamma is worshipped in the form of an altar made out of clay from a termite-hill with an aniconic image of the goddess marked with turmeric. Photograph by Vivek Joseph

The most well-known and widely worshipped of the gramadevatalu, much beyond Telangana, is Yellamma. Found across the Deccan, the heart of Yellamma’s cult lies in the regions of Telangana, northern Karnataka and southern Maharashtra where many communities consider her to be the primal mother goddess. The story of Yellamma has over time been connected to that of Renuka, the mother of Parashurama, the god Vishnu’s sixth incarnation in Sanskritic Hindu tradition, such that she is often referred to as Renuka Yellamma. However, oral narratives of Dalit-Bahujan communities surrounding Yellamma, including those that connect her to Renuka, indicate her roots within their own communities, and particularly the Dalit peoples of the region, such as the Madiga in the Telugu country who play a major role in the Telugu saga of Yellamma. The Madigas, the community of tanners, animal scavengers and leather workers, consider Yellamma their tutelary deity as do several other castes including Gouds – the toddy-tappers – and Kummaris, the potters. 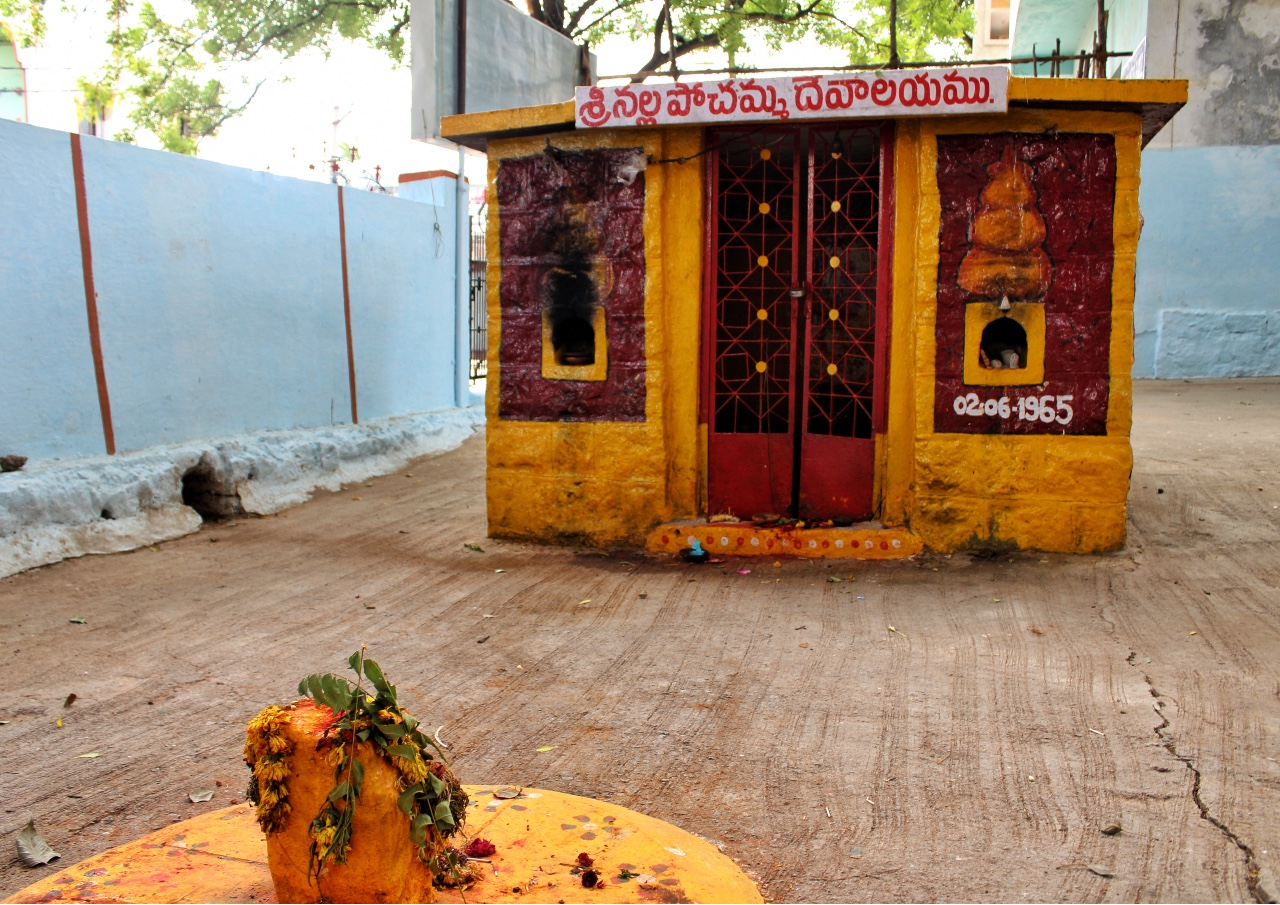 Pochamma is also well-known as Nalla Pochamma, or ‘black Pochamma’ referring to her dark skin. Some consider Nalla Pochamma to be a separate goddess in her own right, such as here in a shrine to the deity in a slum in Hyderabad, built to by the local Madiga community. Shrines to the gramadevatalu are often quite small and surrounded by open spaces where the community can gather. Photograph by Vivek Joseph

Second in popularity only to Yellamma is her sister Pochamma, almost exclusively worshipped in Telangana. Pochamma, or Poshamma as her name is pronounced in Telangana Telugu, is a primal protectress of entire settlements, safeguarding their boundaries and all who lie within. She is also attributed as the controller of poxes and measles, with festivities such as Bonalu acting as moments for the faithful to propitiate her protection against these diseases. One myth attributes the tradition of offering bonam or food offerings in Dalit-Bahujan religious practice to have begun with this need to honour Poshamma to ward off disease. 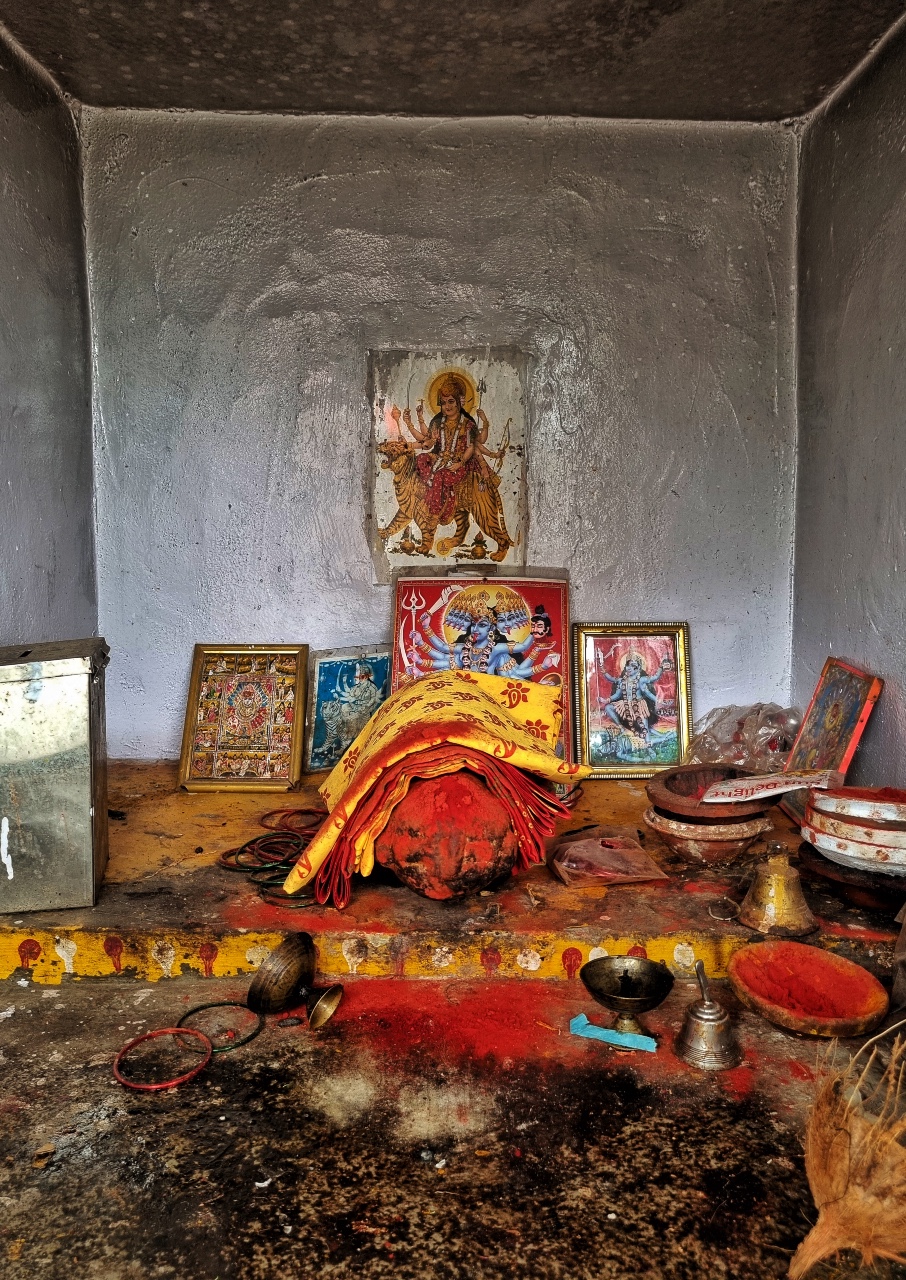 Maisamma protecting a slum community of Vadderas from her shrine on the banks of the Musi River in Hyderabad. Here Maisamma, as in most shrines to the gramadevatalu, is worshipped in the form of a rock smeared in vermillion and draped in a sari. The spirit of the goddess was invited to reside in the rock when the shrine was established. Photograph by Vivek Joseph

Poshamma and Yellamma’s sister Maisamma, another Telangana gramadevata, is she who protects water resources and crops. Maisamma’s shrines are thus generally found on the bunds of village tanks or by lakes and rivers, giving her one of her most popular titles – ‘Katta Maisamma’, Maisamma of the tank or embankment. If one passes any waterbody in much of Telangana one is bound to find a Maisamma shrine somewhere in the vicinity. Apart from also being a general village guardian, she is caste protectress of the Vadderas, the Telugu caste of stone-cutters, carvers and well-diggers.

Apart from these three, there are Mahankalamma and Durgamma, localised versions of the pan-Hindu deities, Mahankali and Durga. In recent times, the gramadevatalu are increasingly considered to be forms of these two goddesses, but for much of their history, these deities have had independent identities.

Other popular sister-goddesses in Telangana include Peddamma, literally ‘big mother’, considered the oldest of the gramadevatalu and protector of the Mudhiraj caste; and Muthyalamma, believed to control disease and guard  settlements. The list goes on. Deities of neighbouring peoples, such as Sammakka and Sarakka of the Adivasi Koya community, are also worshipped by Telugu Dalit-Bahujan communities in the traditions of the gramadevatalu.

Vivek Joseph is a social worker and independent researcher based in Hyderabad. He specialises in religious anthropology and development research, working on documenting and exploring the beliefs, practices, spaces and communities connected to the religious cultures of Telangana and wider southern India.

Ilaiah, Kancha. Why I Am Not a Hindu: A Sudra Critique of Hindutva, Philosophy, Culture, and Political Economy. India: Samya, 1996.

Padma, Sree. Vicissitudes of the Goddess: Reconstructions of the Gramadevata in India’s Religious Traditions. USA: OUP, 2013.