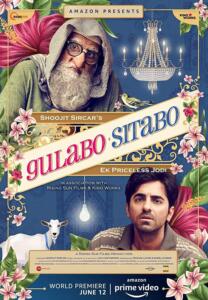 I am desperately late to the Gulabo Sitabo Netflix watch party (or Amazon in this case), but in my defence it was catching virtual dust while sitting at the very top of my watchlist and this is just how movie screenings and time work now. How ironic it is that this film was released in the lockdown, but the theme of evolution is all the more resonant because of it. Characters inside the film pay the ultimate price for being unable to adapt, a lesson being forced upon us in times of Corona – change or die – and director Shoojit Sircar has demonstrated it for us, by adapting to the OTT platform rather than waiting for a theatrical release.

Just as we’re sitting at home, obsessed with going out, the characters in the film are doing the exact opposite. Young tenant Baankey (Ayushmann Khurrana) and old self-appointed landlord Mirza (Amitabh Bachchan) are constantly fighting to keep the scenic and decrepit haveli, Fatima Mahal, and kick the other out. On the one hand Mirza is constantly stealing from his tenants. He cuts their power, and access to spare toilets when the common latrine is rendered useless. On the other hand, Bankey doesn’t pay rent, even though it’s as little as Rs. 30 .

This warring duo are representations of Gulabo and Sitabo, the traditional glove puppets from Uttar Pradesh that appear in one of the earlier sequences in the film. Sitabo is the old worn-out wife and Gulabo, the new mistress. We are entertained by their constant bickering and I imagine their competition stems from their position in relation to their man. But our Gualbo and Sitabo are fighting to secure their position at the Haveli, which belongs to Mirza’s wife, Fatima Begum.

It’s hard to miss the significance of the puppet show in the film but the show (like all shows) is a decoy, a veil we must lift to discover the real puppet master. I’m reminded of the moment when Alexander of Luis Buñuel’s film Fanny and Alexander, walks through a grand house filled with brilliant and vivid puppets, and chances upon ‘God’. When Alexander asks “who is behind the door?” a disembodied voice replies, “it is God.” Alexander proceeds to ask him what he wants and ‘God’ replies that he merely wants to prove he exists. Alexander cowers under the table, afraid that seeing this heavenly spirit will be the end of him, but ‘God’ emerges as a puppet – merely a different kind of decoy. The real puppet master will never be seen. It exists only in its interpretation.

It is easy to imagine Mirza as puppet master number one, always discreet and yet constantly exerting control. He takes care of the Haveli and attempts to control its pests. But Baankey emerges as an equal and powerful foe. As the fight escapes the battleground of the Haveli, and extends to different players, the real leeches emerge. Gyanesh Shukla (Vijay Raaz) and Christopher Clarke (Brijendra Kaala) are characters that care only for the inherent value of the Haveli, unlike Mirza and Baankey, to whom the Haveli represents a dream. We are led to believe that Gyanesh and Christopher are the real puppet masters manipulating Gulabo and Sitabo to their end but ultimately they also do not wield any real influence. Here, one can argue that Fatima Begum must be the real engineer as she has entranced Mirza into a life of service, only to take away the old mansion later, much like a director might do by engineering a complication in the story. But in the same organisation of logic, the true puppet master is the Haveli itself, having moved all the players in the story into action, having committed the most powerful player Fatima Begum herself, into a life of servitude. She has had to sacrifice her love for the man she had intended to marry, all to prevent her separation from the home of her girlhood days.

The Haveli, our invisible hero and puppet master, is a figure of intrigue, like the Hill Mansion from Netflix’s Haunting of Hill House. While each character has their own motivation to be drawn by the house, the Haveli draws us too. What magic power does it hold? Is it a fading photograph that allows us to peek through a portal into dusty Lucknowi decadence? What magic can the bones of ‘old’ India hold for us? After all, unlike Gyanesh Shukla, hum thode hi ‘Archaelogy’ hain! (After all we aren’t ‘Archaeology’ like Gyanesh Shukla). Perhaps it is because the Haveli is the only ‘true’ custodian of the past amidst the clutter of characters that lay claim to the title. Fatima Mahal is authentically Lucknow. Just like the giant gates that lead to nowhere, it is a museum displaying relics of the past. And I know the Sarmaya family were ecstatic about  being taken back there vicariously via the dialogues that promised to feast on chironji, kesar malai pan, and barfi and the soundtrack that syncretized the temple bells and the azan. Through this film, we’ve taken a tour back into Ganga-Jamni tehzeeb with the bonus of a homestay experience. We live with an integrated community of characters who are religion-blind. In fact we notice Bachchan’s Groucho Marxesque prosthetic nose more than his beard and cap – these Muslim markers feel natural and familiar. Like Javed Akhtar told us once before, you won’t hear ‘asla walaikum’ in Lucknow as much as ‘adaab’. Like the community, the Haveli has survived, even under great stress, negligence and powers of corruption.

The Haveli was going to be annexed much like the kingdom of Awadh in Satyajit Ray’s Shatranj ke Khilaadi. In the film, the King of Awadh, Wajid Ali Shah’s royal titles are dissolved as British General Outram arranges the royal exit on the pretext of incompetence and negligence. The Nawabs’ noses are buried too deep in petty differences and their game of chess to care about the fate of Awadh. By and by there’s nothing to do but sit and watch, just as Baankey and Mirza watch Fatima Begum’s white car zoom past, having been rendered destitute by a fickle turn of destiny. One is spurred to think about who is responsible for such misfortune? Did Mirza tempt fate by his insatiable need to own the Haveli? Or was he blindsided, like the Nawabs, who failed to recognise their real enemies, who even paid for the raids by the British Army on other kingdoms, and finally paid for their own demise? This film reads like a tragedy in the skin of a comedy where the hero, unable to adapt or modify his tragic flaw, “dies” as a result of it.

In comparison, the women characters are better survivors. Baankey’s sisters are better educated and Guddo is constantly doing what she can to secure a job. Come what may, Begum refuses to die. Each of them are interesting and so well-etched in the criminally small screen time they get. But one can perhaps forgive this because – as reductive as this sounds – the men face the music and the women win. So delicious are the scenes of their comeuppance, like when Fauzia dumps Baankey for her shiny new husband, in his shiny new car. But sometimes it’s equally painful to watch like the post climax, when we realise that Mirza’s throne that he sold for Rs. 250 is finally going for Rs. 1,35,000 in an antiques auction and the “priceless” Haveli is sold for Rs.1.