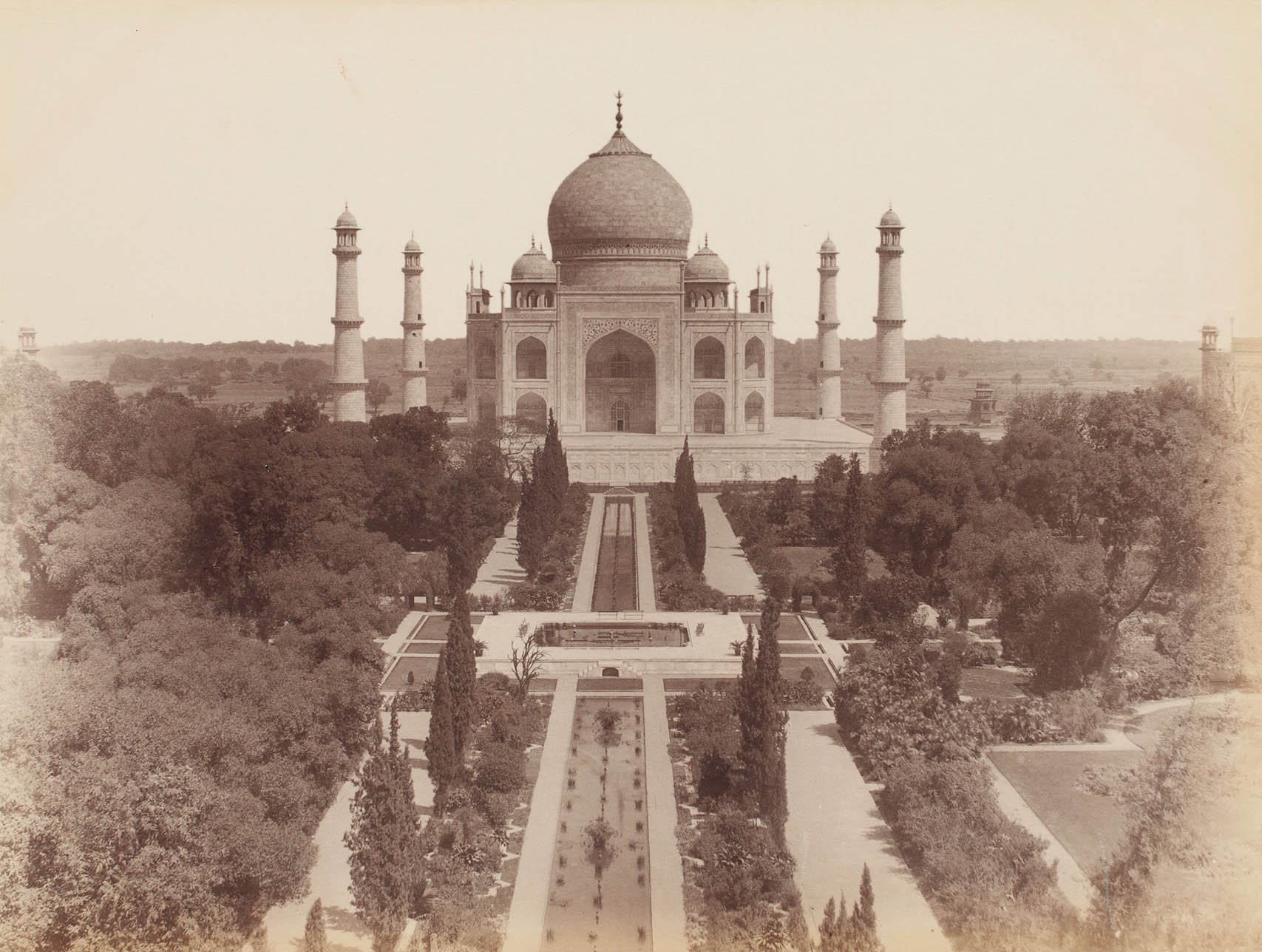 The char-bagh in front of the Taj Mahal, Agra © Sarmaya Arts Foundation

In the Holy Quran, paradise is described as a garden of exquisite perfection; the word ‘paradise’ itself comes from the ancient Persian ‘pari daida’, meaning an enclosed or walled garden. Art and architecture come together in the creation of Islamic gardens. Though they follow certain set rules, there are regional variations on the theme including Arab, Turkish, Persian and, on our Subcontinent, Mughal gardens.

Starting with Babur, emperors went to great lengths to bring the Quranic ideal of paradisial gardens to Hindustan. Mughal gardens were designed to survive in the arid plains of North India, and they served various symbolic, religious and political functions depending on who commissioned them. They survived their patrons too; well beyond the Mughal era, ceremonial gardens in India were influenced by this blueprint. The British too followed a similarly symmetrical layout and water canal system. Designed by Sir Edward Lutyens in 1917, the stately Mughal Garden that frames Delhi’s Rashtrapati Bhavan is evidence of the continuing cultural influence of this 16th-century trend. 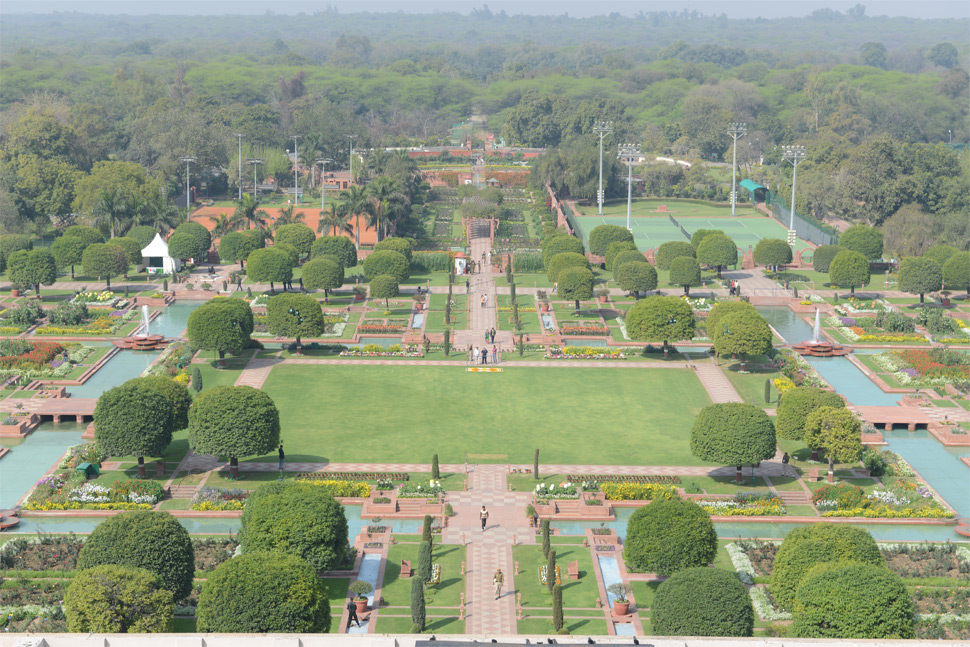 Mughal emperors considered gardens as one of the most important architectural components of their state—so what made a garden adequately ‘Mughal’? Here are 10 clues.

The first Mughal garden was a cure for home-sickness 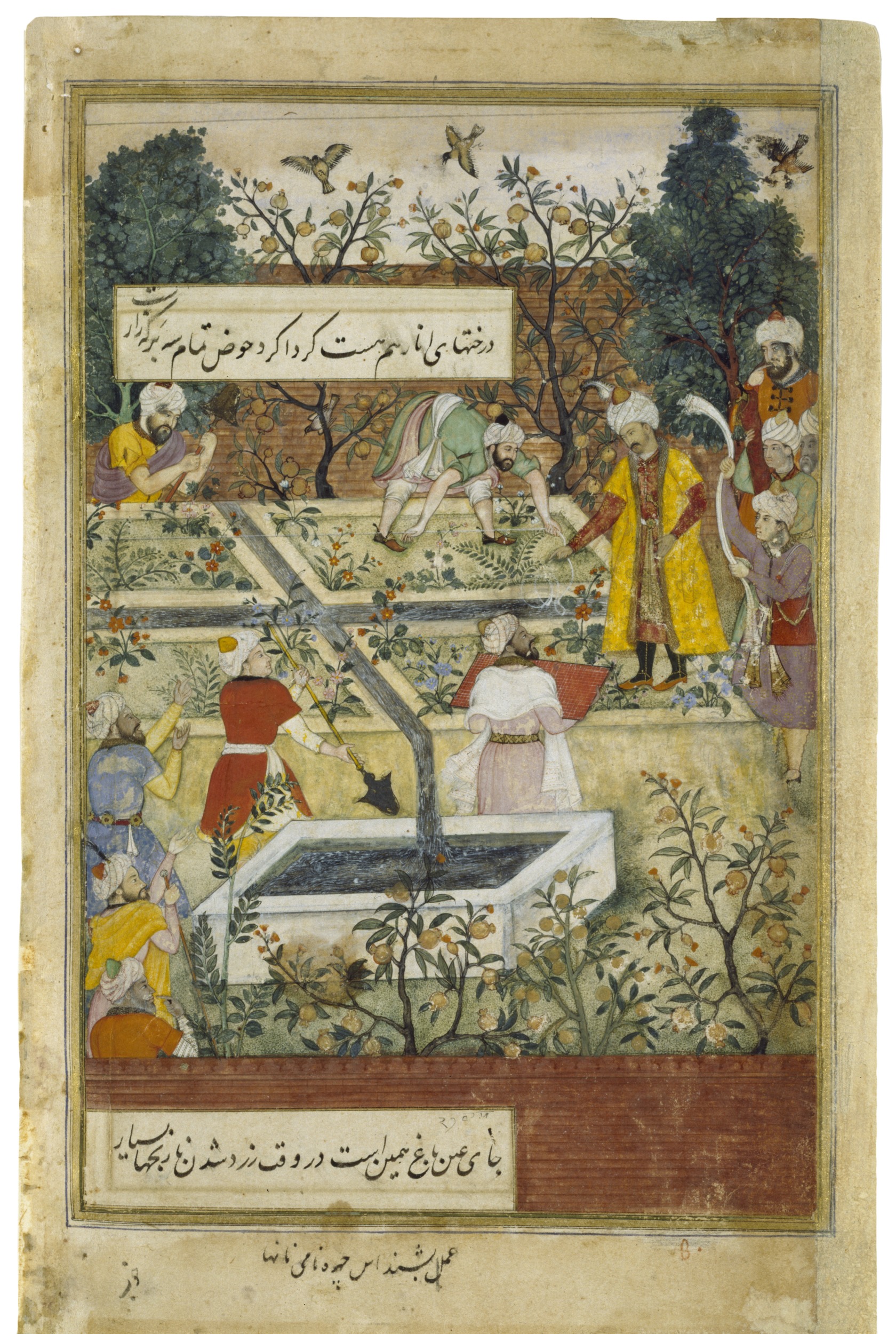 ‘Babur supervising the laying out of the Garden of Fidelity’, image source: V&A Museum/Public Domain

From a very young age, it was essential for Babur to conquer and secure his ancestral home, Samarkand. But ousted from his beloved country again and again, he grew remorseful and turned his gaze southward into the plains of Hindustan. In 1526, when he defeated Ibrahim Lodhi and conquered Delhi and Agra, Babur took stock of his new homeland and thought it could use improvement. Among the essentials he considered missing from the landscape were enclosed gardens and running water.

Babur set about trying to organise the ‘unclean and disorderly’ land of Hindustan by imposing the architecture of the heavenly gardens of his childhood. As art historian Ebba Koch notes, “The foremost characteristic of the Mughal Garden is its emphasis on architecture and orderly planning.” This is certainly true of the Persian-style chahar-bagh or char-bagh that Babur favoured.

Each garden follows the char-bagh design 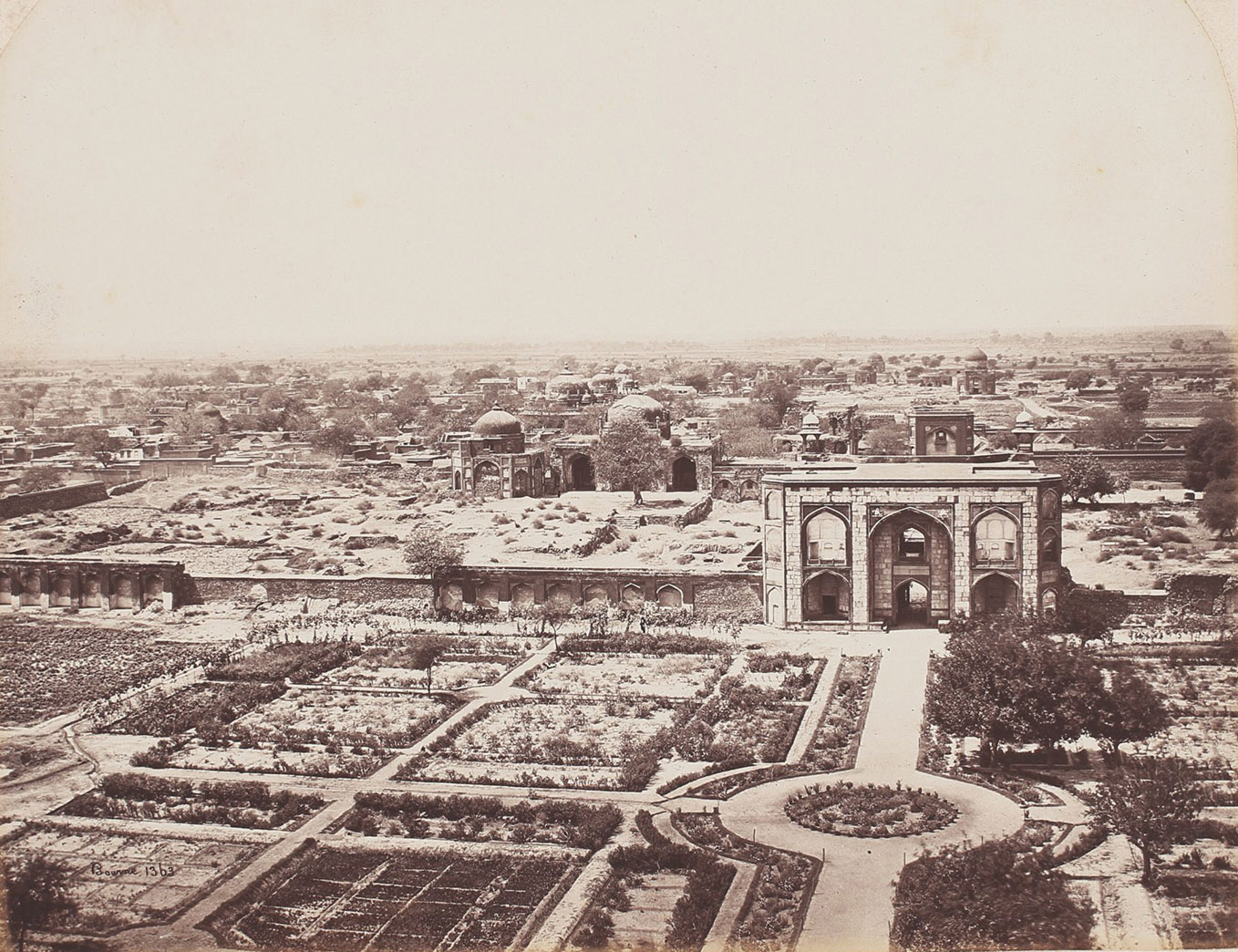 A char-bagh is a garden neatly divided into four sections by a cross-axial design. The Mughals believed it represented the heavenly abode, so it was a natural choice especially for funerary gardens. The Quran says- A similitude of the Garden which those who keep their duty (to Allah) are promised: Therein are rivers of water unpolluted, and rivers of milk whereof the flavour changeth not, and rivers of wine delicious to the drinkers, and rivers of clear- run honey; therein for them is every kind of fruit, with pardon from their Lord.[1] The char-bagh was a square or rectangular area divided symmetrically by water channels into four quadrants, representing the four rivers of Allah’s Garden. Here the righteous would be rewarded after death with flowing water and the cool shade of trees. These details possibly owe their origin to the aridity of the lands where Islam originated.

Akbar and Humayun’s tomb are one of the best examples of the char-bagh design. Humayun’s tomb was built by his Persian wife Bega Begum between 1569-1570. The tomb is placed at the centre of the char-bagh, signifying an ordered universe with the emperor at its heart. Each quarter is subdivided into eight plots, representing the eight sections of the Quran. The water channels symbolise the four rivers of heaven and the paved walkways are lined with cypress trees, which are an emblem of immortality.

Indian plains were irrigated with water from tanks, wells and baolis, which was carried by oxen or drawn in carts to the gardens. Babur used water reservoirs in several gardens, including the Lotus Garden in present-day Uttar Pradesh. Here, he built several lobed pools connected through channels, all cut out of rock. One pool had four channels which is how the garden is characterised as a char-bagh; except for this feature, the garden is antithetical to the typical geometrical order. 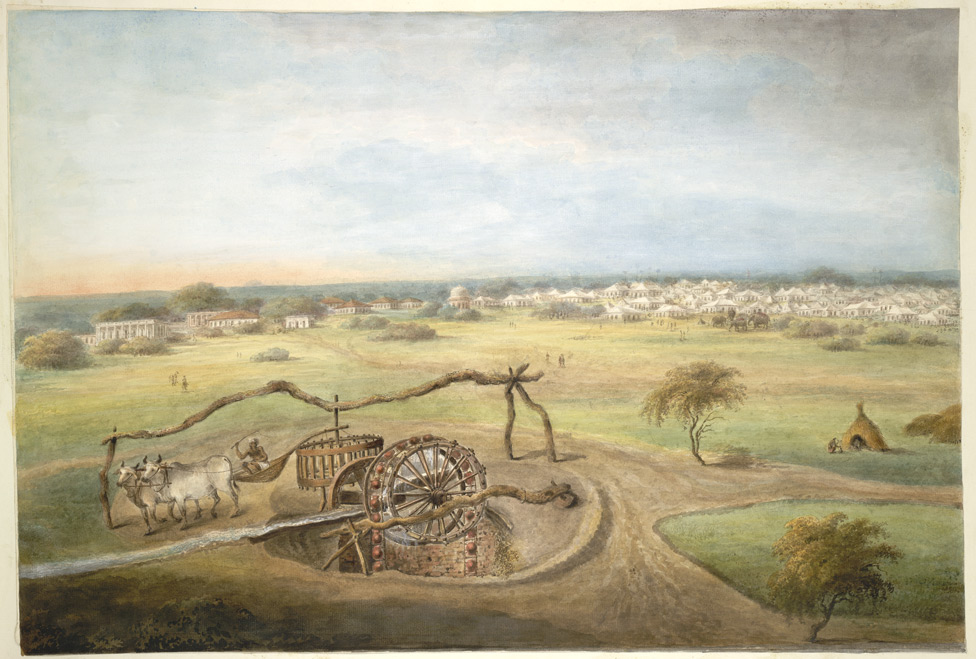 However, Babur found these methods of irrigation ‘laborious and filthy’, he wished his gardens to be irrigated and beautified with running water as described in the Holy Quran. In S Fatma’s Waterworks in Mughal Gardens he is quoted as saying, “One of the great defects of Hindustan being its lack of running water, it kept coming to my mind that water should be made to flow by the means of wheels erected wherever I settle…” Here the emperor is referring to the Persian wheel or rehant as they were locally known here. The Persians had accomplished the means to transport water from mountain springs to underground channels in the 8th century.

How did the Persian wheel work in India? Through a chain of pots attached to a mechanism called a pin-drum gearing, water was lifted at great heights and then dropped into the terrace gardens’ water pools. These pools were linked through canals, the overflow from which irrigated the garden plots. 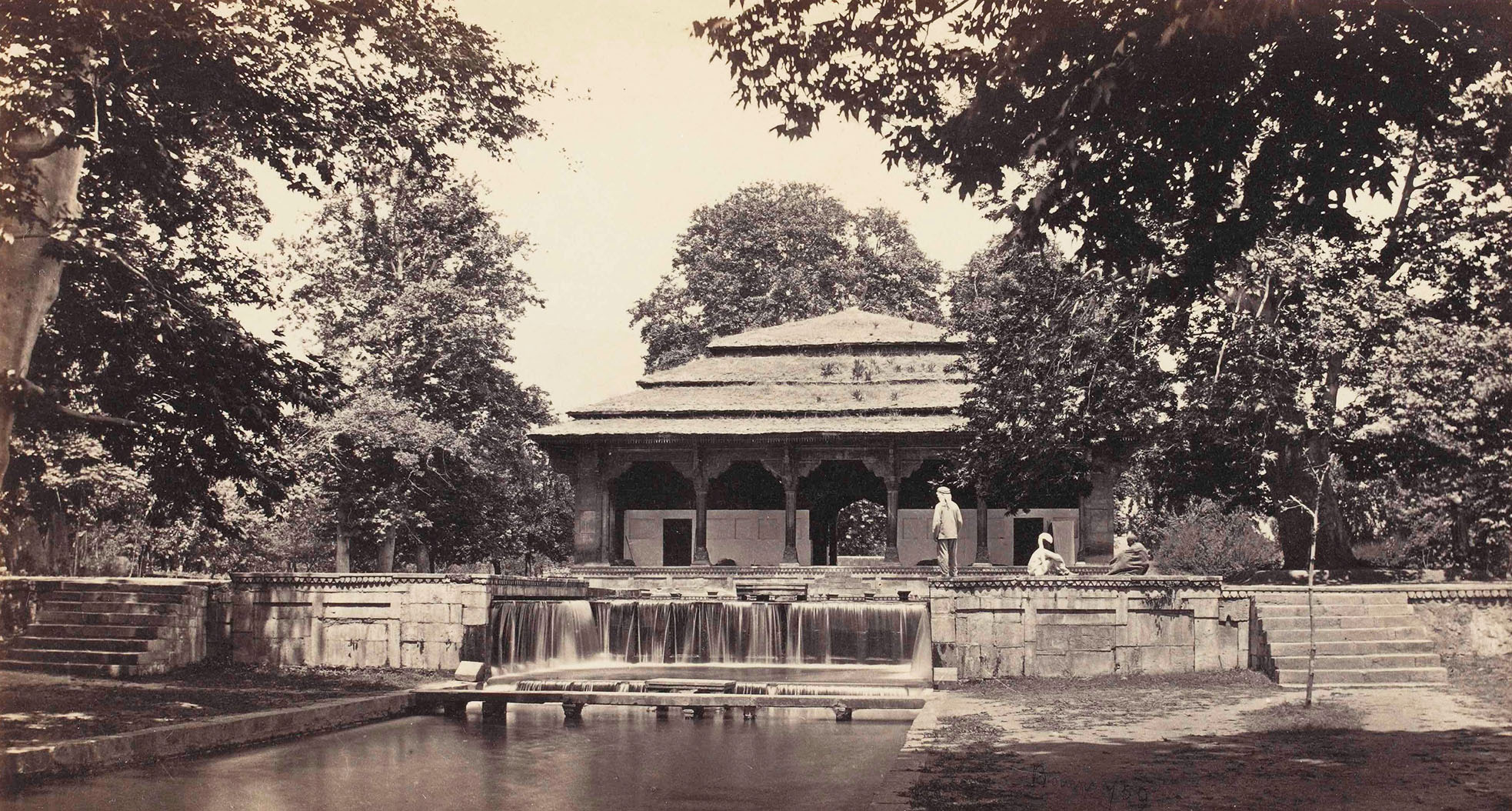 These words written by the great poet Amir Khusru are inscribed on the black pavilion of the Shalimar Bagh in Kashmir. It is here, in the mountains which were conquered in 1586, where Babur’s dream was realised under the reign of his great grandson Jehangir. Kashmir’s topography allowed water to flow from natural springs in the mountain to gardens.

In the Shalimar Bagh (built in 1619 CE), the source of water was a canal built from the river Haroon and the garden canals ran into the Dal Lake. This along with the levels or terraces built in the gardens create a beautiful cascading waterfall effect. Each terrace has its own four-part garden and the strong force of the water allowed for them to be lined with water chutes and fountains. This water-abundant grove was truer to the Persian ideal than any other Mughal garden.

Fountains were a kind of magic 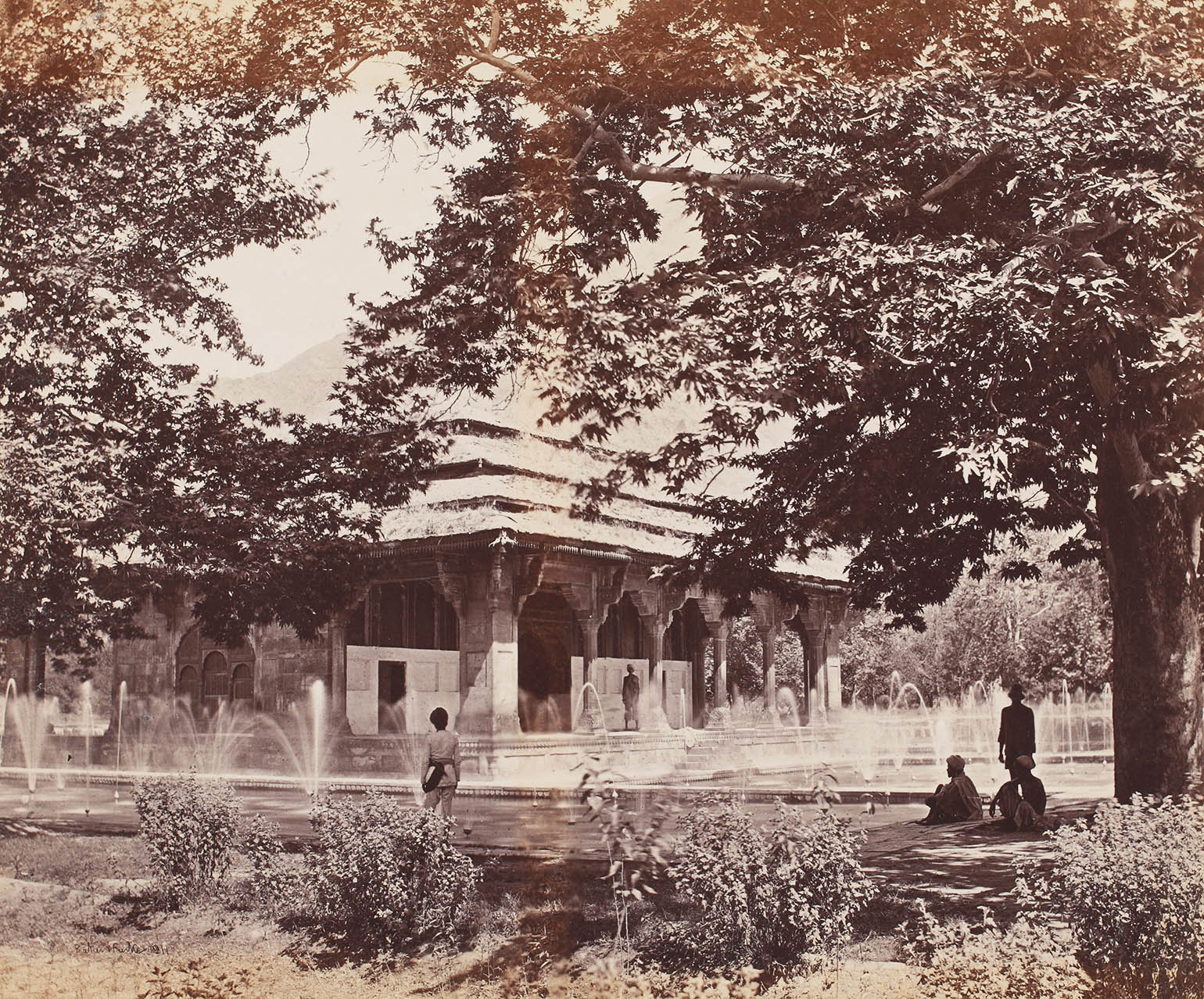 Fountains and springs are essential features of the paradisial garden. Some academics posit that in Islamic scripture, fountains symbolised the cycle of life: rising, merging and rising again. The mechanics of Mughal-era water-features were quite sophisticated for their time. They were fed by an independent arrangement of elevated reservoirs. It is the nature of water to be evenly levelled on a plain, so in an elevated reservoir, the level of water too would rise. This water would flow into a network of interconnected glazed terracotta pots that formed the base of the fountains. Inside the pots, water would rise further through capillary action and flow upwards from lotus-shaped marble spouts. Using mechanical principles such as these, Mughal architects created fantastical fountains of cool mist in the royal gardens. 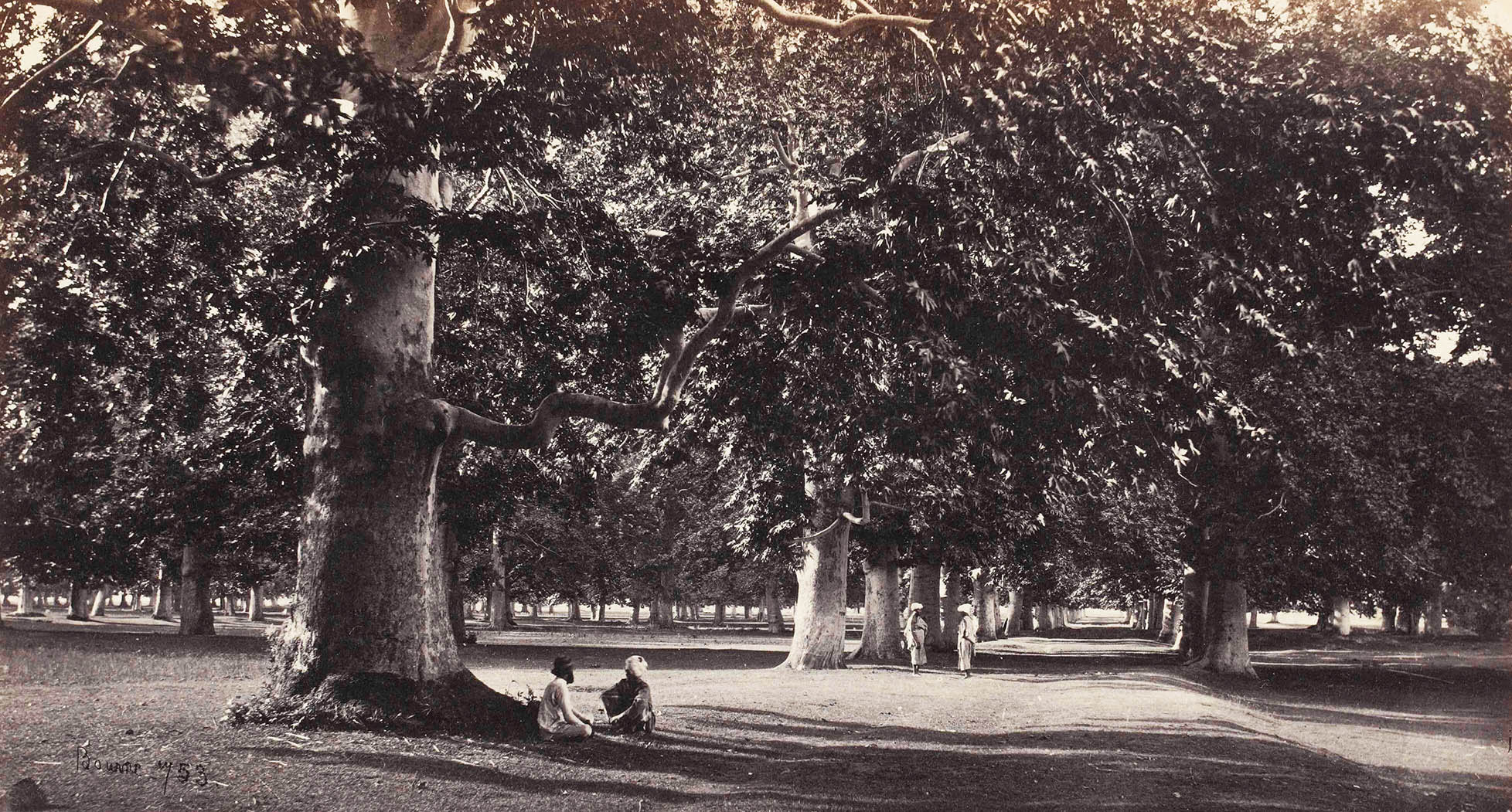 Each quadrant in a typical Mughal garden would have dedicated spaces to grow trees, flowers, herbs and vegetables. Deciduous and shady trees like oranges and mangoes lined the paved walkways. Flowers were carefully aligned next to the tank and pools so they would receive sufficient water. In their documents, Babur, Akbar, Jahangir and Shah Jahan list the various fruits and flowers grown in their gardens. The sale of fruits and vegetables paid for the maintenance of the garden.

From grafting to perfume-making, various horticulture experiments were performed in the Mughal gardens. Itr-i-Jahangiri, a perfume made by his mother-in-law Asmat Begum, used oils extracted from roses grown in the royal baghs. Thanks to its salubrious weather, Kashmir’s gardens produced the most varied fruits and flowers. An account by Shah Jahan numbers 4,500 roses in Shalimar Garden alone and 212 irises still in bud in Nur Afza. 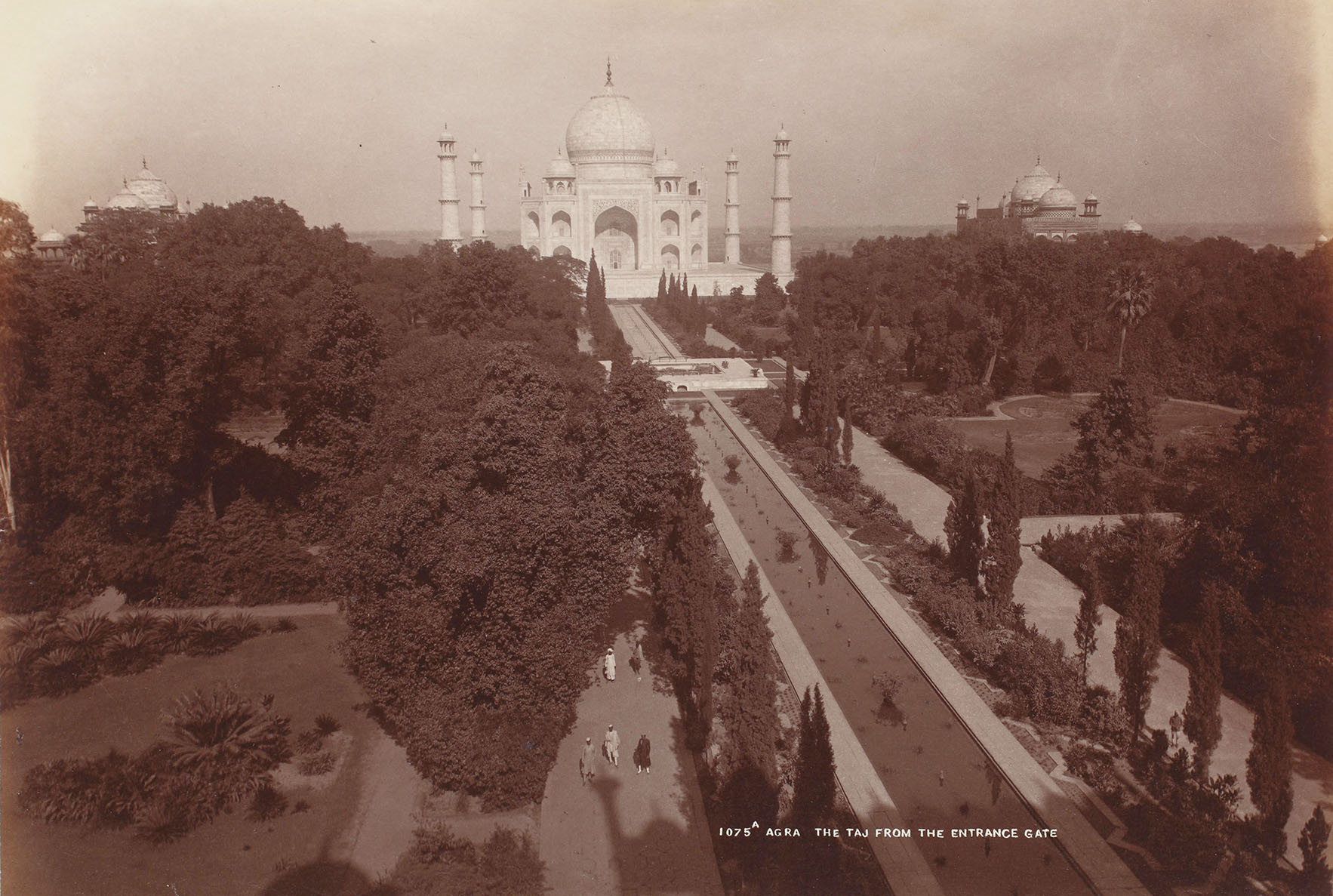 Inspired by gardens built by Nur Jahan and Mumtaz Mahal, Shah Jahan developed a new kind of char-bagh designed to sit on a riverfront. The main structure, be it a royal residence or tomb, was not placed in the centre of the garden but built on terraces lining the river’s bank. Flanked by fragrant gardens and flowing water, riverfront residences were well-suited to withstand intense summers in Agra, Delhi and Lahore. The best example of the waterfront garden style is the Taj Mahal and the residential gardens of the Agra Fort. Under Shah Jahan, Mughal gardens reached the peak of symmetrical beauty and popularity. Instead of designing a garden around a building, structures began to be built to fit into the ideal garden.

Gardens were a political statement 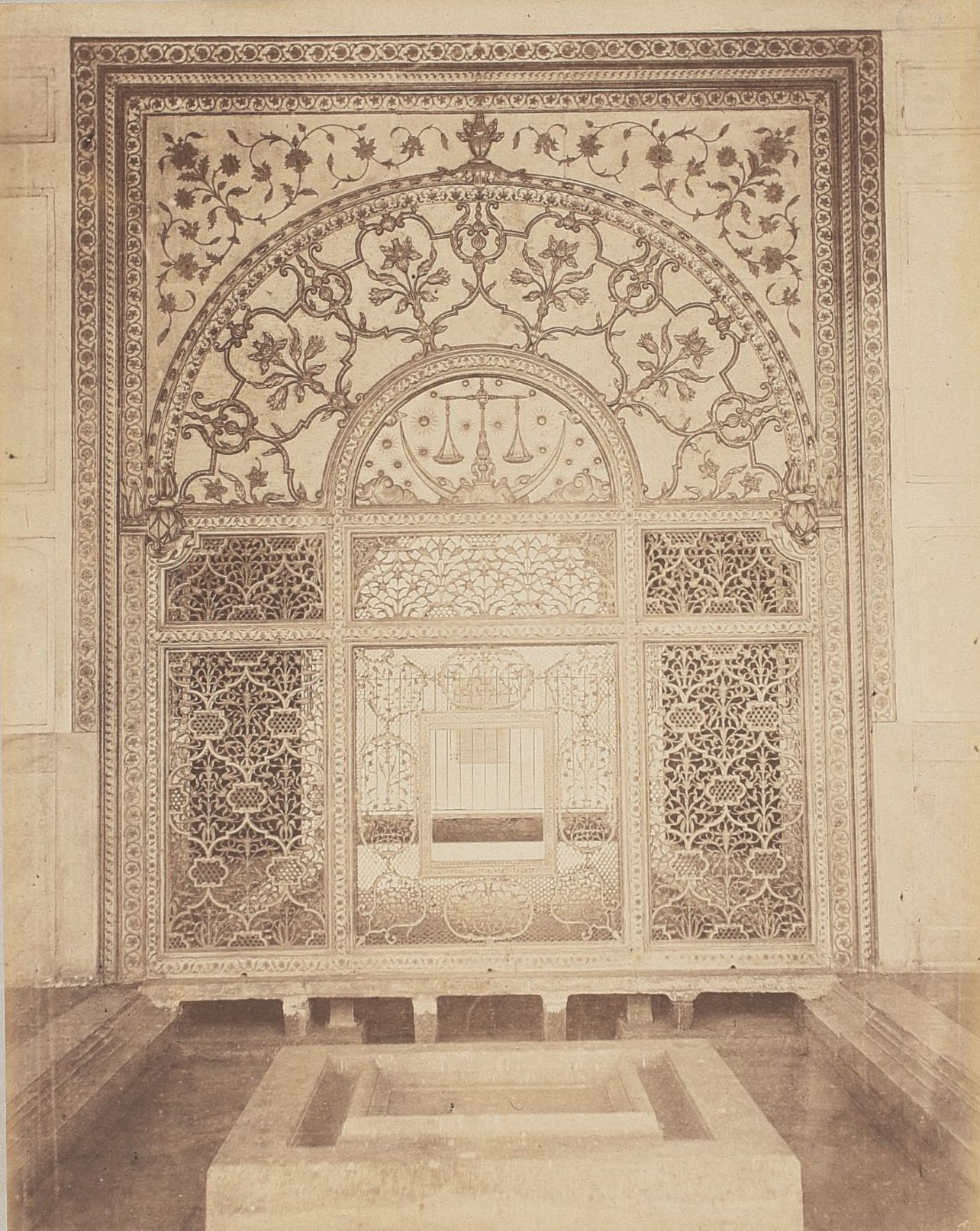 In the 16th century, Akbar’s court writer Abul Faz’l wrote, “As gardener adorn gardens with trees and move them from one place to another and reject many and irrigate others…chip of rotten branches and remove trees that are too large….so do just and far-seeing kings light the lamp of wisdom by regulating and instructing their servants.”

Shah Jahan brought this metaphor to life by surrounding himself with gardens. Ebba Koch has pointed out that Shah Jahan brought the design vocabulary reserved for palatial columns into garden pavilions. The gardens entered the palace too, in the form of cypress-shaped baluster columns, botanicals carved in marble, sunken carved pools, and walls and ceilings bordered with motifs of flowers and fruits.

This wasn’t merely a design preference; Shah Jahan’s gardens served a political function. Ebba Koch again: Shah Jahan projects “a new garden paradise that would surpass all models. A terrestrial image of jannat under which rivers were running.” By surrounding himself with paradisial abundance, Shah Jahan sought to be seen as the ideal king whose governance has ushered in a golden age of unending spring.

The British imposed their own order in the garden

Avenue of trees leading up to the Taj Mahal, which were axed on the orders of Lord Curzon © Sarmaya Arts Foundation

Mughal gardens as we know them today are only Mughal in their basic structure—everything else about them is British, from the manicured hedges to the lawns to the sparse rows of trees and flowers. The axing of trees in Mughal gardens began with Lord Curzon. As Governor of India, he ordered the chopping of trees from the pathways leading to the Taj Mahal so the monument would be clearly visible from the outside. From there on, the trend travelled and soon Mughal gardens lost their stately procession of trees that provided fruit and shade for hundreds of years. 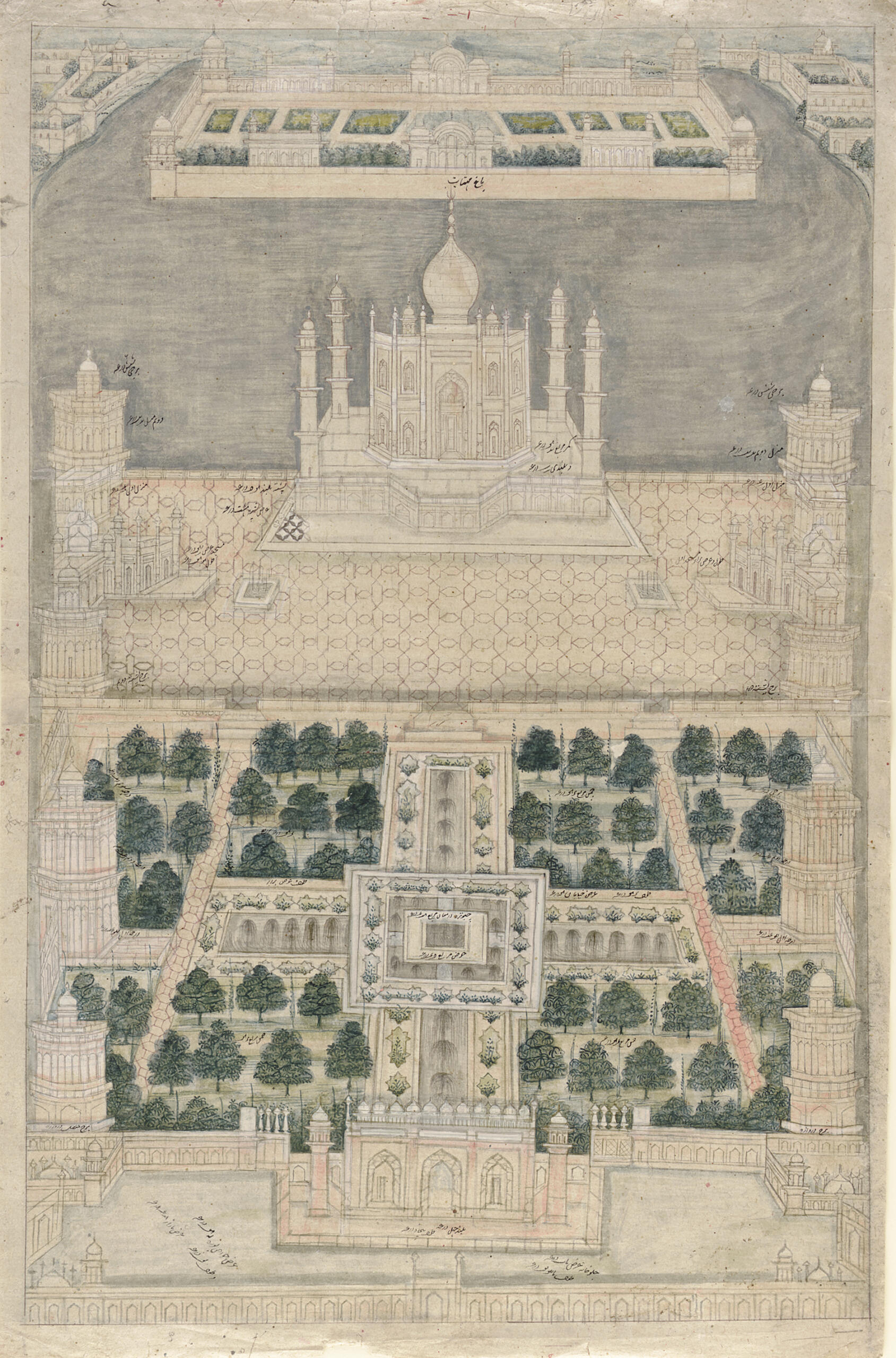 Miniature paintings served as both art and official court document during the Mughal era. Commissioned by the emperor, they served as embellished and flattering reports of kingly doings. Despite the exaggeration, these paintings give us a good sense of the design ambitions of the time. The char-bagh layout is in evidence in the paintings of several funerary and palatial gardens. We learn that garden pavilions, covered in carpets, were enjoyed by women of the zenana and the emperor. Most importantly, these paintings are the only remaining records of lost gardens like Mahtab Bagh, built on the Yamuna behind the Taj Mahal.