Sarmaya’s collection of rare books and its ever-growing library contains many travelogues describing journeys from Britain to India. In the early and mid-1600s Englishmen were undertaking these voyages driven by curiosity about a land reputed to be both rich in spices, minerals and precious stones, and welcoming to strangers. But these travellers had to proceed with caution. This job called for diplomacy, resourcefulness and a cast-iron stomach. Plus, you had to be able to sketch, conduct interviews and at times just stare open-mouthedly at the locals.

Here are some other incredible facts about travel in the 17th-century:

Six months and 7 days. That’s how long it took for Captain Thomas Best’s ships to get from England to the port of Daman in 1612. They set sail in February and it was September by the time they reached Surat. According to the Captain’s log, published in a compendium called ‘Travels in India in the Seventeenth Century’, a typical day at sea looked something like this (right): 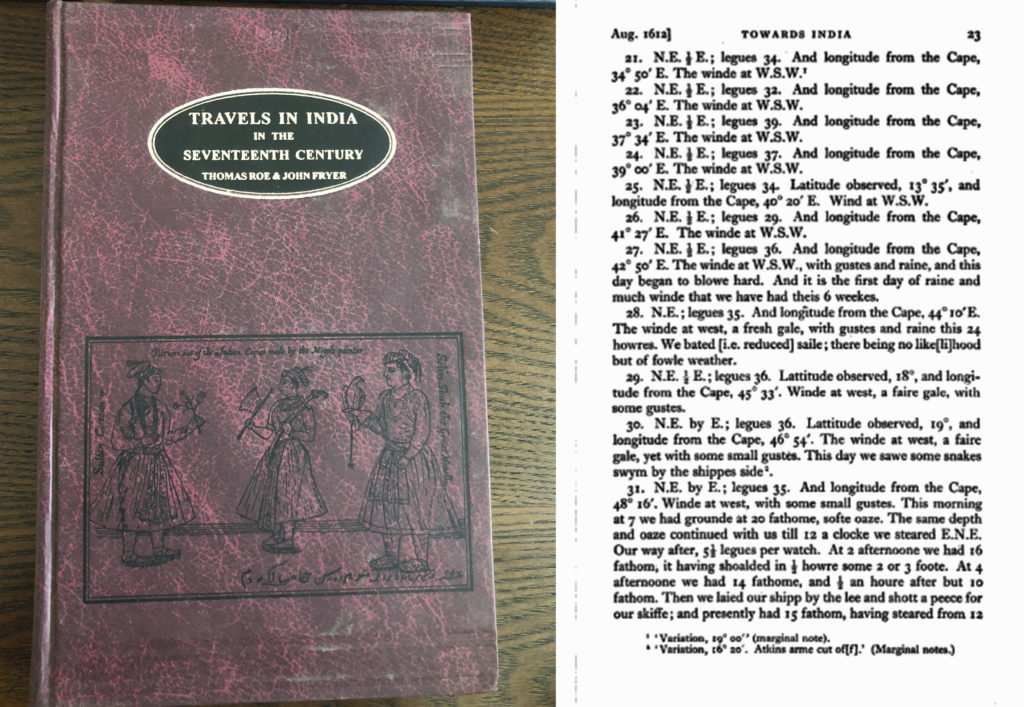 From the Sarmaya library

Your friends died along the way. A lot

At first glance, the Captain’s log seems like a dull document filled with maritime code and directions. But for the sensitive soul, it reads like a litany of loss: 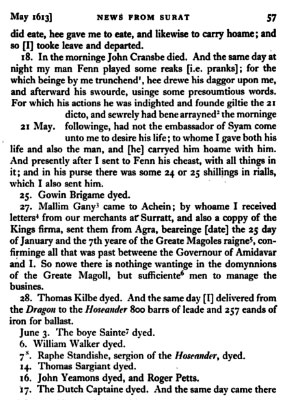 But if you survived, you’d probably get a book deal

Even though you wrote ‘S’ funny

Until the 19th-century, publishers often used what was called the long ‘S’ instead of the standard short one we’re all familiar with. It would usually be done in words with a double occurrence of the letter, in which case one would look like this: ƒ. This could get awkward sometimes: 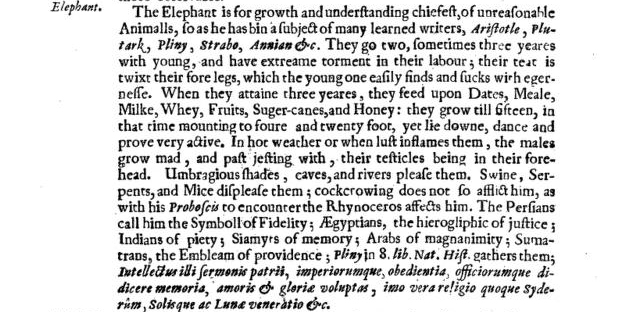 A passage on the Sumatran elephant from John Fryer’s book

If you saw something interesting, you had to draw it

The invention of photography was still two centuries away, so travellers had to make sketches and draw maps to illustrate points of interest. Sir Thomas Herbert’s book, ‘Some Years Travel in Africa and Asia the Great’ contained some beauties: 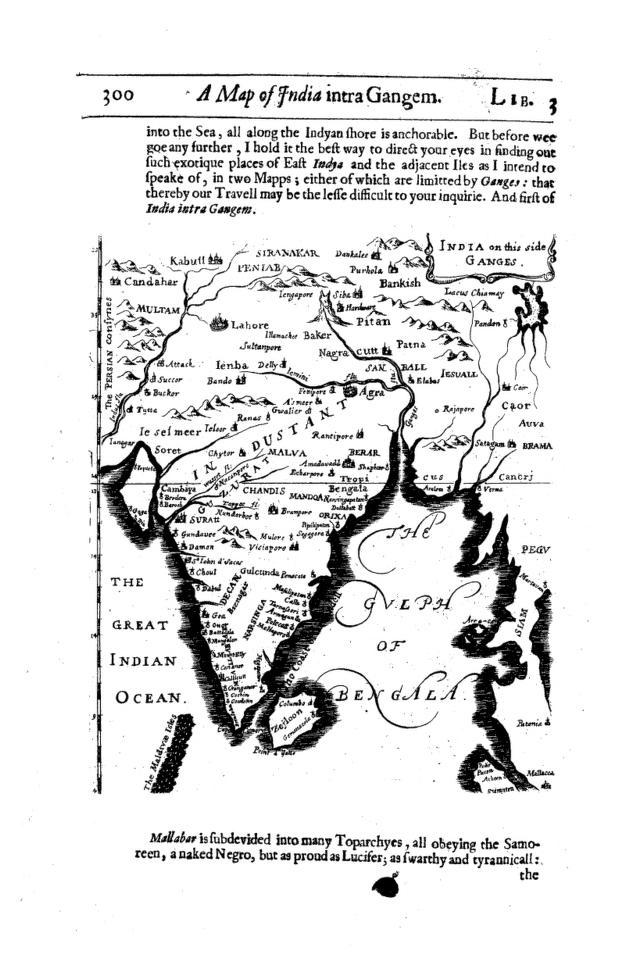 A map of India 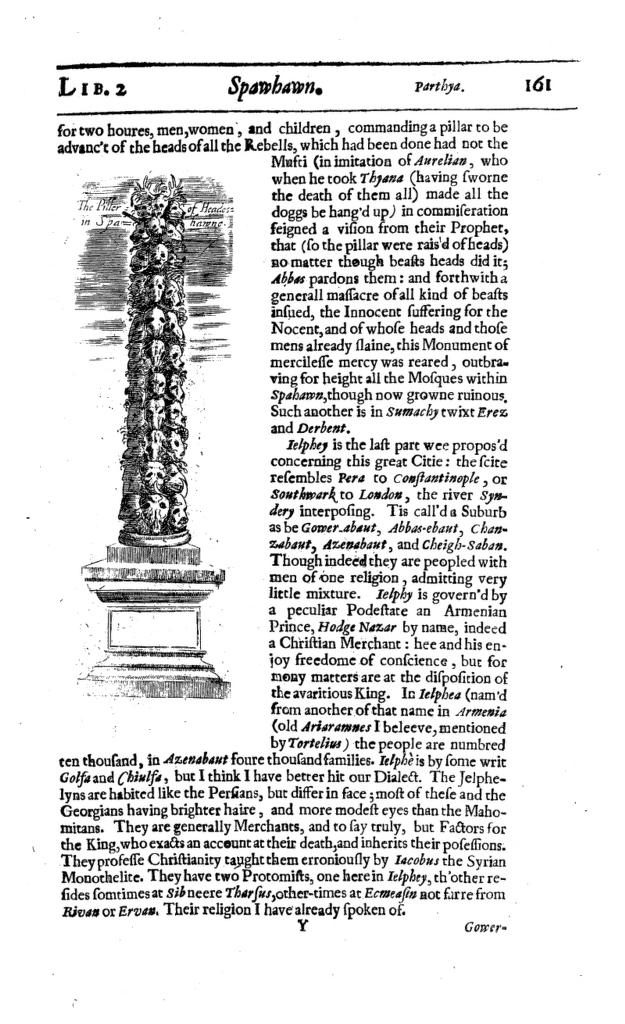 A pillar of beasts’ heads in Isfahan, apparently raised by Shah Abbas, the fearsome ruler of Persia

Then again, you could bump into a dodo!

Sir Thomas was also lucky enough to run into a dodo while he was in Mauritius—only a few years later, these creatures would go extinct. This is how he describes them (language edited for clarity): “…her body is round and extreme[ly] fat, her slow pace begets that corpulence; few of them weigh less than 50 pound; better to the eye than the stomach…Let’s take her picture: her visage darts forth melancholy, as sensible of Nature’s injury in framing so great and massive a body to be directed by such small and complementall (meaning ornamental) wings, as are unable to hoist her from the ground, serving only to prove her a bird…her head is variously dres[sed], the one half hooded with downy blackish feathers, the other perfectly naked, of a whitish hue, as if a transparent lawne (a lightweight sheer fabric) had covered it; her beak is very hooked and bends downwards…her eyes be round and small, and bright as diamonds; her clothing is of finest down…her legs thing, black and strong, her talons or pounces sharp, her stomach fiery hot, so as stones and iron are easily digested in it; in that and shape, not a little resembling the African ostrich.” 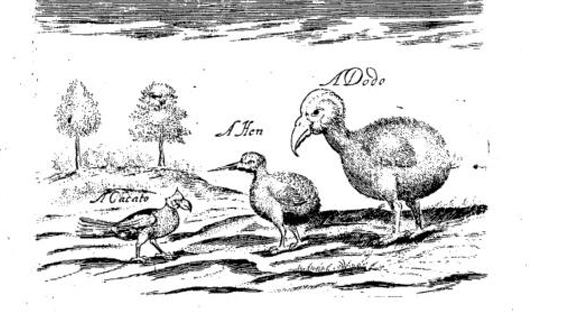 Drawing of a dodo by Sir Thomas Herbert

Game of Thrones had nothing on 17th-century current affairs

In his book, Sir Thomas spends a few pages describing the ascendancy of Shah Jahan to the throne of the Mughal empire. He refers to the prince by the name given by Emperor Akbar, Khurram, which is corrupted to Curroon by the Englishman. In his book, the author writes in a horror-stricken voice of the events following Mumtaz Mahal’s death. “Thus has Curroon (through a sea of blood) attained the highest post and dignity of the eastern world, surrounded by delights and guarded by a power (in his conceiving) irresistible; but these sins he makes nothing of, have apparently in these our times drawn down the heavy judgements of God Almighty; both in taking his beloved wife away the week of his inauguration, since when he has made his daughter (by that dead lady) his wife; incest of so high a nature that that year his whole empire was so wounded by God’s arrows of plague, pestilence and famine, this thousand years before never so terrible.” This story about Princess Jahanara was most likely fuelled by gossip and isn’t backed by historical evidence—but it made for a juicy tidbit to send home.

You got to report on the coronation of Shivaji

John Fryer happened to be in Bombay at an auspicious time. The Maratha empire was getting ready to crown its most charismatic and powerful leader. Fryer makes copious notes in his book about the grandeur of the celebrations to which his contemporary, the British envoy Sir Henry Oxenden was invited. 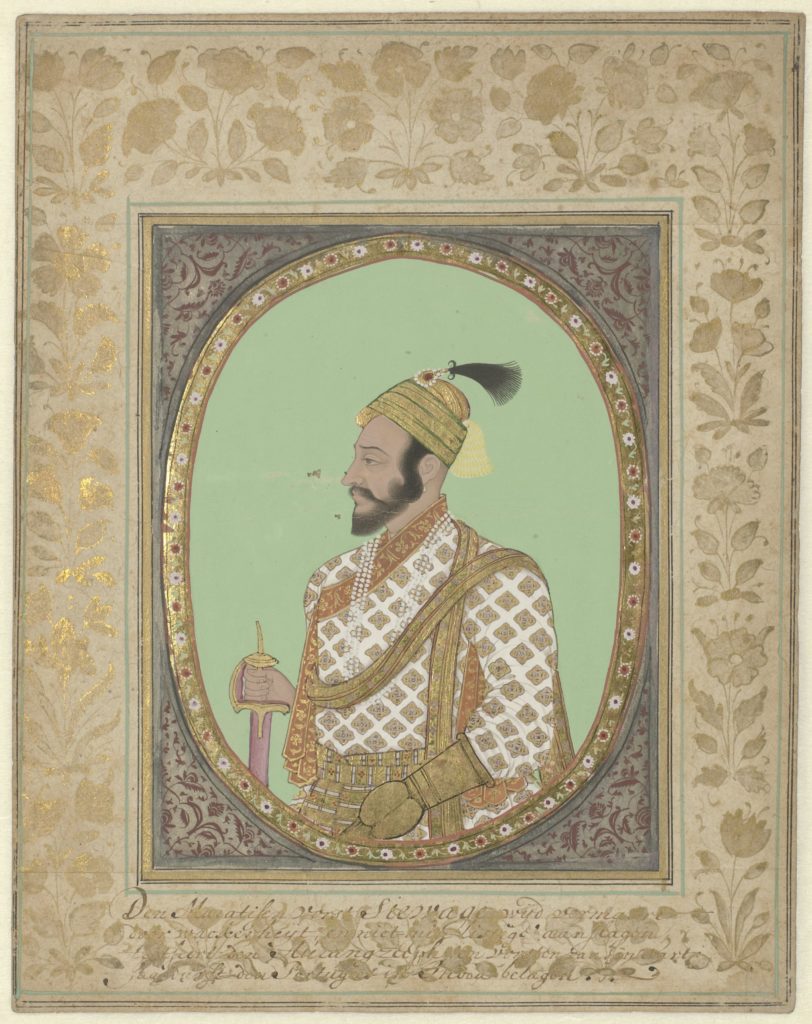 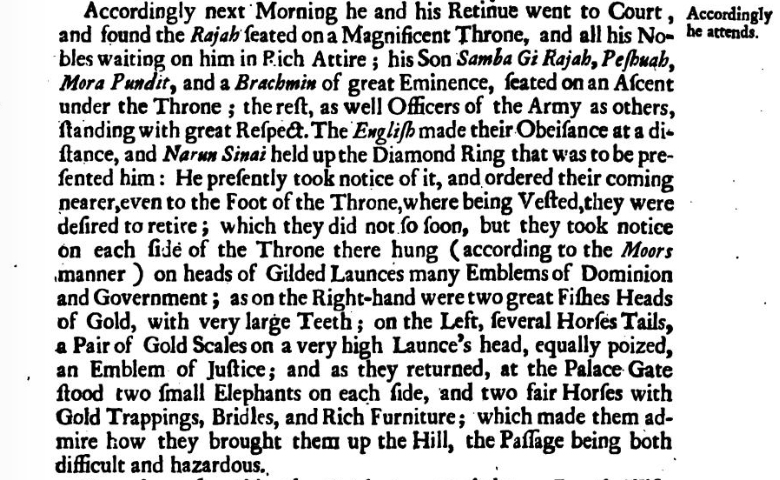 From Fryer’s book, a description of the British envoy presenting a diamond ring at Shivaji’s court

But you also watched people going to the toilet, for some reason

Perhaps because he was a physician, Fryer had an above average amount of curiosity about the more, shall we say, physical side of life. His book is replete with vivid descriptions of various maladies and more than once, he comments on locals relieving themselves. Here’s one of the less vivid passages on the subject, recorded in India:

According to Fryer, once upon a time Indian men peed sitting down

By the time the British empire started to take an interest in South Asia, they had some catching up to do. The Portuguese and Dutch were already established along the coasts, the Mughals were growing mightier in the north and the kingdoms of native leaders were ably administered by various titans. Books like the ones mentioned here were read and even financed by English merchants who were eager to learn all they could not just about trade possibilities, but also about the customs, politics and people of the land. In the 17th-century, a traveller wasn’t just a free agent chasing adventure. They were representatives of their countries and they were here to do a job.