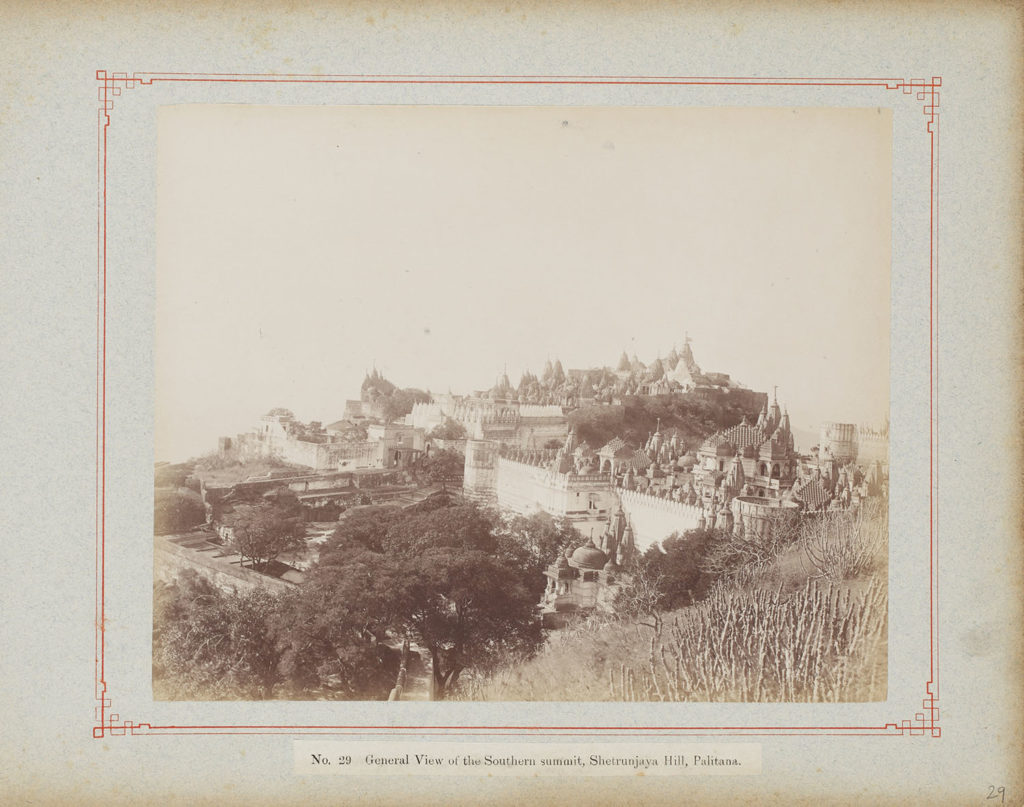 Imagine a hill along whose slopes lies a profusion of over 800 smaller peaks made from white marble, intricately carved. Despite the crowds that throng the hill, a studied silence reigns over its meandering pathways. At dusk, every single man, woman and child makes their way off the hill to let the divinity within sleep undisturbed. The Palitana temples in Bhavnagar, Gujarat cast a spell even through an old yellowing photograph. There’s something magical about the place, even if you’re not a believer.

Among Jains, of course, the significance of these temples cannot be overstated. Built on Mount Shatrunjaya in the town of Palitana, these 863 temples receive millions of visitors each year. Of the 24 Tirthankaras or spiritual leaders (though a more accurate translation would be spiritual saviours) in Jainism, 23 have visited this holy site. The first Tirthankara, Adinath or Adishwar is believed to have preached his first sermon here. 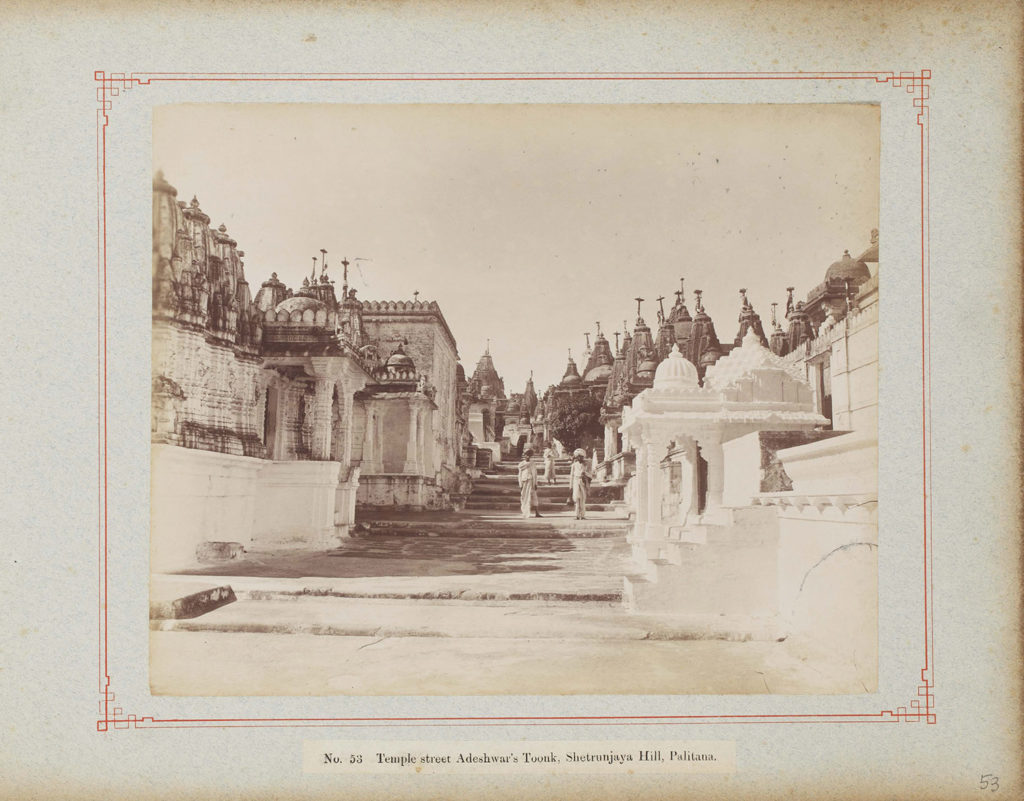 Historically, Palitana was the royal center of the region during the reign of the Mughals. The town was ruled by the Gohil family, who have ruled parts of Saurashtra starting in the 12th Century and right up till the princely state was merged into the Union of India in 1947. Despite its exalted status thanks to the presence of the exquisite Jain temples, though, Palitana is not your typical temple town. 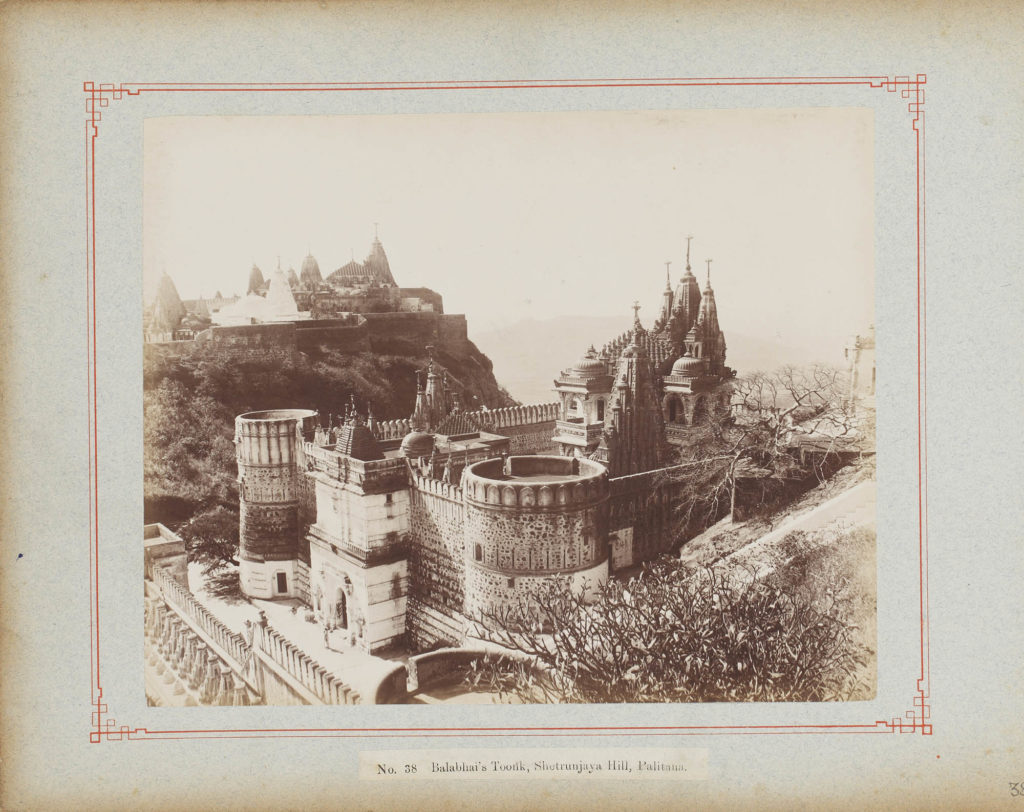 According to literature shared with Sarmaya by Brijeswari Gohil, founder of the Bhavnagar Heritage Preservation Society, “It is only, tourists, art and cultural enthusiasts who choose to splurge during their visit to Palitana. These tourists too, are not permitted to eat or drink anything including water once they reach up to the temple complex. No individual is permitted to reside in the Temple complex and for that reason by evening the entire group of staff including temple priests walk down the hills. This has been a rule since the time of inception in order to preserve the sanctity of the site.” 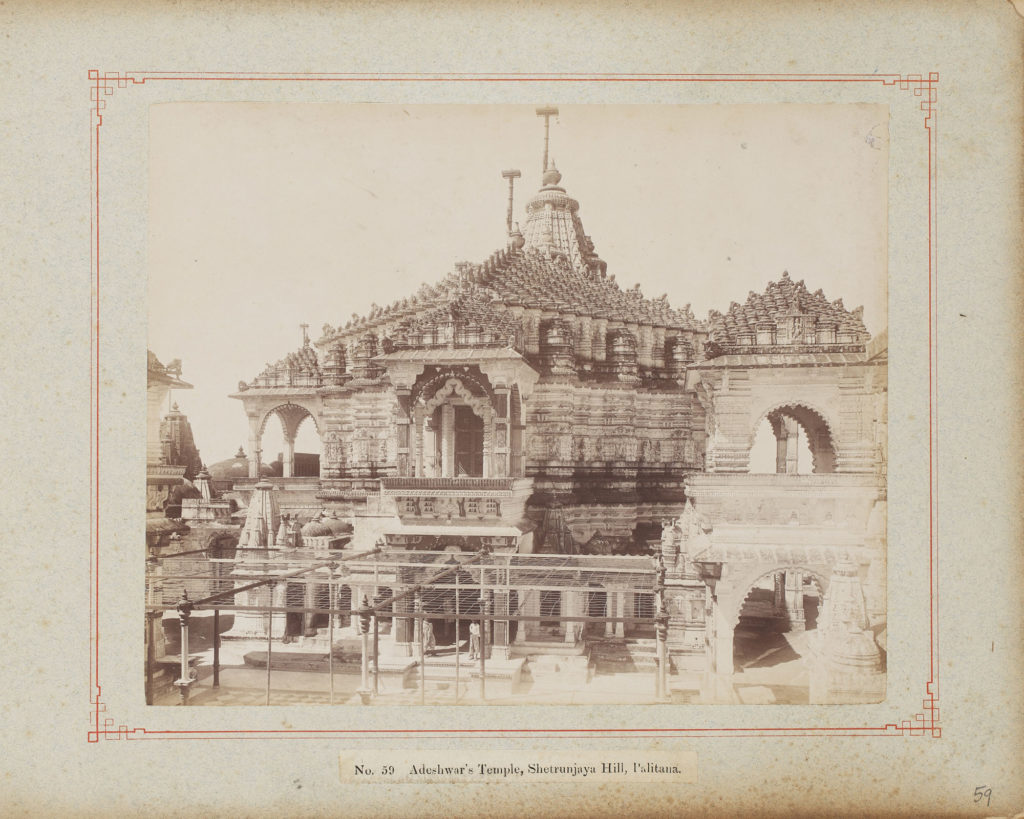 The Jain temples are dedicated to the religious icon Rushabdev, another name for the first of the Tirthankaras. The building of these temples was estimated to have taken over 900 years, and the construction took place over two phases. The primary phase was during the 11th -12th centuries, followed by a reconstruction and restoration in the 16th century, after invasions by Islamic rulers in the 14th -15th centuries. A significant proportion of the original architectural elements and sculptures were preserved in the renovation, making these temples a great example of how a cultural legacy may be preserved. 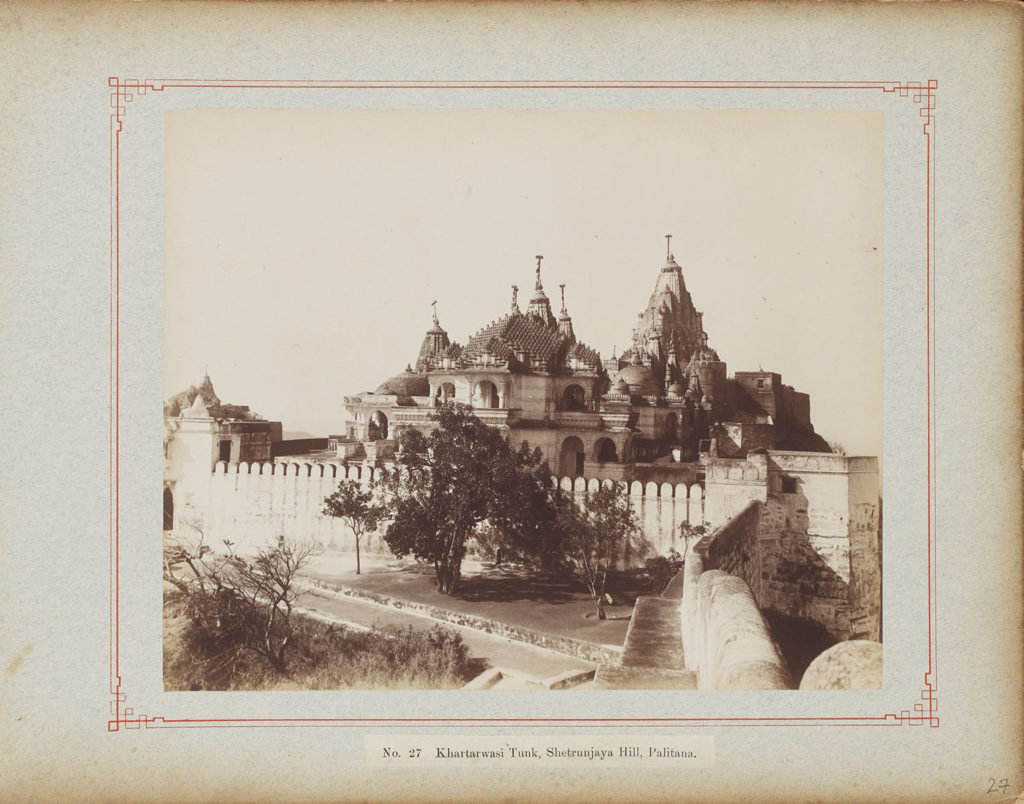 The temples are spread across nine main clusters or toonks, which extend right from the base to the peak of the Shatrunjaya Hills. Tourists and pilgrims shuffle uphill on a 3.5-kilometre path, climbing close to 3950 steps in the process of getting to the top-most temple on the hill-range. Each temple is fairly large and some even boast three-tiered towers, on which are perched four life-sized idols of Mahavira, the last Tirthankara, looking out over the surrounding greens. 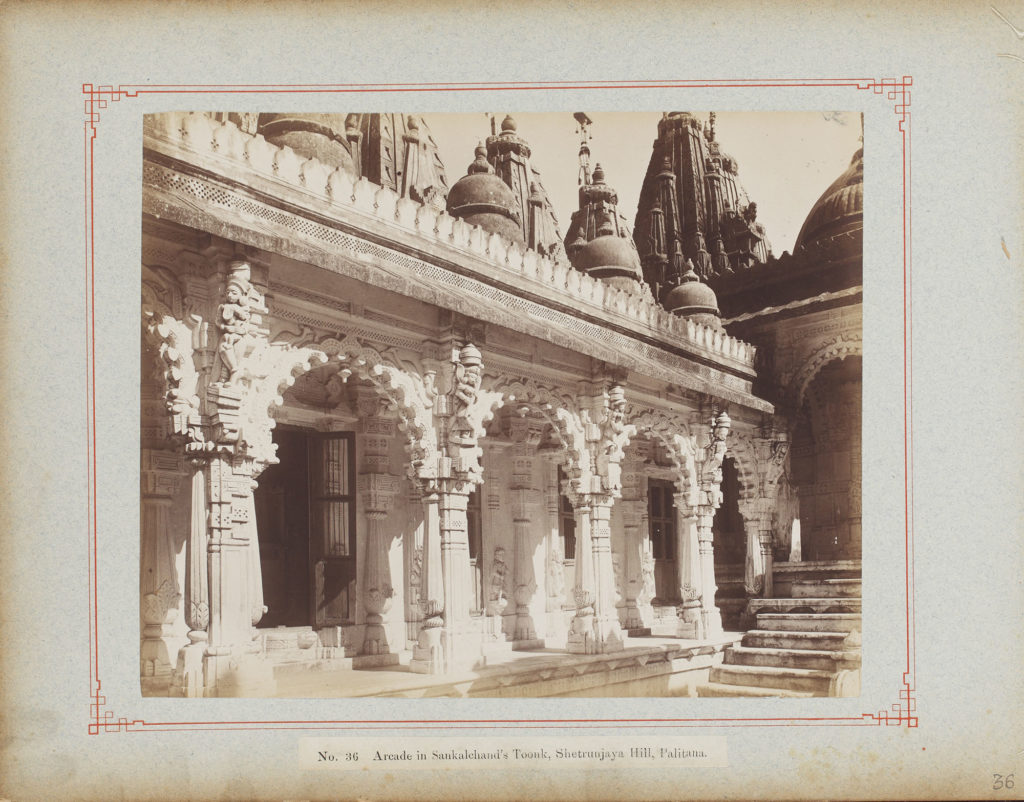 The clusters of Palitana temples are closely tied with the fortunes and scions of the Solanki or Chalukya dynasty. The oldest temples, dating from the 11th and 12th, centuries have inscriptions that document the donations made to the Shatrunjaya temples during the reign of emperor Siddharaja Jayasimha, who ruled from 1092-1142 and was known for his generous patronage of the Jain community. 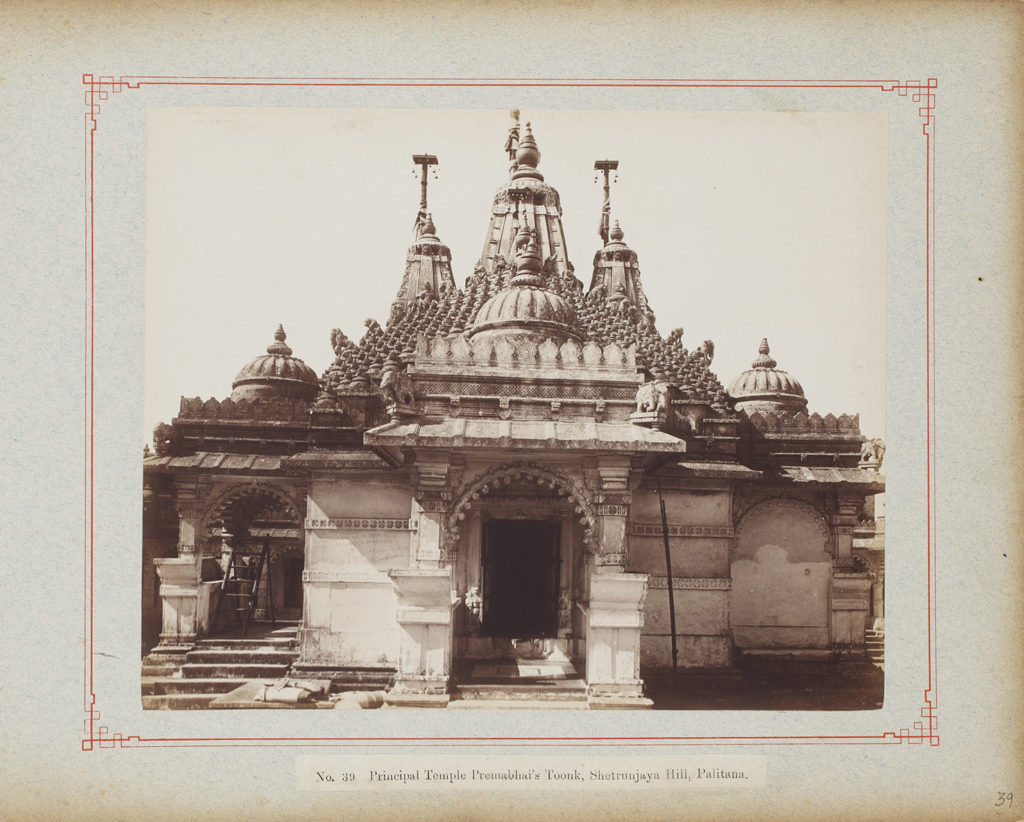 The temple architecture of the Shatrunjaya temples, typical of most Solanki architecture, is highly ornate with a lot of attention paid to elaborately rendering each distinctive feature and detail. Other representations include auspicious Hindu and Jain deities like Kali and Ganesha. Sculptural motifs and reliefs include hunting and war scenes, and references to conquests made by rulers before their conversion to Jainism also feature in the art here. Abounding among these are sculptures of dancers, musicians and the kirtimukha, or ‘face of glory’, a fanged lion-like beast that guards thresholds at the behest of Shiva. 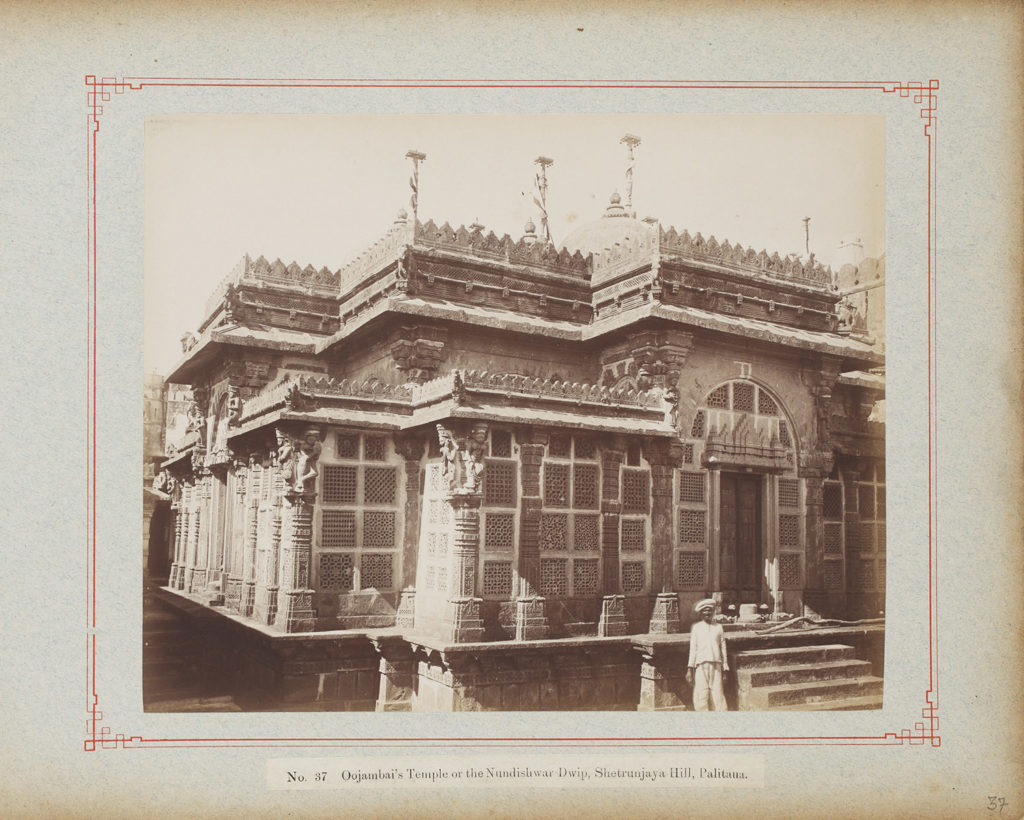 There is a prominent degree of stylistic uniformity within the architectural reliefs and sculptures at the various temple sites. This structural uniformity is observable in the more contemporary sites of the temple as well. The temples are all 108 feet high and measure around 108 feet in circumference too, making for neatly balanced proportions. In Jainism, Buddhism and Hinduism, the number 108 is considered to be sacred. One possible reason could be that 108 suggests temporal wholeness as it is the lowest common multiple of 12, the number of months in a year, and 27, the number of visible constellations forming a pattern in the night sky. This theme carries over in the Samavasarana temple constructed in 1985 at the base of Mount Shatrunjaya, which holds 108 idols of Parshvanath, the Tirthankara who preceded Mahavira.

Celebration on the hills 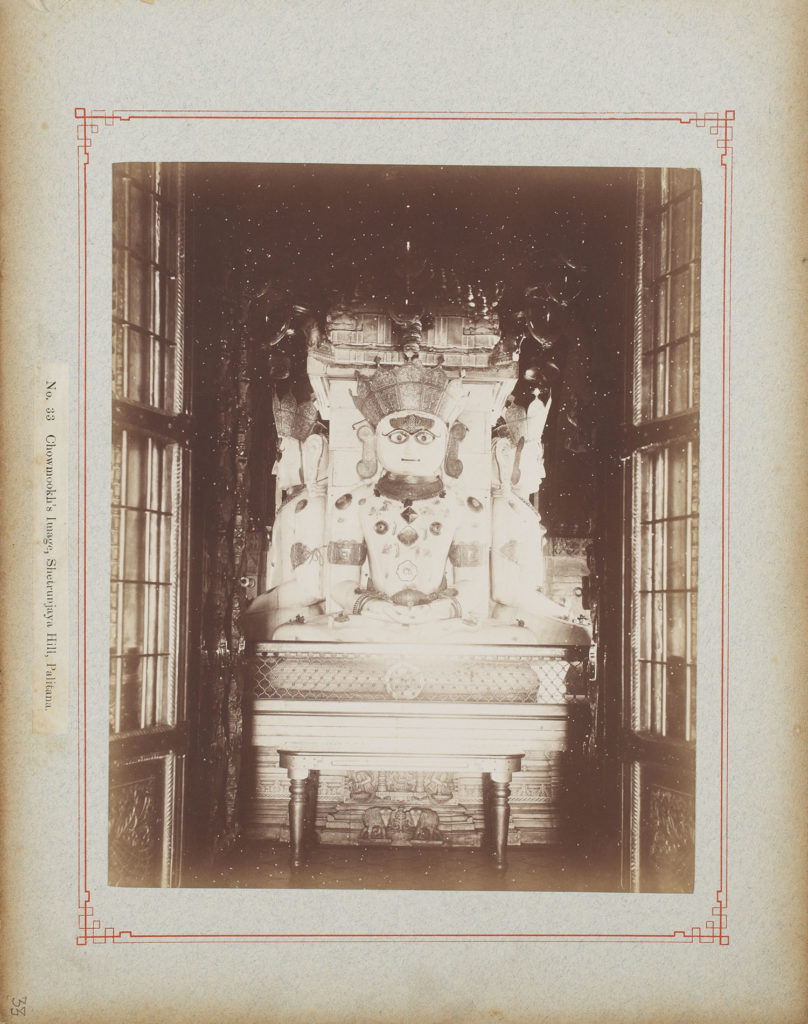 Mahavir Jayanti, also known as Mahavir Janma Kalyanak, is the most significant of Jain festivals and it celebrates the birth of the last Tirthankara of the kalyuga or the modern era. Mahavira is the 24th and last Tirthankara, born to King Siddhartha and Queen Trishala of the Ikshvaku dynasty in 599 BCE. Contemporary Jain philosophy focuses chiefly on the life and preaching or vani of Mahavira. 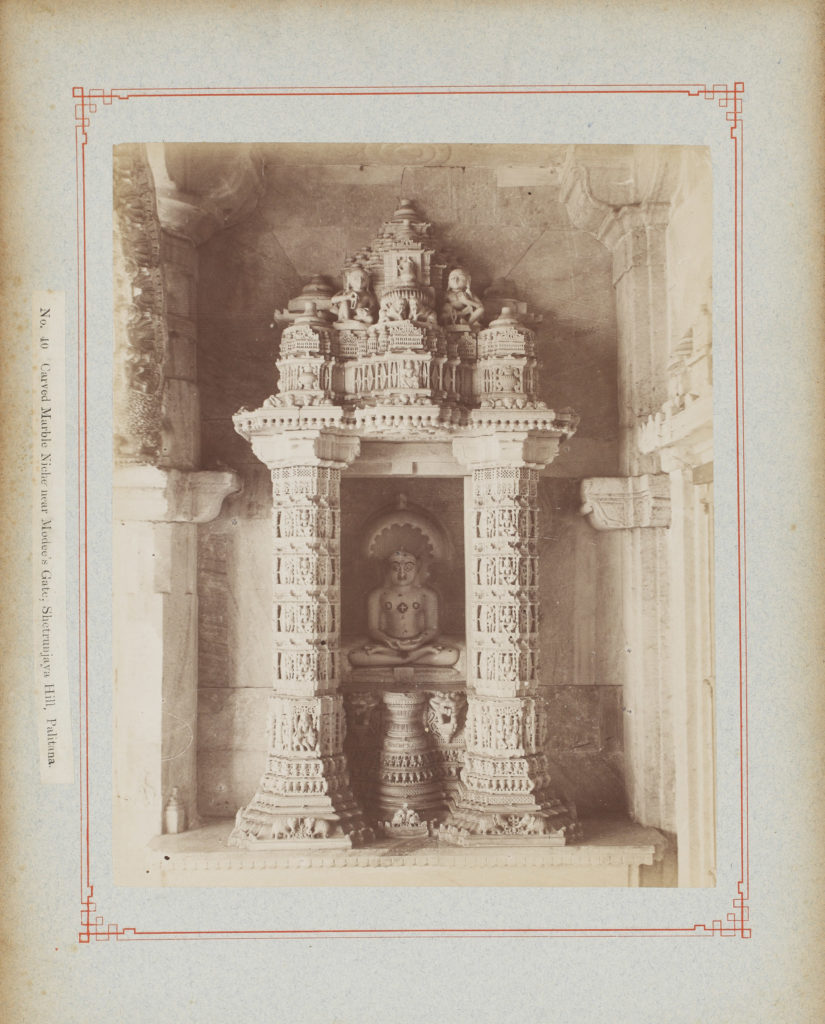 Several loyal devotees and pilgrims make their way to various toonks at Palitana every year around March-April to observe Mahavir Jayanti. It’s a solemn festival marked with meditation and sermons rather than pomp and revelry. Temples are decorated with flags and flowers, deities are bathed in a ritual abhishekam, and processions with the idols are led to offer believers a chance to pay their respects. Acts of charity, fasting and periods of quiet introspection are encouraged at this time. 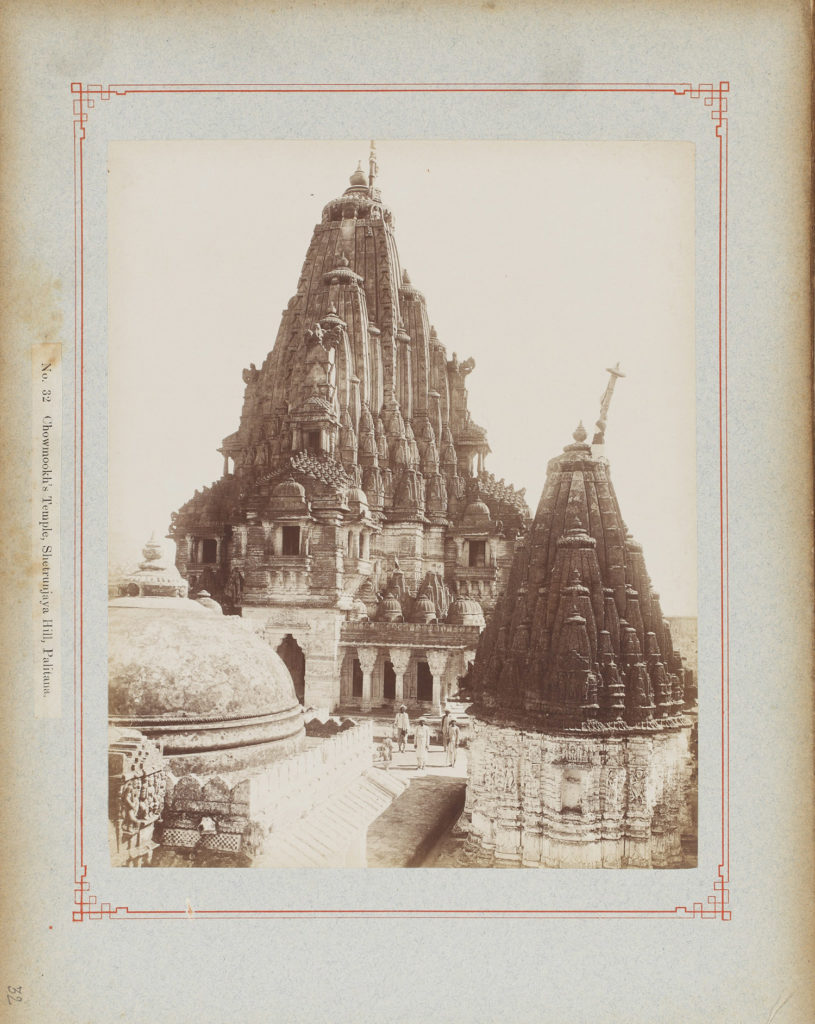 Interestingly, Palitana is special to those of other faiths too. There’s the shrine to Angar Pir located right next to the Adheshwara temple. This is the tomb of a Muslim saint who is said to have protected Palitana’s temples against Islamic invaders. It is now a spiritual destination for couples seeking to be blessed with children. 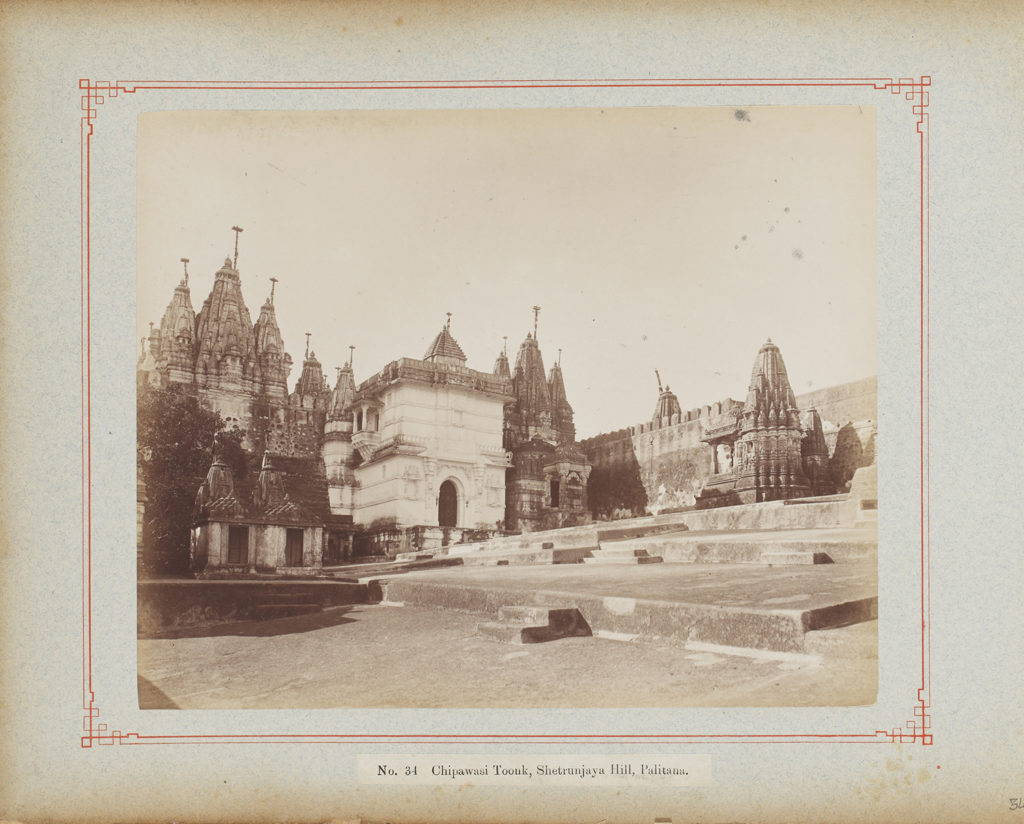 Each Jain temple on Shatrunjaya Hill has its own unique architectural features that blend the sensibilities of the monks who inspired their foundation as well that of the patrons who funded them. As a result, Palitana is a wonderland for both the spiritual seeker as well as the historical one—not to mention, the photographer chasing a good shot. 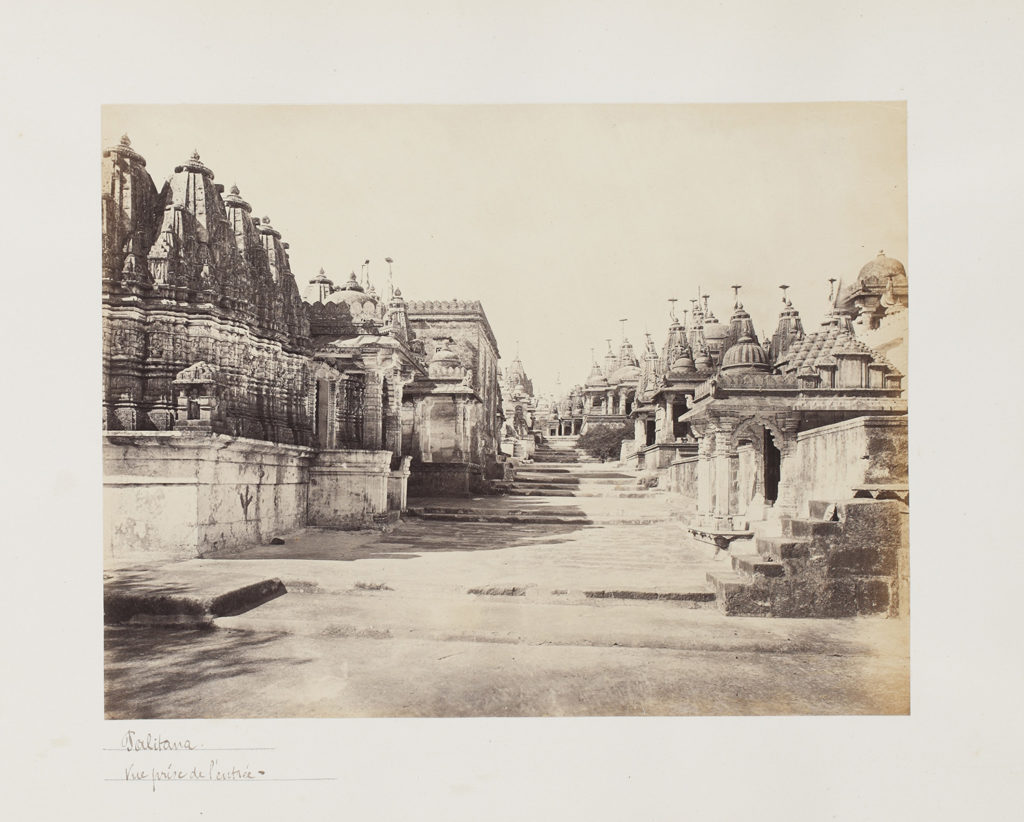 Edmund David Lyon was a British photographer who worked out of Ooty in Tamil Nadu between 1865 and 1869. From his base in the Nilgiris, Lyon undertook many commissions by the British government to document the monuments and landmarks of the Bombay and Madras presidencies. 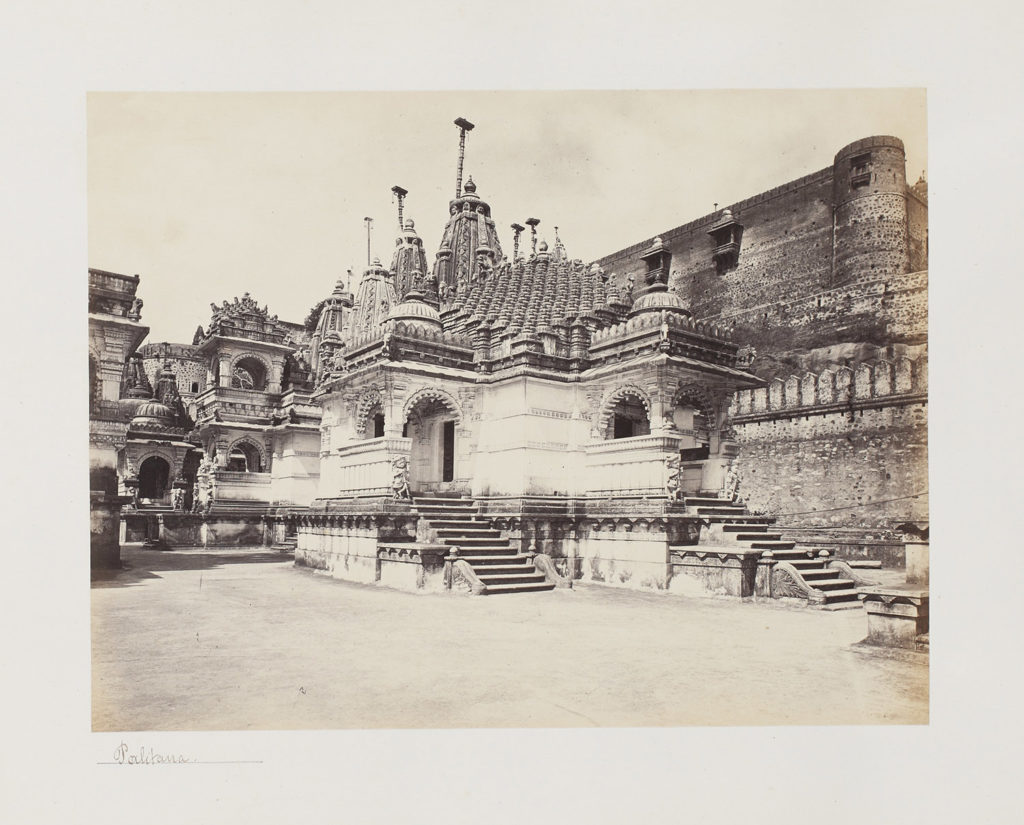 He was assisted on his shoots by his wife, Anne Grace Lyon. This set of beautiful photographs of Palitana were taken by the Lyons and are proof of their deftness with lighting architectural features, especially temple corridors. 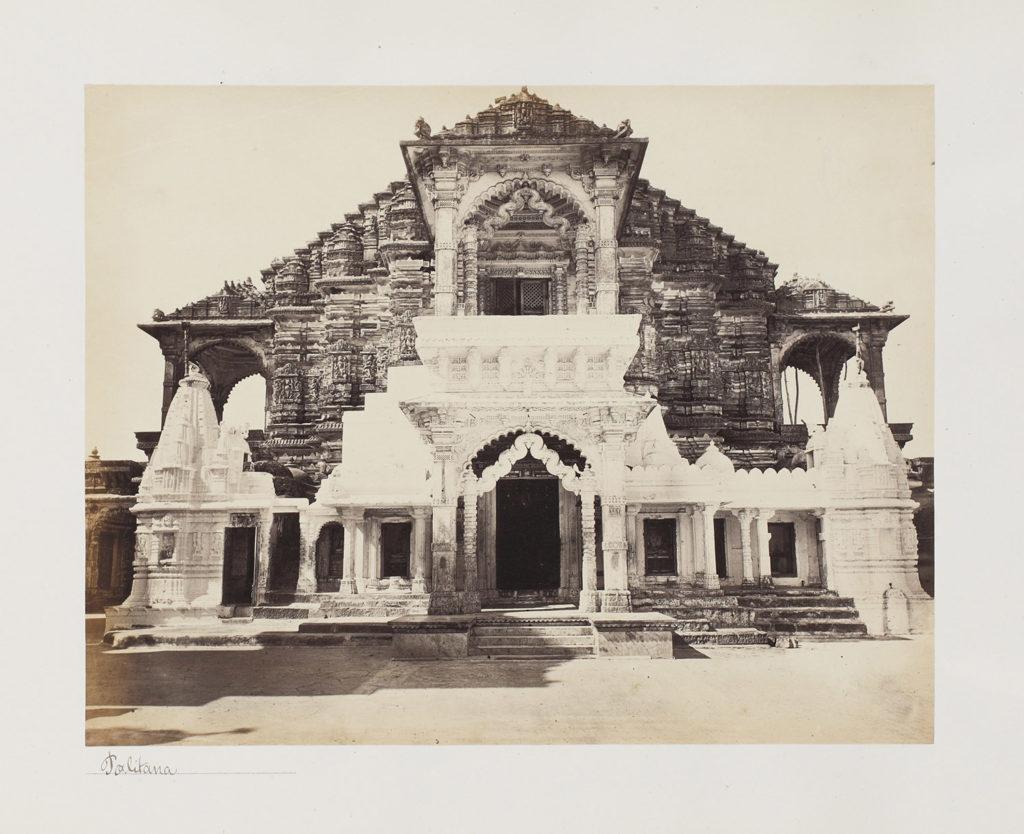 According to this profile by Luminous Lint, “His photographs were shown in the Photographic Society of London Exhibition of 1869 and were there praised for their ‘tenderness and delicacy’.” 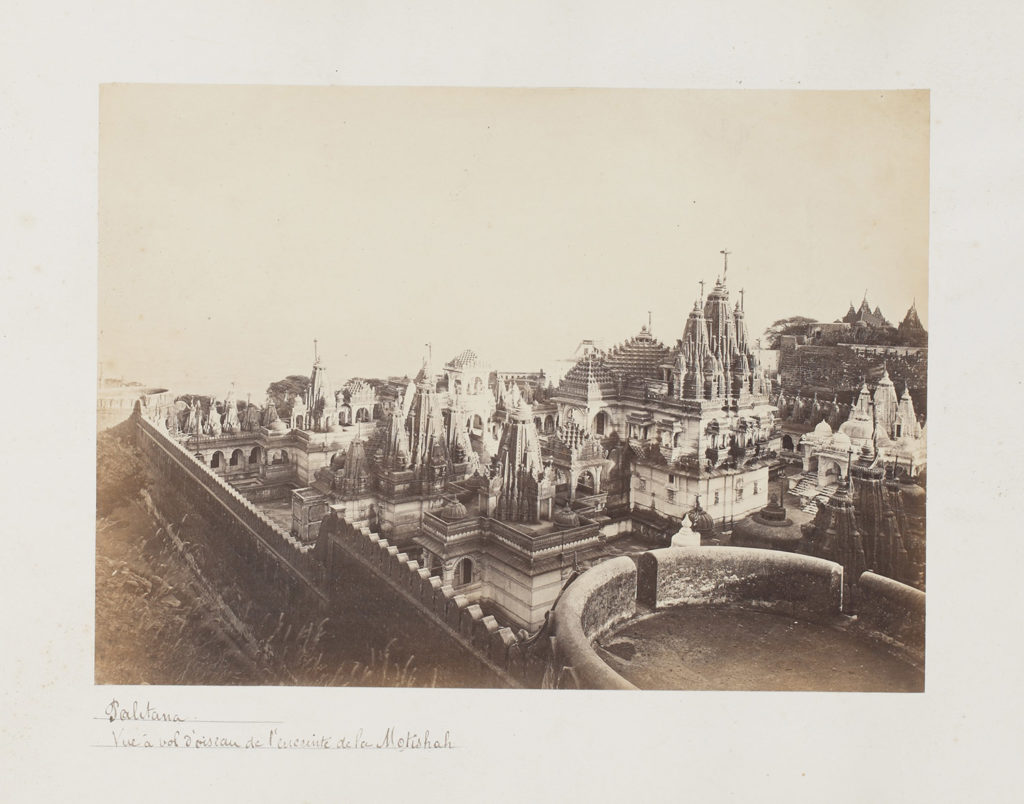 Abhiniti Ahuja is a Curatorial Assistant at Sarmaya

Framing the Jina: Narratives of Icons and Idols in Jain History by John Cort. Published by Oxford University Press.