The art of Mata-Ni-Pachedi originated as a subversive form of worship among the Vaghris, a tribe from Gujarat and Rajasthan who were prohibited from entering temples by the upper castes. The Vaghris are devi-pujaks or devotees of the divine feminine and they create intricate paintings on textiles that serve as easily portable shrines to a dazzling variety of goddesses. One way to tell them apart is through the animals that accompany them and serve as their mounts or vahans. Here we examine three Mata-Ni-Pachedi paintings from the Sarmaya collection by Sanjay Chitara, a traditional artist from Ahmedabad, and decode the devis within. We had help from Temple Tents for Goddesses, an authoritative book on the art form by Eberhard Fischer, Jyotindra Jain and Haku Shah from the Sarmaya library. 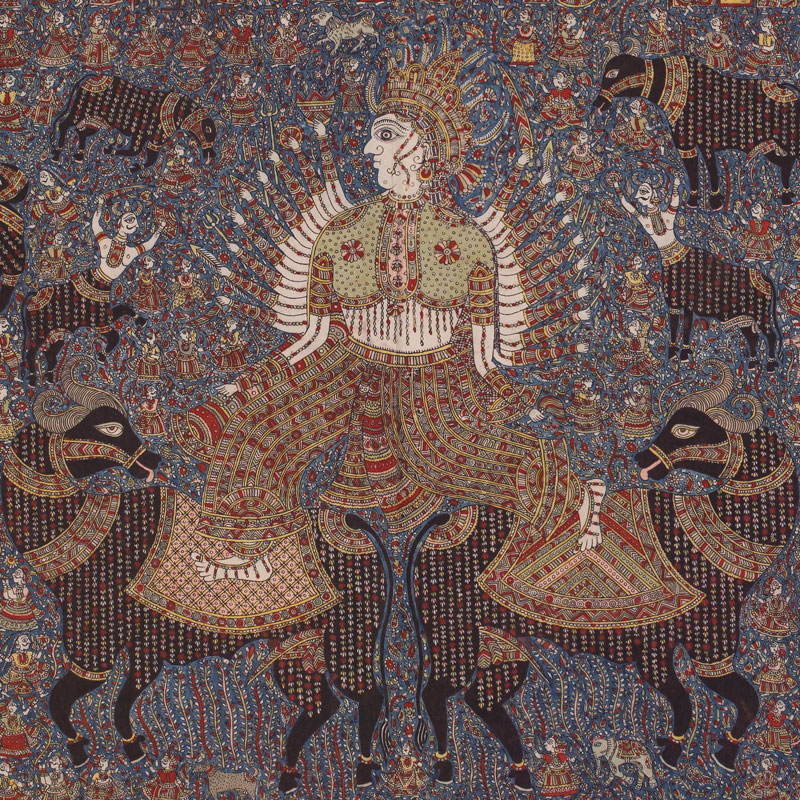 Vis is Gujarati for twenty and haat is arm, making this twenty-armed goddess an invincible warrior. Vishat Mata’s vahan, a gift from Lord Vishnu, is a black buffalo—not to be confused with Meladi Mata’s black goat, whose horns are straighter and tail is shorter. She is often found on chandarvos or canopies and is one of the most important goddesses of the Vaghri tribe. It is believed that Vishat Mata created a drummer-man from the sweat of her breasts; Vaghris believe they are descended from this man.

Vahanvati Mata rides a goat on a boat 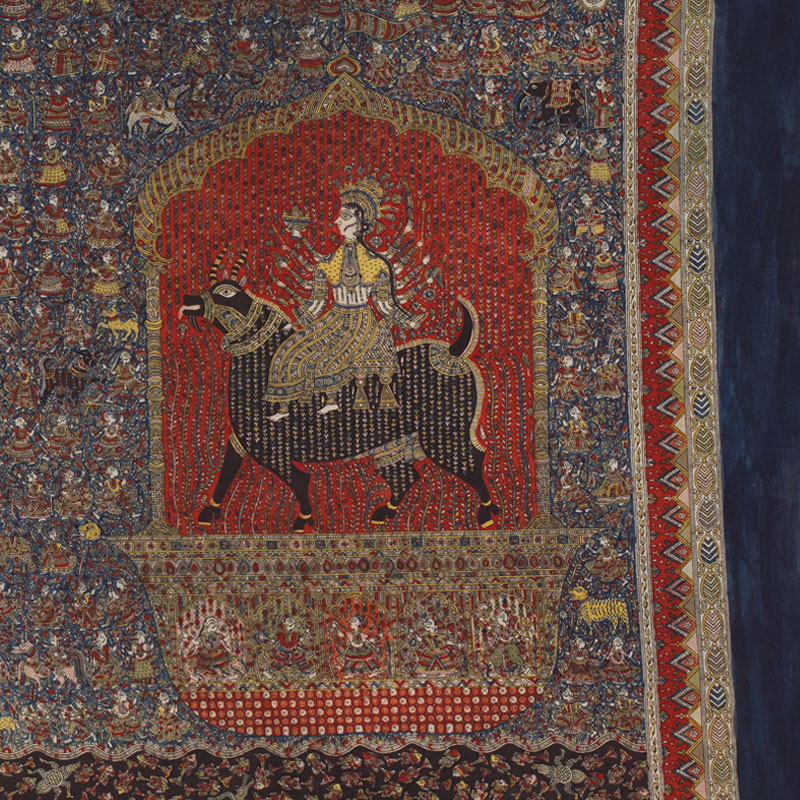 You’ll be forgiven for confusing her with Meladi Mata who also rides a black male goat. But zoom out a bit and the difference becomes apparent. Vahanvati Mata is the patron saint of sailors so her vahan has his hooves planted firmly on a boat with flying sails and drifts on waves teeming with aquatic life. She goes by other names—Shikotar, Harsiddhi—and is worshipped by seafarers and traders, and Rajputs as well as Vaghris. 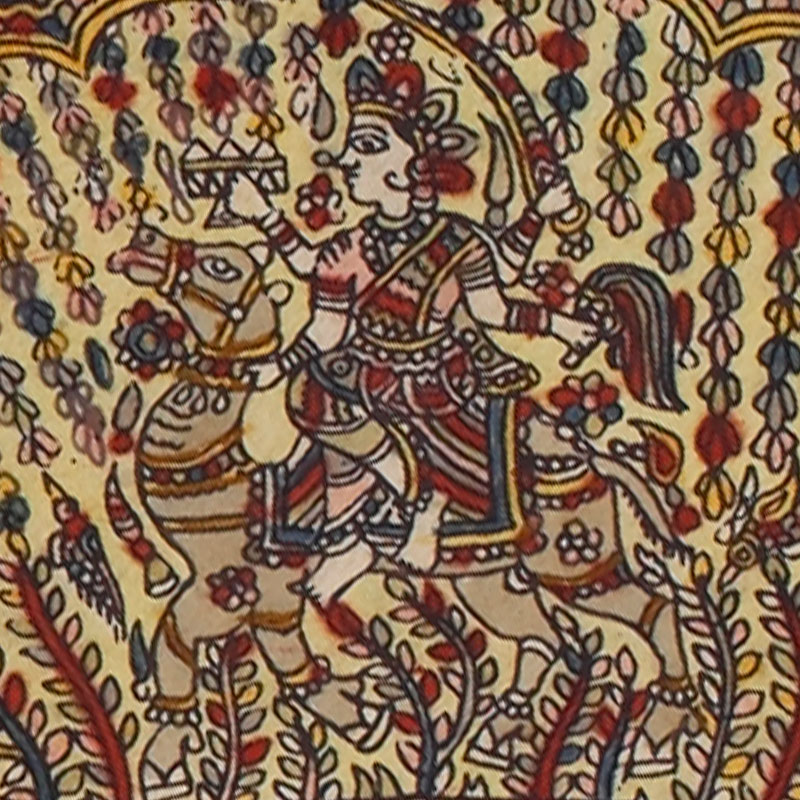 Dashamaa, as she is also known, hails from the Kutch region so naturally she is ferried by the fascinating ungulate known as the ‘ship of the desert’. Devotees of this goddess offer small clay camels as a tribute to request her divine protection of their health, livestock and harvest. Animal sacrifices were once made to Dashamaa—mainly goats and water buffalo, never camels. Here’s an interesting fact about these desert creatures: during the monsoons, they swim out to mangrove islands off the coast of Kutch and get their fill of the rainwater that collects there. Read more about the camel cultures of India here. 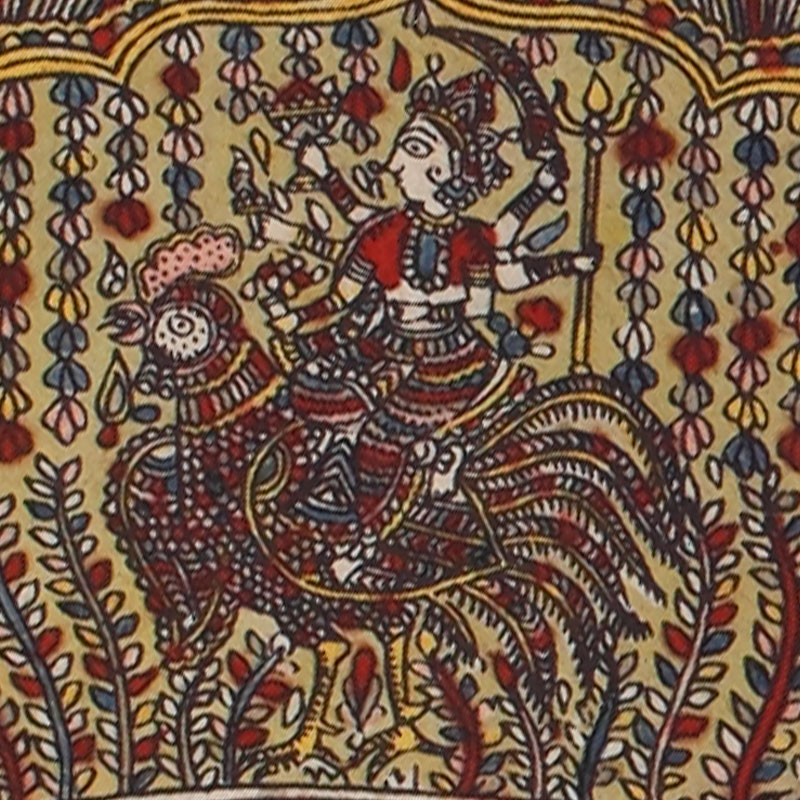 Benevolent protector of India’s hijra community, Bahuchar Mata or Becharaji is most commonly seen seated on a rooster with a splendidly coloured tail. The bird represents virility and devotees of the goddess seek help with infertility, among other maladies. Historically, the goddess has also been portrayed with a peacock as her mount, with the same rainbow-like trailing plumage. Both birds are venerated and killing the rooster for food is prohibited among Bahuchar Mata’s followers. 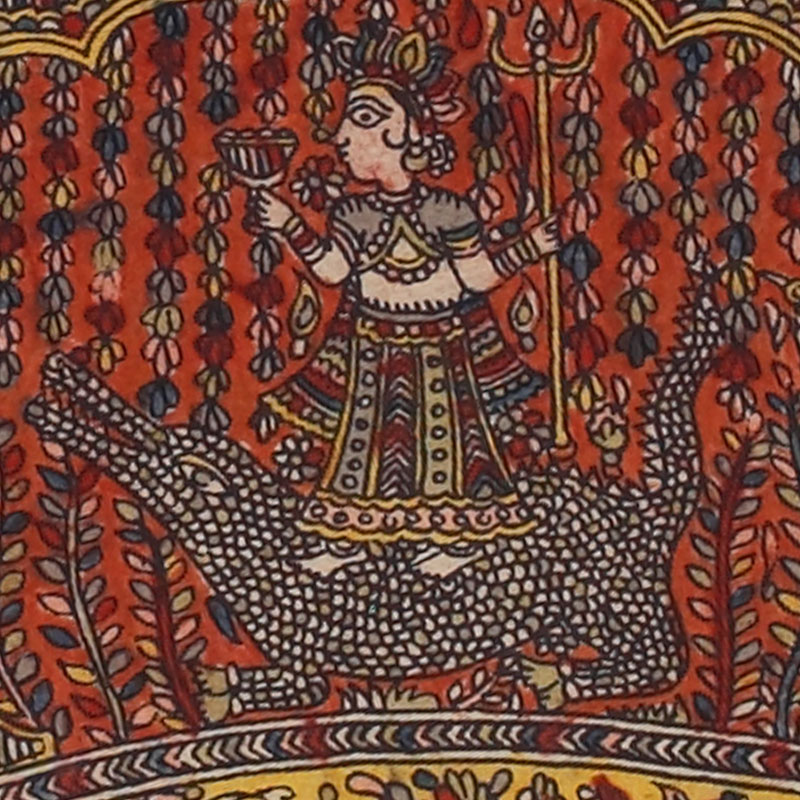 It is believed this goddess’s name is derived from the Gujarati word for invalid or physically disabled, ‘khod’—one of the legends of her origin has her appearing in the form of a snake and being kicked by her father as she slithered down a hole, causing injury to her spine. Her worshippers trust in Khodiyar Mata’s power to predict the quality of the upcoming monsoon. She’s associated with water bodies as is her vahan, the crocodile. The reptile is believed to have swum to the rescue of the goddess and her sisters when they were hiding from the soldiers of a vengeful king, whose buffalo she had killed. As a tribute, Khodiyar Mata’s crocodile wears a gold ring in his nose that belonged to the king’s buffalo. Recently, a six-foot-long real-life croc wandered into the goddess’s shrine at Palla village in Gujarat and had to be rescued from its devotees. 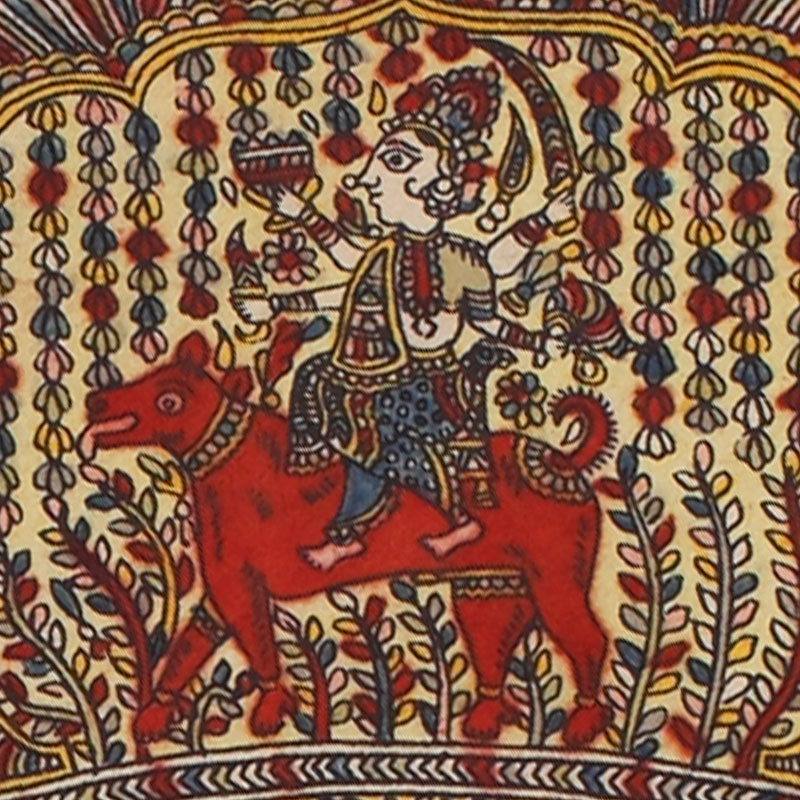 Also referred to as Hadaksha Mata by artist Sanjay Chitara, this goddess protects her flock from rabies. Naturally then, her vahan is a dog. Rabies is a real and present danger due to the large population of dogs that live in and around towns and villages in Gujarat. According to Temple Tents for Goddesses, anyone with rabies is taken to Hadkai Mata’s shrine where they vow to give up rice, sugar and coconuts, besides bathing and cold foods, for one and a half months. Some smaller hospitals near Ahmedabad feature shrines to the goddess with a very specific mandate. 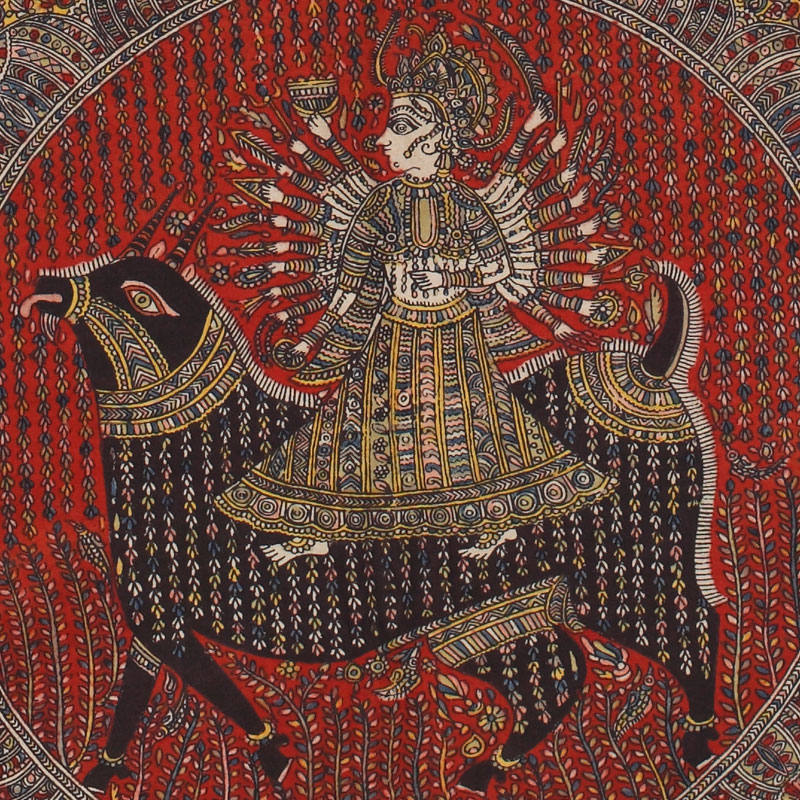 The legend of Meladi Mata is as moving as the plight of the people who worship her, ie Dalits and other disenfranchised communities. She is the goddess of the ‘impure’ realm, named after the Gujarati word for dirt ‘melu’. She inhabits the shadowy margins where mainstream gods fear to tread, like cemeteries. There are a couple of legends explaining her origin. One has it that Parvati created Meladi from the dirt of her body and bestowed upon this daughter divine shakti or strength as well as the black male goat as mount. Another story places Meladi as the daughter of Ravana, who defied her family to marry a man from an ‘untouchable’ caste; she ends up immolating herself on his pyre, thereby finding her niche at crematory grounds. 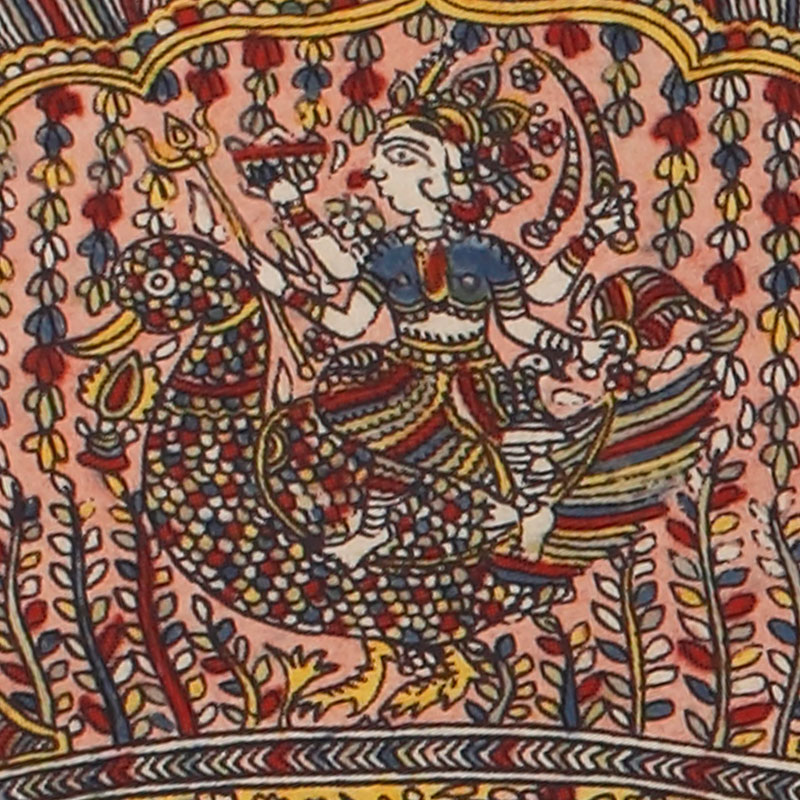 Brahmi or Brahmayi Mata represents the female form of Brahma and a benevolent aspect of the divine feminine. Her vahan is the hamsa, which is depicted variously on Mata-Ni-Pachedi paintings as a duck, a goose or a swan—differentiated by the shape of their bills and length of their necks. Interestingly, the hamsa is also the mount of Brahma and his divine consort, Saraswati. There’s been debate in academic circles about the precise species that hamsa refers to and while there’s no conclusive proof, most artists render this vahan along the lines of the Indian bar-headed goose or Anser Indicus.

These goddesses tend not to occupy centre stage in Mata-Ni-Pachedi paintings, rather they appear in a panel clubbed with other goddesses; some of them do, however, have temples to their names in Gujarat and Rajasthan. They represent different aspects of the divine feminine and their vahans are shared by other folk and mainstream goddesses. For instance, Dravidian goddess Kateri Amman as well as her sister to the north, Devi Chamariya, both are depicted riding a boar or pig. Similarly, Solanki Mata’s elephant bears a resemblance to Airavata, the vahan of Indra. Sagat Mata’s vahan, the bull, hints at her dominion over demonic powers as typically embodied by the black, male buffalo. 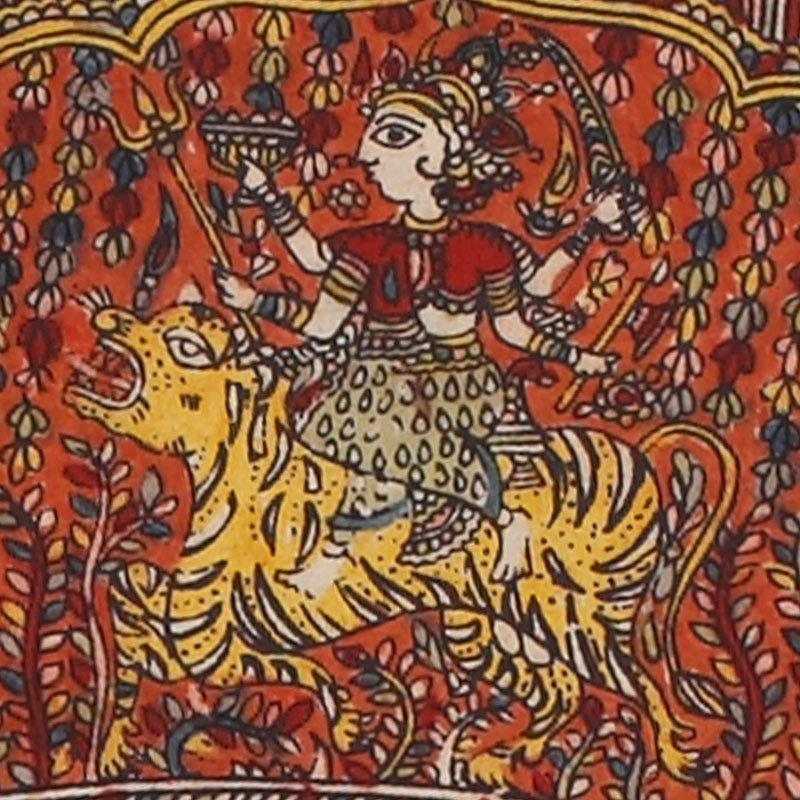 Ambika or Ambaji Mata are also names of the goddess derived from the word ‘ambe’ or mother. She is sometimes portrayed riding a lion, but here the artist has chosen to give her an equally common choice, the tiger. Armed with a trident, a sword and shield, among other accoutrements, Ambe Mata is the angry or ‘rudra’ avatar of Shakti and her vahan underlines this fearlessness. Given her mount, she is also referred to as Vagheswari, vagh being the Gujarati word for tiger. 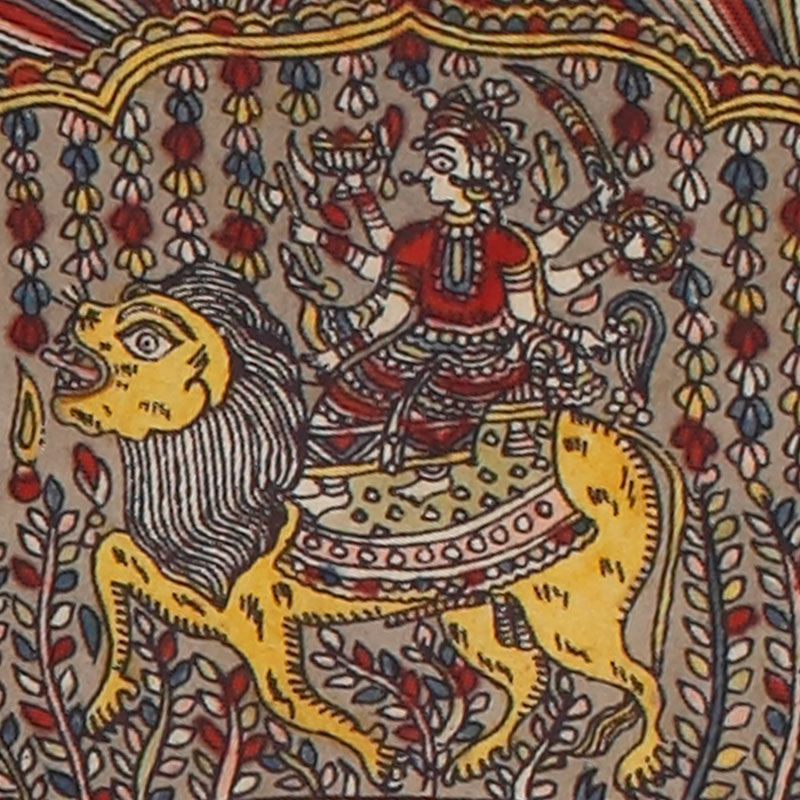 In this painting, Goddess Durga is shown as distinct from Ambe Mata by her vahan and the presence of six arms to the latter’s four. However, the tiger and lion are used interchangeably while depicting these two goddesses. Legends have it that the lion is a gift from the god of the Himalayas, Himavan. The big cat pins the demon Mahishasura down so Durga may finish him off and fulfil her destiny.