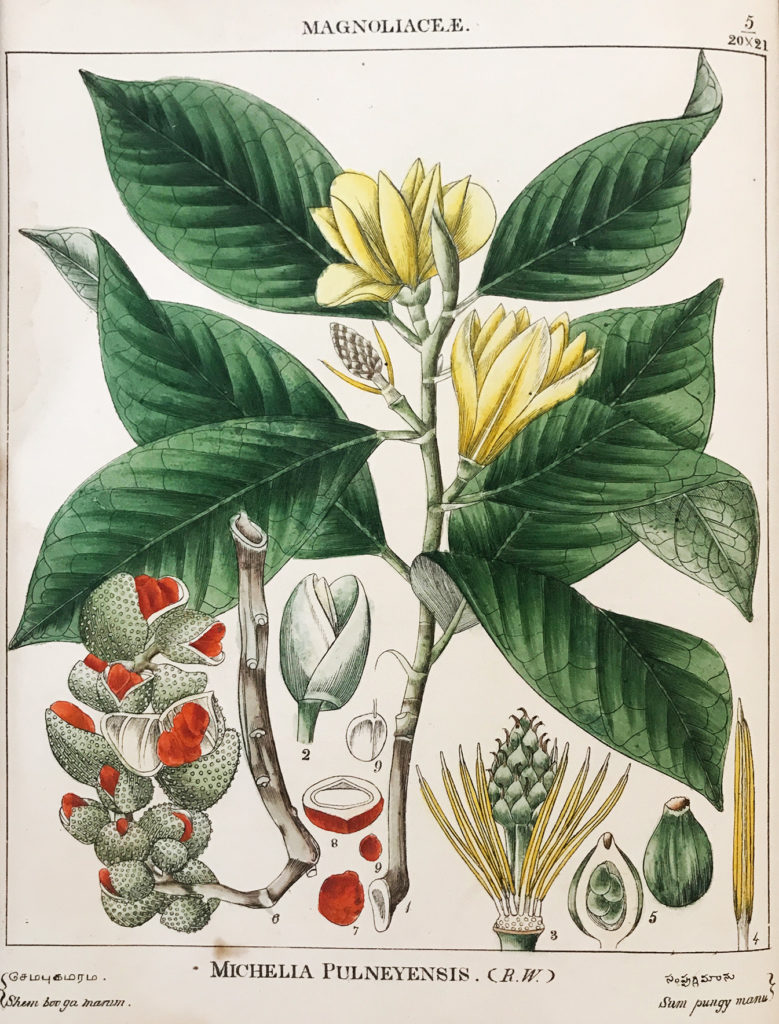 In Sarmaya’s rare books collection, a recently acquired 180-year-old volume holds a special place for being part serious science, part elegant art. Indian Botany was written by Dr Robert Wight, a Scottish surgeon for the East India Company in the 19th century, who later worked as a botanist and taxonomist in south India. While the book was a scientific survey of sorts, the botanical illustrations that accompany the text are outstanding works of art. These fantastically detailed and lusciously coloured diagrams represent a marvelous melding of east and west because like most Company officials, Wight employed Indian artists to illustrate the plants that he studied and collected. 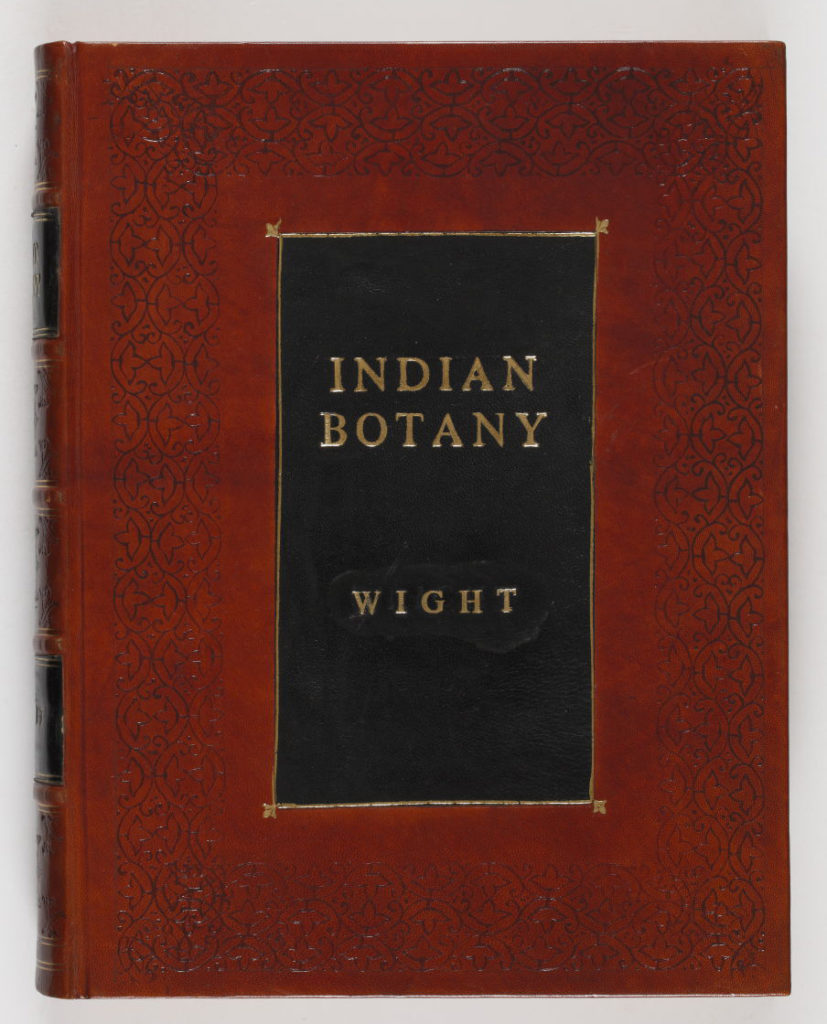 To understand and learn more about these botanical drawings, we spoke to a noted expert on the flora of the Indian subcontinent, Dr Henry Noltie. He’s worked as a curator, taxonomist and research associate at the Royal Botanic Garden Edinburgh (RBGE) for over 30 years, where he studied the historical aspects of its rich herbarium and collection of illustrations. With degrees in botany and museum studies, Dr Noltie explores subjects where nomenclatural research overlaps with art history.

In Forgotten Masters: Indian Painting for the East India Company, a 2019 book edited by writer and historian William Dalrymple, Dr Noltie catalogues a select few Indian botanical drawings and highlights the skill of their often unnamed artists. Like with his earlier work on Robert Wight, he aims to expand the focus from the commissioner to include the artists. With his research, he sheds light on a forgotten moment in Anglo-Indian history during which Indian artists responded to European influences while keeping their own artistic visions and styles intact.

In this interview with Sarmaya, Dr Noltie elaborates on the diversity and backgrounds of the Indian artists, and explains how difficult it has been to trace their history and the significance of their work. 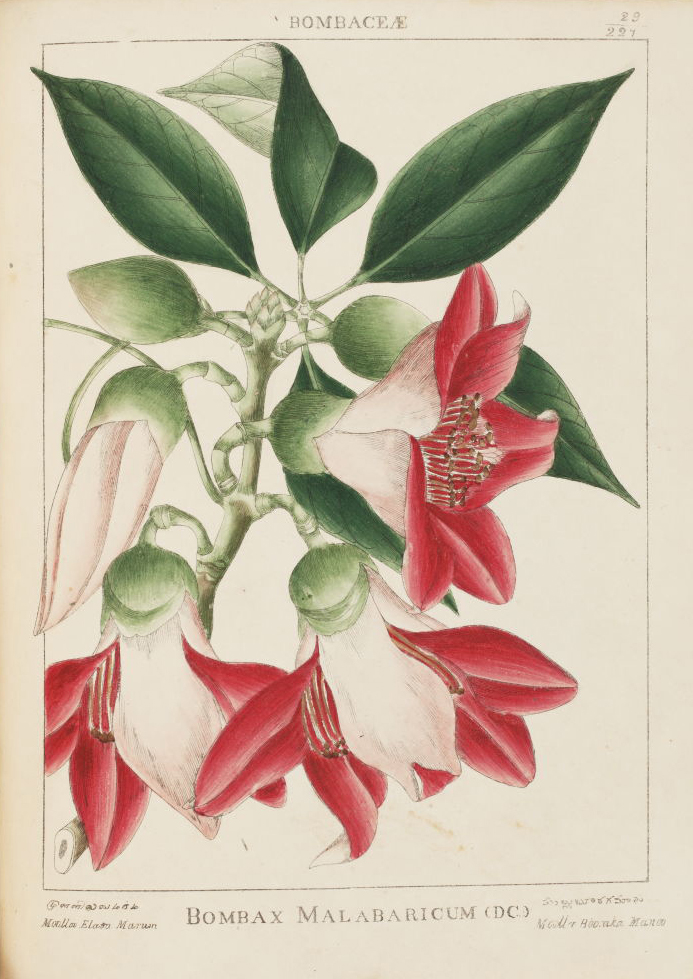 What were the backgrounds and qualifications of the Indian artists commissioned by British botanists working for the East India Company?

The problem is that the artists themselves left no written records, so that any information about them has to be pieced together from fleeting references in the documents of the patrons, and assumptions based on painting styles and techniques. Naturalistic work of this sort had almost never previously been required of Indian artists (with the famous exception of the work of Ustad Mansur for the Emperor Jahangir). The old assumption was that when this sort of work started to be produced, especially for the British in the 1770s, it was artists who had previously worked in royal courts, whose sources of patronage had dried up who were used. This may well be true in North India – where painters who originated in Murshidabad, but who had migrated to Patna, seem to have been used by the Scottish doctor James Kerr, then by Lady Impey.

However, in the west, south, and east of the country the story was much more varied. It is almost certain that the artist who worked for the Frenchman Nicholas l’Empereur in Odisha in the very early 18th century was a textile painter, and it is highly likely that (Scottish surgeon) William Roxburgh’s painters on the Coromandel Coast in the 1780s were also chintz painters. Those used by botanists based in Madras and Tamil Nadu seem mainly to have come from the school of artists based in Tanjore (Thanjavur), who were of the Raju and Naidu castes, and were Telugu speakers, who supposedly moved south with the breakup of the Vijayanagara empire. However, much further work is required on these painters, as to the British they were known as ‘moochies’ who of course were of a rather low caste, working with leather, and making objects like saddles and toys. In Shimoga in the 1840s, the artist used by Hugh Cleghorn appears to have been from a sandalwood carving caste. In the Bombay Presidency there seems to have been greater difficulty in finding artists, and Alexander Gibson (another scottish surgeon who worked as a botanist in India) in the late 1840s used a ‘Portuguese’ artist, presumably from Goa.

The artists must have come from art/craft backgrounds, and therefore had inherited, or been taught through apprenticeship, the necessary skills. As for qualifications, the fact that for Indian patrons these skills would have been applied to other subjects (gods, epics, etc) or on different materials (chintz, wood carving) merely shows the artists’ adaptability. 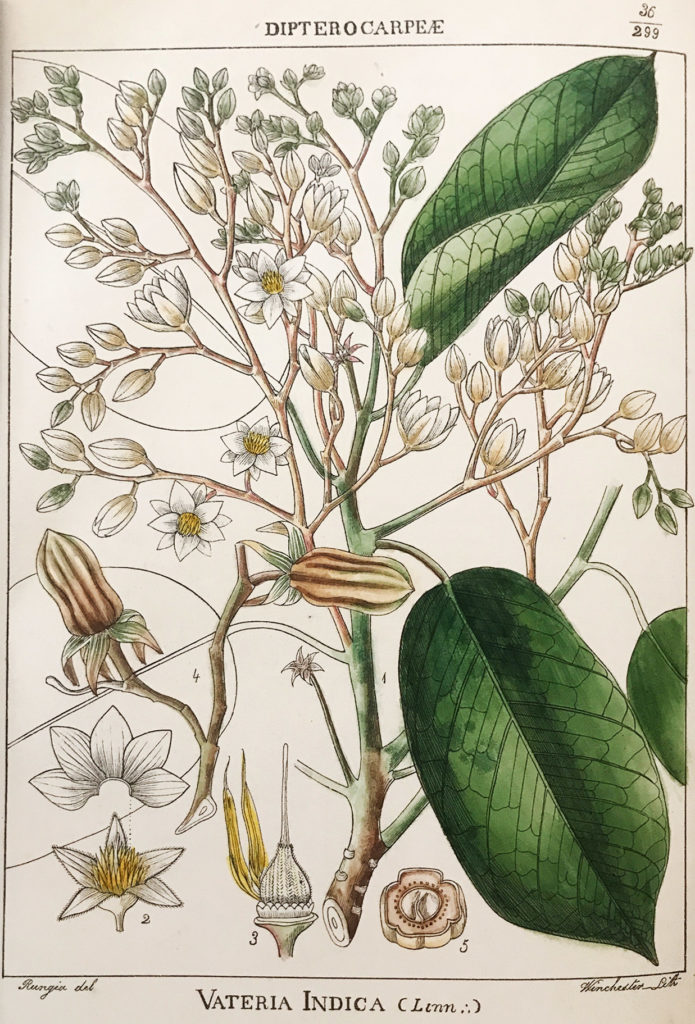 In your essay in Forgotten Masters, you mentioned that the Indian artists were given European botanical illustrations as reference. Were they given any kind of special training?

Because of lack of documentation we know very little about this. But the botanists must certainly have told the artists which parts of the plant to paint – those structures essential for their accurate identification, especially the flower parts. It was vital that they showed these accurately, for eg the correct number of petals, stamens etc. But with their traditional practice of copying, Indian artists would easily have been able to be able to do the necessary by being shown visual examples. They were, however, given freedom in how they arranged the composition of the plate, which is usually very different to the way a western botanical would have composed it. 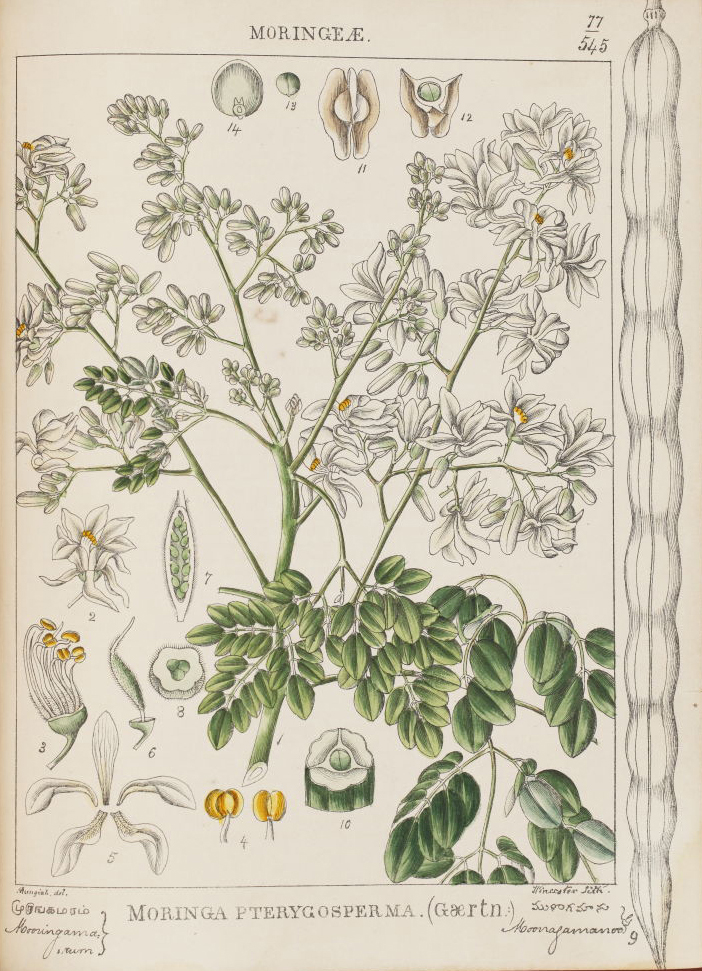 How did the botanical illustrations differ from region to region in India? How do they differ from their European counterparts?

The differences largely result from the different backgrounds of the artists. The ‘Northern’ ones (largely made in Calcutta) tend to be much more highly finished, using the traditional techniques of building up layers of paint and burnishing. Roxburgh’s artists painting technique was much more simplistic, with strong outlines, but relatively simple ‘colouring in’, as one might expect from textile painters. Cleghorn’s Shimoga artist had a remarkable calligraphic style, with a virtuosic use of line (and again, simple colouring), that I think has parallels with sandalwood carving.

Difference with Europeans lies in the compositions – Indian artists hated empty space, and wanted the composition to fill as much of the sheet of paper as possible, which often meant that leaves go right to the edge of the paper, and are therefore ‘chopped off’. In terms of paint, European artists tended to use pure watercolour (i.e. not using opaque white), whereas Indian artists used opaque pigments, mixed with white. Indian artists also tended to use more in the way of varnishing, by using gum arabic on top of the paint to add gloss and richness, particularly on the leaves. 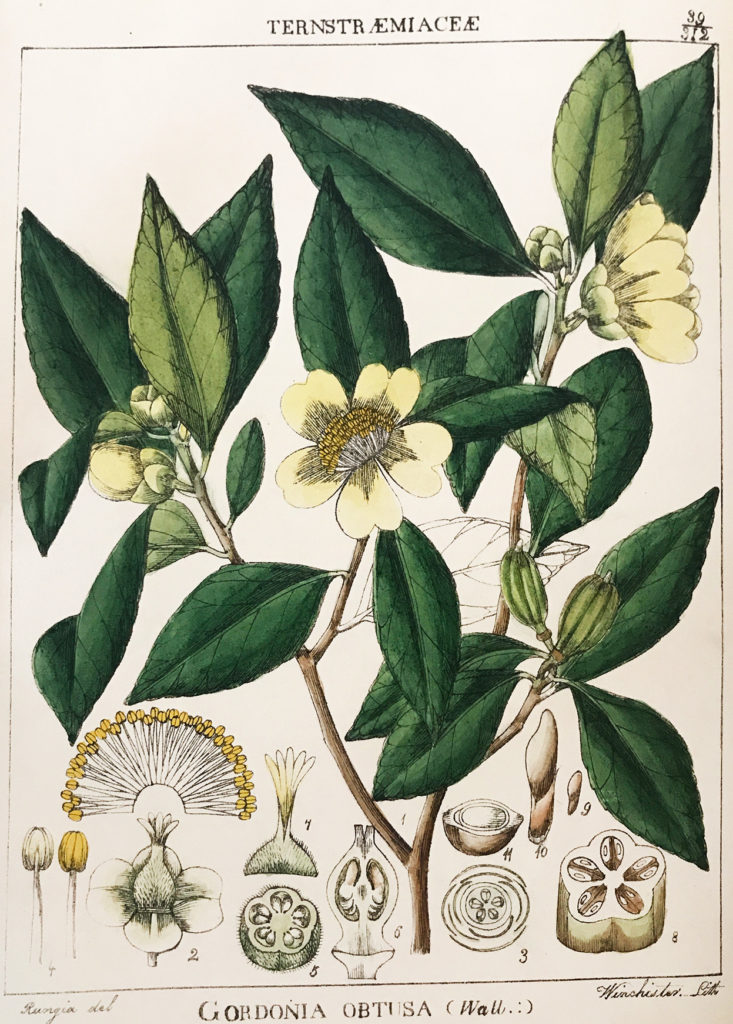 What can you tell us about the biographies of these Indian artists?

Regrettably, absolutely nil. Unless scholars with Indian language skill can find presently unknown sources, it is likely to remain this way. It has been a major step forward even to find out some of their names.

How important would you say was these artists’ contribution to studying the flora of the Indian subcontinent?

These artists made a major contribution to the study of the Indian flora, even if it was largely unacknowledged by their patrons. However, Robert Wight, and Nathaniel Wallich were scrupulous in adding the names of the artists when their works were published. The importance is due to their botanical accuracy, and their drawings are still consulted by botanists. In many cases, the drawings were made from the same specimens on which new species were described, so that they are part of what is called the ‘original material’, that is the vouchers or ‘types’ of those new species. 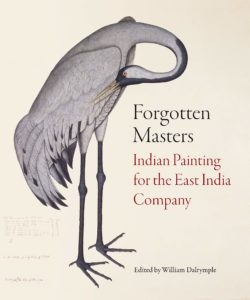 In terms of culture, as we have tried to show in Forgotten Masters, these works represent an absolutely key stage in Indian art history. They are also works of surpassing beauty.

What was the process that you believe was followed to make the illustrations? Were the plants and flowers studied in the wild? Or were they plucked and preserved?

The answer is both. Probably the majority were drawn from living specimens, and artists were taken on field excursions (e.g. Sita Ram was taken on the Hastings expedition, and Wight sent his artist with his plant collectors). However, often drawings \ did have to be made long after the collection of the specimen, from dried, pressed material (i.e. herbarium specimens)— we know that Rungiah did this. I have also just been looking at the collection in the Calcutta Botanic Garden, which includes the drawings made for the posthumous publication of the works of William Griffith in the 1840s. Griffith left field sketches, but a team of artists including Lutchman Singh reworked these preparatory to the lithographs being made – some say ‘ad viv.’ (i.e. from life) others ‘ad sicc.’ (i.e. from dried specimens). 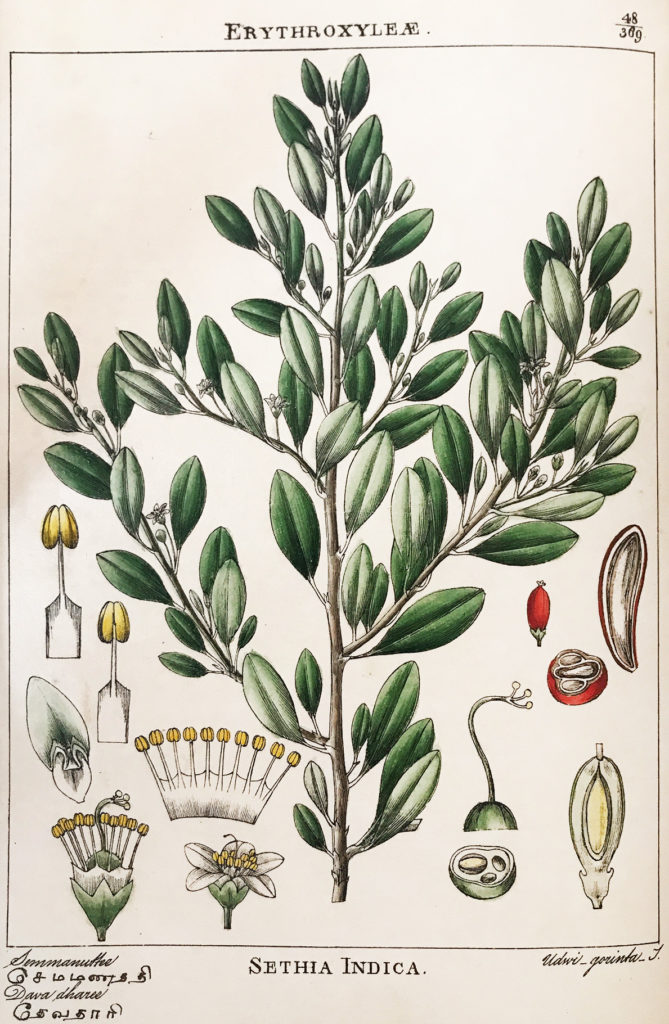 In your travels to India, did you find any existing form of the type of botanical art that the Indian illustrators practiced?

This sort of botanical art seems to have gradually died out in India. Previously, I had thought this happened around the 1870s, but my recent work at the Calcutta Botanic Garden shows that the tradition was still vigorous there until around 1916, with a few examples dated as late as 1935. After this it really did stop, until a great worldwide renaissance of interest in the genre from the 1990s onwards. Notable contemporary practitioners in India are Hemalata Pradhan in Kalimpong, who trained at the Royal College of Art in London and is now teaching children in Kalimpong. Nirupa Rao based in Bangalore has recently made the illustrations for a beautiful book on the trees of the Anaimalai Hills, subjects that are very difficult to photograph, and for which artistic skills can make a unique contribution.