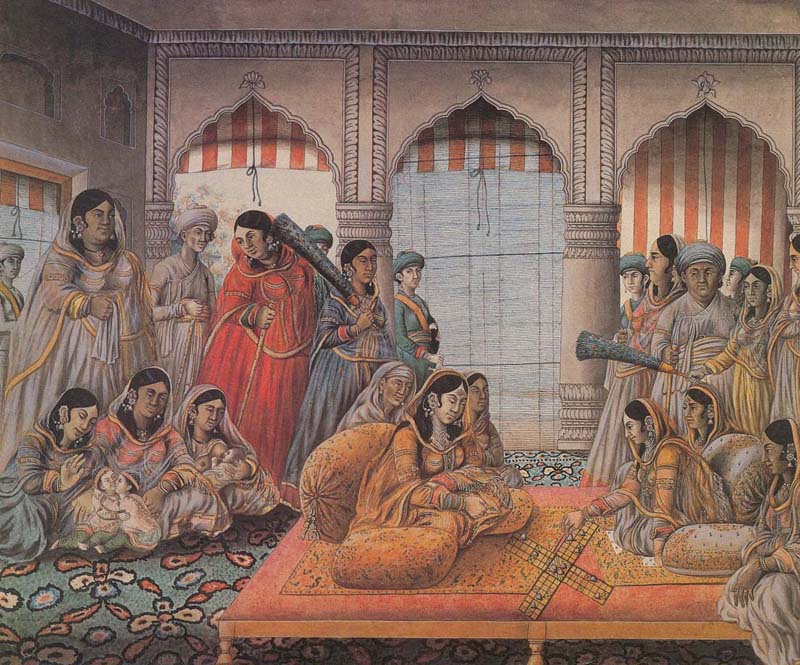 Senior Wives Playing Chaupar [a version of pachisi] in the Court Zenana with Eunuchs; possibly by Navasi Lal after a lost original by Tilly Kettle, ca. 1790, from the James Ivory Collection. Source: Columbia University

In India we’ve always made sense of the world around us through stories. A closer look at the practices and rituals associated with our very peculiar art of storytelling reveals our limitless proclivity for play. There’s evidence that our ancestors used toys and games as aids to build interactivity into their stories. History books are replete with instances of our kings sitting down for a game of chaturanga, from which chess is believed to have originated and begun its travel along the Silk Route. Mythology attests to our penchant for games too, evidenced by the numerous mentions of Shiva and Parvati playing a round of lighthearted pachisi, scattered among our texts. 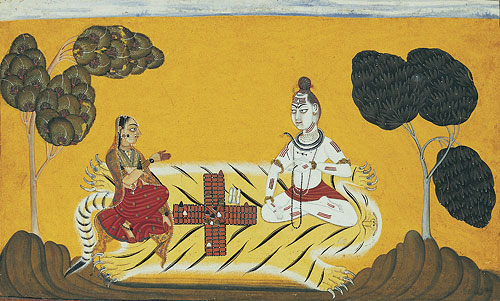 Proof of this playful ingenuity can be found hiding even today in old palaces, ancestral homes, temples and museums. We’ve compiled a list of our favourite Indian games and storytelling rituals that attempt to bring a bit more to the table than entertainment. 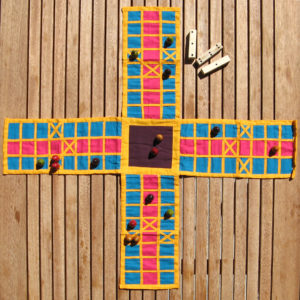 A game that originated in medieval India, pachisi was traditionally played on an embroidered, cross-shaped fabric that served as a board. Players throw cowrie shells to determine the movement of their pieces across the board. The game is a race to the finish and up to four participants can play at a time. It is a common practice to attempt to distract your opponent during the game and there’s even a popular story around this:  A king who loved to play pachisi used to enlist the services of his trained mice Sundhree and Mundhree to choreograph his victory.  The said king would engage his opponent in banter while his animal accomplices would scamper to move the pieces around the board.

Guest appearance in: An illustration from 15th-century poet Bhanudutta’s Rasamanjari in which Shiva and Parvati are shown playing a game of chaupar, a variation on pachisi 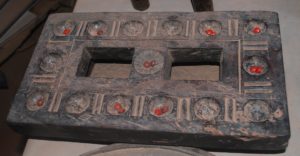 Pallanguzhi is a traditional two-person game that was born in present-day Tamil Nadu and is still played in many parts of southern India. It’s played on a wooden board with 14 cups or pits and kicks off with the equal distribution of seeds. The players compete to accumulate the maximum number of seeds in their designated pits. The game is supposed to help players build motor skills and master arithmetic strategy.

Guest appearance in: The Ramayana. Sita is believed to have played the game as she waited to be rescued from Lanka

Learn as you play 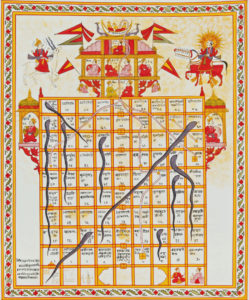 The renowned Indian poet saint Gyandev invented Mokshapat, an ancient version of snakes and ladders in the 13th century. Each square on the board is meant to signify a certain virtue or vice and the ultimate aim of the game is to attain nirvana or moksha, which can be found on the last square. Through Mokshapat children were taught that their actions have consequences, both good and bad.

Kavadiya @akhshaygandhi gets featured by @firstpostin where he speaks about the fading art of Kavad Katha and its last few practitioners. Plus an impromptu performance! #kavad #kaavad #kavaad #rajasthan #folkart #folk #kavadiya #stillspacetheatre #desi #india #folk

At the centre of the vibrant storytelling tradition from Rajasthan called Kavad Katha is a specially crafted moveable shrine with multiple panels that unfold to tell stories of the gods. All the storytelling eventually leads up to the ultimate reveal located at the center of the device. It is one of our many traditional forms that employ the concept of play to tell stories.

Shuffling through the epics 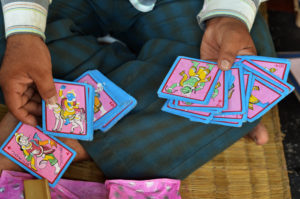 Ganjapa, a card game crafted in Odisha, is a version of the one we are familiar with today and its origins can be traced back to Persia and the Mughal court of Babur. The game is charactersied by the use of a pack of circular Pattachitra-painted cards. Suits are colour-coded, each containing 10 numbered cards, a vazir and the highest-value player, the king, usually painted sitting in a cross-legged posture. While this is your most basic suit, special edition Ganjapa cards also depict godly characters from Hindu mythology and the epics. Ramayana and Vishnu’s Dashavatara are popular themes.