For most of its life, Madhubani or Mithila painting was an intimate art form, meant for a small audience even within a family. Making this art was an intrinsic part of a woman’s household chores: tend the hearth, sweep the yard, paint the walls. A mother-in-law would welcome the bride marrying into her home with precisely drawn geometric patterns on the walls of her new bed chambers or khober-ghar. These paintings came to be known as khober and besides being things of beauty, they were believed to have the power to enhance fertility.

Till the Thirties, the world had never seen a Madhubani painting. In 1934, during the terrible Nepal-Bihar earthquake, the walls of the homes in Jitwarpur, Bihar collapsed, exposing the inner chambers and the stunning artworks that snaked all over them like lush vines. William G Archer, a British officer, took photographs of the paintings and wrote about them in 1949 for Marg magazine. Another disaster in the form of a drought in 1966 would nudge the artists out from within those painted walls and into the marketplace.

Baua Devi was only a teenager in the Sixties when a Mumbai artist called Bhaskar Kulkarni came visiting her village, Jitwarpur. Encouraged by him, the women and girls of the community learned how to transfer their artistry from the walls to paper. Baua was part of a pioneering generation of Madhubani artists who would make that shift. Legends like Jagdamba Devi and Sita Devi would blaze ahead and bring great honour—not to mention, two Padma Shri awards—to Jitwarpur. Baua would go on to make her own distinctive mark upon the field. 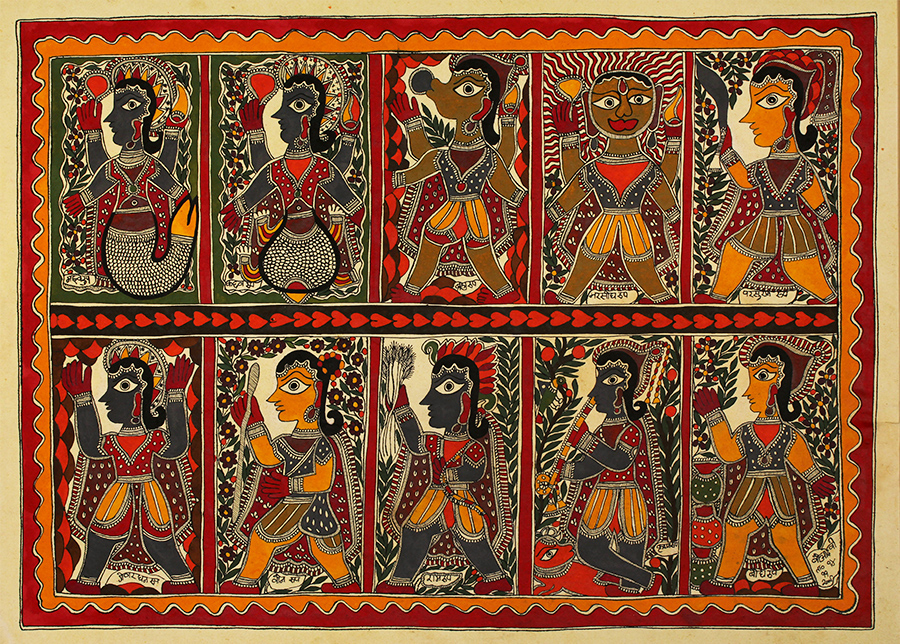 It is believed that Mithila art originated during the time of the epic Ramayana. Sita’s father, King Janaka asks the women of Mithila, a region that encompasses portions of present-day Bihar and Nepal, to paint the walls of their homes to celebrate the wedding of his daughter with Lord Rama. It later came to be called Madhubani art for the district where the practitioners of this art are concentrated. Common themes include the wedding of Rama and Sita, the courtship of Lord Krishna and Radha and scenes from the Mahabharata.

Baua Devi uses modern motifs (peep the red hearts in the painting above) and topical issues to make her canvases brim with urgency and life. But the colours are still largely made by hand so her paintings feel organic and earthy. There is a strong feminist perspective to Baua Devi’s work, whether she’s depicting the raw power of Kali’s roar (below) or articulating the interior life of the Nag Kanya, a creature with the head and torso of a woman and the lower body of a snake. 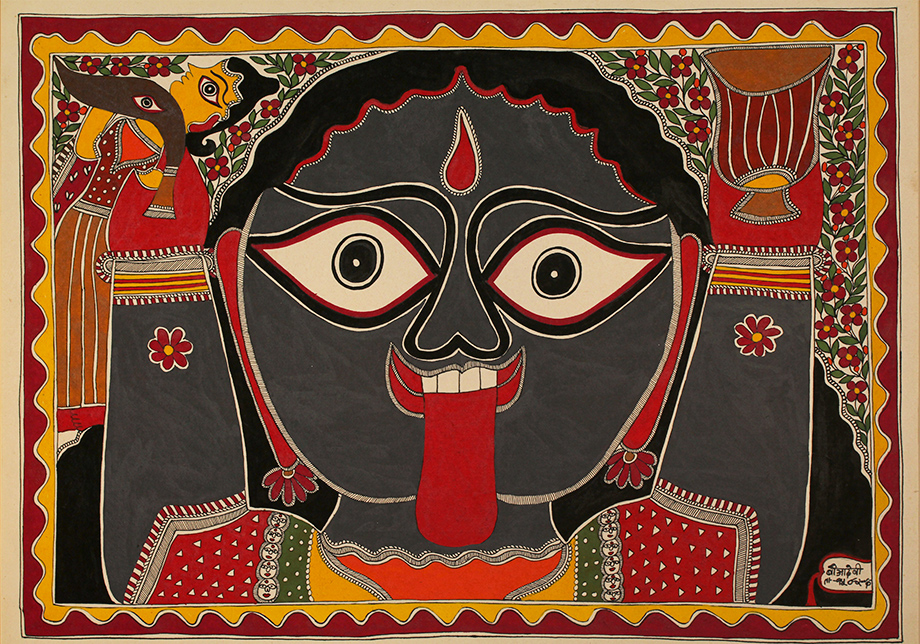 By the time a young Baua found her feet and her oeuvre in Mithila art, the world was ready for her. She won the National Award in 1984 and became the sole Mithila artist—and sole Indian woman—to show at the seminal 1989 show, Magiciens de la Terre. Today, every serious collection of indigenous Indian art worth its salt carries her work and her paintings have travelled to shows in the USA, Spain, France and Japan. In 2017, she brought home to her village its third Padma Shri—Jitwarpur now holds a record in the country for most Padma awards won. At 75, Baua Devi is no longer as prolific as she once was but like her mother-in-law before her, she’s passed the baton on to her daughter-in-law and many of Bihar’s young aspiring artists. To them, Mithila painting represents not just a way to make a living, but a precious connection to the history of the land.

Baua Devi was one of the five artists whose Wikipedia profiles we edited as part of Sarmaya’s event for Art+Feminism 2019. Visit Baua Devi’s Wiki page by clicking here