It can’t have been easy for a young gay boy growing up in 1940s Mumbai. Bhupen Khakhar was born to Parmanand and Mahalaxmi, who raised him in a joint family in the bustling, middle-class neighbourhood of Khetwadi. At least initially, his ambitions toed the line. Khakhar graduated with a degree in commerce from Sydenham College, qualified as a chartered accountant and started work at a firm called AF Fergusons. On the side, he enrolled in some part-time art courses at the Sir JJ School of Art. But it would be a while before one of modern Indian art’s most exciting talents committed full-time to the muse; Khakhar was 38 when he started his career as an artist.

Bhupen Khakhar is best known for his autobiographical paintings that reflect his innermost desires. Khakhar, through the progression of his works, has explored the cultural and personal repercussions of same-sex intimacy, a theme that is relevant even today—the law against homosexuality was repealed only last year in India. His paintings provokes the viewer to reflect on their perception of the appropriateness of homosexuality in both life and in art.

Khakhar never tried to mask his sexual orientation. Whether it was his paintings of nude males in embrace, or homoerotic compositions in which Khakhar features as himself— his paintings were as uninhibited as any being created anywhere in the world. According to art critic Timothy Hyman, “‘Bhupen’ nudes signify a ‘coming out’ unprecedented in Indian culture. There are millions of practicing homosexuals in the subcontinent, but they leave virtually no trace in Indian films or literature, let alone painting.” Hence, Khakhar initially received more recognition for his work internationally than he did at home. By the time he passed away in 2003 at the age of 69, he had left behind a rich legacy of art that continues to be relevant even today. Just last month, his pioneering work ‘Two Men in Benares’ fetched a whopping $ 3.2 million at a Sotheby’s auction in London.

One of Khakhar’s primary influencers and motivators was painter, poet, and his longtime friend Gulam Mohammed Sheikh. It was he who convinced Khakhar to attend MS University in Baroda to study art criticism. Sheikh played a key role in Khakhar recognizing and pursuing his artistic endeavors, by introducing him to various prominent figures of the art-world at the time, including the artists Nilima Sheikh, Nalini Malani and Vivan Sundaram, and art critic Geeta Kapur, some of whom Khakhar would later go on to collaborate with.

Khakhar developed a unique expressionistic style of painting that satirically delineated people and landscapes. His work often alluded to and drew references from the Pop Art movement in Europe, from the works of English artist David Hockney, French painter Henri Rousseau, and early Italian Renaissance paintings, which were among his most paramount artistic inspirations. Like Hockney’s work, even Khakhar’s painting style initially revolved around representing the mundane, and about being trapped in an unexceptional rut of the ordinary. His later watercolour compositions are reminiscent of Rousseau’s decadent landscape paintings. He even drew a lot of inspiration from traditional Indian techniques of painting, which he tried to reinterpret and contemporize in his own works. 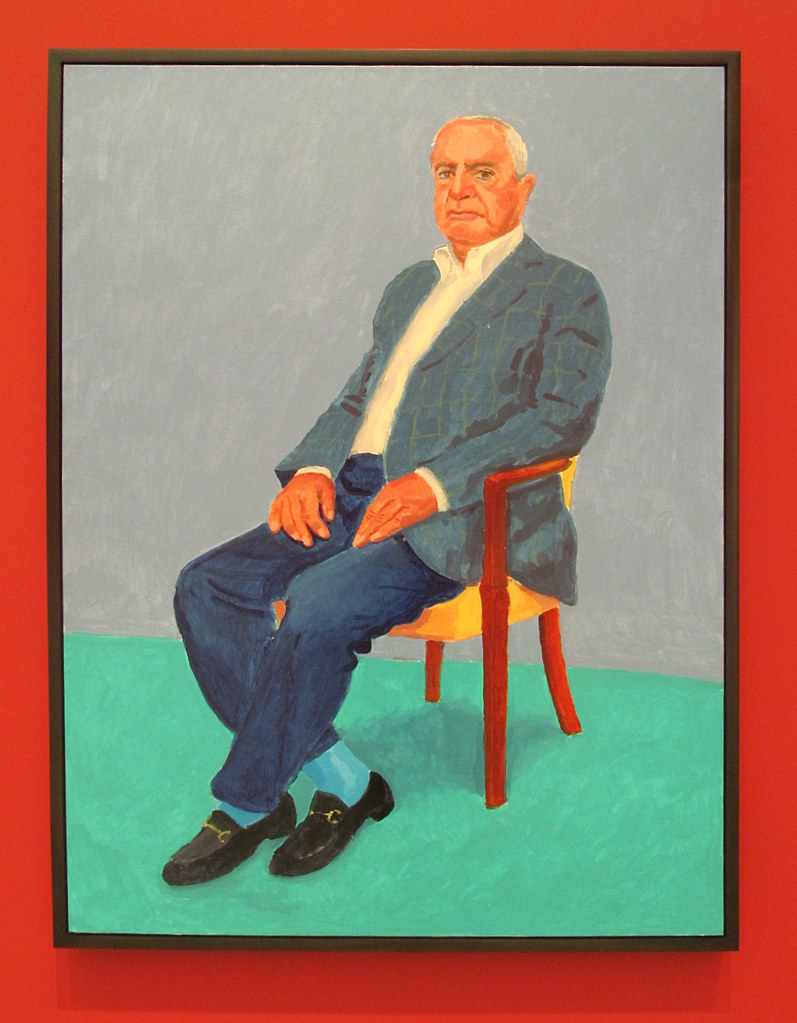 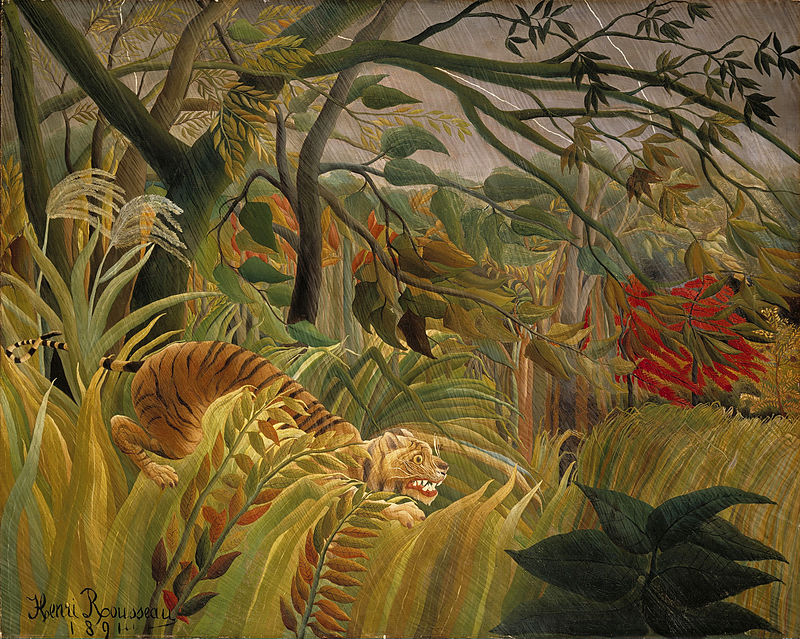 While many credit Khakhar as the originator of pop art in modern Indian art, some like Dr Devika Singh, curator of international art at Tate Modern, believe this is a superficial reading of his oeuvre. “The strength of his work… is that it’s disruptive and provokes deep questions about society.” Khakhar’s inclusion of himself in his paintings gives the viewer a rather raw and untainted passage into his life and overall persona, which was both provocative and poignant. Contemporary artists like Atul Dodiya believe that his paintings were, “so odd, strange, weird…the formation, the figuration, the subject matter, the colours… everything the way he saw it was full of humour and wit.”

The Baroda School of Art was a movement in the 1950s that sprung from the founding of the Faculty of Fine Arts in Baroda University and nurtured path-breaking artists, including Khakhar. But among the lot, he was the only openly gay artist to address his sexuality and use it as a central theme in his art. He initially used subtle nuances to provoke his viewers about the idea of homosexuality, but soon after, he directly addressed it with landmark works like ‘Yayati, 1987’ and ‘Two Men in Benares, 1985’. Given the societal stigma in India at the time, an artist like Khakhar was inevitably deemed as provocative and offensive, even though the subject matter of his art was deeply personal and likely offered some secret solace to gay across the country in the early ’80s.

Several critics believe that Khakhar had a prominent homoerotic phase wherein he explored the depths of human emotions in both ordinary people and in himself. Considering works like ‘Two Men in Benares,’ Khakhar explicitly depicts a homosexual couple with one of the men obviously resembling the artist himself. Through this painting he highlights certain key emotions such as vulnerability, touch, warmth and pity, which were recurrent themes in this work at this time. 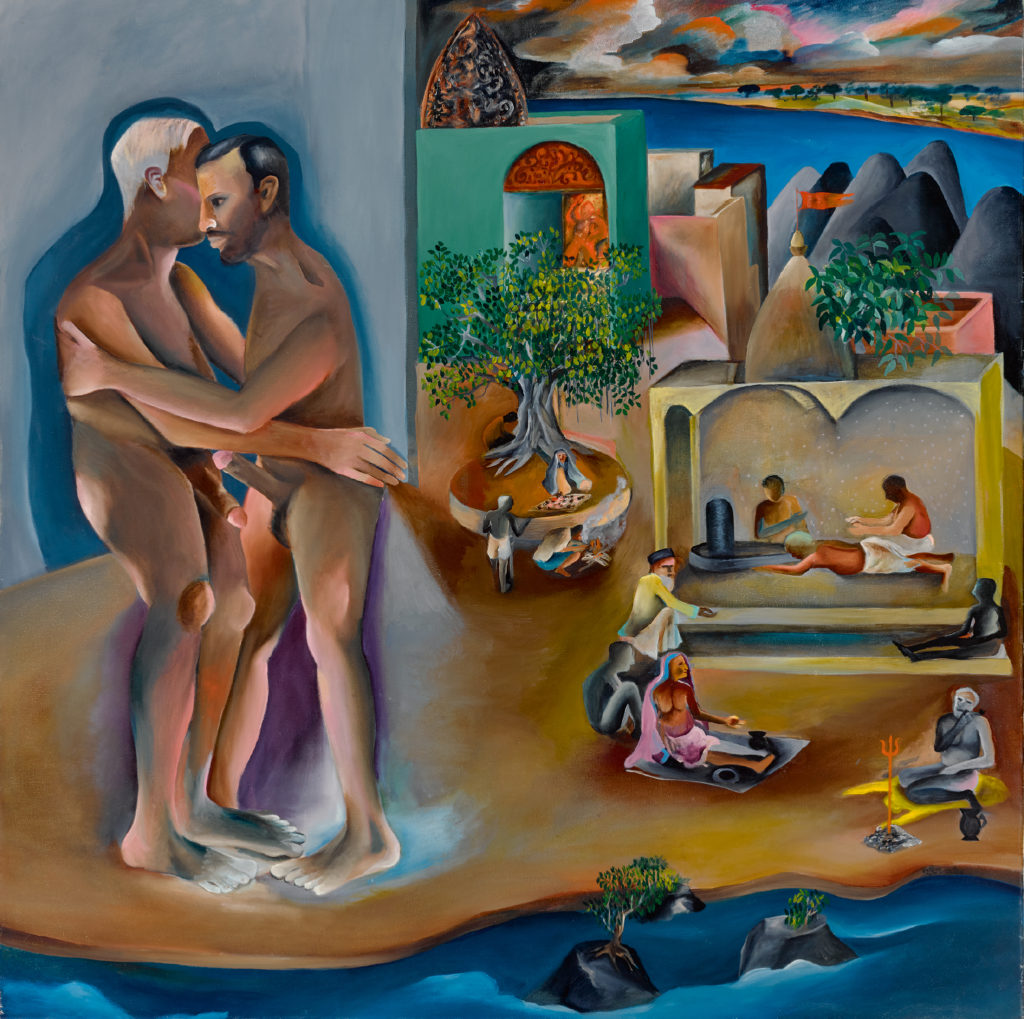 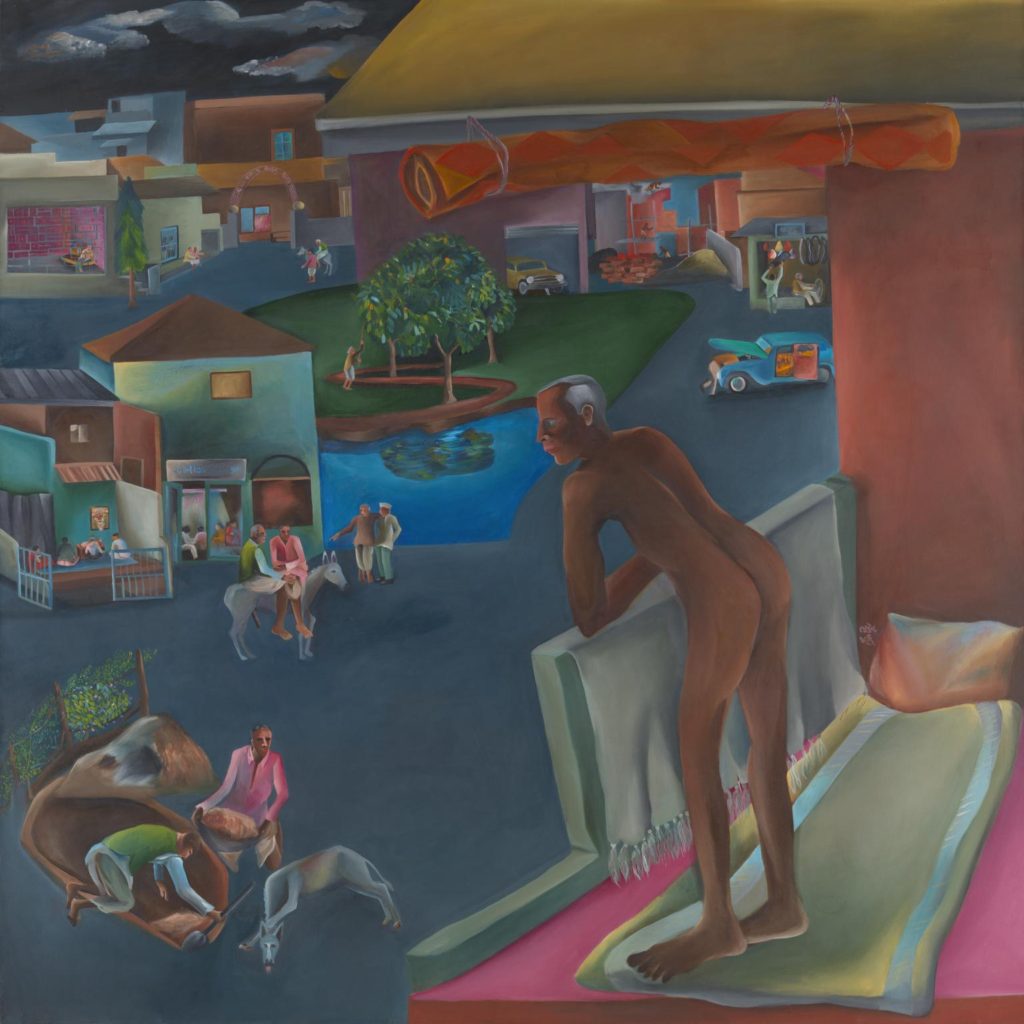 ‘You Can’t Please All, 1981,’ was considered to be his ‘coming out painting,’ according to his contemporary and art critic Timothy Hyman. This painting portrays Khakhar standing on his balcony, nude, watching an ancient Indian tale unravel before him. The tale is of a father and son taking their donkey to the market. They father and son take turns riding the donkey to the market, while passers by judge them on their journey. Some believe that the father is too old to be riding the donkey, while others believe that the father is too heavy and will overload the donkey. The moral of the tale is that “if you try to please all, you will end up pleasing none.” For Khakhar this story is more of a reflection into his own personal-life and his longing to accept his personal identity.

Khakhar was an artist who was undeniably unique to his time. Apart from being forward about his identity, and delineating himself in lustful compositions with other men as his lovers, he also nudged a change in how desirability was viewed in Indian art. Primarily, he deflected the gaze of viewers from women to men. Most of his contemporaries who painted figurative compositions, like FN Souza and KG Subramanyan, idealized the female form. It was Khakhar who stimulated audiences in a new way, by fetishizing and romanticizing the male body. He caused a dramatic shift from the male gaze, an unexplored concept in Indian art at the time.

Later on his works progressed to explore much more somber themes. In the ’90s, Khakhar began painting Keralan landscapes, street food stalls in Tamil Nadu, and religious iconographies from everyday Indian life. The three Bhupen Khakhar paintings in the Sarmaya collection belong to this later period in the artist’s practice. 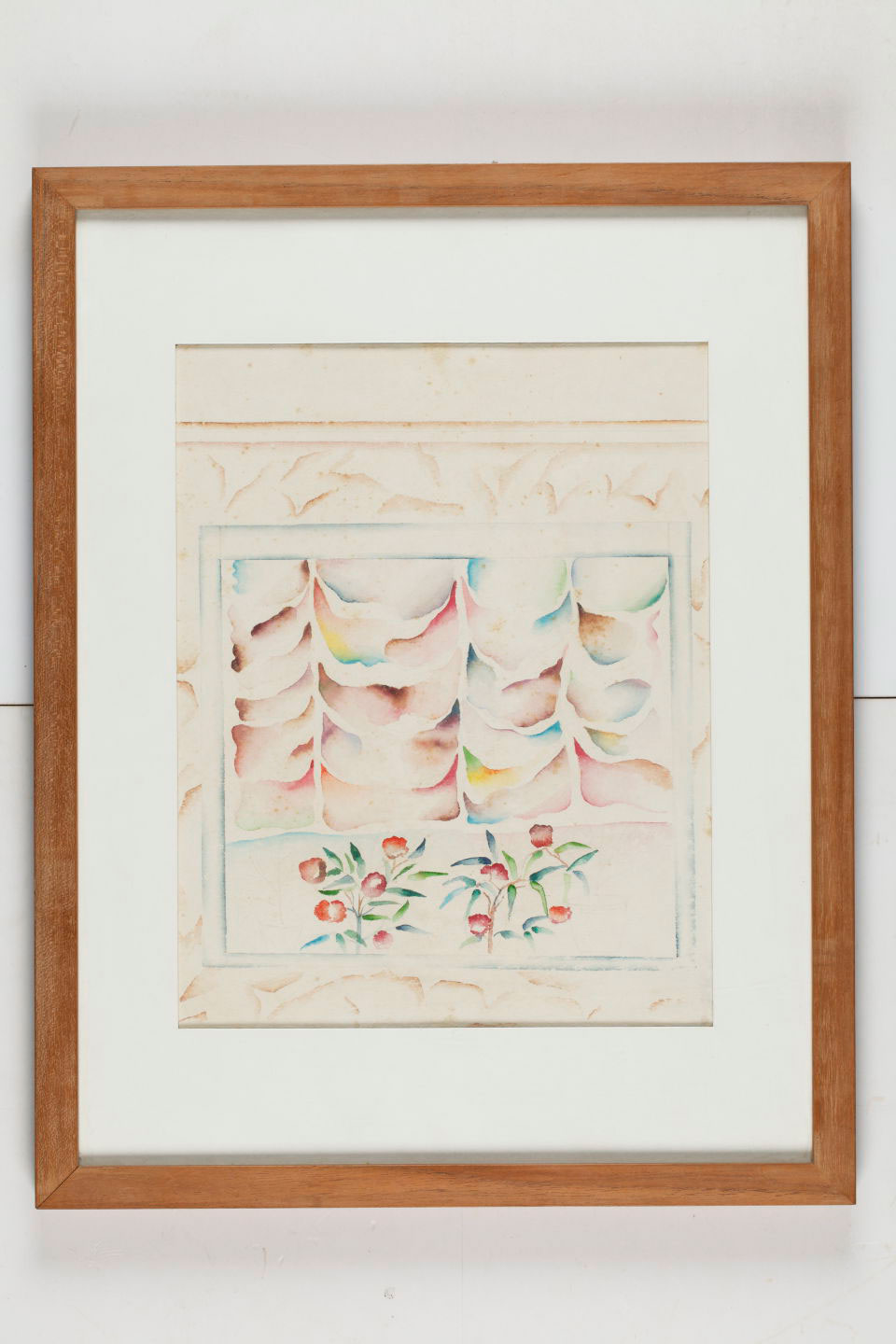 'View from a Window' by Bhupen Khakhar © Sarmaya Arts Foundation

In this painting titled a ‘View from a Window, 1990-1999,’ the viewer is able to observe the whimsical vision that Khakhar tries to put forth. Without giving the viewer too much information, he is able to express a lot. Unlike his initial works, this painting uses very subtle and subdued watercolors to render different forms. There is a brown stonewall on which the window is portrayed, which gives the viewer an insight into the imaginary dream-like world on the outside. It is almost as if the viewer is meant to think that he is on the other side of the painting, on the inside, trying to make sense of the outside world. It seems as though Khakhar is trying to create a dialectic between our understanding of the known and the unknown. Even his later works are evidently derived from a personal space, and are based on experiences that give the viewer a ‘window’ into the tribulations the artist faced in real life. This painting was acquired by Sarmaya from the personal collection of India’s first Pritzker Prize-winning architect, BV Doshi. 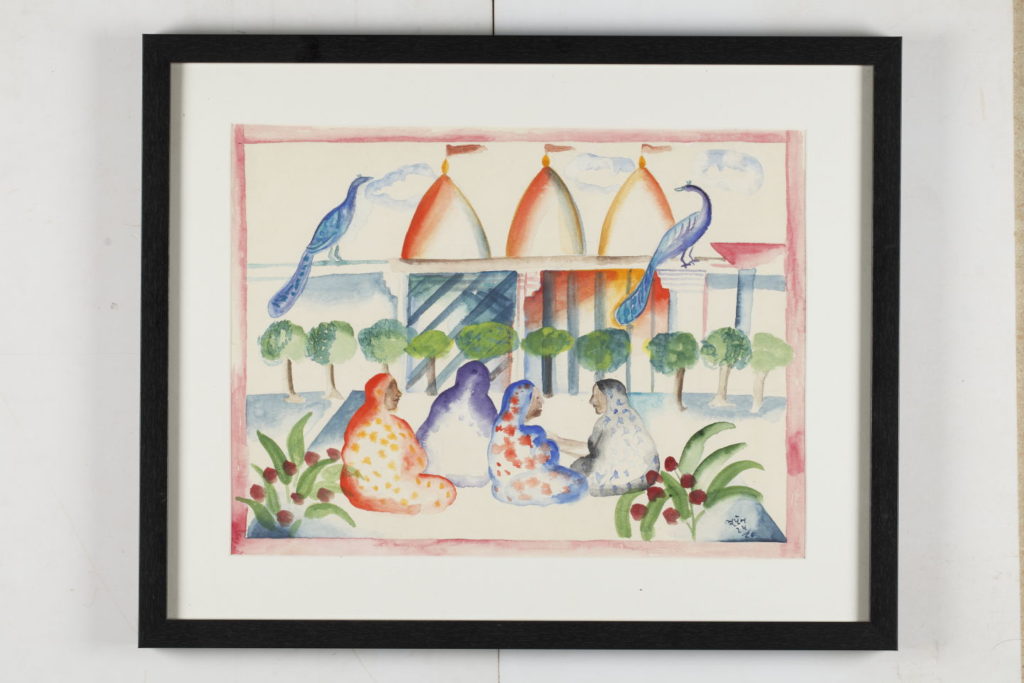 In another painting titled, ‘Temple with Peacocks, 1989,’ there is an inherent playful, unabashed, and spontaneous quality to the work, without much attention paid to detail. In Khakhar’s watercolour compositions the viewer can see a sort of childlike abandon, wherein the forms represented are not perfectly or fully rendered. The painting doesn’t contain any complicated underlying theme, but is instead just a representation of a typical Indian temple scene as it is.

Even in ‘Wall of a Small Hindu Temple, 1966,’ the painting physically represents a temple wall without any symbolic or thematic undertones. It’s an abstract rendition of Khakhar’s version of a Hindu temple wall with collaged elements, abstraction, and lettering – radically different from his more autobiographical compositions.

In an interview with his contemporary and close confidant Gulam Mohammed Sheikh, it is apparent that Khakhar was not defined only by his sexual orientation – he was obviously much more than that. He sought ways of rediscovering and reinventing the human form through his art. Sheikh says, “Bhupen invented his own idiom through his art, and all that he lived came into his art. He sketched every day from life; he drew ordinary people and was interested in showing their lives. He created his own personal idiom, that gave us a new way of looking at life.” The evolution of Khakhar’s journey from a closeted conformer to a fearless modern Indian artist mirrors the progression of his own art towards its true, uninhibited, liberated essence.