As one of the founders of the Progressive Artists' Group and an idealist who was once imprisoned for participating in MK Gandhi’s salt satyagraha, KH Ara seemed to have acquired a somewhat avuncular air in the art scene of ’40s and’50s Bombay. That was rudely challenged when he got into nudes. And he got into nudes in a big way—the word ‘obsessive’ has been used to describe this sudden fascination. But Ara’s nudes came in for a lot of criticism. Compared to those of contemporaries like Souza, these paintings were not sexual, shocking or even very explicit. But there’s a sensuousness to Ara’s work even if the subjects seem guarded in certain places, throwing sidelong looks over a shoulder or hurrying to cover up. Shy and respectful as the artist’s gaze seems, it also captures the spread of the hips, the arch of the back and the gentle swell of the breasts in an intimate, utterly infatuated way that has its own appeal. 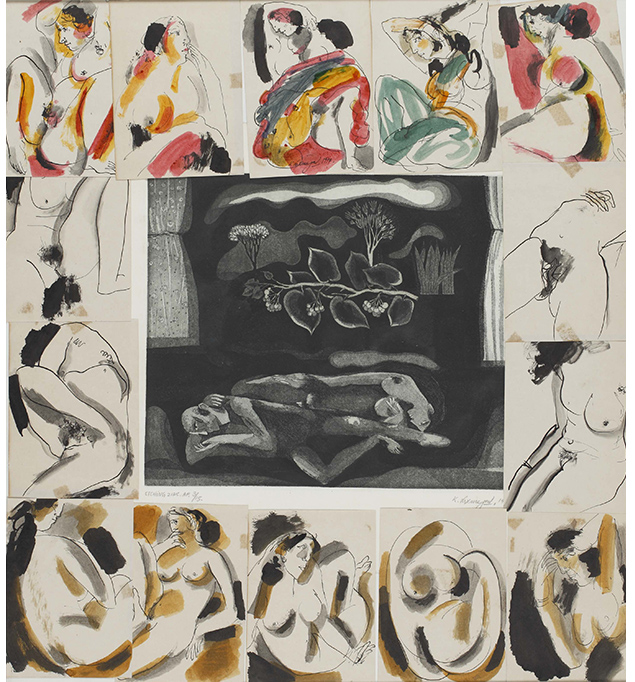 Untitled (Group of Works) by K Laxma Goud, 1974 and 1977, etching on paper; ink on paper; watercolour on paper

Born in rural Andhra Pradesh in 1940, Laxma Goud is a genius at printmaking and an artist comfortable in a variety of media, from gouache and watercolours to metal and clay. Ripe with desire and positively throbbing with sexual energy, Goud’s art pulls you into a lush countryside where every living creature seems to have only one thing on their mind. The group of works in the Sarmaya collection consists of an etching, ink drawing and watercolour painting, all done on paper. This lot was created in 1974 and 1977 and feature small playing card-sized works that show women in various stages of restlessness, stretching, spreading and curling up like a pat of warm dough under a firm hand. In the centre, a man and woman lay naked and entwined, catching their breath. 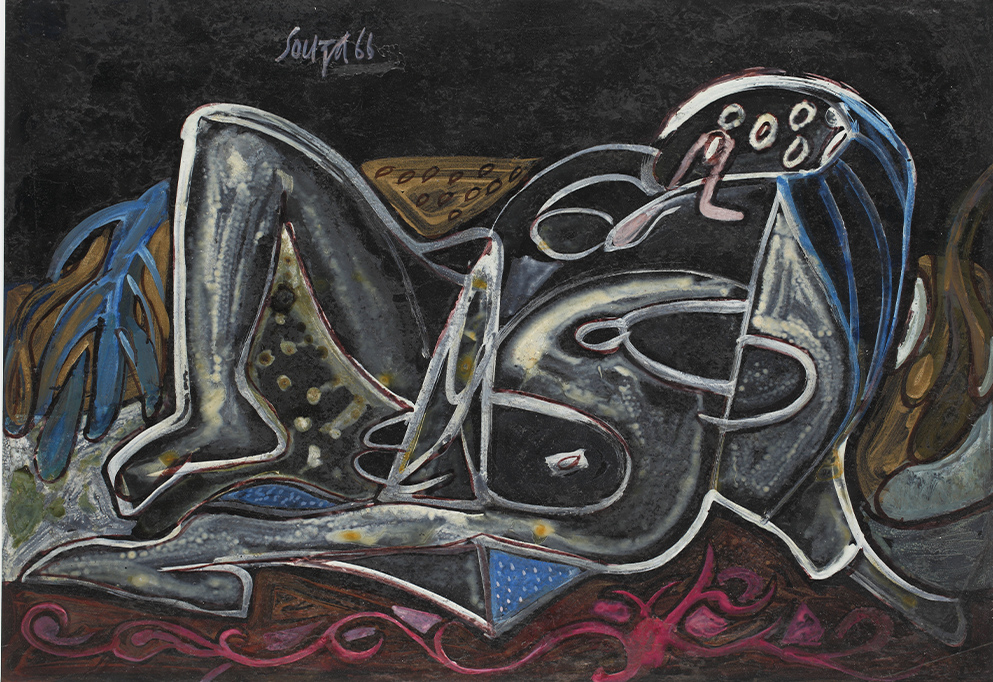 Born in 1924 to a Catholic home and groomed to become a priest, Souza started his real career as a lifelong rebel early on. This strain of radical non-conformity and fearlessness burst forth most provocatively through his paintings, which seem to challenge the viewer to drop all pretense of shock and outrage and engage uninhibitedly with the subject. Souza’s nudes are partly caricatures of a society too quick to take offense. They also expose the artist’s own internal conflicts. In the Untitled work in the Sarmaya collection, a woman seems to be pleasuring herself and while her body seems wracked by the throes of pleasure, her face is a disturbing, featureless void. This is a woman taking control of her own sexuality and boldly seeking fulfilment by herself. But the artist seems to punish her—and tantalise us—by erasing her identity and switching out arousal with revulsion. 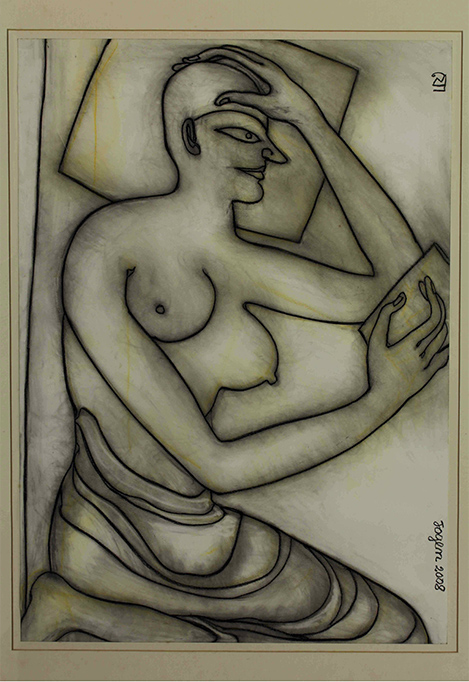 An expressionist painter whose nudes are neither perfect nor posing, Jogen Chowdhury clearly wants to go beyond the merely physical and layer moods and emotions onto his subjects. Chowdhury was born in 1939 in present-day Bangladesh and now lives and works in Santiniketan, outside Kolkata. Most of his paintings are created using ink, watercolours and pastels on canvas. His nudes are interesting for being more emotional and atmospheric than they are physical or sexual. The piece in the Sarmaya collection is a 2008 dry-pastel-on-paper painting titled Love Letter. But for the breasts, there would be no way to identify the gender of the subject. The word shorn rather than nude would be more apt to describe this figure. Like the artist has whittled away all extraneous details, not to mention colours, to present a languid, wistful mood. The kind one might fall into while reading old letters.

The title of this series of charcoal drawings by the young painter and sculptor Dilesh Hazare is Purushartha, the Sanskrit word for ‘the goal of human endeavour’. The four purusharthas are dharma, artha, kama and moksha or righteousness, prosperity, pleasure and liberation. It’s clear which goal the subjects here are engaged in pursuing. Hazare’s nudes are classically beautiful with sculpted, taut muscles and full, rounded breasts, but what makes them interesting are the fluid shapes they seem to take when fused together. The artist uses only gradations of colour to demarcate one body from another—the male is powerful and black, the female is supple and white—and then merges the two forms to create a unit that’s completely immersed in itself and oblivious to the world around.