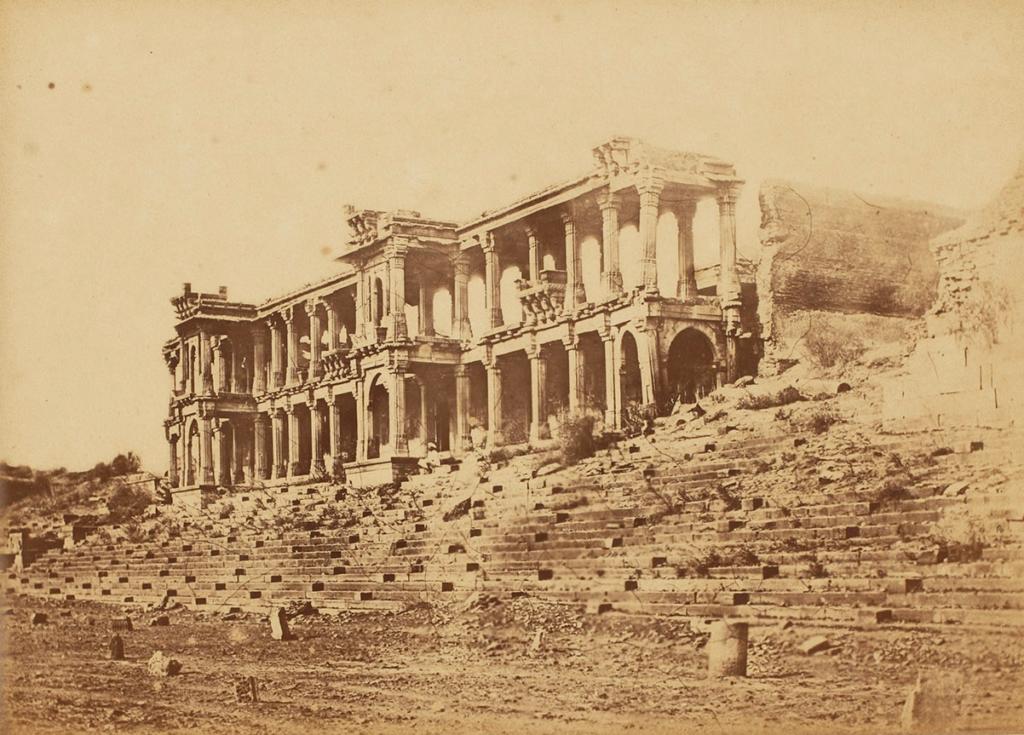 Sarkhej Roza, ruins of the harem from 'Architecture At Ahmedabad, The Capital Of Goozerat 1866' ©️Sarmaya Arts Foundation

When Le Corbusier, the eminent French architect most popularly remembered in India for designing the city of Chandigarh, visited Sarkhej in the 1950s, he remarked to his fellow architect B.V. Doshi, ‘Why do you need to visit the Acropolis in Athens when you have this here?’

From Jyoti Gulati Balachandran’s Narrative Pasts: The Making of a Muslim Community in Gujarat, c. 1400-1650

Corbusier was referring to Sarkhej Roza, which was built to honour the spiritual advisor to the founder of the city of Ahmedabad. Ahmed Shah I built the city that carries his name with the blessings of Sufi saint Shaikh Ahmad Khattu Ganj Bakhsh, whose final resting place lies within the complex of the roza, an Arabic-origin word meaning shrine or tomb. In the 15th century, Sarkhej Roza was an important centre for Sufism on the Indian subcontinent. But it’s architecturally significant too for being one of the early west Indian monuments to fuse Persian principles of building with the Hindu and Jain styles indigenous to the region. Intricately worked jaalis, graceful jharokas, elegant arched doorways and the strict symmetry typical of sacred Islamic architecture are all evident here. Sarkhej Roza was commissioned by one king (Muhammad Shah), completed by another (Ahmed Shah I) and extended by a third (Mahmud Begada) and then a fourth (Muzaffar Shah III). Work on it began in 1445 CE and the final additions were made in 1584 CE, by which time the complex grew to encompass mosques, tombs, a lake, sluice gates, palaces, royal residences, pavilions and a garden. Each successive addition represented a different era in the evolution of the patrons, the ambitious and influential kings of the Gujarat Sultanate. 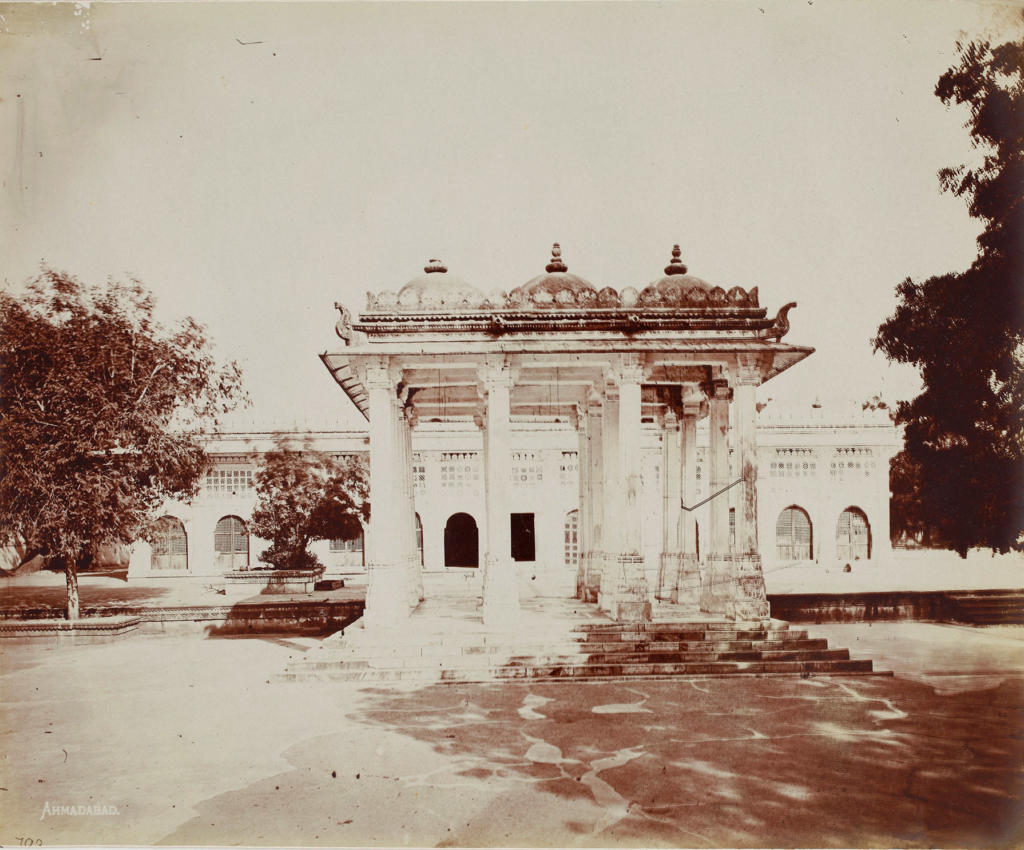 Supply sluice of the tank at Sarkhej Roza from 'Architecture at Ahmedabad, the capital of Goozerat' 1866 ©️Sarmaya Arts Foundation

The Muzaffarids, as they are also known, were a dynasty founded by Zafar Khan Muzaffar, who served as the governor of Gujarat under the Delhi Sultanate. He made a strike for independence after 1398 when the Turko-Mongol conqueror Timur attacked and destabilised the seat of power in Delhi. The Gujarat Sultanate was established in 1407 and enjoyed a century and a half of power and prosperity before the kingdom was annexed by Akbar and the Mughal empire in the late 16th century. While they ruled, the Sultans of Gujarat built a lasting cultural legacy that lives on most tangibly through their architecture. The incredible mosques, tombs, palaces and shrines they left behind in places like Ahmedabad, Cambay, Patan and Champaner, give us hints to their personalities, aesthetics and spiritual yearnings. 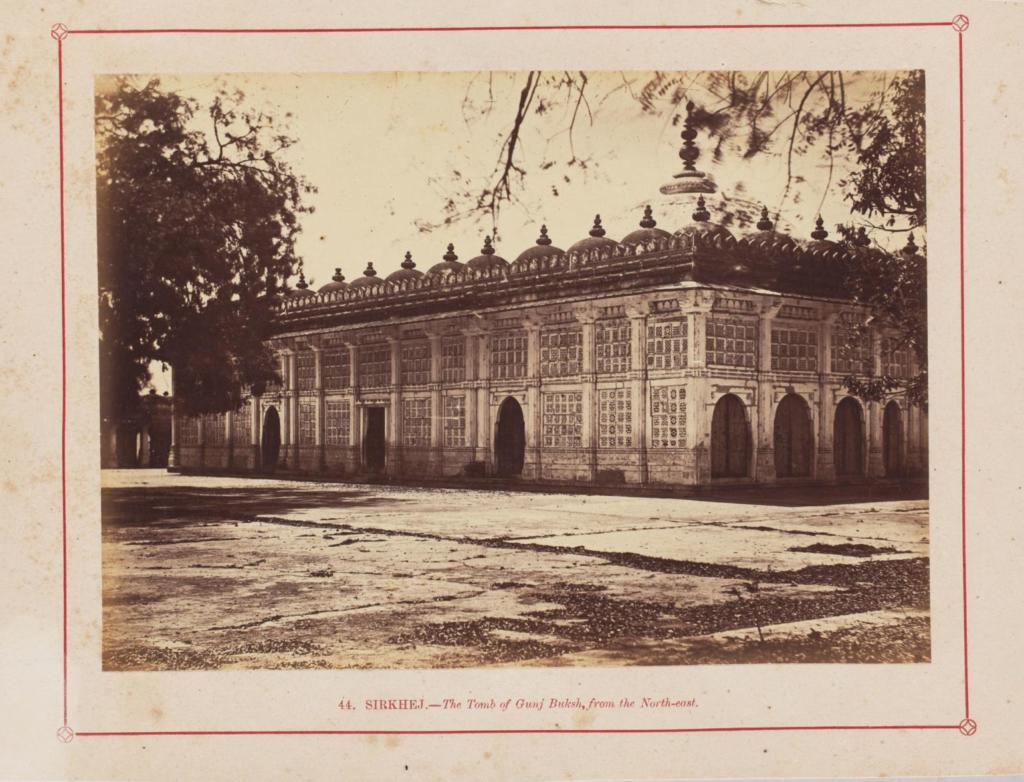 Most of the images you see here were made in the 19th century and are part of an album from Sarmaya’s collection of rare photographs. Titled Architecture at Ahmedabad, the capital of Goozerat, the album contains original photographs by Colonel Biggs and James Fergusson and was published in 1866. Many of these monuments have been altered, restored or even obliterated in the 155 years since these photos were taken. But they represent two important eras in the architecture of the Gujarat Sultanate. The reign from 1411 to 1442 of Ahmed Shah I, who founded Ahmedabad and contributed such gems to the city as the Jama Masjid and the Sarkhej Roza, both of which still stand today. And the reign from 1458 to 1511 of Mahmud Shah aka Mahmud Begada, whose military conquests were matched by his architectural vision, to which his capital city of Champaner was a beautiful testament. 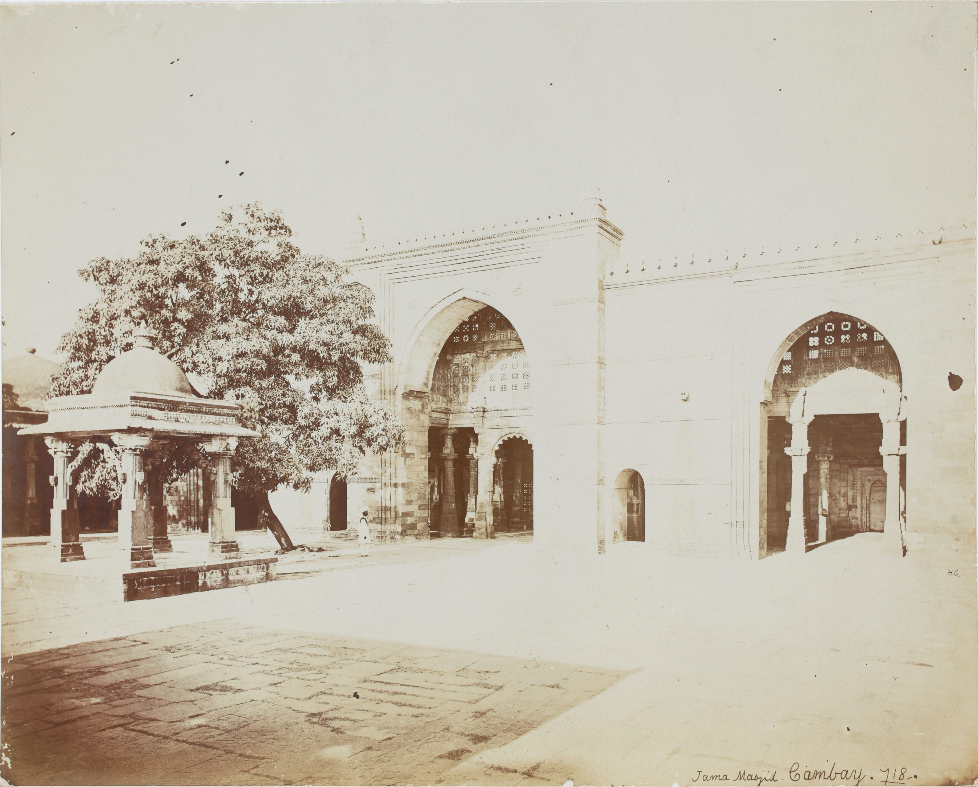 Gujarat had a marvellous indigenous tradition of architecture patronised by the Chalukya kings and known as the Solanki style. Hindu and Jain temples were built in the grandest version of that school of design, adorned with minutely wrought carvings, decorative pillars and flying arches. Echoes and reflections of the Solanki style are evident in the early architecture of the Gujarat Sultanate. Very early Islamic monuments in Gujarat like the Jami Masjid in Cambay were made from pillars and building material repurposed from other religious structures including temples. During the reign of Ahmed Shah I, a more collaborative practice emerged that fused the Persian/Arabic aesthetic with the skill of the local craftspeople and artists to create some early drafts of the Indo-Islamic style made so popular later by the Mughals. 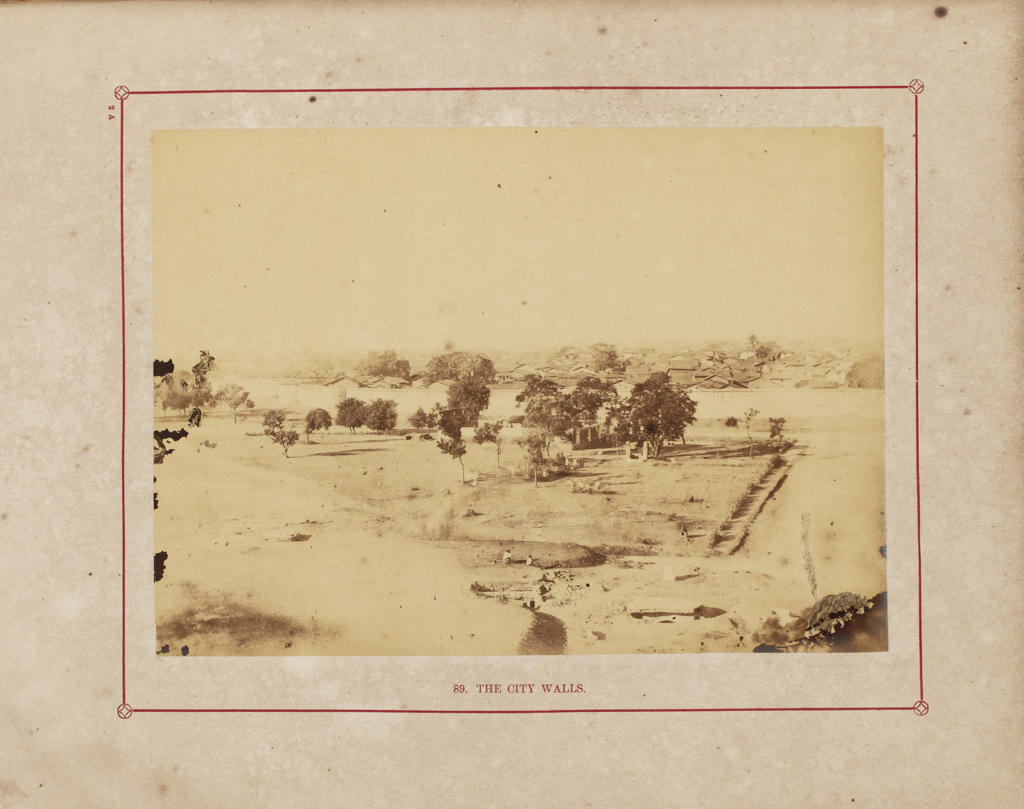 Ahmed Shah I laid the foundation to the city of Ahmedabad on the banks of the Sabarmati in 1411. The walled city is home to some of his most celebrated monuments, the most famous of which is the Jama Masjid. Built in 1424 CE, the Jama Masjid is an impressive specimen of the syncretic Gujarat style with its enormous pillared prayer hall, lotus-shaped domes and carvings of Islamic calligraphy. 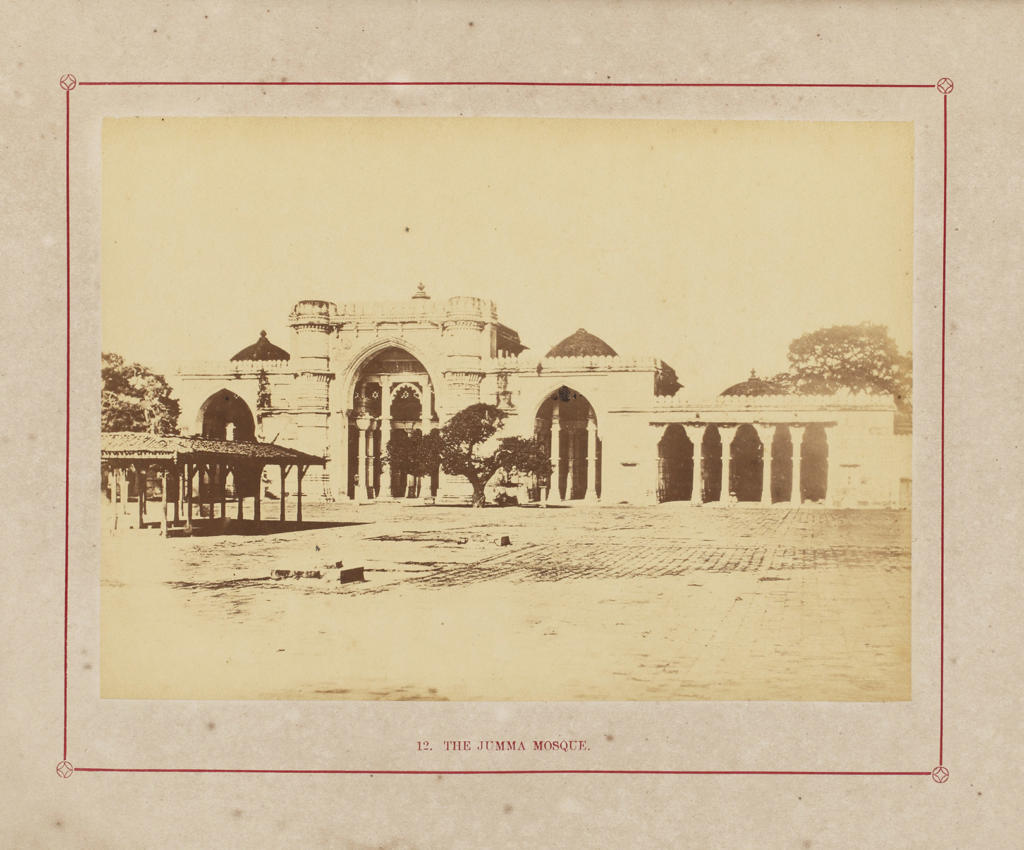 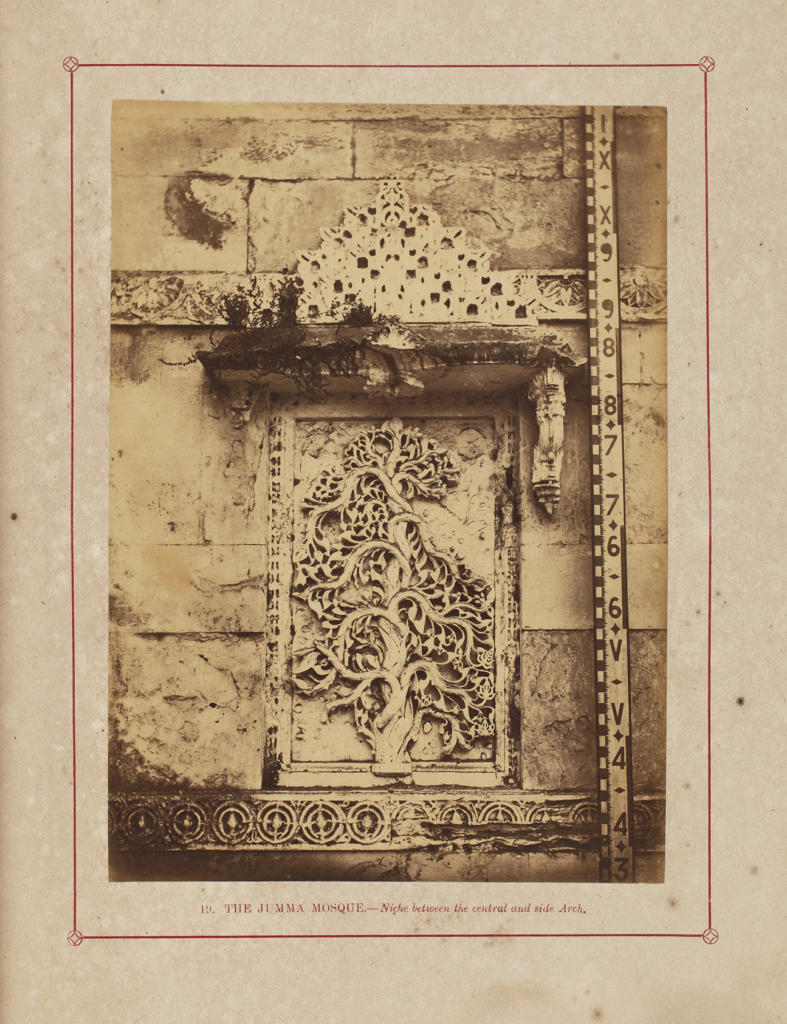 Ahmed Shah’s walled city was dotted with smaller mosques and planned with neatly demarcated neighbourhoods and main streets. Many of the original structures were built of timbre. Today, the walled city of Old Ahmedabad is a historical precinct recognised as a UNESCO World Heritage City.

SLIDESHOW: Monuments commissioned by or built during the reign of Sultan Ahmed Shah I (1411 to 1442)

The most swash-buckling of an already impressive clan of men, Mahmud Shah earned the title of ‘Beghada’ for conquering two ‘gadhs’ or forts renowned for their impregnability: Junagadh and Pavagadh in Champaner. He established his capital in Champaner after seizing the fort and started work on the stupendous Jama Masjid here in 1513. 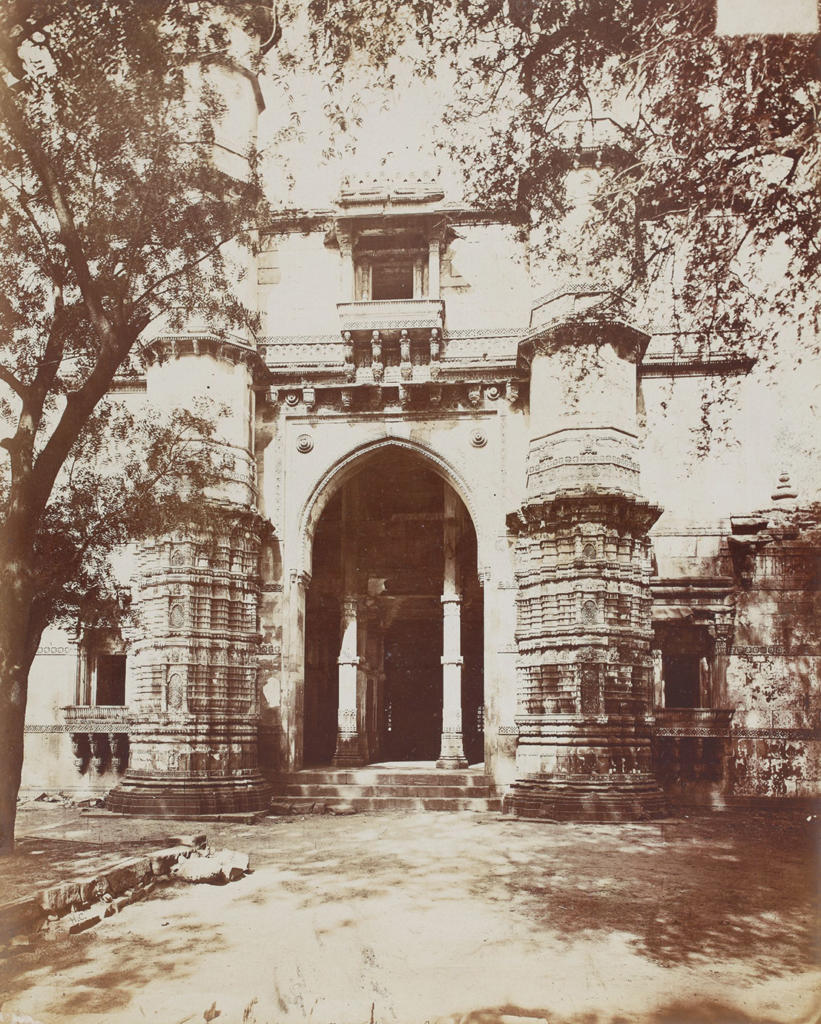 Central portion of the east façade of the Jami Masjid, Champaner, from 'Views of Ahmadabad and Gujarat' 1861 ©️Sarmaya Arts Foundation 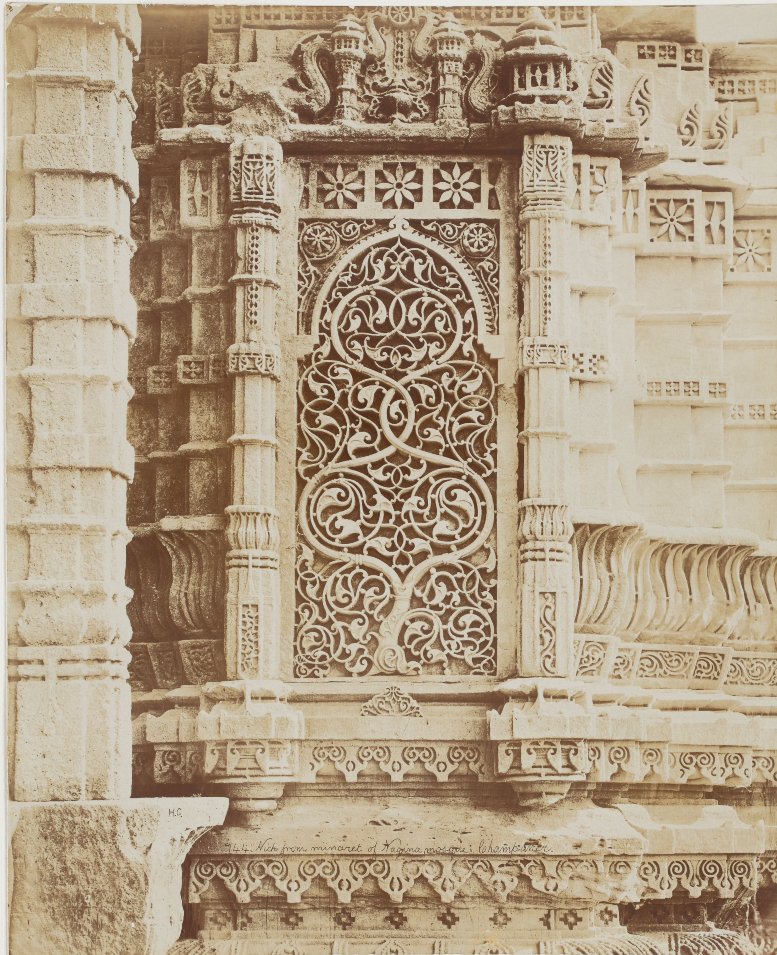 Elegant minarets, lace-like jaalis of stone, hundreds of carved pillars, a magnificent central dome and Jain-inspired motifs of the Kalpavriksha or Tree of Life—all draw immediate comparisons with iconic monuments that came later, whether they were lavish Mughal tombs or the latticework at Siddi Saiyyad Mosque in Ahmedabad (1572). 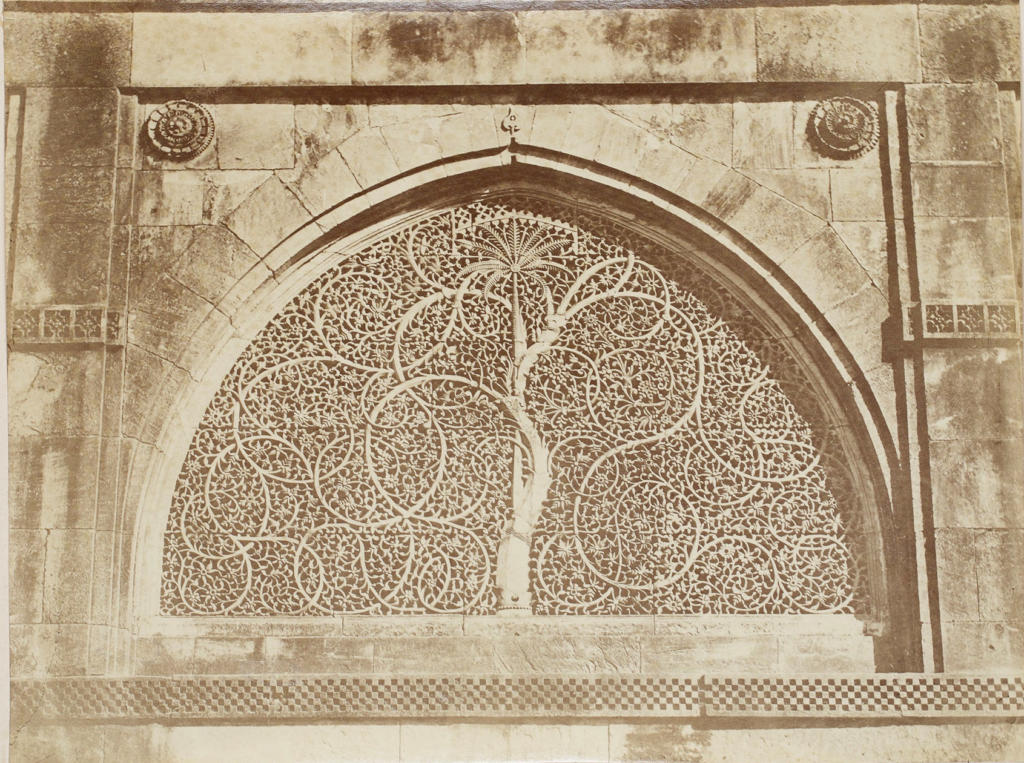 It is widely accepted that the syncretic architecture evolved during the Gujarat Sultanate reached its peak under the reign of Mahmud Beghada. Even monuments not commissioned by him, like the mosque of his Hindu wife Rani Sipri or that of his governor Muhafiz Khan, show great sophistication and style despite their modest stature. 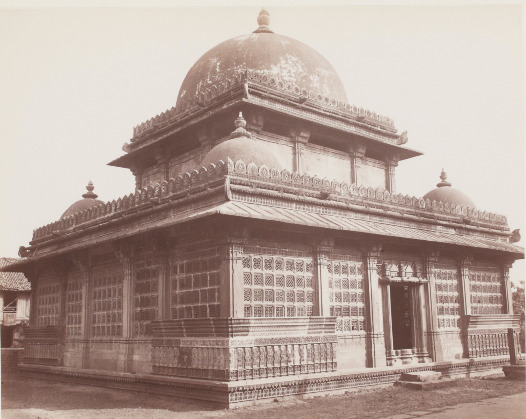 Built in 1514, the Mosque of Rani Sipri was dubbed the Gem of Ahmedabad ©️Sarmaya Arts Foundation

The Gujarat Sultanate survived the death of Beghada in 1511 and held power for a few more decades but it never again rose to the level of eminence it saw under him.

SLIDESHOW: Monuments commissioned by or built during the reign of Sultan Mahmud Beghada (1458 to 1511)

As the sun set on the Muzaffarids in 1573, it shone bright on the Mughals who were well on their way under Akbar to conquering most of the Subcontinent. But despite being a provincial dynasty that ruled for less than two centuries, the Gujarat Sultans left an indelible mark on our culture that travelled well beyond the borders of their kingdom in the west. According to scholar and expert on Mughal art and architecture Ebba Koch, as quoted in DNA, “Gujarat played an important part in the foundation period of Mughal architecture which drew from diverse sources that which was most suitable for a monumental sandstone-oriented building programme. Gujarati tradition presented a model for successful adaptation of pre-Islamic Hindu and Jain architecture to requirements of Muslim architecture.”