Whether we’re getting the bird’s eye view of Shahjahanabad through the canvas of Mazhar Ali Khan, listening to Khushwant Singh spin fantastical tales in his inimitable style or just letting the nostalgic prose of Ahmed Ali pour over us, we can’t think of a better way to experience Delhi in all its moods than through its most innovative storytellers and historians. You don’t have to love the city to enjoy these books. Anyone susceptible to art, beauty and romance will find themselves sighing as they turn the pages.

City of Djinns by William Dalrymple 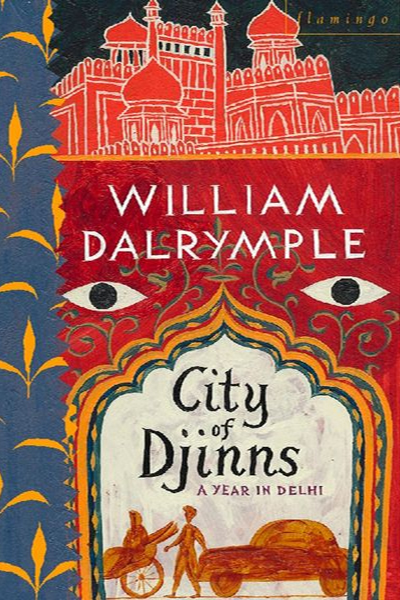 City of Djinns was historian William Dalrymple’s second book and it was written during a short stay in the city accompanied by his wife Olivia Fraser, whose intricate illustrations make his accounts come alive. The title of the book refers to ‘spirits’ who are believed to have been residents of the city for centuries, protecting Delhi against all perils and helping her rebuild herself every time she falls prey to marauding armies.

From the dilapidated buildings of Chandni Chowk to the new commercial hubs of Connaught Place, Dalrymple takes us on a journey through the city with him, trying to unravel the history of the seven cities, absorbing the madness and the diversity of the eighth one, New Delhi, and understanding the mysterious ways in which these co-exist.

By celebrating festivals that hark back to the time of Bahadur Shah Zafar, meeting an old matriarch who claims to be a Mughal shehzaadi, participating in kabootar-baazi on the steps of the Jama Masjid, and speaking to Anglo-Indians who feel like they never belonged, the author takes us back in time to a Delhi that was.

Delhi: A Novel by Khushwant Singh 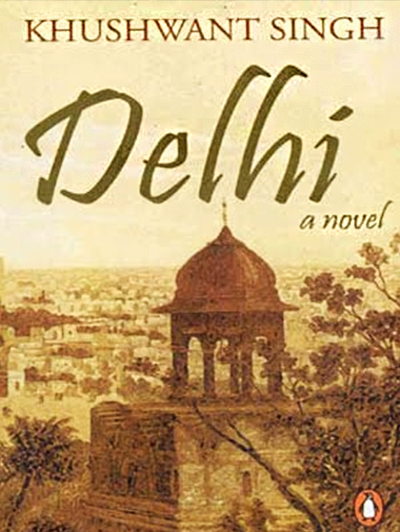 While Dalrymple’s account is that of a traveller, temporarily stationed in the city, Khushwant Singh is an insider and a ‘dilliwallah’ through and through.

“I return to Delhi as I return to my mistress Bhagmati when I have had my fill of whoring in foreign lands”. Thus begins Khushwant Singh’s account, which takes the reader on a journey of re-discovery through the city he loves. The account is full of historical facts, first-hand stories and myriad anecdotes—all strung together somehow by the love story of the author and his eunuch Bhagmati in modern-day Delhi.

Spanning 600-years, moving back and forth between time and space, one meets all kinds of people in this book—poets and princes, sultans and saints, masons and mistresses—each a raconteur, each an equal participant in the creation of the many layers of this city. A must-read for anyone who loves a quintessential Khushwant: sarcastic, funny and yet extremely gripping and real.

Twilight in Delhi by Ahmed Ali 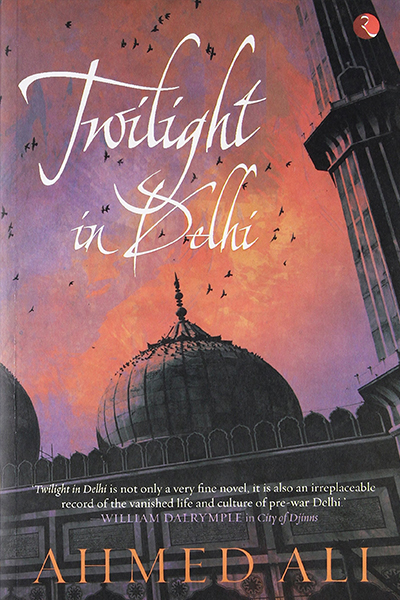 Set in the years of 1911-1912, in the backdrop of the colonial era, Twilight in Delhi elaborates on the changing socio-political conditions as seen through the eyes of the protagonist Mir Nihal and the denizens of his beloved Delhi. Praised by William Dalrymple in his Djinns as a must-read for anyone trying to understand 19th-century Delhi, this one is a classic.

The vivid writing brings to life the sights, smells and sounds of the old cityas one takes a stroll through the bazaar, from the flutter of the pigeons’ wings to the smell of freshly brewed tea sipped in kulhads, and even the rot collecting in the gutters and sewers .

There are snippets from the daily life of the family in focus, which are some of the most fascinating sections and give the reader a vivid picture of that period in history. For example, almost an entire chapter is dedicated to describing how a regular day in the city unfolds – from the break of dawn when the azaan in the Masjid-e-Juma delivers its wake-up call, the men go to work and the women spend their days working and chatting in their closed zenanas, to afternoon siestas when the wind is hot and the homes are silent, to nightfall, which lights up the streets, fires up the kebab grills in the roadside stalls and livens up the brothels of Chawri Bazaar filled with haggling prostitutes and demanding clients.

More than the plot, one should read this book for a peek into an entire culture and a way of life long lost. Additionally, couplets of Ghalib, Zouk and Mir are liberally strewn across the book. Although the feel of Urdu originals is somewhat lost in the English translations, they nevertheless lend a poetic quality to the entire narrative. 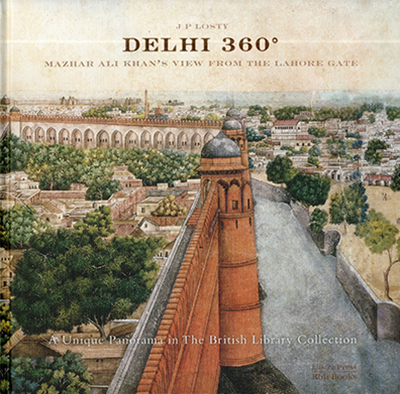 In 1846, Delhi painter Mazhar Ali Khan painted a five-foot panoramic view of Shahjahanabad, sitting atop one of the turrets of the Qila-e-Mubarak. In 2011, J.P. Losty studied this exceptional work now stored at the British Library and published a book. An entire title dedicated to one single painting!

Not only is this painting considered one of the finest artistic renderings of the city, but it is also an invaluable historical record of the cityscape and the Qila-e-Mubarak before the mass-scale destruction that followed the Uprising of 1857.

This book studies the painting and translations of the Persian and Urdu inscriptions that accompany it. Through a collection of essays, the book contextualises the painting within both historical and artistic frameworks and brings to life a Delhi before 1857.

I especially adore this publication for the image reproductions and the ease with which one can view intricate details. One of the highlights is definitely the section on the chatta bazaar. The chatta bazaar was a special market open only on selected days for the imperial women, and is located between the Lahore Gate and the Naqaar Khana of the Qila. It was built in the style of double-storeyed market lanes that Shah Jahan saw in Persia and included a two-storeyed arched passageway. The ground floor housed shops selling exquisite jewellery, semi-precious stones and textiles, while the top floor housed the residences of the merchant.

Mazhar Ali Khan’s painting reveals a detail of the bazaar roof, which was once covered with intricate floral and geometric paintings. Today, the place still functions as a market where cheap replicas and so-called Indian souvenirs are sold to gullible tourists. However, the roof was whitewashed at some point and the following additions of lime plaster year after year have completely buried these exquisite paintings. It was only through this book that I could get a glimpse of this wonderful bit of lost history. Fortunately in October 2017, the ASI began a restoration project at this historic market and under their efforts, layers of the original paintings are slowly emerging.

Delhi: Adventures in a Megacity by Sam Miller 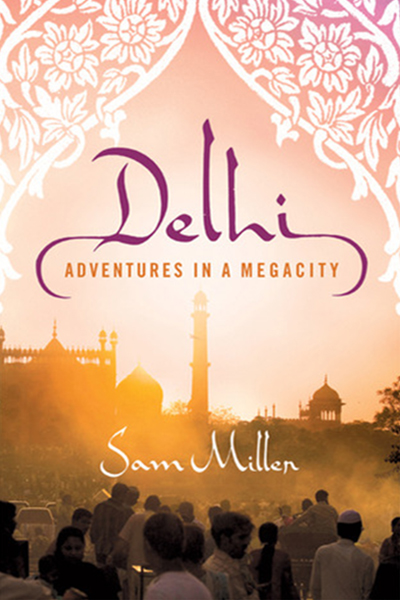 This book deals with a facet of Delhi that most authors ignore, the here and now. Inspired by the idea of ancient Islamic cities being built in circles, Miller creates a route of the city that spirals out in concentric circles from Connaught Place and explores stories as it goes.

Each chapter begins with a hand-drawn map, and is further supported by photographs also taken by the author. Miller goes on a grand adventure through the nooks and crannies of the megapolis, mostly on foot. He writes in a first-hand account about areas like Rohini, Nehru Place and Gurgaon, and the experiences he shares with the people he meets on the way. This book offers a sort of cross-section of the city, with liberal sprinklings of quirk, humour and sarcasm.

Adventures in a Megacity is appealing because it aims to look at the city in the present day—what it has become, and where it is going. Miller makes an attempt to understand the very essence of Delhi in the 21st century. His talent is for finding wonder in the mundane, documenting the undocumented and  nurturing a constant curiosity for the everyday trials and tribulations of his adopted city. 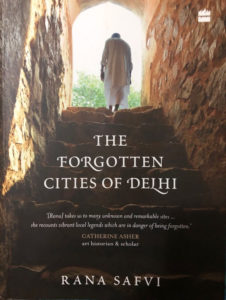