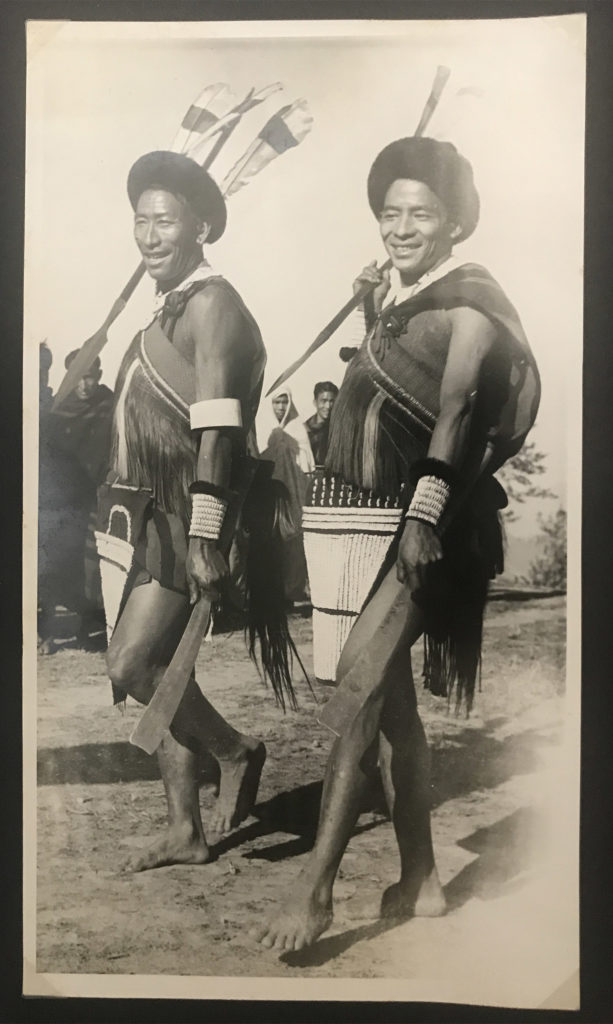 Members of the Sumi tribe at Tuluni, 1948

We started with only a handful of black-and-white photographs from a photo album that Sarmaya acquired from the collection of the late BG Verghese, former editor of the Hindustan Times in the early Seventies. There were no identifying labels, just a small envelope held loosely inside the album with a light inscription that read ‘Tuensang Village’. The images showed large groups of men and women decked out in splendorous costume and jewellery, congregated in ritual, dance and procession, indicating that these were made during some festival or celebration. Thanks to a quick Google search we were able to locate the village located within a district of the same name in eastern Nagaland and bordering Myanmar. We then enlisted the help of Phejin Konyak, a Sarmaya Talks speaker and author of The Last of the Tattooed Headhunters: The Konyaks, a book that beautifully documents the culture of her own tribe through personal stories. As a researcher, Konyak was able to reliably help identify members of the Sumi tribe in some of the photos. She also said the people in the photos appear to be celebrating the Tuluni festival. 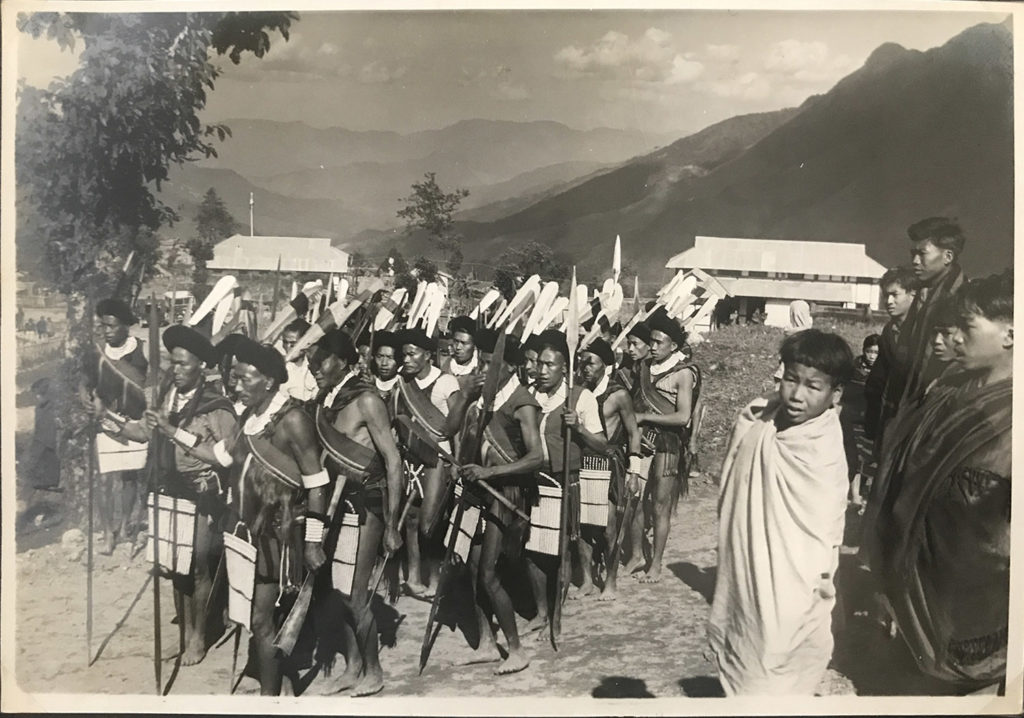 In order to get an insider’s perspective, we reached out to Lovi Sumi, an entrepreneur, ‘modern Naga’ and  proud member of the Sumi tribe. Having lived outside the state for most of her adult life, Sumi has now returned to Nagaland and is in the process of setting up an agri-tech business in her home state with the mission of getting young people interested in staying. She says, “There’s a huge migration problem (in Nagaland) because people prefer undertaking menial jobs in cities instead of working with the land. I want to reorganise the agriculture industry here into something that the younger community can get involved with.”

One look at our photographs and Sumi was able to confirm that some of the subjects were, indeed, of the Sumi tribe celebrating the Tuluni festival. There was, however, another exciting revelation: a few of the of the photos show other tribes (currently unidentified) that she suspects were photographed during the same celebrations at Tuensang village. “It’s not uncommon for different tribes to congregate at a single festival in Nagaland. Take the Hornbill festival, where 16 Naga tribes come together to honour their culture, food and music.”

Their distinctive style in costume and jewellery set the Sumis apart in these pictures. The men typically wear a circular cap made of goat’s hair and often adorned with hornbill feathers. They usually drape a red shawl around their upper torso and over one shoulder. Their lower body is covered in an apron decorated with cowrie shells and goat hair. As a nod to their headhunter roots, they hold a spear in one hand and a dao, a kind of sword, in the other. Women (not pictured here) typically wear headgear made of cane and goat’s hair. They drape a mekhala or rectangular piece of cloth in the form of a skirt around their lower bodies, kept in place with the help of a beaded girdle. These are typically worn with blouses. 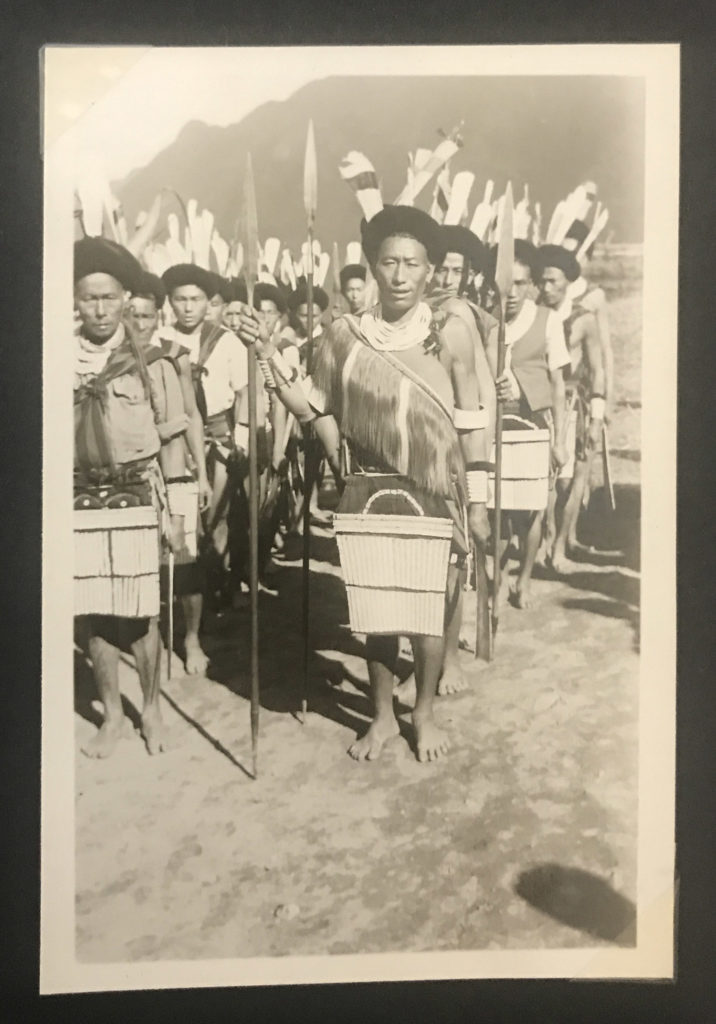 The Sumis are one of the major tribes in Nagaland and are recognised among India’s scheduled tribes. Geographically, they are spread across central and southern regions of Nagaland and some parts of Assam. Like other Naga tribes, the Sumis were headhunters and animists, meaning they worship nature. After the arrival of Baptist missionaries in the 20th century, the Sumis became predominantly Christian; very few of them continue to practice animism. Sumi says, “Our tribe is called Sema in English— a name bestowed upon us at the time of the Raj. We gave into what was called modern thinking at the time and seldom referred to ourselves as Sumis. It’s only now that we are getting back to our roots.” Anthropological study of the Sumis is documented in the book The Sema Nagas by JH Hutton, a professor of social anthropology at the University of Cambridge. The Sumis celebrate two big festivals annually: Tuluni, in July to mark the completion of the farming season, and Ahuna, a harvest festival celebrated in November.

It’s not for nothing that Nagaland is called the Land of Festivals—its robust calendar boasts at least one major festival every month. Tuluni starts on 8th July after a successful sowing season and is celebrated over the next seven days. One of the main rituals of the festival and the reason for its name is the offering of homemade rice beer called Tuluni to Litsaba, the deity who protects crops and ensures a good harvest. The rice beer is also enjoyed by people in goblets made out of bamboo or plantain leaves. The festival is also known by the name Anni, which means ‘a period of plenteous harvests’. A pig is slaughtered in preparation of the feast and there’s plenty of singing, dancing and rejoicing. Songs are sung, dances are staged and several sporting contests are held. Championships of Kiti-do, a traditional form of martial arts nearly two centuries old, are the most important. It’s customary to offer gifts and food to the poor as part of the celebrations. The Sumis also consider it auspicious to arrange the marriage of young couples at the time of the Tuluni festival.

When asked how the festival has modernised over time Sumi is quick to point out that, as a matter of fact, it hasn’t: “We take our festivals very seriously in Nagaland as they help keep our heritage alive. Nagas have conducted these rituals and celebrations in the exact same way from the time these tribes came into existence.”