To the layperson, the Christian symbol of the cross registers as a single homogenous design. A vertical bar crossed with a shorter horizontal one close to its top, sometimes carrying the figure of Christ nailed. But most of us are only exposed to one point of view. Each major culture has interpreted this tangible sign of Jesus’s suffering in a way that aligns with its ideology and artistic sensibilities. For instance, in many churches in south India, you’ll find the St Thomas Cross. It’s inspired by the Jewish menorah and the four ends look like they’re bursting into flower. Further, they don’t carry the body of Christ, preferring to see the cross as a symbol of hope and joy at his resurrection, rather than sorrow at his crucifixion. Sarmaya’s collection of crosses from all over the world is just a small sampling of the universe of Christian interpretations out there. 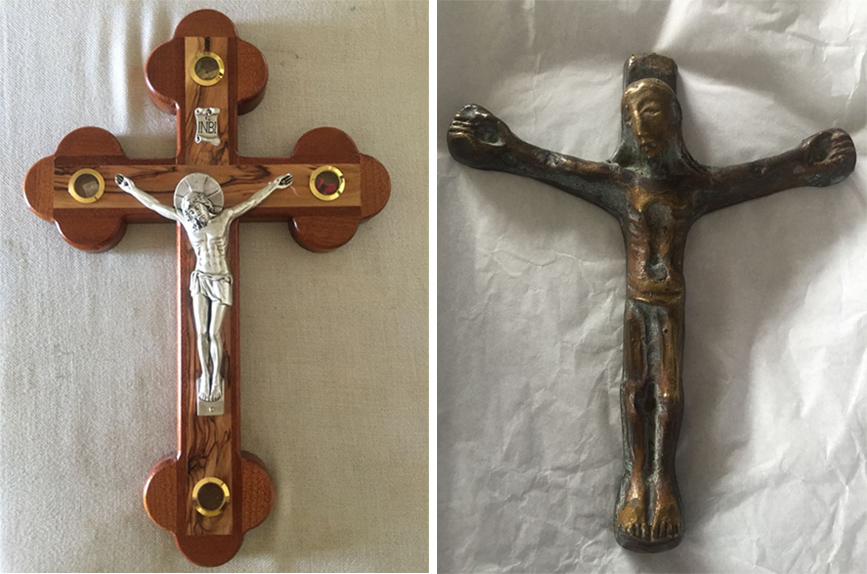 Crosses from Jerusalem and Switzerland in the Orthodox style

There is a huge spectrum of choices here—two bars or three, three nails or four, Christ suffering or smiling—and each represents a different school of thought. Many Orthodox churches believe four nails were used in the crucifixion and their crosses represent the feet of Christ separated and nailed, rather than crossed.

Ancient Byzantine-era crosses were typically made of metal (sometimes precious metals set with gemstones) and this design is still used in Greek Orthodox churches. The Kerala one above has wood inlaid in metal. Some are designed to be ‘blessing crosses’ used by the priest to offer benedictions to the congregation.

Crosses from Russia, France and Spain

Alongside the figure of Christ, you’ll sometimes find an entire tableau laid out within the outlines of a cross. Usually, it will illustrate key moments from Jesus’s life, like the Last Supper or the Resurrection. But sometimes, as in the case of the Spanish cross above, the artist might also draw from more local, everyday scenes. 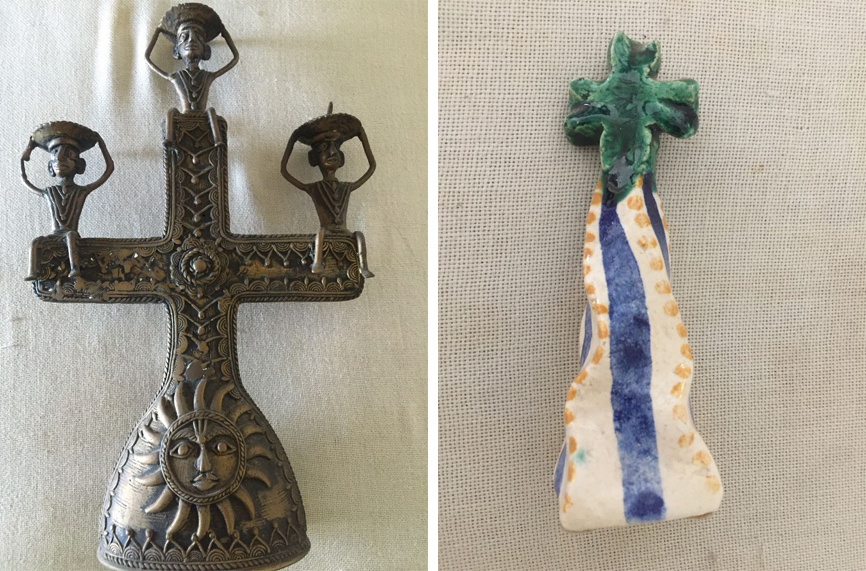 Cross from Chhattisgarh and Spain

Finally, artists everywhere find endless inspiration in the physical form of the cross. They use it as a blank canvas to display their craftsmanship, as in the case of the metal cross from Chhattisgarh above, or imbue it with the essence of their own colourful personality, like the Spanish artist Gaudi has done.