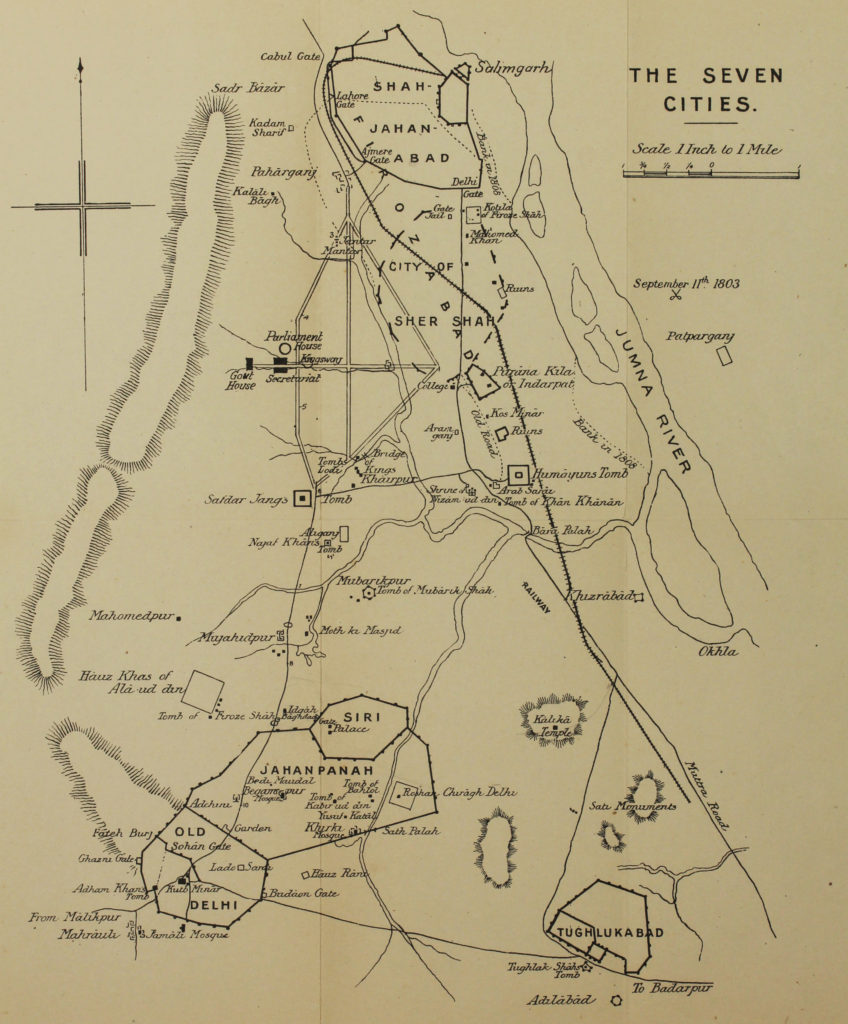 The Seven Cities of Delhi, from Sarmaya’s collection of maps

Delhi is one of the oldest continuously inhabited cities in the world. Starting from prehistoric times, many civilisations have put down roots in its fertile soil and none have been completely uprooted. The result is a lush forest of ancient and hybrid cultures that finds expression most evocatively in the architecture of the city. Among the major influences, three are writ large on Delhi’s skyline, which speaks of the soaring ambitions of the Sultanate rulers; the sprawling grandeur of the Mughals; and the spare elegance of the British empire.

With photographs and engravings from the Sarmaya collection, we present glimpses of a long-ago Delhi. Some of these monuments and landscapes still retain their regal splendour, some have been smudged into anonymity with the passage of time, and other vistas have been lost forever.

The first sultan of Delhi, Qutab-ud-Din-Aibak, started construction on the 239-foot Qutb Minar, the highest brick minaret in the world. But there’s more to the Qutb complex than its tallest attraction; there’s the intricately crafted Alai Darwaza and the haunting ruins of the Quwwat-ul-Islam mosque. Architecture from the Delhi Sultanate also boasts magnificent tombs and mausoleums, like Nizamuddin Dargah. 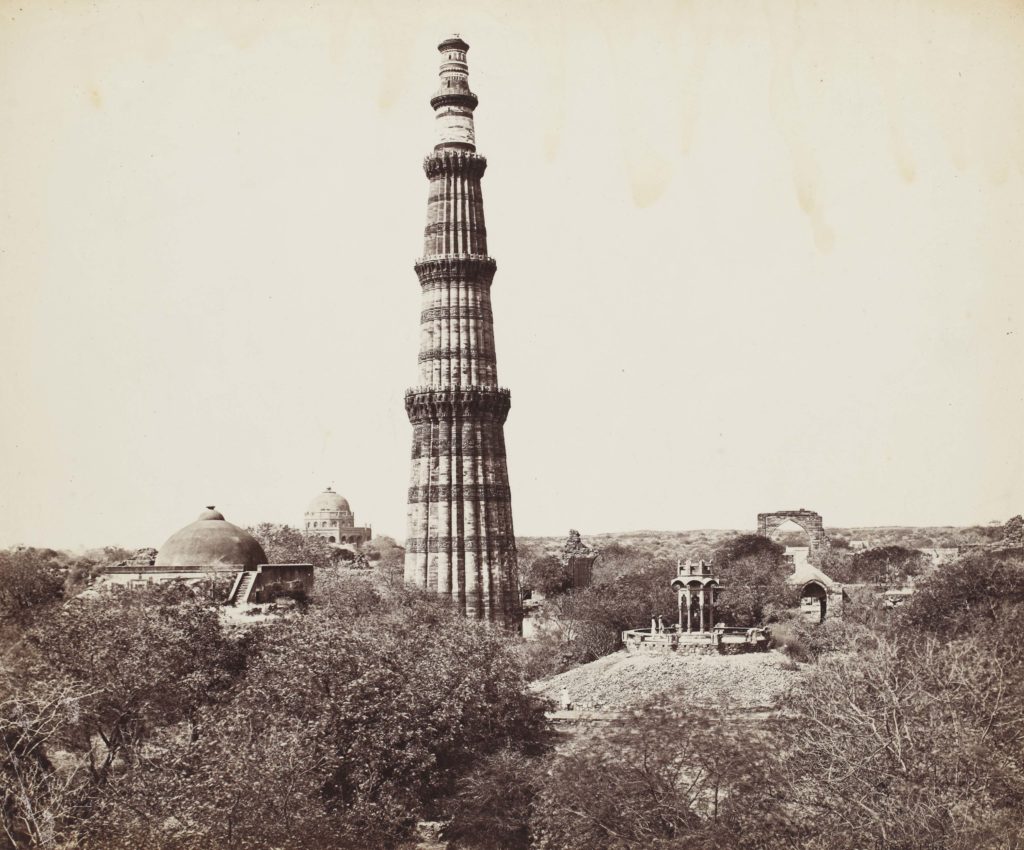 Qutb Minar and the Qutb complex 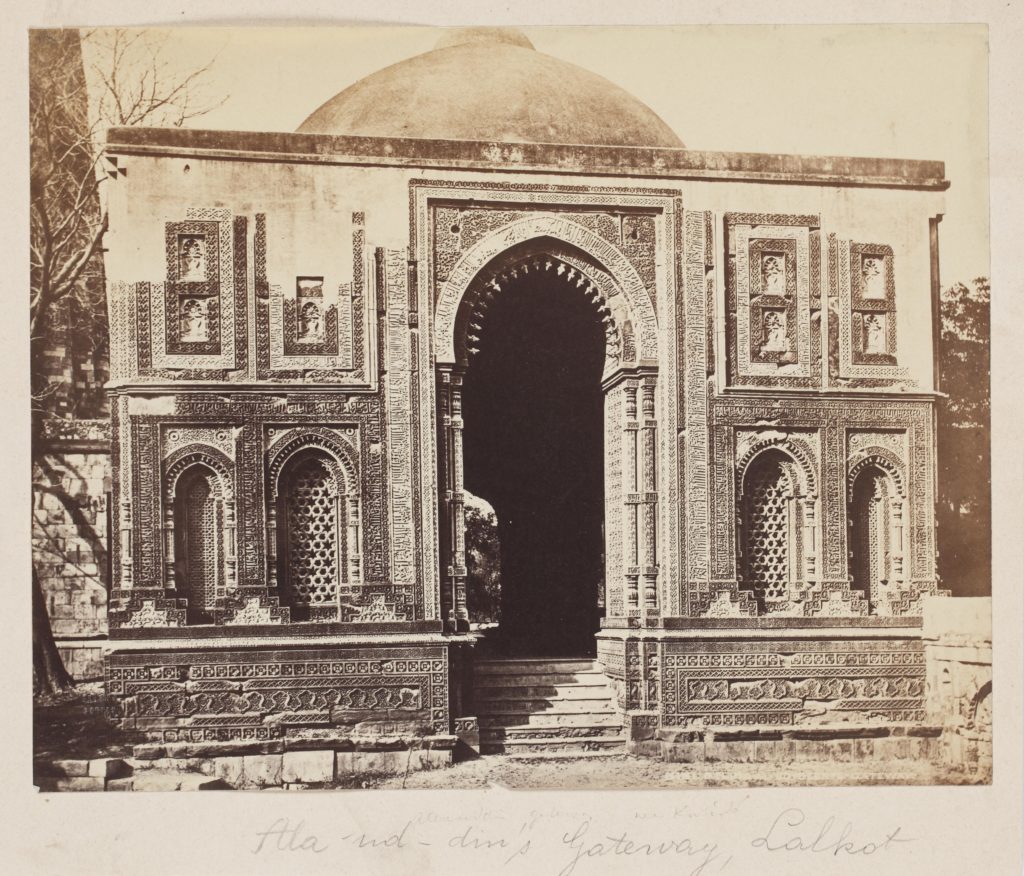 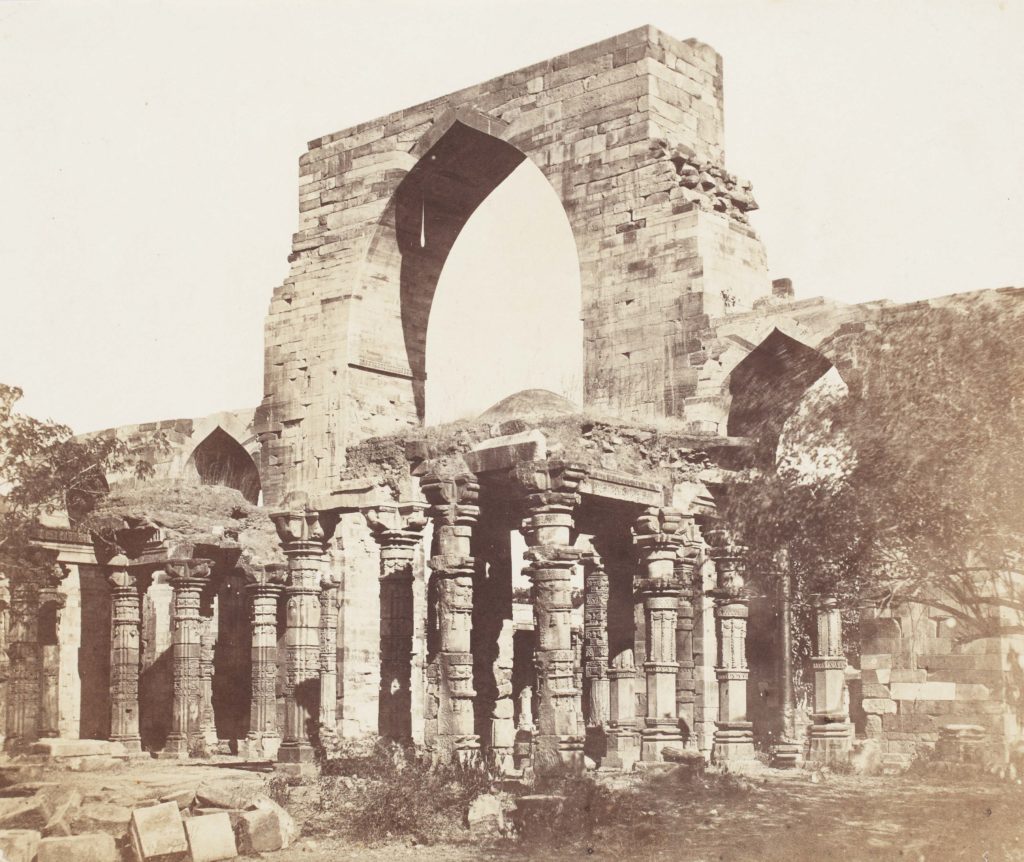 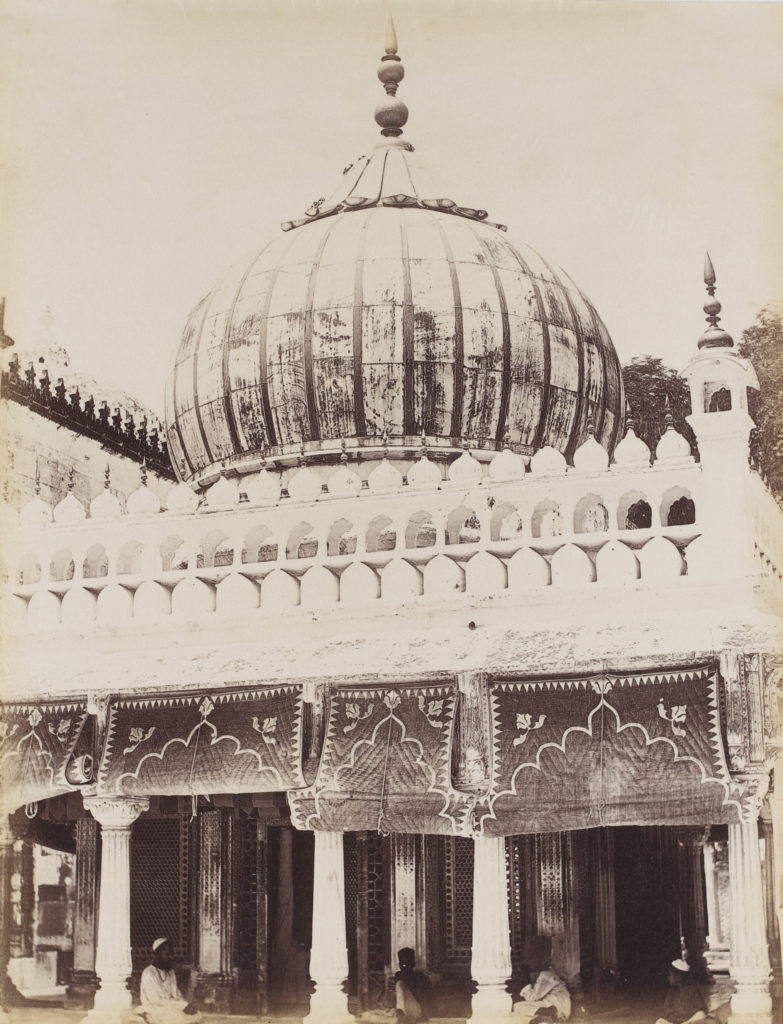 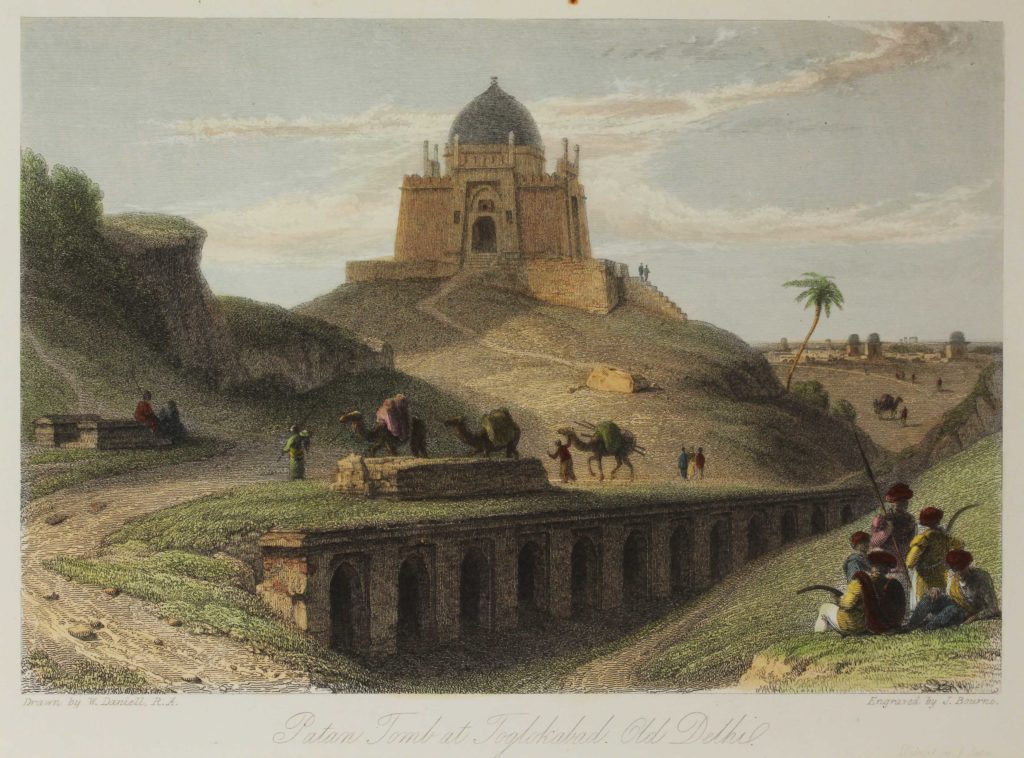 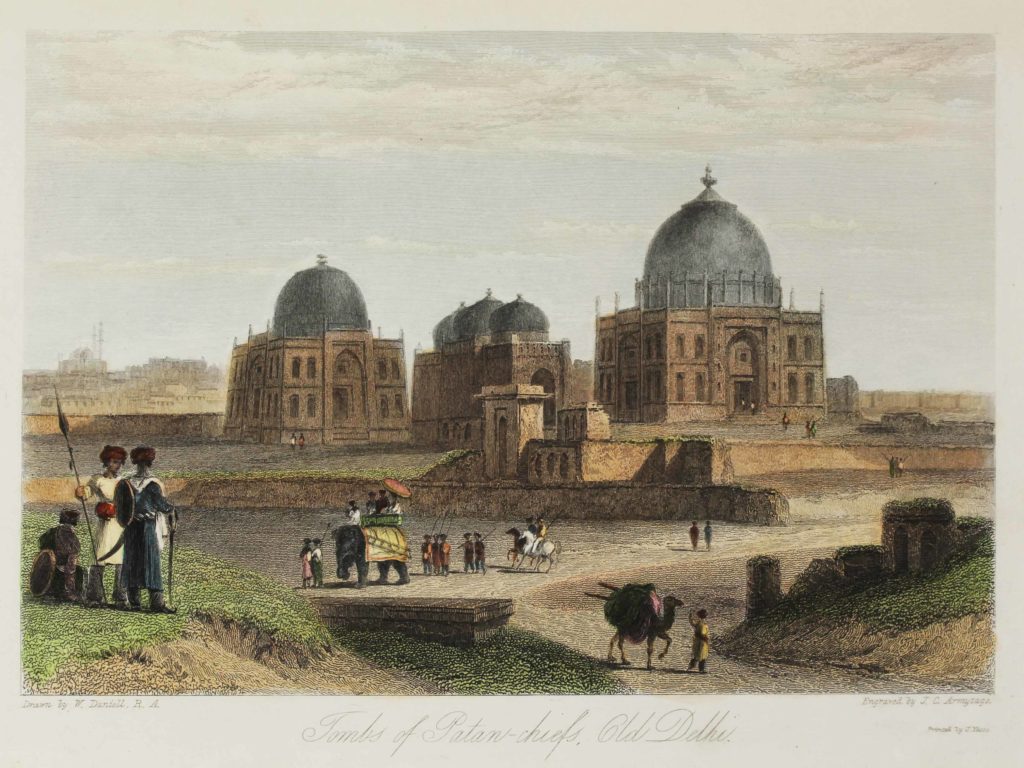 Of all the Mughal emperors, Shah Jahan would leave the most indelible mark on the blueprint of Delhi. Besides iconic landmarks like Red Fort and Jama Masjid, he would build an entire new city, Shahjahanabad, known today as Old Delhi. Also significant from this era are the final resting places of the increasingly powerful noblemen who served the later Mughals, like Safdarjung, and the tomb of Jahanara, daughter of Shah Jahan. 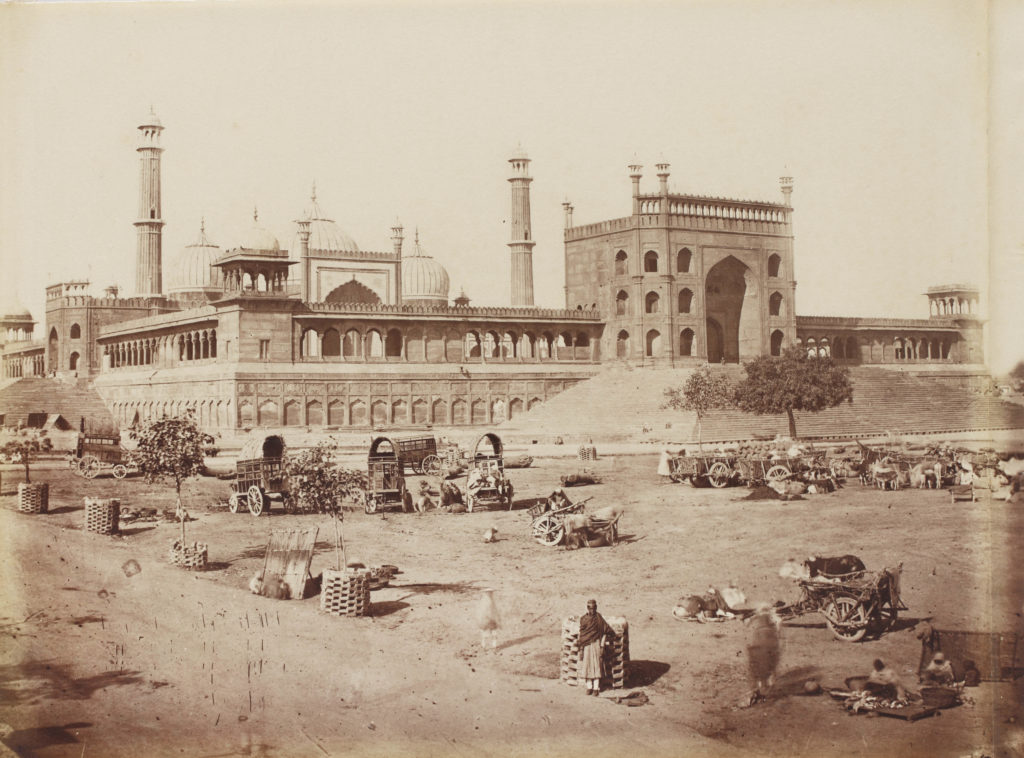 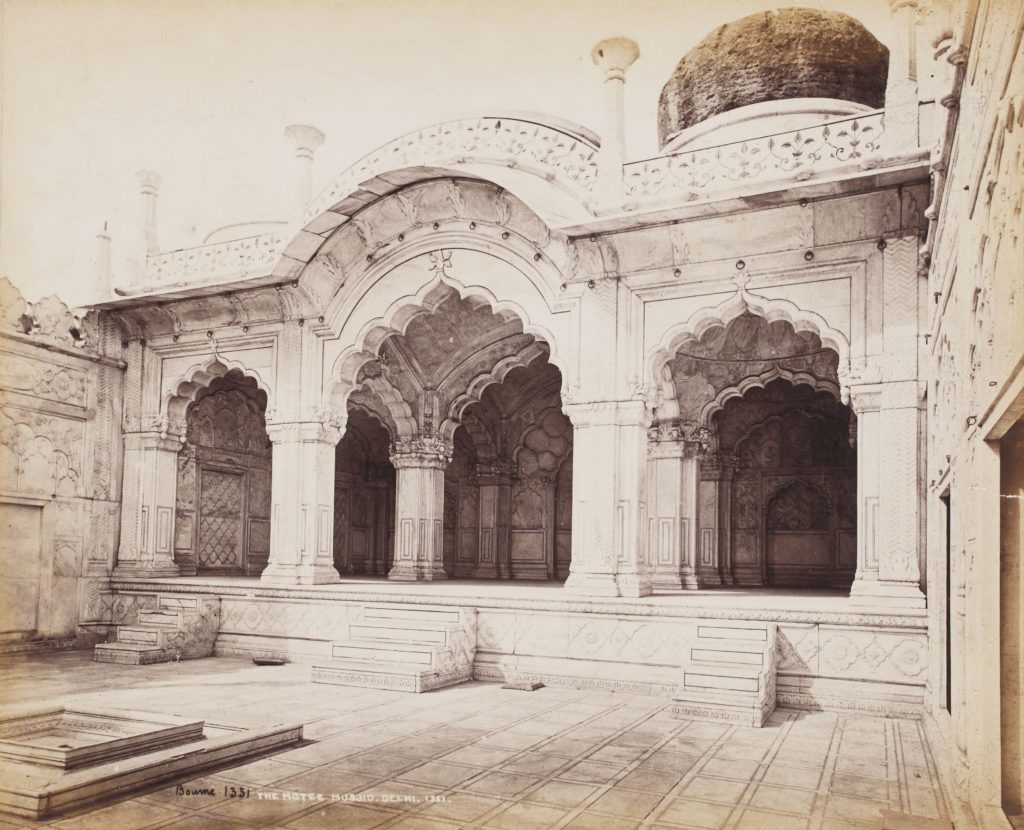 Moti Masjid inside the Red Fort 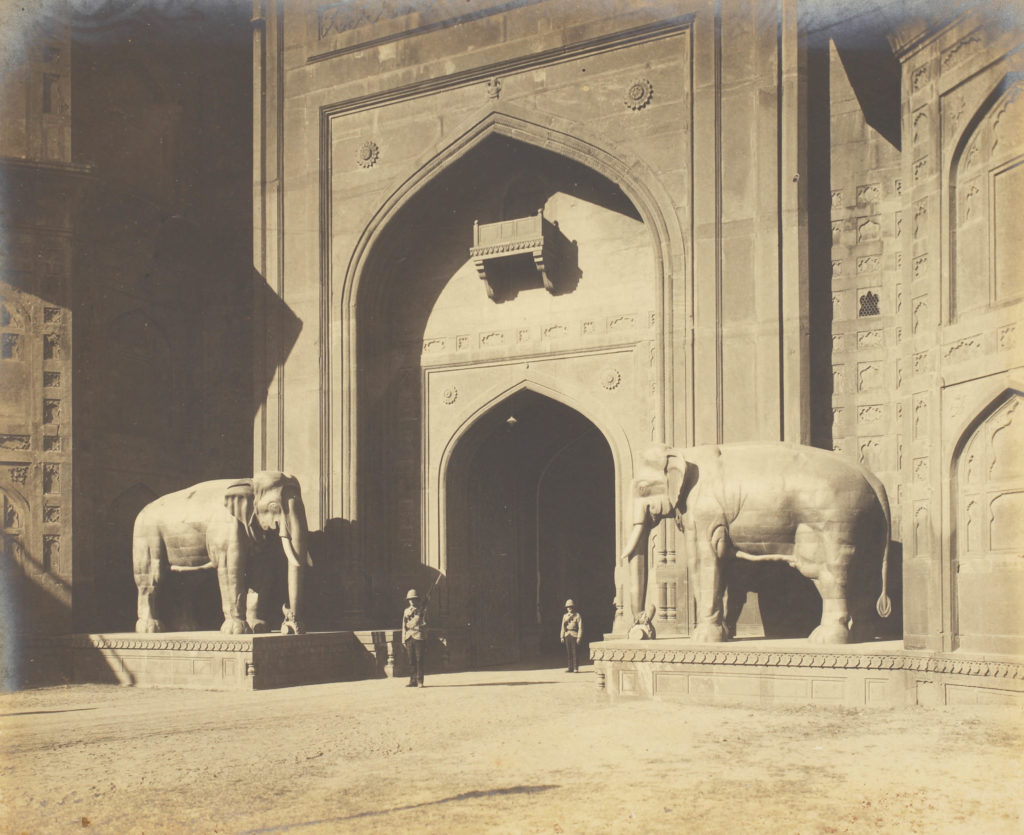 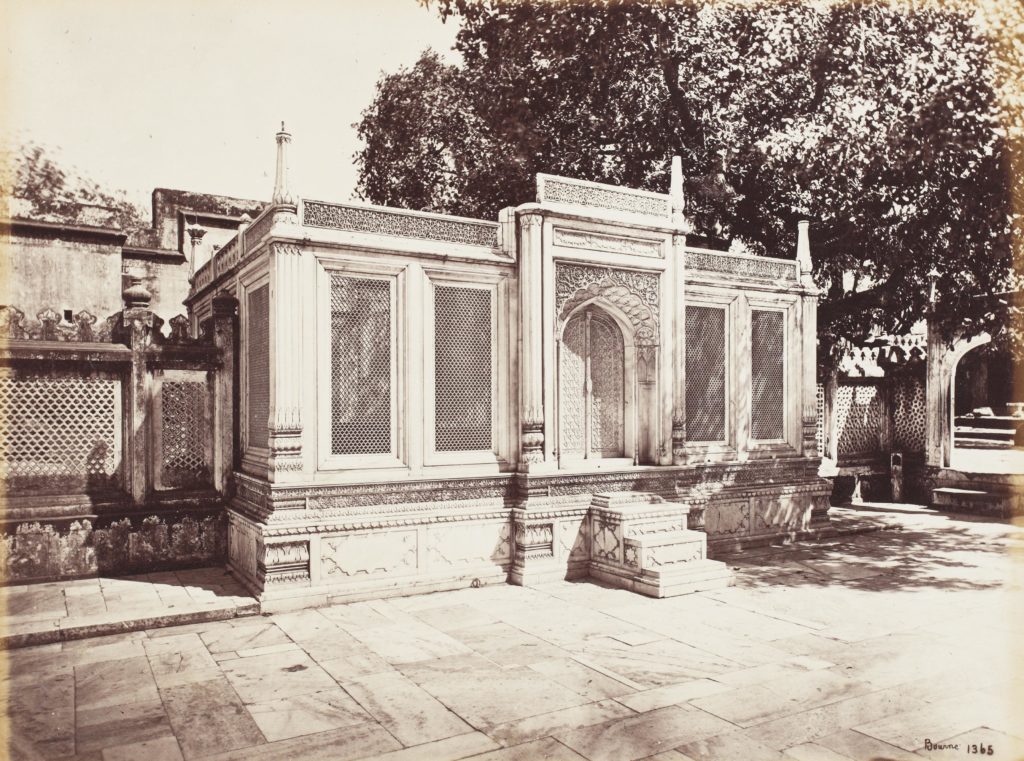 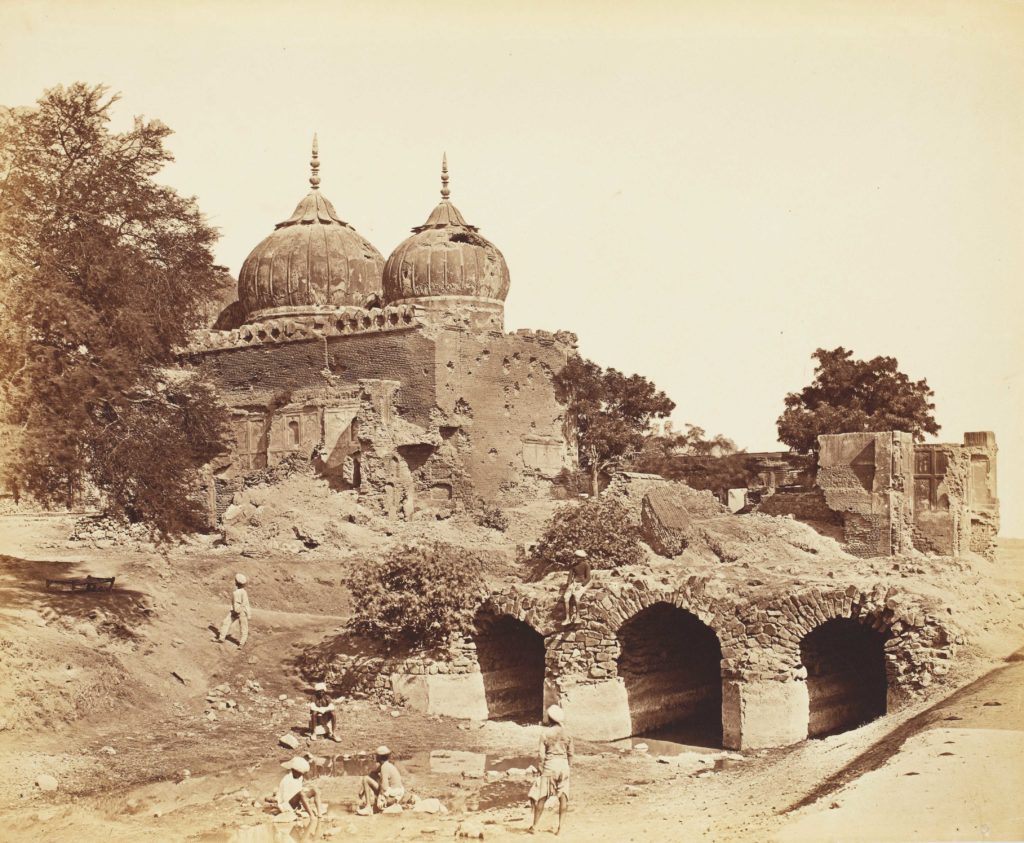 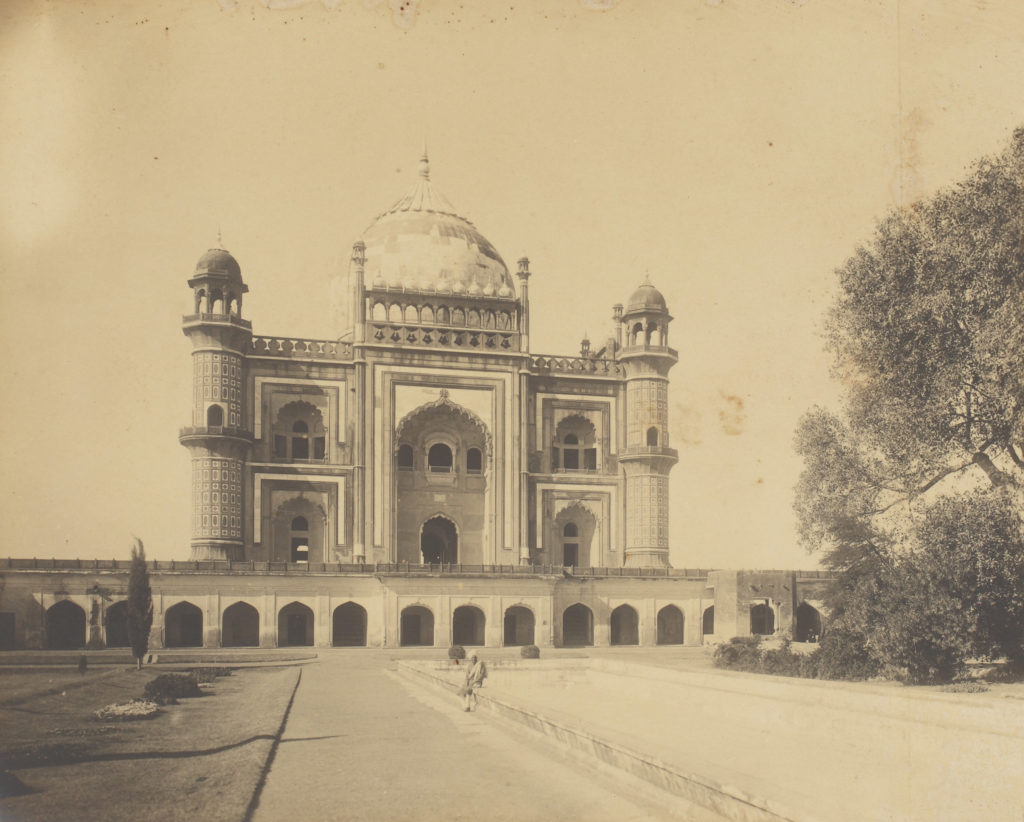 After the Uprising of 1857, the Crown took over the rule of India from the East India Company. But Calcutta remained the capital of the British empire in India and Delhi would serve only as the site of a few memorials to the martyrs of the Uprising and the odd clock tower and church. It was only after the capital was shifted in 1911, that a ‘New Delhi’ would be built by such British architects as Sir Edwin Landseer Lutyens and Sir Herbert Baker. Most of the photographs below are from the album created for the Delhi Durbar of 1911. 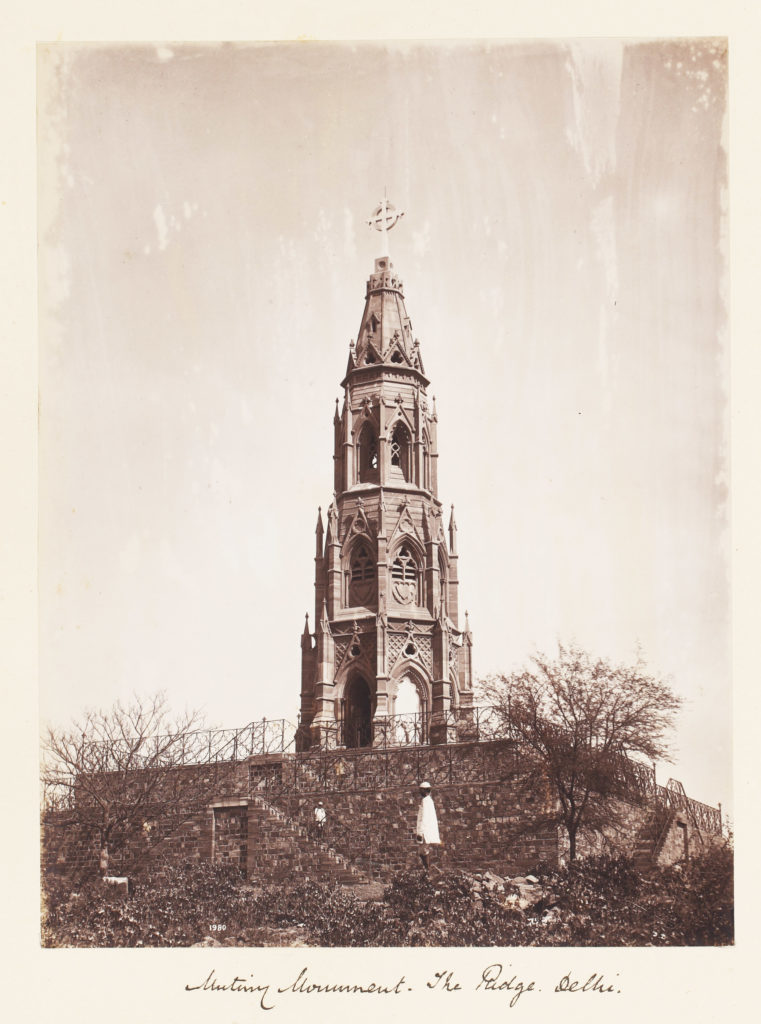 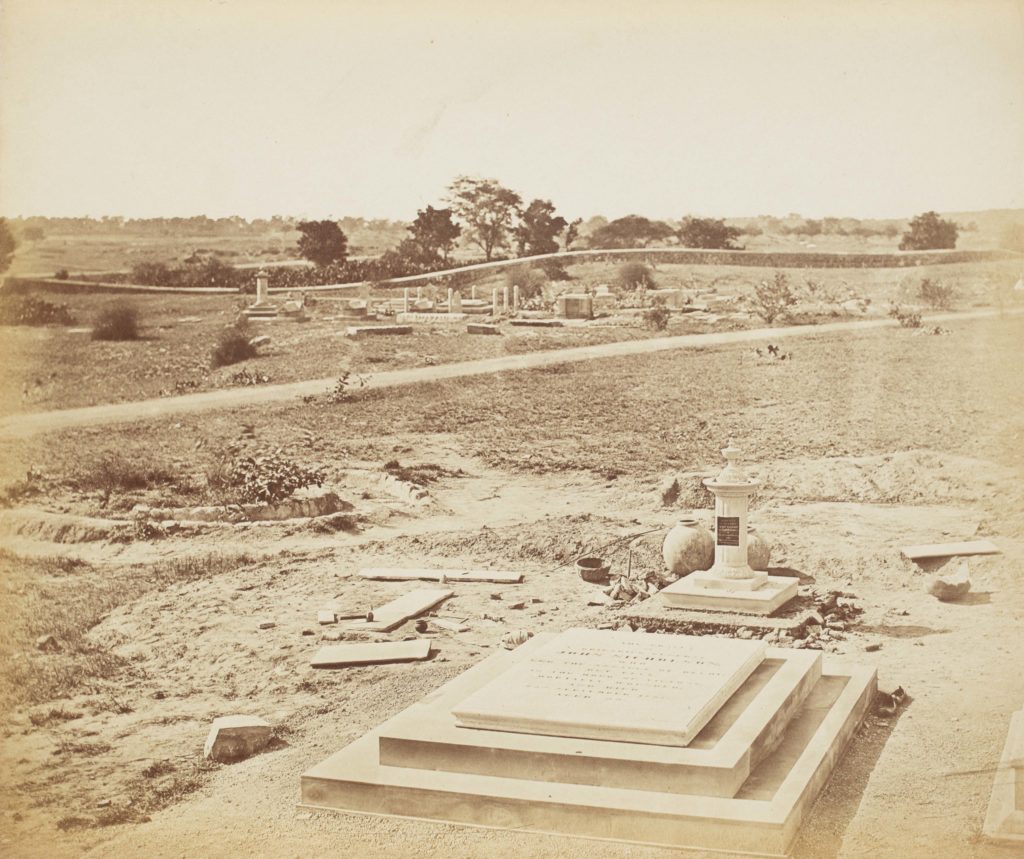 Tomb of Brigadier General John Nicholson, killed in the Siege of Delhi in 1857 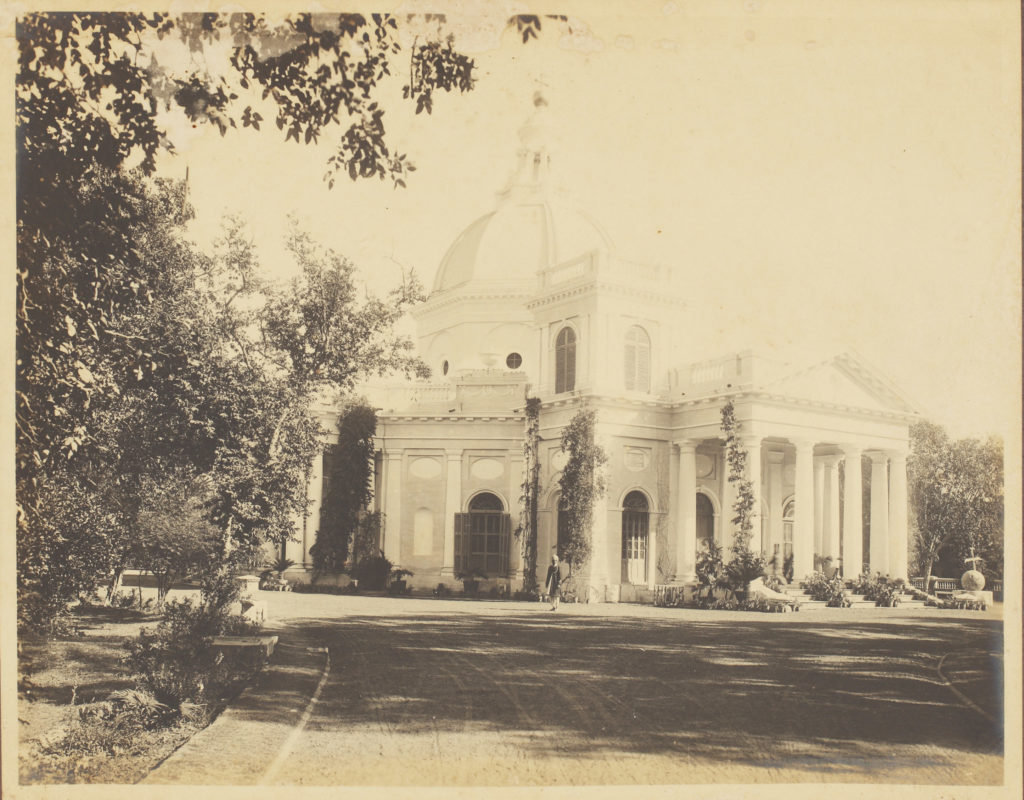 St James Church, one of the city’s oldest churches 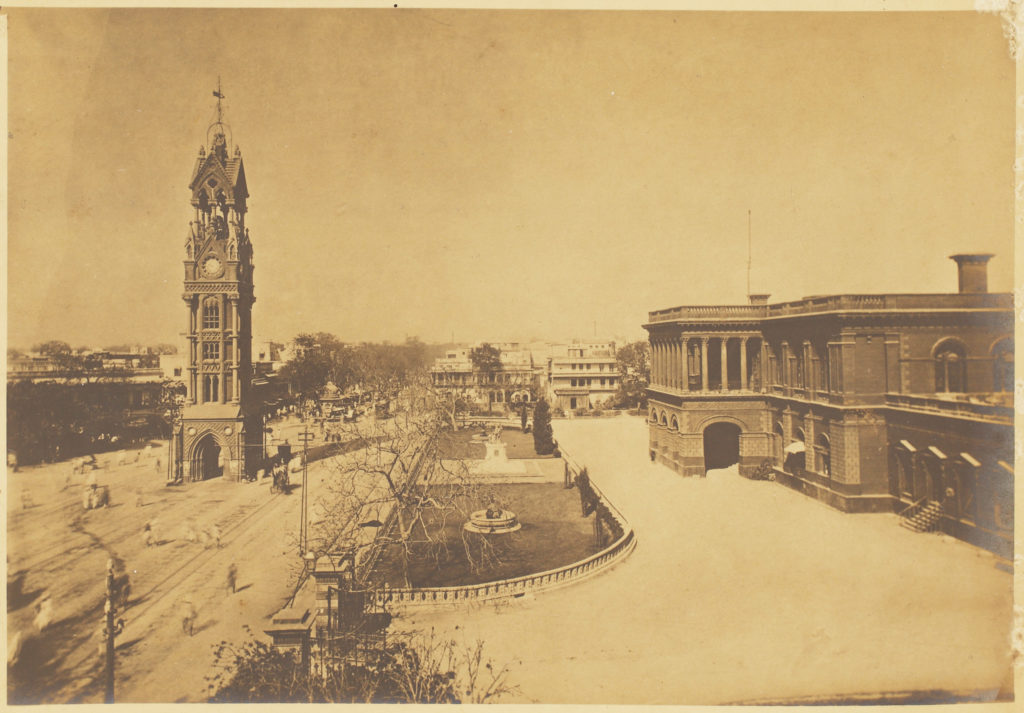