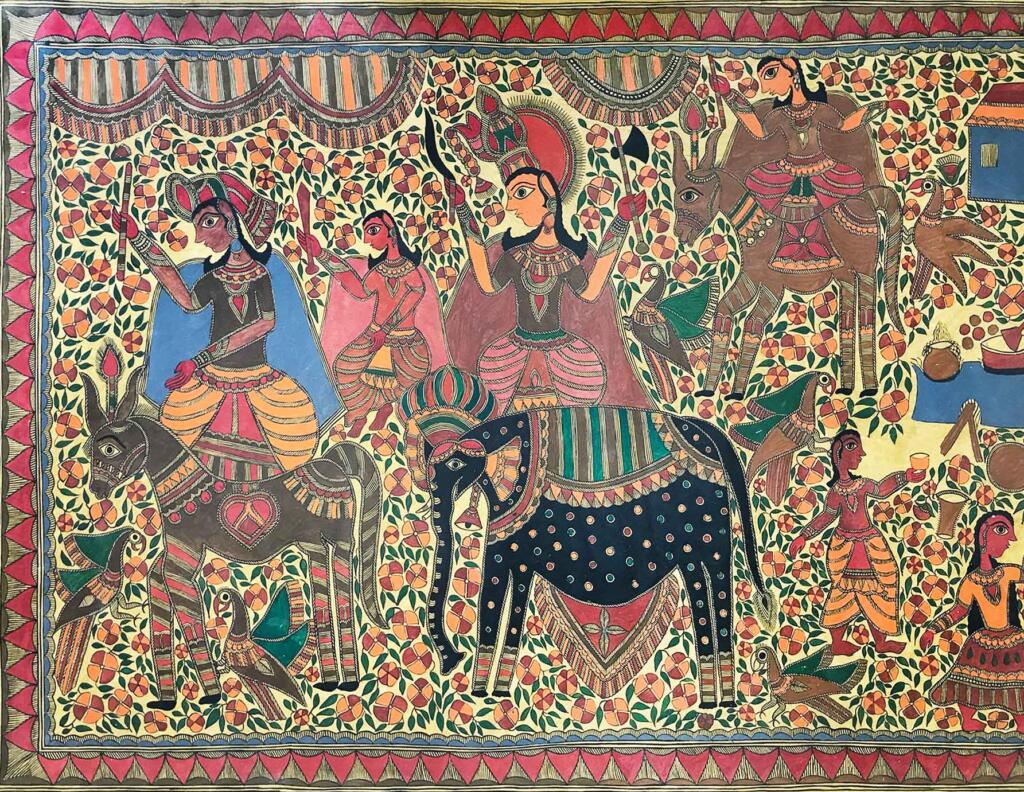 We know two things about the first-ever Madhubani artists to hit the national spotlight in the 1960s. All of them were women. And almost all of them belonged to dominant castes. But a rising tide lifts all boats and the global attention that surged into the region through the next few decades brought greater opportunities for everyone here. Visitors from other parts of India as well as from Japan, France and America were suddenly flocking to this corner of Bihar to showcase and acquire the art, as well as study its culture, history and people. Even as they studied it, Madhubani art was changing.

Besides financial freedom for women artists, outsiders brought with them opportunities for travel and access to a marketplace that didn’t enforce the rigid codes of caste, gender or faith. This led to Madhubani paintings becoming more refined, contemporary and robust. All artists drew from the Bharni-Kachni styles used by the Brahmins and Kayasthas and with equal enthusiasm, they adopted Dalit innovations like gobar and godna, and the use of natural dyes. Art was living up to its full promise in Madhubani, allowing a free exchange of ideas, toppling barriers and giving freedom to its creators. Or at least, it seemed that way.

Cut to 2020. In the wake of the Hathras rape and murder, Outlook India published an edition of essays by Dalit women. On the cover was a Madhubani painting by Malvika Raj. It showed a beautiful dark-skinned woman, large somber eyes raised and hair flowing upwards like she’s plunging under water. Emerging from the forest of her hair are flowers, deer, peacocks painted in the classical style. What makes this a powerful image is the reminder that despite its early promise, art didn’t quite manage to shift the hierarchies of caste in Madhubani.

In her essay for the magazine, the artist Malvika Raj wrote, “The caste prejudices in the art world are as deep as they are absurd. Once I went to meet an artist who teaches Tantric Art, a stream of Madhubani practised by Brahmins. I asked him if he could teach me. He refused. That art belonged to the dvijas, he said—apparently some cosmic order would be disrupted if Dalits learnt it!” If a young NIFT graduate from Patna ran up against this sort of gatekeeping in the 21st century, you can be sure that her foremothers faced all this and worse. From the subject of their works to the mode of their expression to their ability to access government aid, so much was dictated by caste. Ironically, though, Dalit and Bahujan women’s engagement with the art has only enriched it at every step of its modern history. 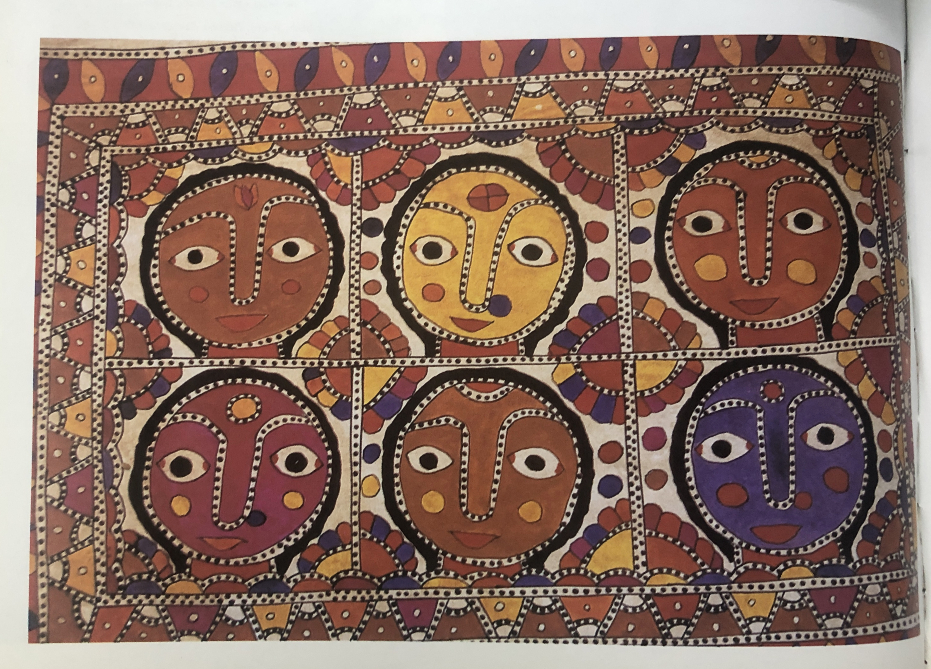 In 1970s, Jamuna Devi became the first Madhubani artist from the Chamar community to receive international fame and eventually, the National Award. She was a trailblazer in every aspect of the art, her legacy touching upon technique, subject and style. Today artists across the board wash their canvas with cow-dung to simulate a mud wall and show up colours more brightly. This was Jamuna Devi’s innovation, as was the Gobar style of painting characterised by two parallel lines. Finally, she painted from her life leaving behind autobiographical glimpses of a rural existence circumscribed by caste. 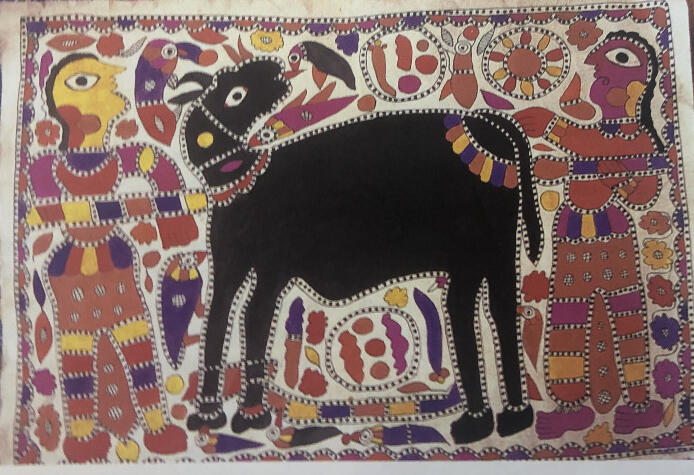 Chamars disposing off a dead cow, Jamuna Devi, from the personal collection of Neel Rekha, photograph by Dilip Bannerjee/Marg magazine

Artist couple Rodi Paswan (also spelled Raudi) and Chano Devi experimented similarly to create within the confines imposed on them, specifically those that forbade the drawing of Hindu gods like Rama and Krishna—a mainstay of the genre. Paswan created the oeuvre inspired by folkhero Raja Salhesh. Today, his niece and grand-nephew Urmila Devi and Shrawan Paswan enjoy greater freedom to paint from the Hindu pantheon but they also continue to tell the story of this Dusadh deity. Ideologically, Malvika Raj follows in the footsteps of Rodi Paswan as she creates art immortalising such modern Dalit and Bahujan idols as BR Ambedkar, Savitribai Phule and Lord Buddha.

Rodi and Chano were a real Madhubani power couple. With encouragement from the German anthropologist, folklorist and filmmaker Erika Moser-Schmitt, Chano Devi and Palti Devi evolved the Godna style. Palti Devi was a Natin or traditional tattoo artist, who inked the chest and limbs of Dusadh women. Dilip Narayanan, director at Gallery OED in Cochin, says about Godna, “These tattoos comprised of auspicious and protective images mostly done in rows and concentric circles. Godna paintings would depict flowers, grains, fields, animals and deities done in lampblack ink by a bamboo pen.  Through Chano Devi primarily and later [her daughter-in-law] Urmila Devi, a political voice emerged that was soon amplified by other Dalit women in the region.” Narayanan believes the work of Urmila Devi and Shrawan Paswan are crucial in understanding the contemporary Madhubani art scene through a Dalit perspective. 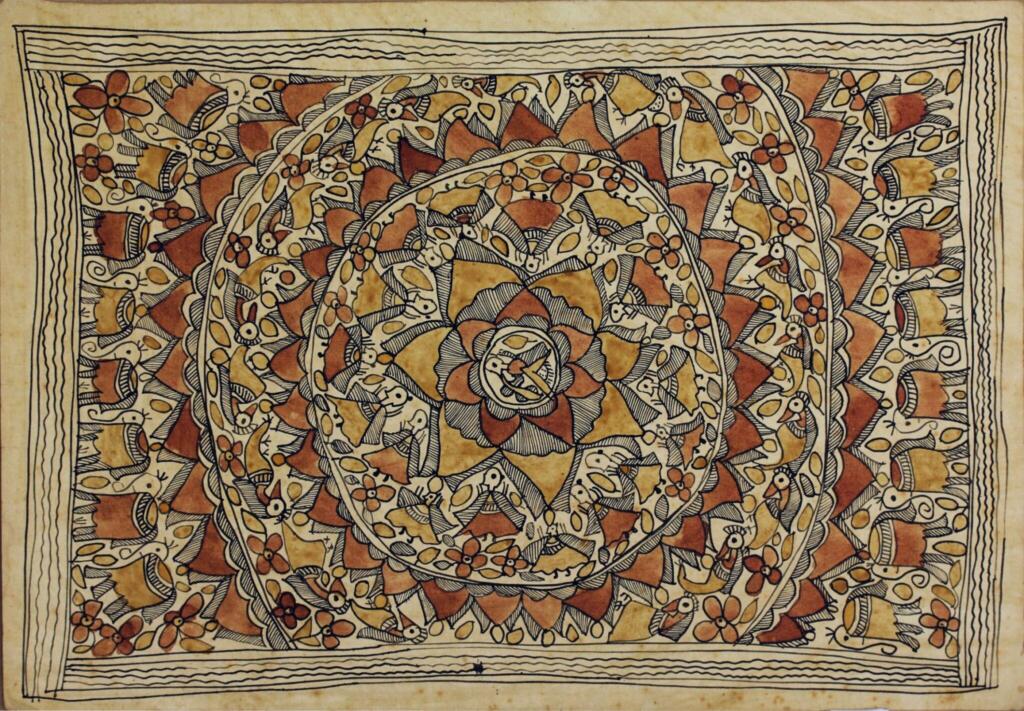 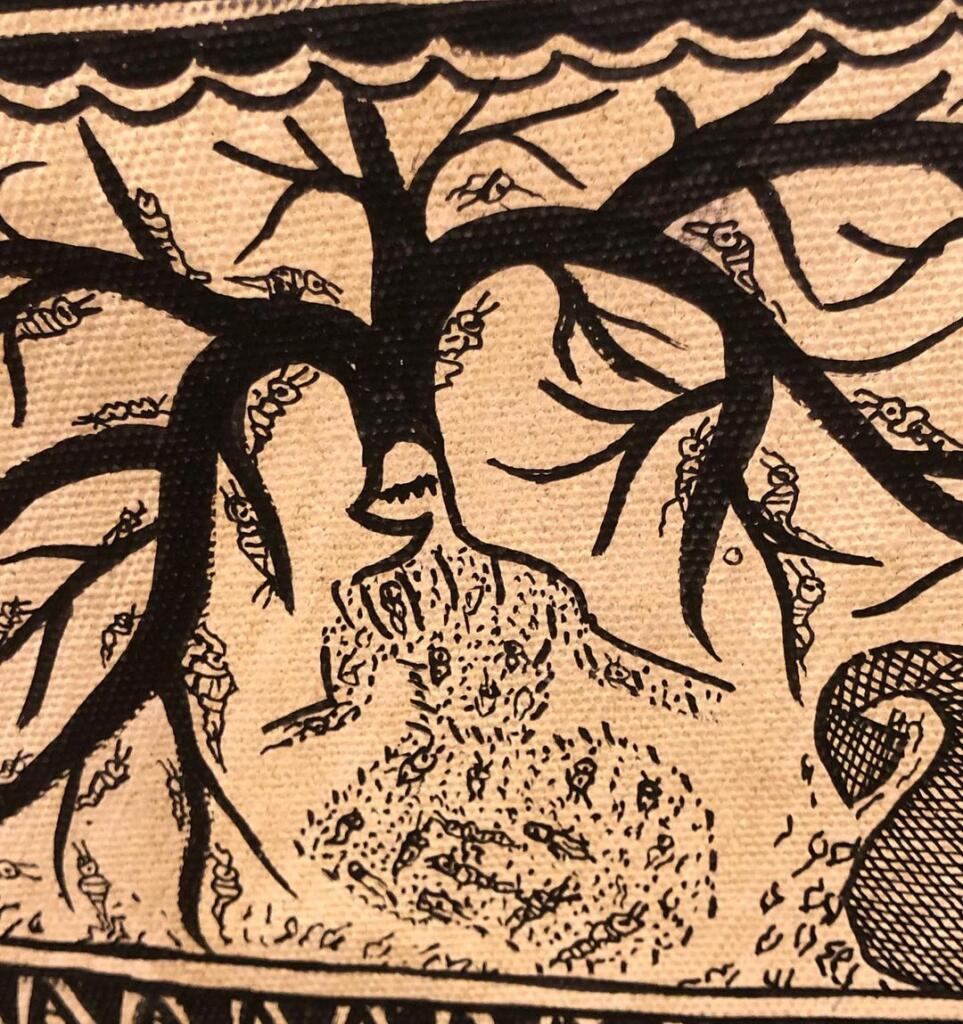 The history of influential Dalit artists in Madhubani would be incomplete without mention of Dulari Devi. Belonging to the fisherfolk or Machwara community, Dulari Devi at first seemed destined to follow the grim path set before her: no school, hard physical labour from a young age and married off at 12. After suffering abuse in her husband’s home and losing her baby daughter, she returned to her maika—much like Sita before her—and went back to work at the home of a dominant caste family. This is where the tale diverges from convention. The house where Dulari Devi worked belonged to the award-winning Mithila artists Karpuri Devi and Mahasundari Devi. Or as Dulari Devi knew them, Chachi-Dai and Dai-ji. 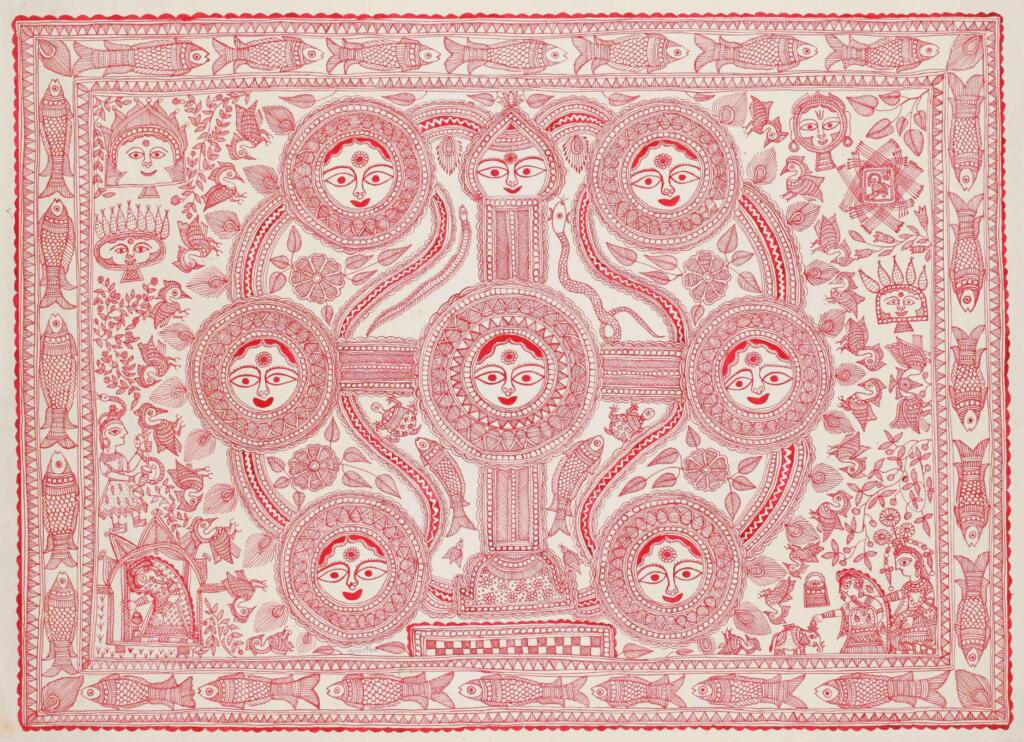 Her voice is warm with love even today as she speaks of her art tutors. “Unhone humko himmat di. Mehnat karwaya.” They gave me courage, made me work hard. Karpuri Devi and Mahasundari Devi insisted that the young girl who worked in their home learn how to write her name and paint. They lit a flame and Dulari Devi’s own unique vision and vibrant style did the rest. The timing was fortuitous too; the art world was very bullish on Mithila paintings and work came in for her from publishers, government bodies and schools. In her illustrious career, Dulari Devi has taught at the Mithila Art Institute for eight years, released an illustrated autobiography with Tara Books and painted extensively at the behest of the Bihar Museum and the state government. She built a house not far from the home of Karpuri Devi and Mahasundari Devi, and still visits every day although she doesn’t work there anymore. 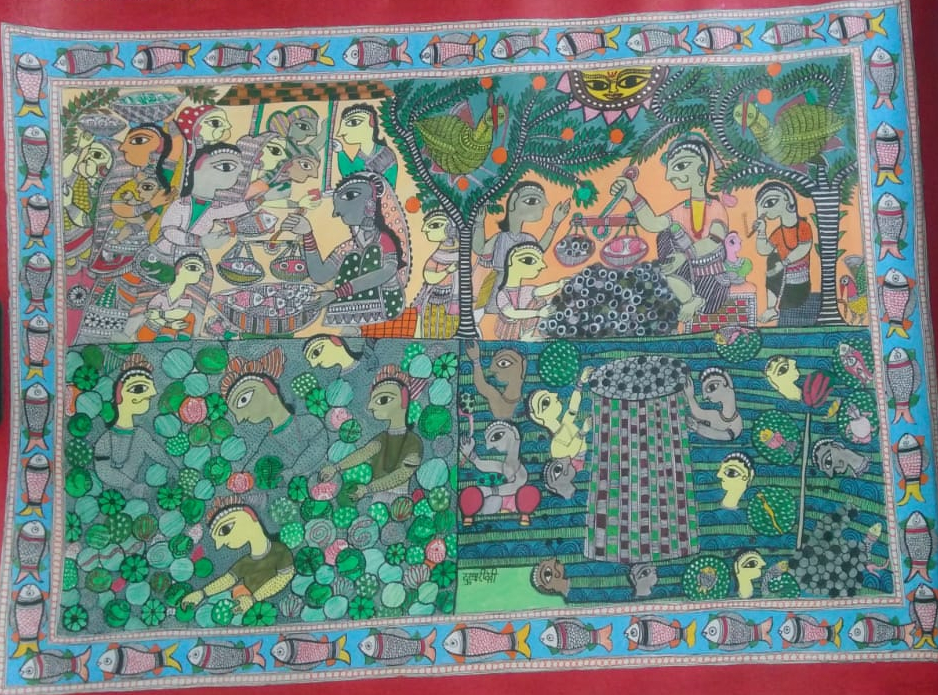 Painting of the Machwara community by Dulari Devi, from the artists’s collection

Dulari Devi is passionate about teaching art to children from poor families. She remembers a time when all she had was one set of clothes that would have to be washed and worn every day. When she hears about Malvika Raj’s experience with gate-keeping as a Dalit artist, she says yes, such things have happened to her too, they still happen even today. But she doesn’t want to talk about it. She wants to focus on teaching art to her nephews, nieces and all the children at the schools she’s invited to. As someone trained in the Kayastha tradition, Dulari Devi has painted all the Mithila classics like kohbar, episodes from the Ramayana and Hindu gods and goddesses. But she also draws from her own life, telling the life of her people, the Machwaras of Madhubani.

In the 1970s, poet Dinos Christianopoulos wrote this couplet in response to his ostracisation by the Greek literary community for his homosexuality. Even today, this sentiment resonates with the struggles of oppressed people everywhere:

what didn’t you do to bury me

but you forgot that I was a seed

In the forest of honey, buried seeds of an anti-caste revolution have struck deep roots and put out brilliant green shoots. Dalit and Bahujan artists always have and continue to infuse creative genius into the form and keep it relevant. As their struggle for equality rages vigorously in society at large, it flows too through the veins of Madhubani art. Without these seeds, there would be no forest at all.