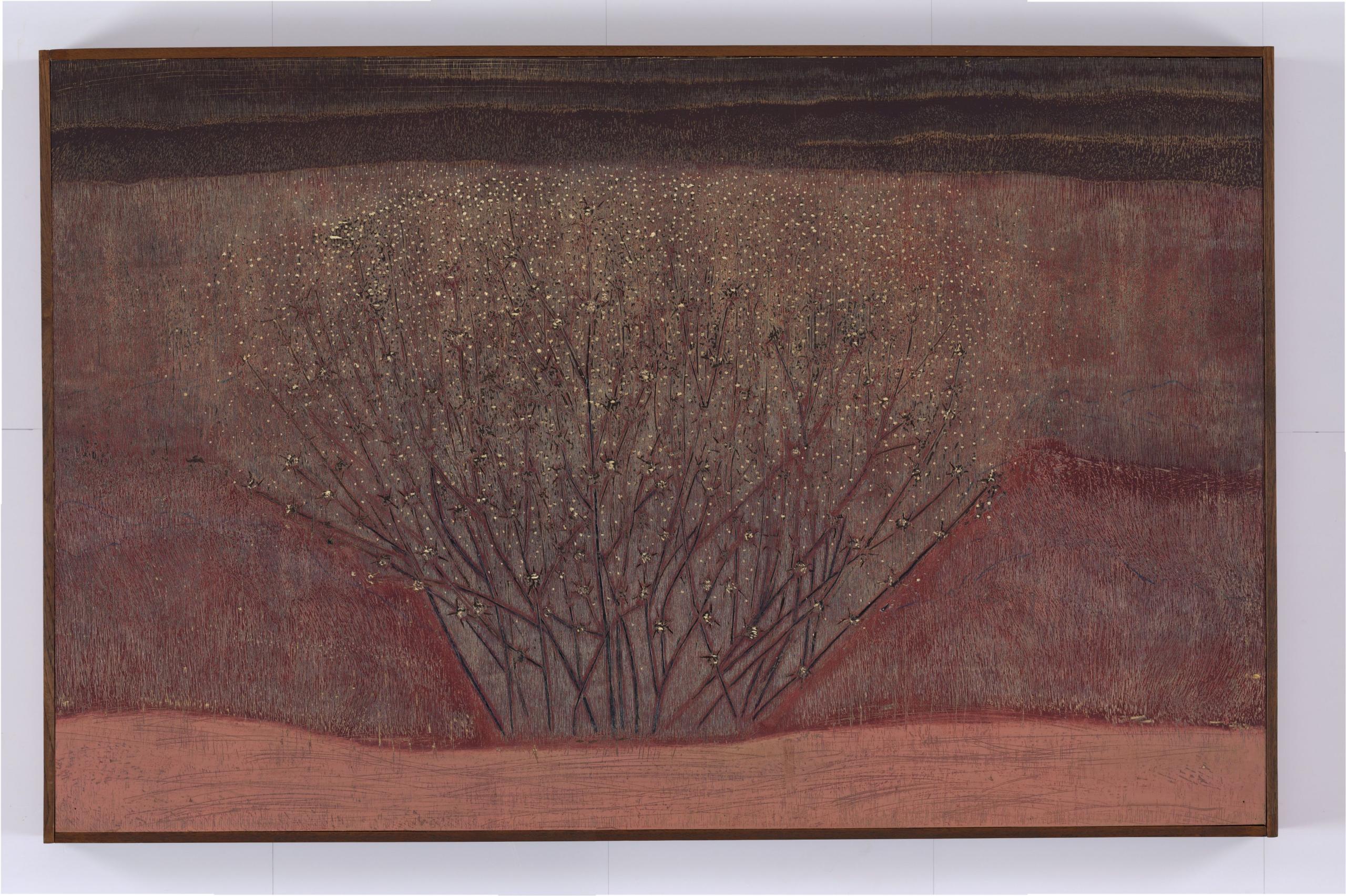 From the series ‘Shadows under my sky’, 2021, woodblock, Soghra Khurasani © Sarmaya Arts Foundation

A possible meaning of Soghra Khurasani’s name is ‘the youngest child of a family from the land of the sun’. The land alluded to here is the historical region of Khorasan, whose geography included parts of present-day Iran, Turkmenistan and Afghanistan. Soghra says, “My great-grandparents were invited to Hyderabad to teach almost 100 years ago. After Independence, my family stayed on.” The 38-year-old artist grew up in Vishakhapatnam and now lives in Baroda, though her voice still carries the cadences of Telugu. The youngest of a large, conservative Muslim family, Soghra forged her own identity through art.

In 2010, Soghra graduated with distinction from MS University of Baroda, where she studied printmaking. Five years later, she received a National Academy Award from the Lalit Kala Akademi. Recently, she was among 10 artists representing the Global South at the Bawwaba show at Art Dubai 2022. Soghra and her husband and fellow artist Shaik Azghar Ali have founded Awaaz Studio on the outskirts of Baroda. They invite other artists from the city to use this space and plan to someday host artist residency programs here. 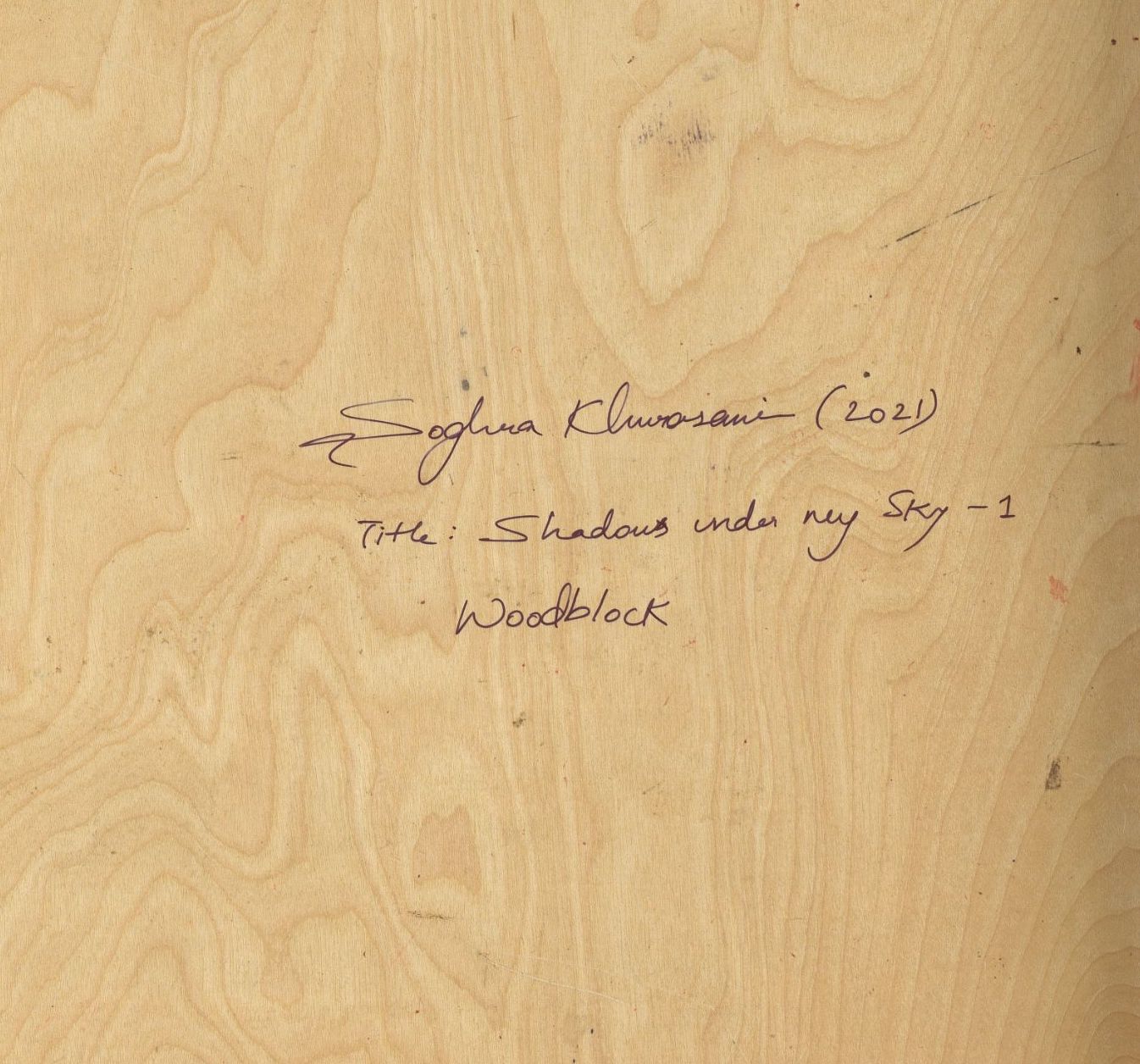 Reverse of a woodblock from ‘Shadows under my sky’, 2021, Soghra Khurasani © Sarmaya Arts Foundation

Soghra’s woodcut prints and etchings reflect her evolving ideals and multiple identities as Muslim, feminist and mother. Like portholes in a ship or a spacecraft, her art offers sightings of otherworldly landscapes bathed in the half-light of dusk—or a gathering dawn. At first glance, these spectral terrains seem to be perfectly tranquil. But a closer look reveals a fury of scratches and storm of colours that rattle this illusion.

We spoke to the artist about her childhood, her practice and her ambitions. If you’re new to her art, here are seven things to know about Soghra Khurasani. In her own words.

1. “My personal journey was tied to my journey with art”

“My father tells me Soghra was the name of Prophet Mohammed’s granddaughter. I’ve also been told it’s a name given to the youngest in the family. I am the youngest of all my siblings. I was a very serious child who loved sports, spending hours playing cricket with the boys. This was not encouraged by my family, so I gave up cricket and started accompanying my sister to art class. Soon all my elder sisters got married, and I worried that I would be next. I knew I had to take up a career very seriously, so I applied to study fine arts at Andhra University. My father was very happy when I stood first in the entrance exam. It was at University that I met my husband, who was a sculpture student there. So my personal journey was very much tied to my journey with art.

2. “We figured out how to survive as artists”

“After I got my bachelor’s degree, I wondered what to do next. I was interested in studying at MSU in Baroda, but they were offering a printmaking course whereas I had been a student of painting. So I visited MSU with some friends. I was fascinated by the printmaking displayed in the college and inspired by the students I met there. I joined the college and moved to Baroda in 2008. At MSU, we were always surrounded by so many wonderful conversations about art. I learned so much in my time there. After I graduated, I worked at Space Studio in the city for two years. Around this time, I got my first solo show. I put everything I earned from that, plus all my savings into buying some land on the outskirts of Baroda where many senior artists had set up studios. My husband and I wanted a place where we could work and raise our daughter together.

“It was not easy, building the studio, doing solo shows and raising my daughter. But we didn’t want to compromise on our art and take up jobs. We worked hard to be where we are right now; we figured out how to survive as artists. Our studio Awaaz is located in the art village set up by 10 other artists. I think more people will join us eventually. Artists need peace and that’s what we have here. We plan to start artist residencies and someday, I want to offer international exchange programs at Awaaz.”

3. “When I visited Iran, I saw a very different country”

“My grandfather would get magazines and books from Iran to stay connected to events in his parents’ homeland, especially during the revolution. I saved one of the magazines After Revolution (1983) in his memory. It was filled with articles idealising the reign of the Ayatollah. When I visited Iran in 2016 for the Khoj-Kooshk Residency exchange program, I saw a very different place than what the magazine promised. I shared with some young Iranians pages from After Revolution, but they felt no nostalgia or connection to the events of their recent past. They face so many restrictions from their own government and feel stifled in their everyday lives. Iran has made the hijab mandatory for everyone, including foreigners. Women caught without it get 75 lashes. By the end of my time in Iran, my relationship to the old magazine, a once-precious keepsake, had changed. As I observed in a note about the Residency: ‘The value I had here for the book has changed, so did my perception towards it. So I decided to scribble the pages and draw a huge black mountain on it, as seen in Tehran. I have seen strong mountains everywhere and they appeared me as a metaphor for the strength that people have even after being displeased with history and present.’ In the work I created after, I explored the idea of free will through installations using objects and images collected during my stay, like whips, veils and public signs, that reflect the struggles of present-day Iranians.” 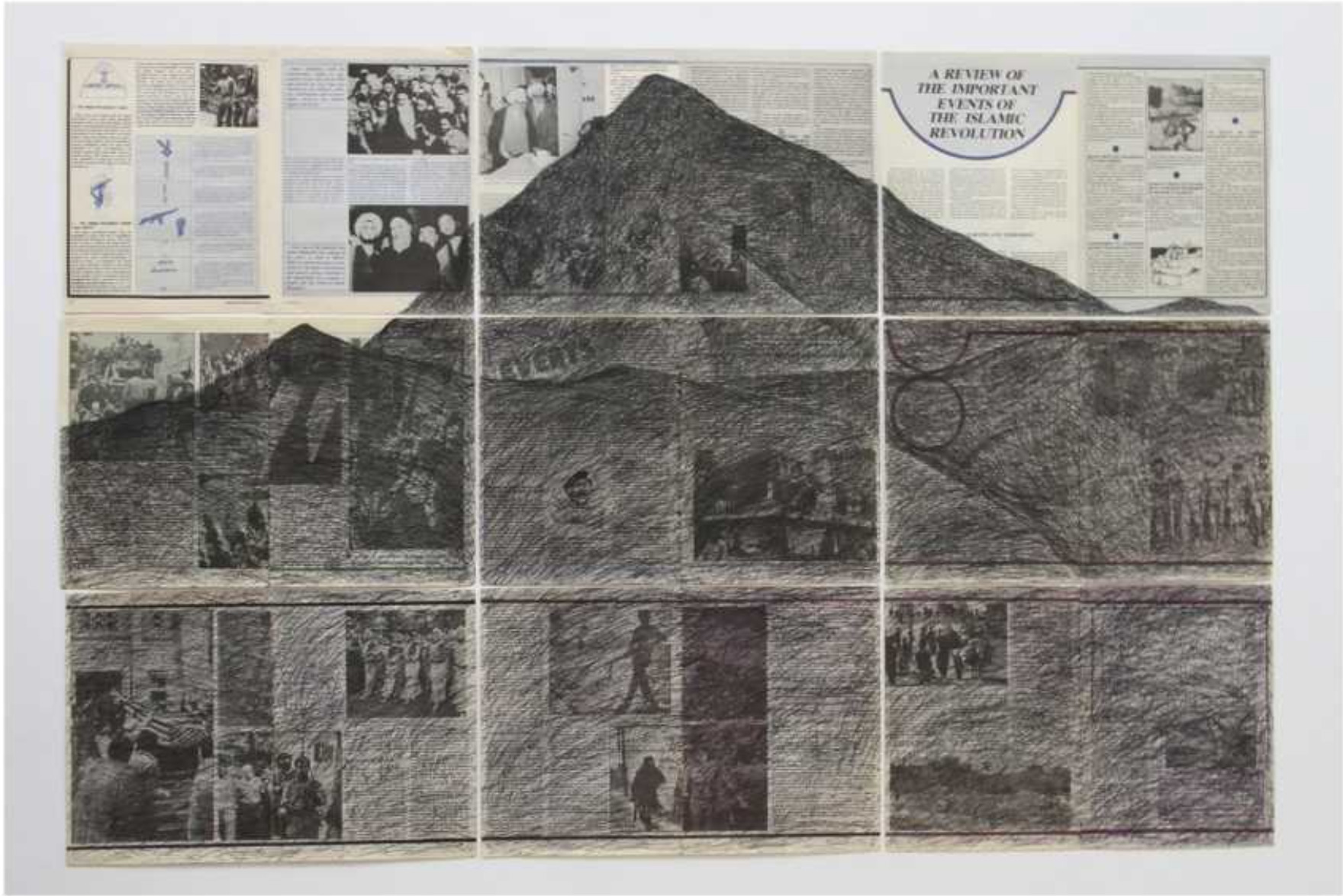 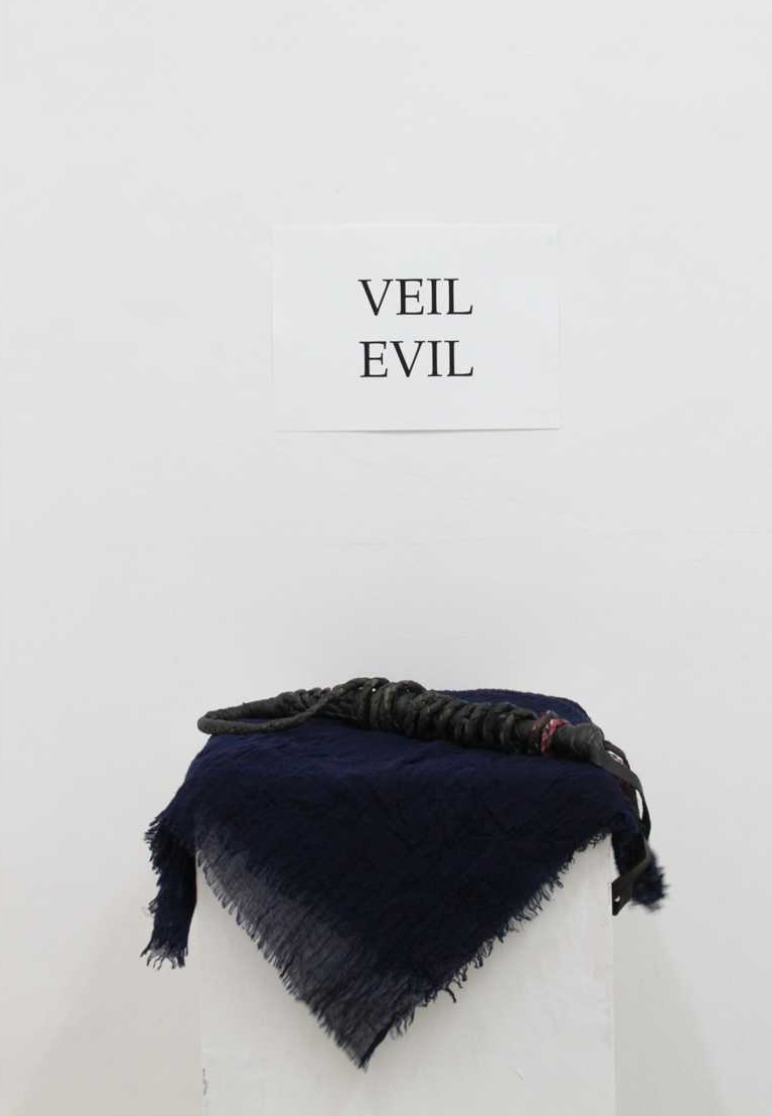 4. “We were singled out as Muslims”

“I started the series Shadows under my sky in 2019. At that time, I wanted to shift to Baroda for my daughter’s schooling but it was difficult to rent a place as a Muslim. We had bad experiences in Baroda, where we were singled out as Muslims. I feel like there’s a kind of insecurity attached to religion and identities in India today.  Meanwhile, I was also witnessing the [CAA-NRC protests] and the Delhi riots of 2020. These events indicate the atmosphere of fear surrounding Muslims in India. That’s when I started this series, to show how shadows are being created over us, to separate us. But under our skin, we all have flesh of the same colour. We are all part of nature; we share the same air. It’s important to think about what we are leaving behind for the next generations because these  shadows will hang over them too—unless we fight to emerge from the darkness.” 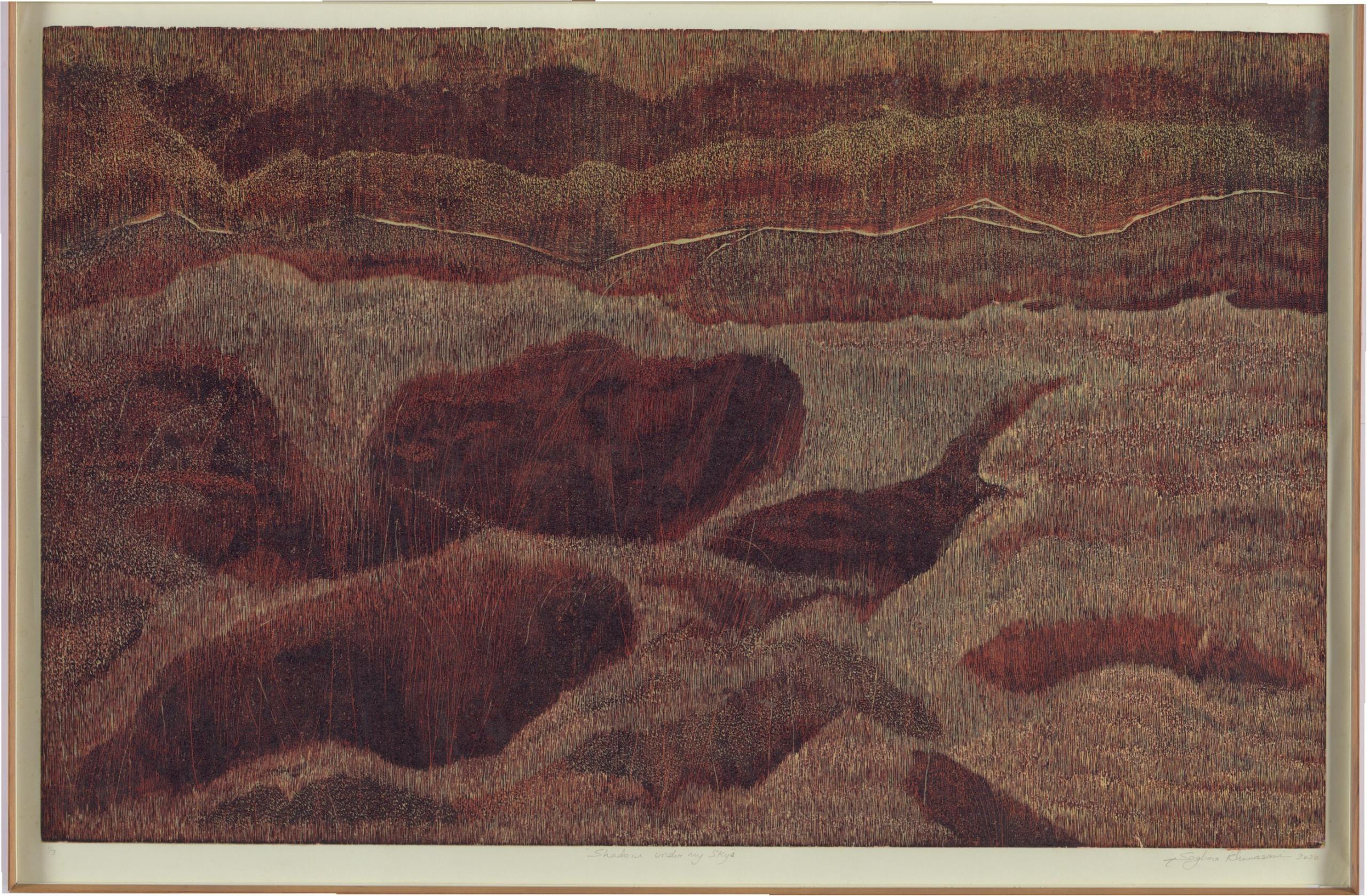 5. “Printmaking is a technique that I mould—it doesn’t define my art”

“When I go to work, I am led by concepts. Printmaking is a technique that I mould as an artist to express certain ideas—it cannot limit my creativity. In woodcut printmaking, every artist takes their own routes to get the results they want. For instance, I add seven layers of colour to each work. My technique involves transferring the image from block to print repeatedly, colour by colour. I enjoy carving the blocks, but printing is very difficult. It’s physically tiring to manually transfer the image from matrix to paper; I don’t use a press, preferring to create impressions by hand. If I don’t balance the colours well, the details on the final print won’t be perfectly sharp. My training and experience in painting helps me here to get the composition right.” 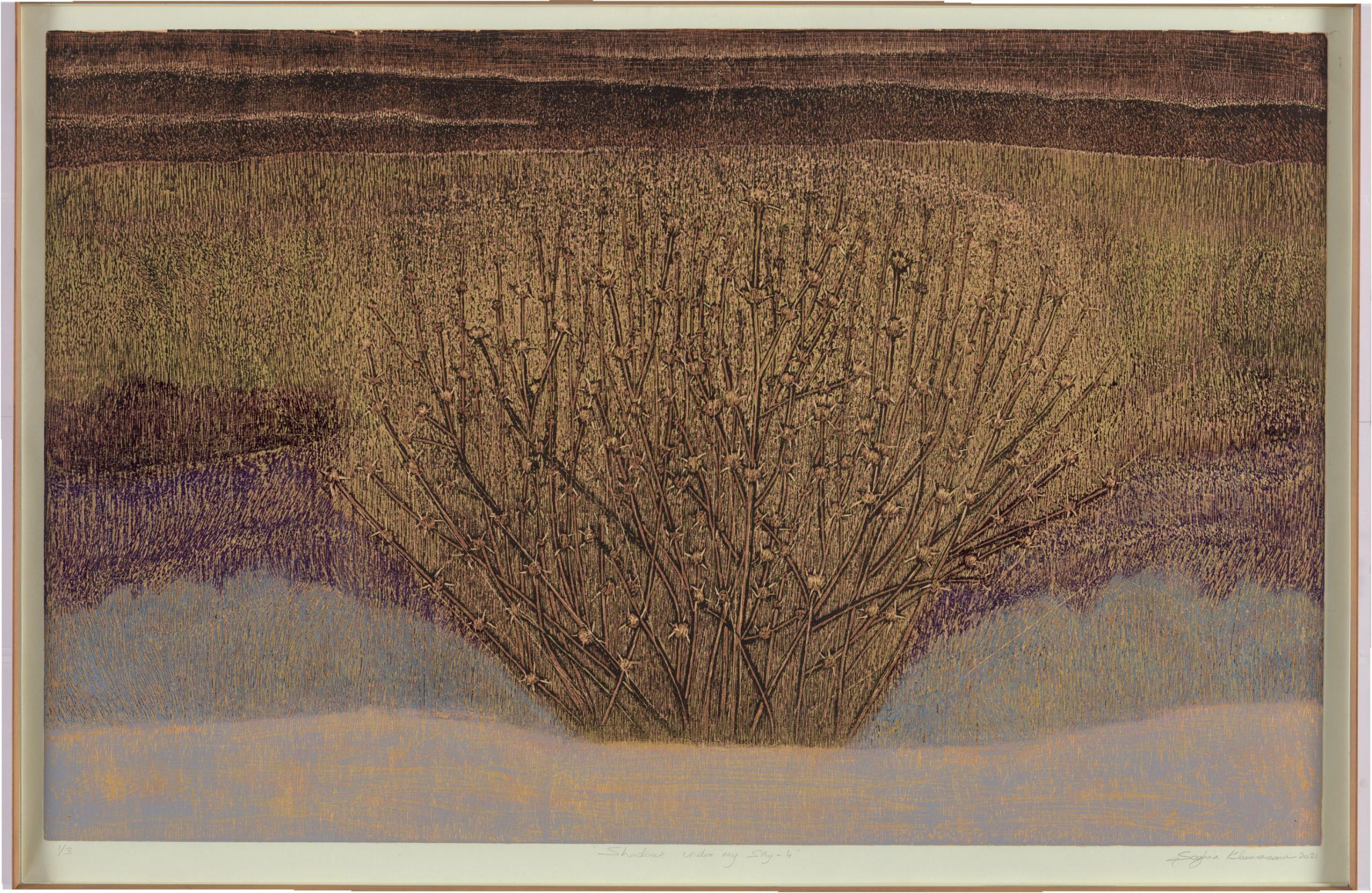 “Mixing colours for printmaking is a challenge. There isn’t a lot of choice in the palettes, so artists have to create our own colours. Each work has its own unique composition—I rarely repeat colours. Of the seven layers of colour in each print, the last two play an important role in determining the final result. For the series Shadows under my sky, I used almost-clashing colours to create a kind of mesmerising effect.” 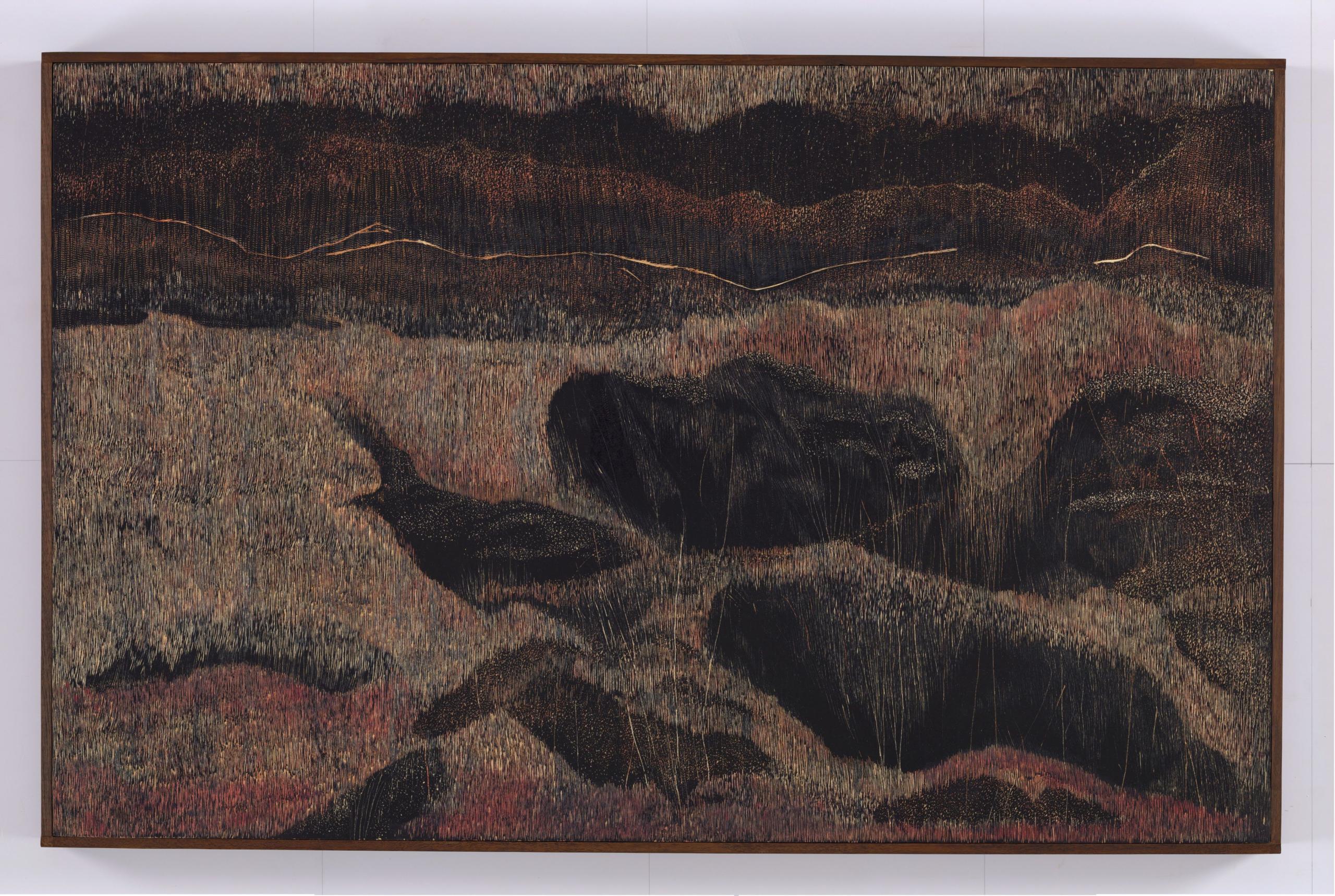 From the series ‘Shadows under my sky’, woodblock, 2021, Soghra Khurasani © Sarmaya Arts Foundation

7. “Motherhood has changed how I create art”

“My early art was more direct. Back then, I was focused on experimenting with the medium and my work was fast paced. But my body and practice were not the same after my pregnancy. Now I manage time between my family and work, and this brought stability in my work. In the past, I could build a solo show in six months; now, my work comes together slower, part by part. But my art still reflects what I observe in my community and my own reflections. In one of the paintings from Shadows under my sky, you’ll see the fields take the shape of the curve of a pregnant belly. 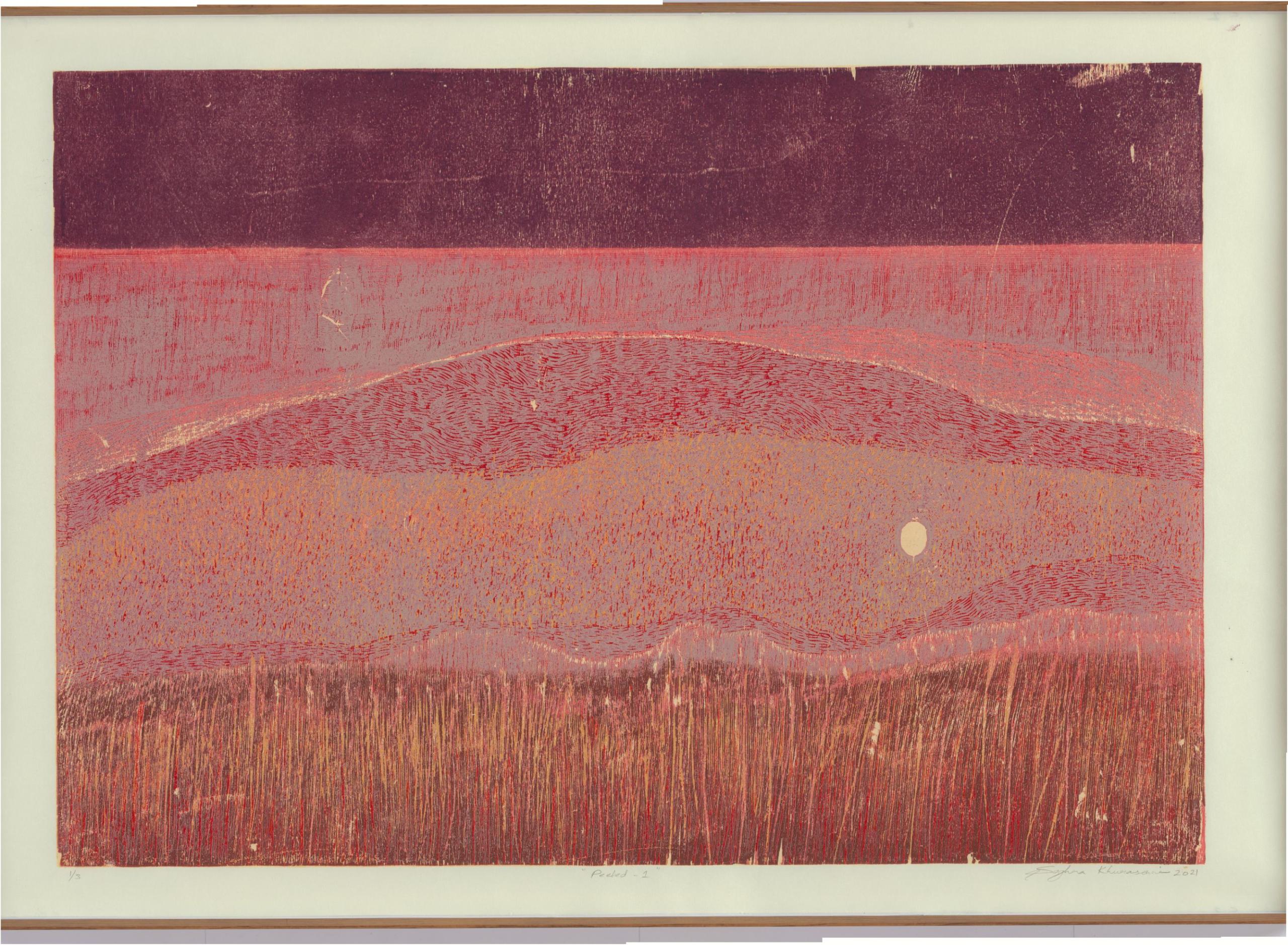 “When I was younger, I used to be confused by the word feminist, not sure it applied to me. Slowly when I learned more about the movement, I knew I’m a feminist because I stand up for women’s rights. I am inspired by the art of Shilpa Gupta, Shirin Nishad and Zarina Hashmi.”