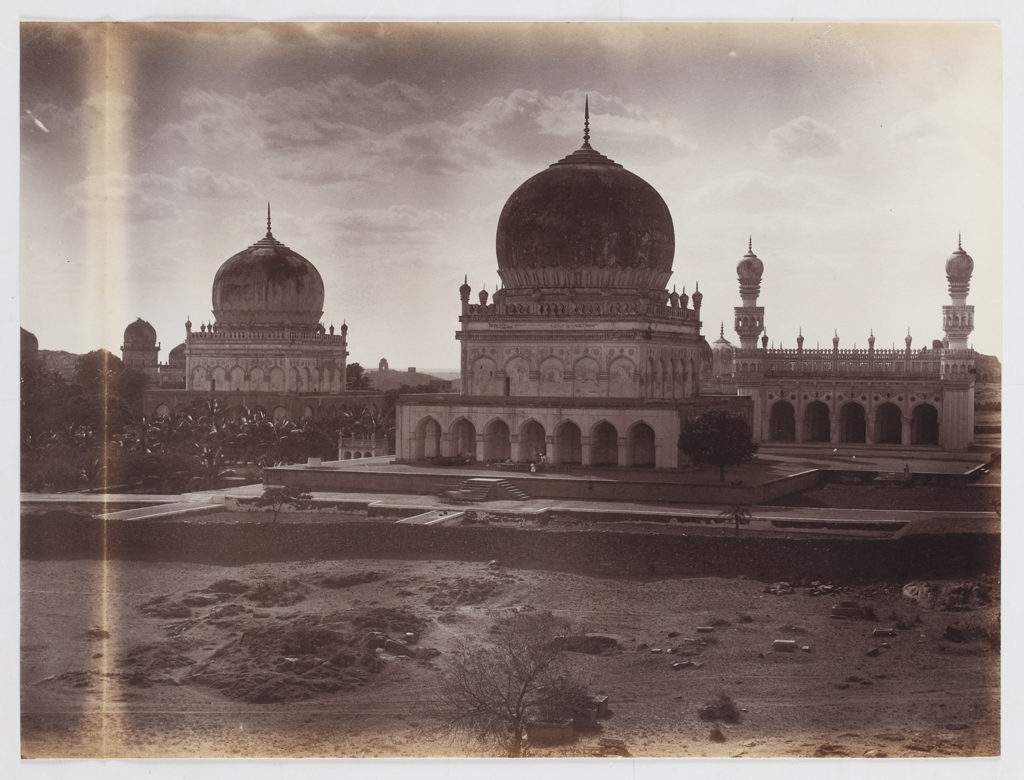 One of the most interesting aspects of Hyderabad, undeniably, is its language. Hyderabadis write in (standardised) Urdu, but don’t speak it. Our speech is very different; it is actually Dakhni, or at least whatever remains of it. I’ve been conducting heritage walks on my city’s history from almost two years, and nobody has an answer when I ask them why this is the case. 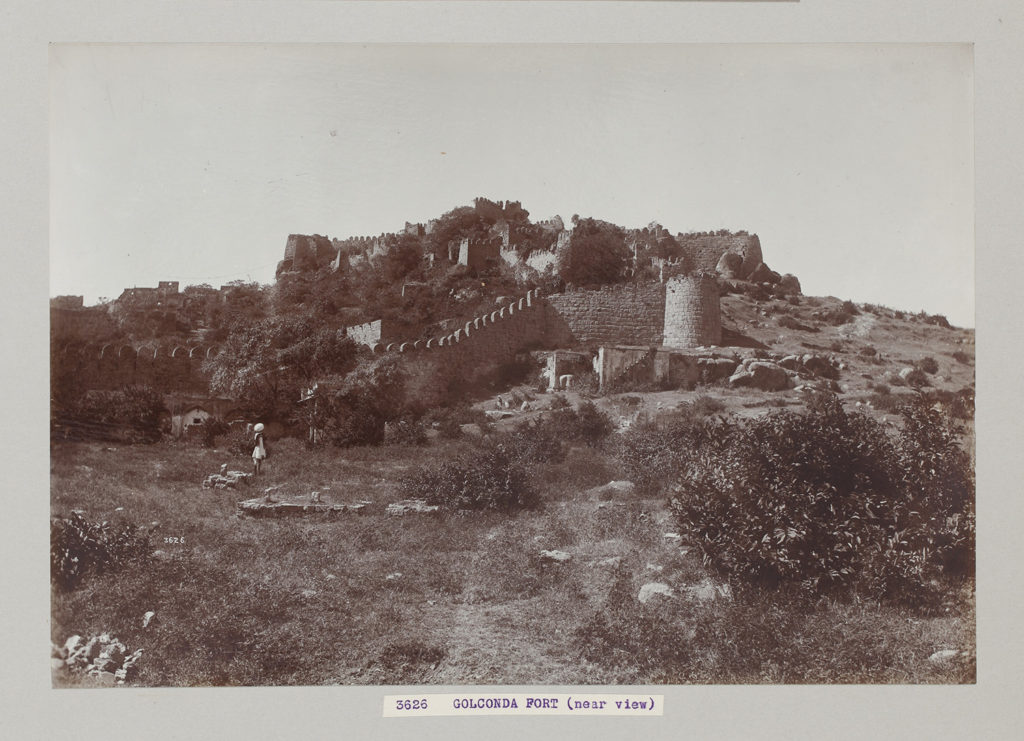 This dichotomy is indicative of one truth: we Hyderabadis have grown up imbibing a culture we’re not taught about. As unfortunate as it sounds and while it is something that needs course-correction, this also means that the seeds sown by the Qutb Shahi or Golconda kings, who founded Hyderabad (in 1591), were so strong that their Persian influences remain in the city’s cultural soil even today. It has survived conquests and other historic changes. 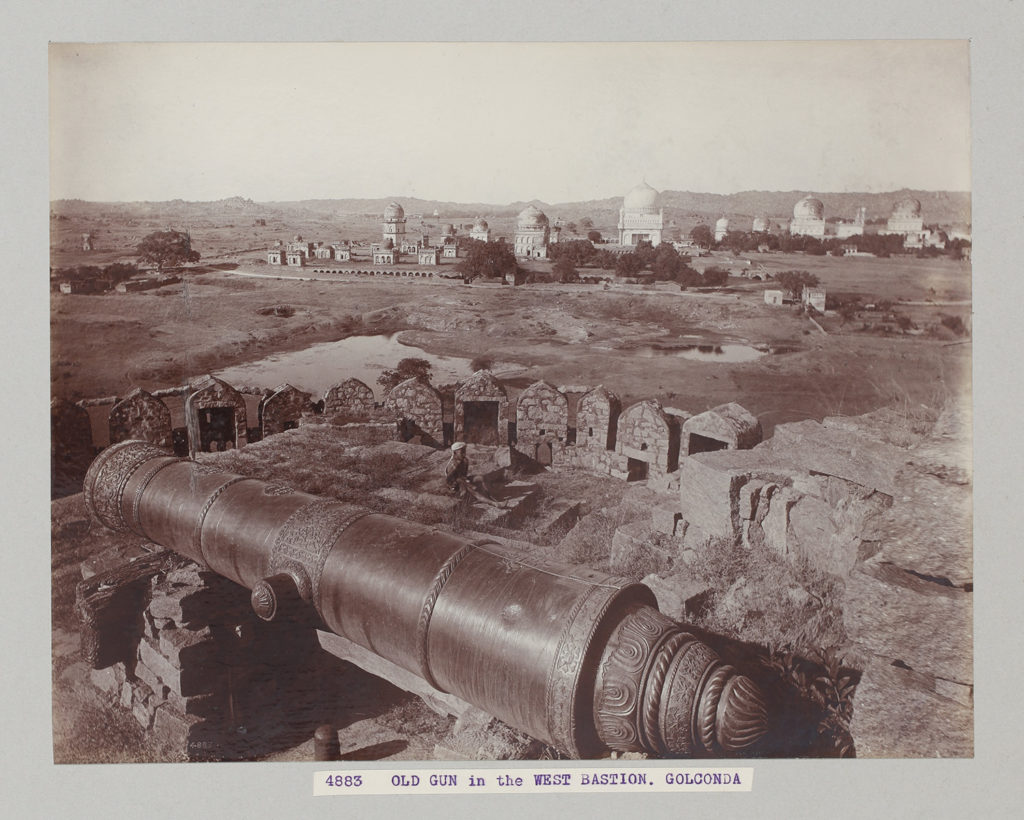 What we speak in parts of Hyderabad today could perhaps be considered a remnant of Dakhni, called ‘Old Urdu’ by historians like Haroon Khan Sherwani, who is considered to be an authority of the subject. Dakhni developed as a separate language in the Deccan between the 14th and 17 centuries, as a result of Persian getting mixed with Marathi, Hindi, Kannada and Telugu. It evolved into a language in its own right and thrived during the Qutb Shahi period (1518-1687). 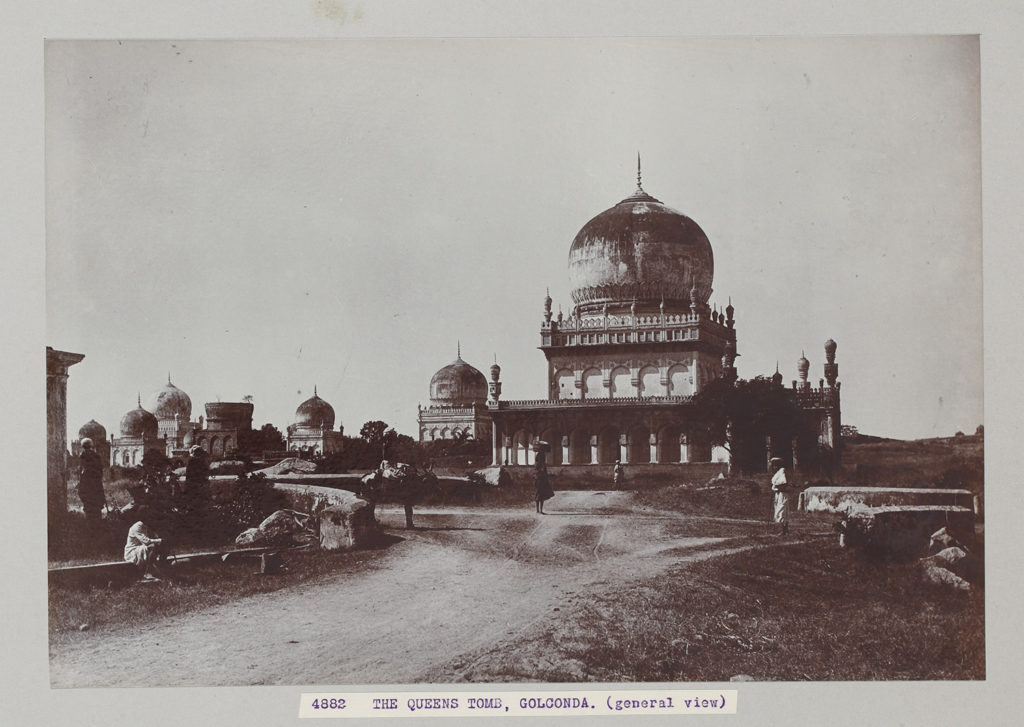 The language died a natural death after the Mughals, under Aurangzeb, conquered Hyderabad  in 1687. While the spoken language continued to exist in some form, the Urdu that developed in north India soon took over. Even in its much-reduced current form, Dakhni is one of the indelible remnants of the city’s Indo-Persian past.

“We need look beyond what has been written by historians like H K Sherwani,” believes Serish Nanisetti, journalist for the The Hindu and author most recently of Hyderabad/Bagnagar/Golconda: Rise and Fall of a Global Metropolis in Medieval India. “We know for a fact that Dakhni evolved as a separate language in the Deccan. The link of our language in Hyderabad today is with Dakhni and Urdu came much later.

He has a point. Dakhni began developing under the Persian Bahmani empire, which formed as a result of a rebellion in Mohammed Bin Tughlaq’s kingdom in 1347. Later, the Bahmani capital shifted from Gulbarga to Bidar, which lay at the intersection of Marathi-, Kannada- and Telugu-speaking lands. It was during this period that Dakhni developed as a composite language of the Deccan—separate and distinct from Urdu. 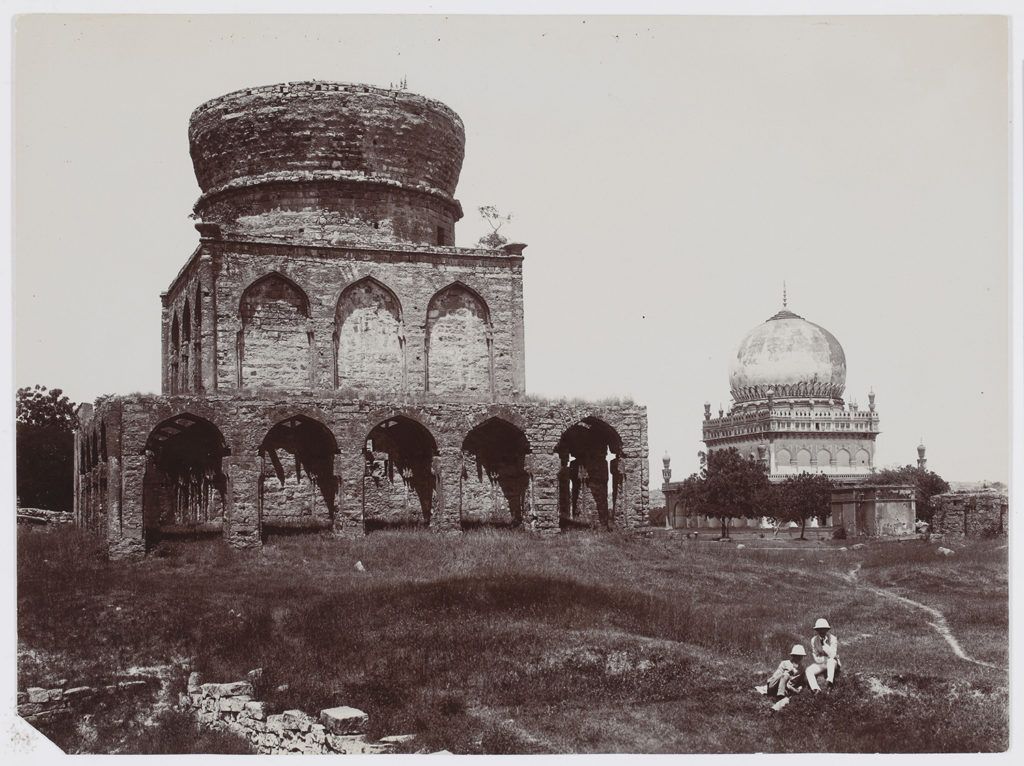 Sultan Quli Qutb Shah, who hailed from Hamdan in Persia (present-day Iran), had travelled to India in the second half of the 15th century and eventually began working for the last sovereign emperor of the Bahmanis in Bidar. After the Bahmani empire collapsed in 1518, Sultan Quli, then a governor, went on to become the king of the Qutb Shahi empire (as did four others in Bijapur, Bidar, Ahmednagar and Berar in the Deccan). 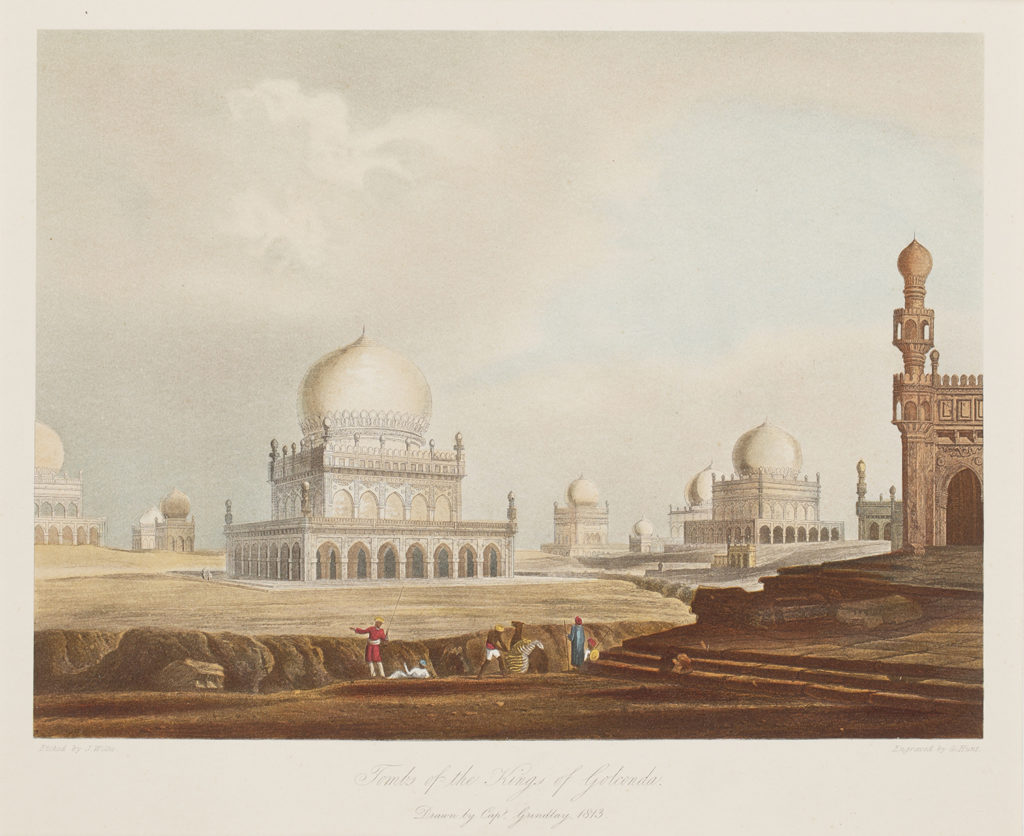 Tombs of the kings of Golconda, drawing by Captain Grindlay, etched by J Willis, engraved by G Hunt, 1813

Hyderabad was founded in 1591 by Sultan Quli’s grandson Mohammed Quli Qutb Shah, the fifth of the Qutb Shahi kings, who decided to move out of the historic Golconda fort, which operated as a walled city under his grandfather. The founder of Hyderabad was a poet too and one of the best known in Dakhni literature. He published works under the name ‘Kuliyat’. 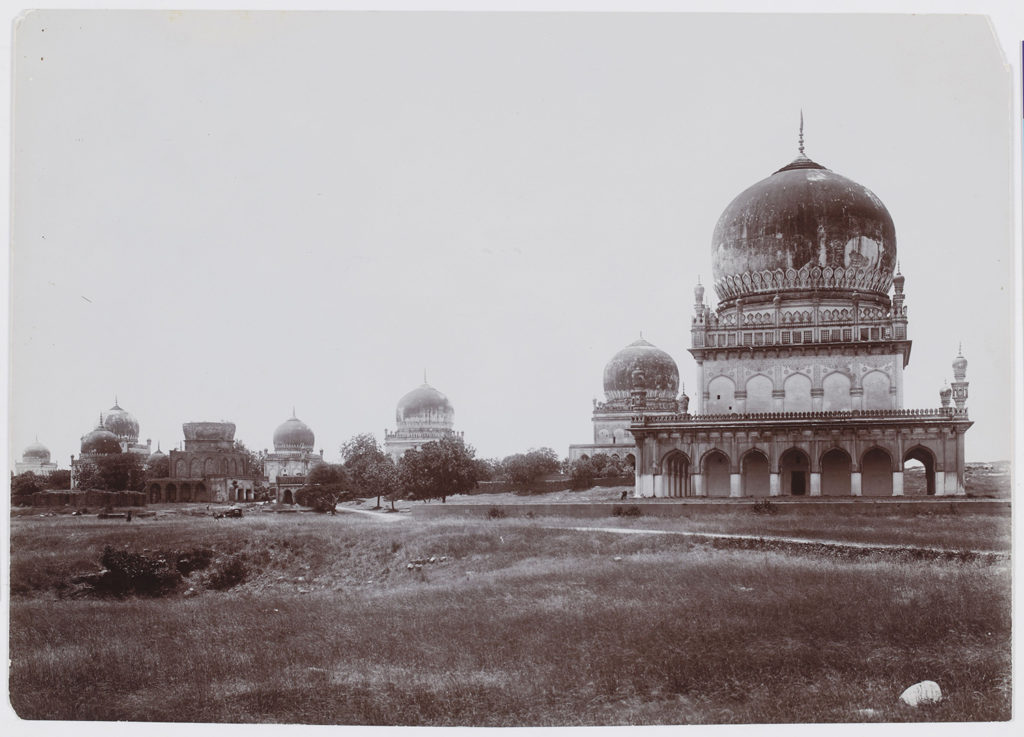 More than anything else, Sultan Quli brought to the region religious and cultural influences from the Bahmanis. The Qutb Shahi kings were orthodox Shia Muslims though they always ensured religious harmony in their kingdom, which today comprises primarily of the states of Telangana and AP.  Apart from Dakhni, the Qutb Shahis laid the ground for Shia Muslim customs, which form the core of Hyderabad’s culture even today. Shia Muslims are essentially followers of Imam Ali, who was the cousin and son-in-law of the Prophet Mohammed. Ali is also considered to be the rightful heir of the Prophet by the Shia sect. In the late 7th century, one of his sons, Imam Hussain, was supposedly killed in a battle with the Islamic caliphate. The death is believed to have taken place on Ashura, the 10th day of the Islamic month of Moharram. It is Hussain’s death that Shia Muslims mourn every year during Moharram. The mourning takes place in Ashurkhanas, which house battle standards or relics known as Alams from the battle of Karabala where Hussain was killed. 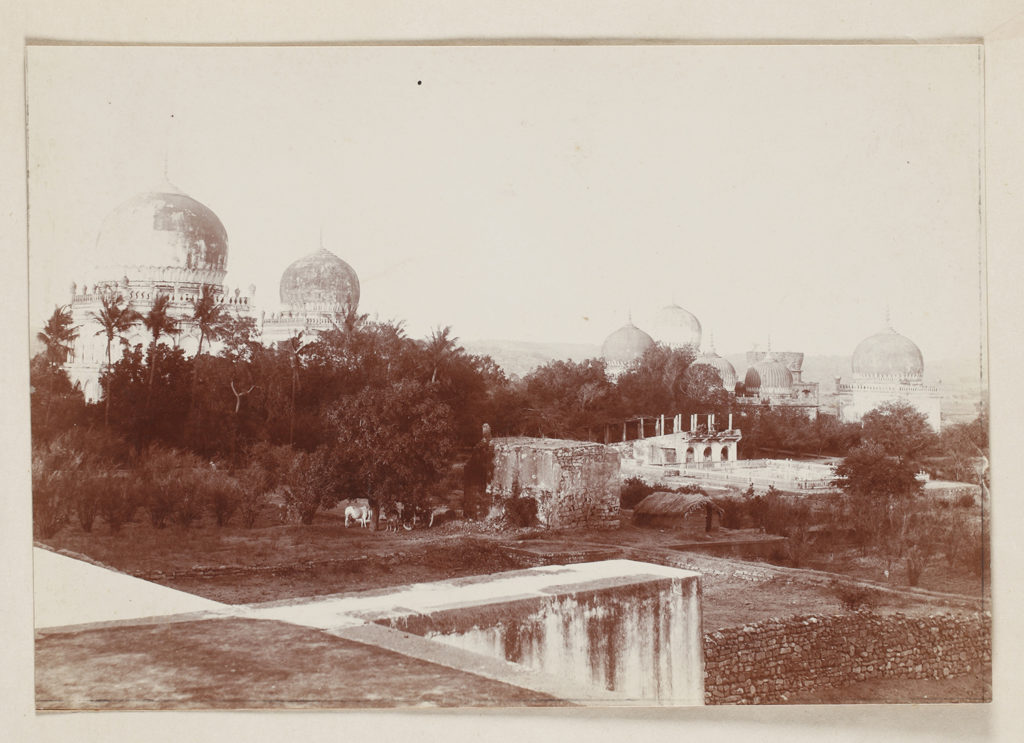 The importance of this tradition is immense, given that the Qutb Shahi dynasty built Ashurkhanas across their empire and appointed local Hindu families as caretakers at many of these mourning places. That led to even Hindus observing Moharram every year, a traditiona that continues even today. In parts of Telangana and Andhra Pradesh, Moharram is observed as Peerulu Pandaga or Festival of The Saints.

“Peerulu Pandaga wears a festive air in the two Telugu states, with the Alams being paraded in the streets during the Moharram procession,” points out Nanisetti. Hyderabad has a sizeable population of Muslims, around 20 lakh, of which around 10 per cent are Shias. Major processions are led on the last day of Moharram every year at the Qutb Shahi-era Ashurkhanas. Moreover, there is no restriction on women entering these places of mourning as is the custom is many mosques across India. 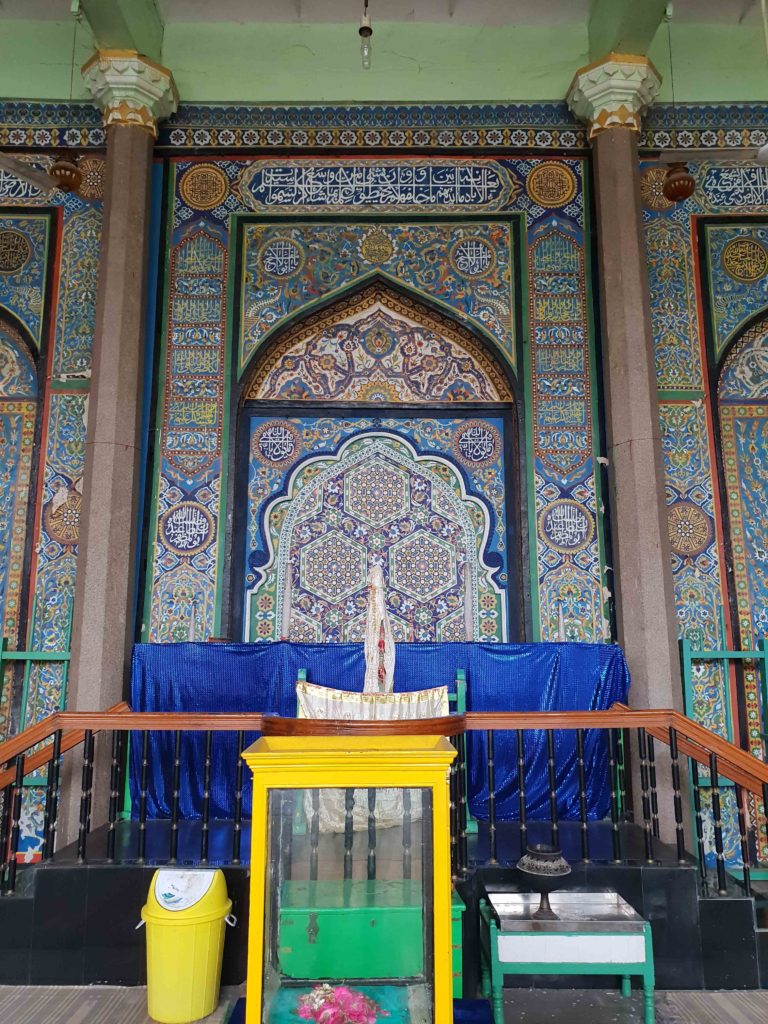 Central niche of the Badshahi Ashurkhana, photography by Yunus Lasania

And the most important place within that realm is the Badshahi Ashurkhana, located very close to the Charminar in the old city area. It was built by none other than Mohammed Quli Qutb Shah in 1593/4, few years after he founded Hyderabad. This alone shows how devout the Qutb Shahis were to their Shia faith. The delicate and intricate designs (notwithstanding the damage it suffered during the 1908 Musi river floods) in it are best examples of Indo-Persian architecture in the city.

“An Ashurkhana is a place where people are not looked at from the lens of caste, creed or religion. After constructing them, they were also given for upkeep to Muslims and Hindus, within which even those belonging to lower castes were made caretakers. Even today, Hindus recite elegies during Moharram. Elegies have also been written in Telugu,” says Murtuza Moosavi whose family has been taking care of the Badshahi Ashurkhana from 12 generations. 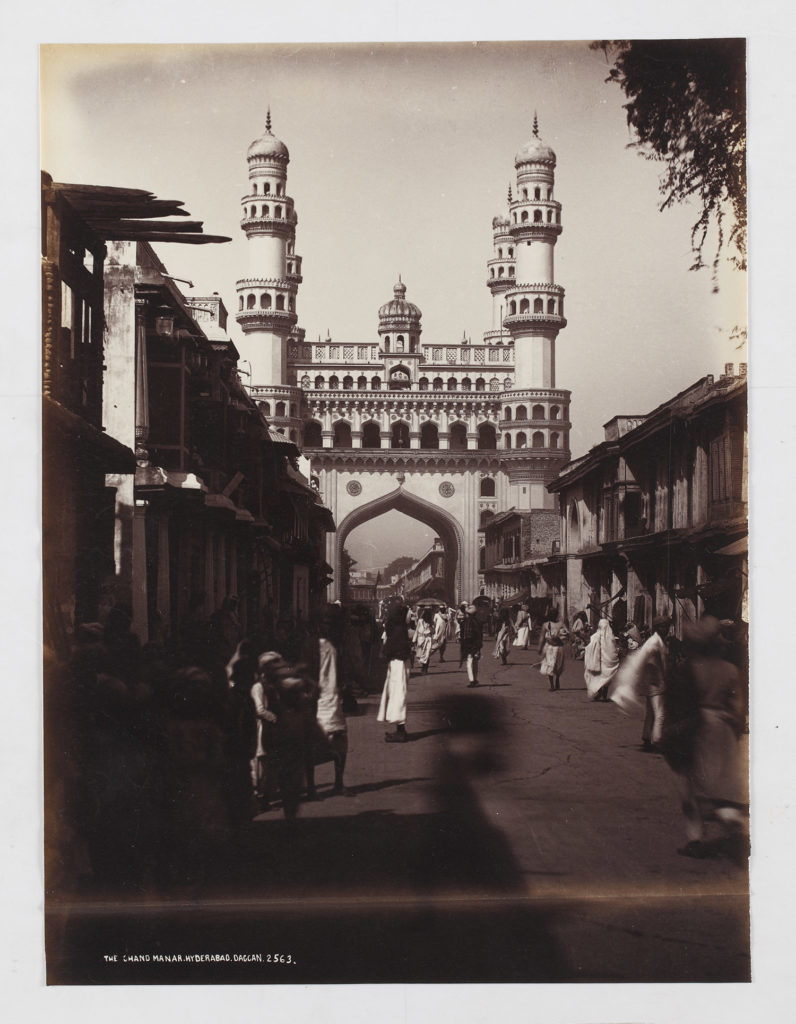 Unfortunately, the Badshahi Ashurkhana is not even half as famous as the historic Charminar, built to mark the foundation of Hyderabad. While the latter is most certainly a big touristy draw, the former is as historic. Both are part of the very few remaining monuments of the Qutb Shahi era, most of others were destroyed in the final siege by Aurangzeb in 1687. Besides these two, Char Kaman, Mecca Masjid, Golconda fort and the Qutb tombs (and other, lesser-known structures like mosques) are the only remaining examples of the fine Indo-Persian architecture of the era in Hyderabad today. 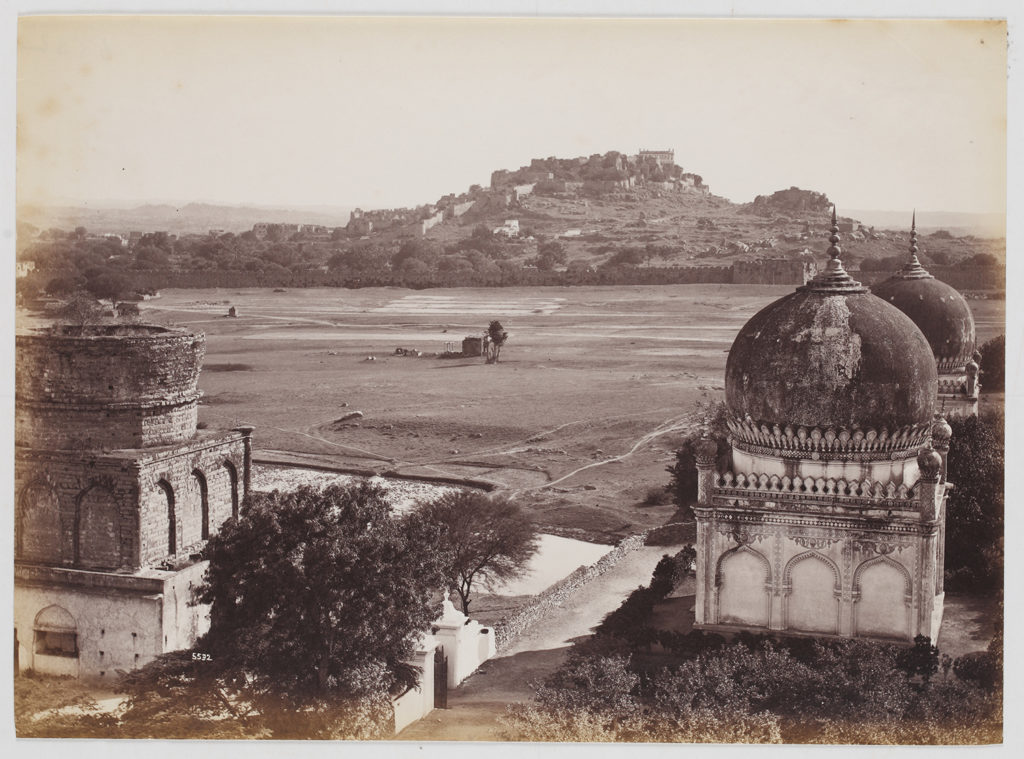 Having suffered immense damage over decades, the royal necropolis that is the Qutb Shahi Tombs is thankfully being restored by the Aga Khan Trust for Culture in partnership with the Telangana government. These tombs give us glimpses of the sophistication of Qutb Shahi architecture. The tomb of Ibrahim Qutb Shah (1550-80), the third ruler and father of Mohammed Quli, is one of the few that still has the original Persian tiles. A design quirk of the era too was the presence of pineapples motif dotting the tombs and Charminar. The fruit was considered exotic and a sign of hospitality. 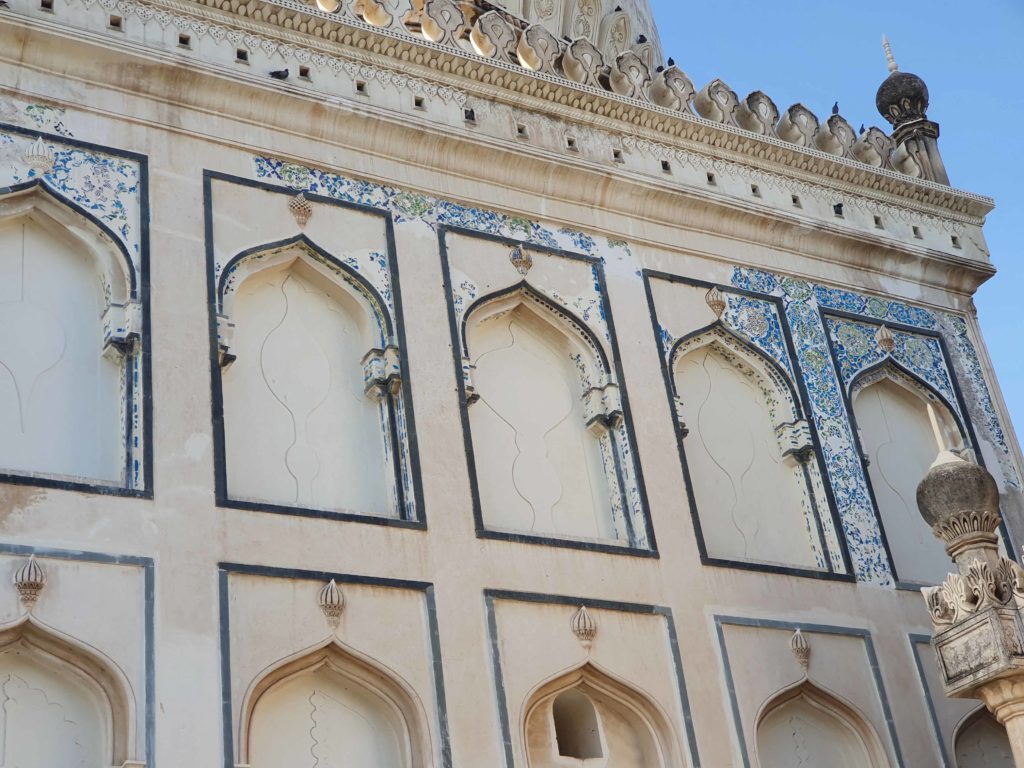 The remaining Persian tiles on the tomb of Ibrahim Qutb Shah, third of the Qutb Shahi kings, photograph by Yunus Lasania

Nanisetti notes that the Qutb Shahis brought a high-culture Persian aesthetic to the city. “The first city (Golconda fort) built by Sultan Quli had a grid pattern, whereas Indian cities were built on a circular pattern. Water also had a great role to play, as [the Qutb Shahis] brought hamams (Turkish baths) here.” While Hyderabad today is associated with the IT sector, which has contributed its own chrome-and-glass style to new neighbourhoods like HITEC City, the city’s unique flavour is derived from its Shia Islamic and Persian roots. This is something we Hyderabadis must understand and learn to cherish.

Having worked as a journalist for nearly seven years, Yunus Y. Lasania is currently the state correspondent for Andhra Pradesh and Telangana with Mint (HT Media). His profession has given him a unique perspective into the history of Hyderabad and also access to a lot of information that otherwise would not be easily available to the public. Yunus also conducts weekly heritage walks around the city to engage people with Hyderabad’s heritage. He also runs the Instagram page That Hyderabadi Boy and the blog and Instagram page The Hyderabad History Project, with a former colleague. Yunus is currently working on a book to document the oral history of ordinary people who lived in the erstwhile state of Hyderabad when it was annexed to India by the Indian army in 1948.