The Glorious Conquest of Seringapatam’, an engraving from 1802-03 by G Vendramini based on art by Robert Ker Porter from the Sarmaya collection

The year was 1799, the day was the 4th of May. Tipu Sultan’s formidable fortress at Srirangapatna — aka Seringapatam — had been breached after a month of relentless attacks by the British East India Company and their 50,000-strong army. This was the Fourth (and final) Anglo-Mysore War and Tipu’s forces were diminished, his kingdom halved, his riches dwindling. Led by Major General David Baird, the Siege of Srirangapatna would be Tipu’s last stand against the British, and he would not go down without a fight. As dusk fell, it is said, so did our great king.

A mezzotint engraving produced by John Vendramini, this triptych from the Sarmaya collection illustrates three episodes from this historic moment in time, which saw the final victory of the British over the Mysore state. Spanning nine feet across, it was created after a painting by Sir Robert Ker Porter, one of the first artists to depict the landmark episode. At the remarkable age of 23, and over a period of just six weeks, Ker Porter completed a massive panorama 120 feet across and covering 2,550 square feet of canvas! The vast, semi-circular painting, titled The Storming of Seringapatam, was presented to the public in the Great Room at the Lyceum in London in 1800.

Ker Porter had never visited India, and his work was based entirely on accounts gathered from participants of the war. The painting, however, stayed fairly true to details of architecture and costumes of the time, with some portraits of known British officials as well. Let’s take a closer look at the three panels on the engraving. 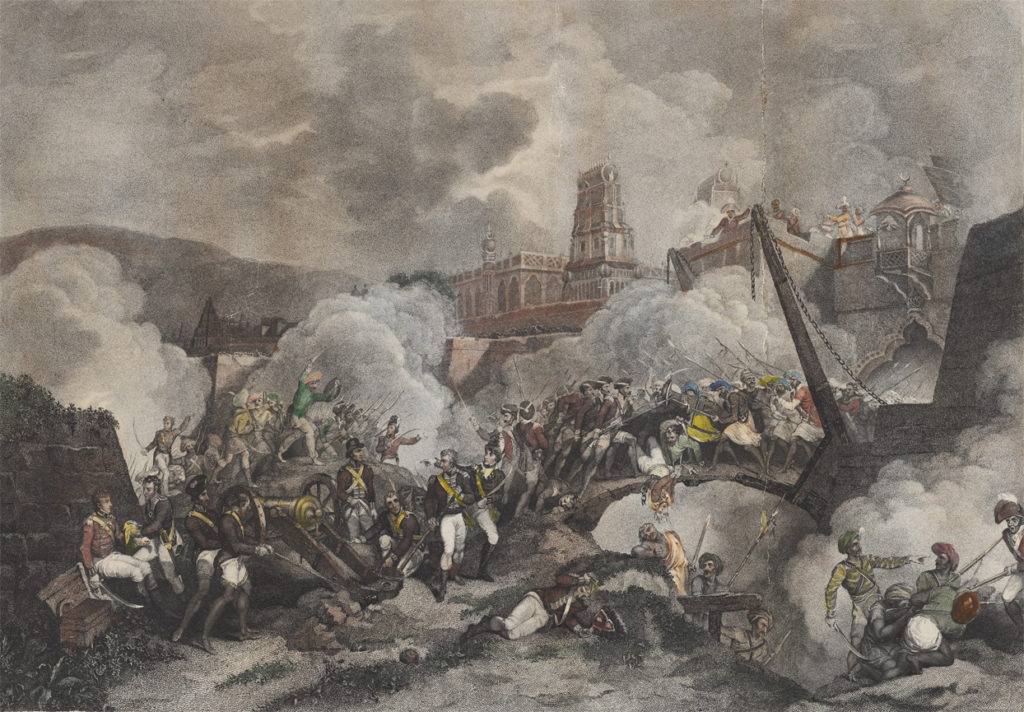 The first part of the triptych portrays the collapse of the main gate of the fort and English troops breaking through an arched bridge laid across a moat. As the soldiers advance, Tipu’s army charges forward armed with spears and swords to defend their kingdom; a few Englishmen are shown succumbing, and falling off the bridge. Atop the battlements you can see Tipu himself in a plumed pagdi, holding a spear and fronted by his ever-faithful French commander Chapuy (identified by his headgear) who is shouting orders to soldiers below.

To the extreme left, Captain Lardy of the regiment De Meuron is bandaging his wounded arm to rejoin the fight, and in the middle, we see Lieutenant Lalor hanging off the bridge, holding on to an Indian soldier for dear life as the latter raises his sword to strike. In the background, contrasting the clouds of dust and destruction below, rises the pyramidal beauty that is the Ranganathaswamy Temple gopuram, as well as parts of the royal palace.

‘The Storming of Seringapatam’ 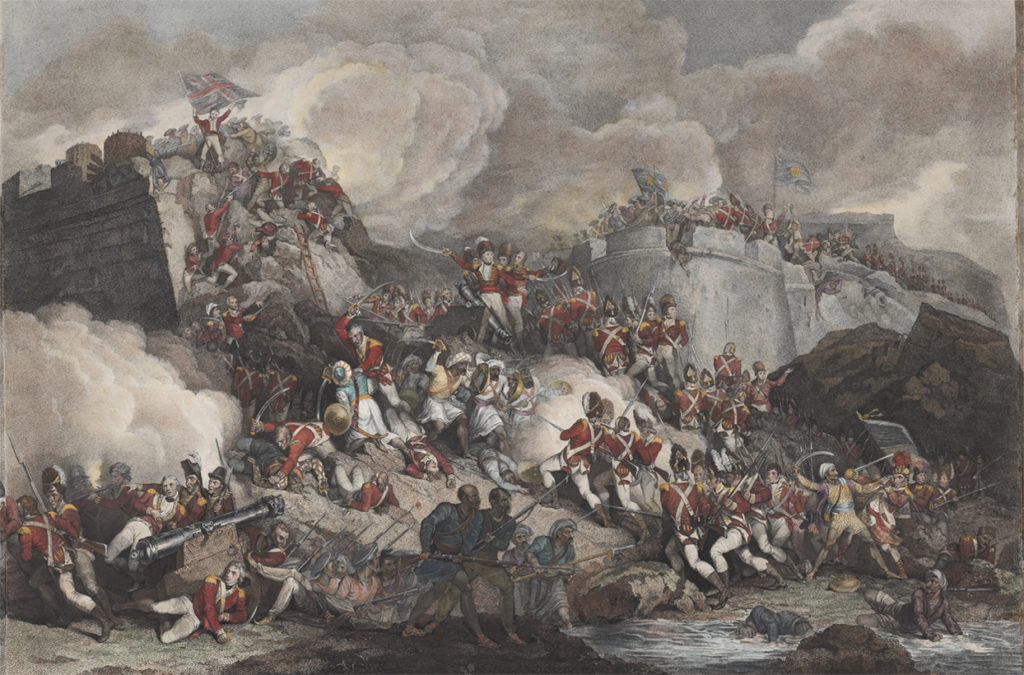 The urgency of war intensifies in the central panel, with more and more soldiers clashing and killing one another, spilling over fort walls and embankments. We can see General Baird urging on his troops, and an unfortunate Sergeant Graham who is shot by an Indian soldier just as he plants the British flag on the ramparts above.

Towards the bottom left of the engraving is a dying Captain Owen, falling against a cannon and being held up by a soldier pointing in horror towards the man who inflicted the wound. This is said to be the first part of the painting finished by Ker Porter. To the right we see a group of Tipu’s tiger grenadiers, whose leader has leapt forward and is engaged in dramatic one-on-one combat with a sergeant.

‘The Glorious Conquest of Seringapatam’ 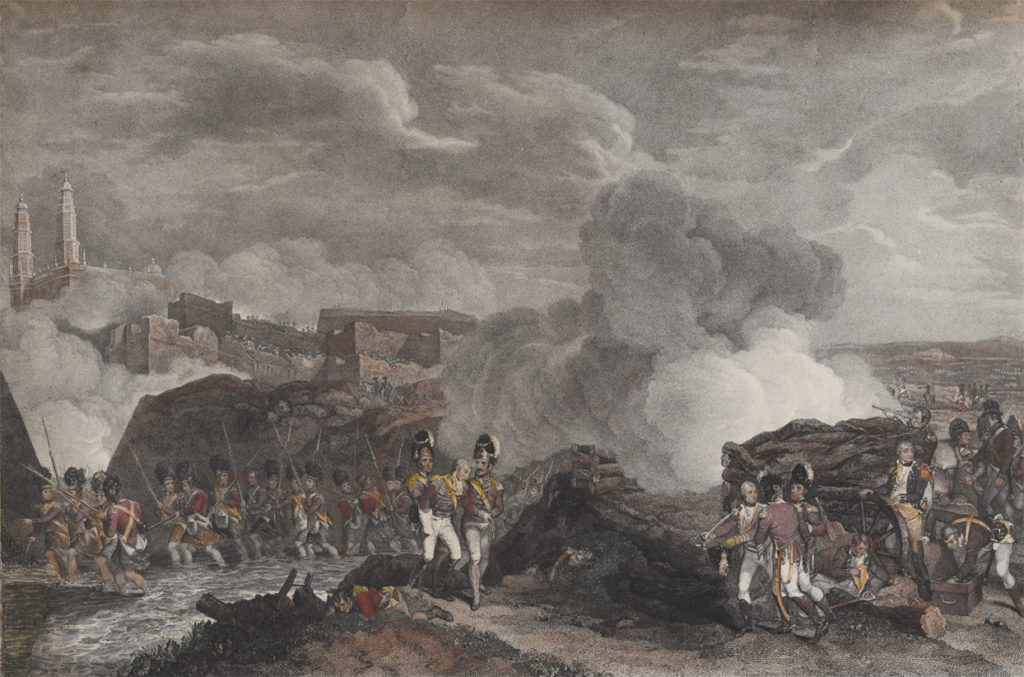 The action quietens a bit in the third panel, where soldiers can be seen advancing across a branch of the Cauvery while several soldiers lie dead or dying at the foot of the ramparts. A wounded Colonel Dunlop is being helped along by two grenadiers, and in the far-off distance to the right we glimpse the British on horseback.

Speaking about this stunning triptych, Sarmaya founder Paul Abraham, says, “The tumult of the moment and the intensity of the Tipu resistance is beautifully captured. Even the British seem to acknowledge the tenacity of their opponent, who was — albeit grudgingly — held in the highest esteem. The Siege of Srirangapatna captured the imagination for years to come, and gave Tipu a stature higher in death than in life.”