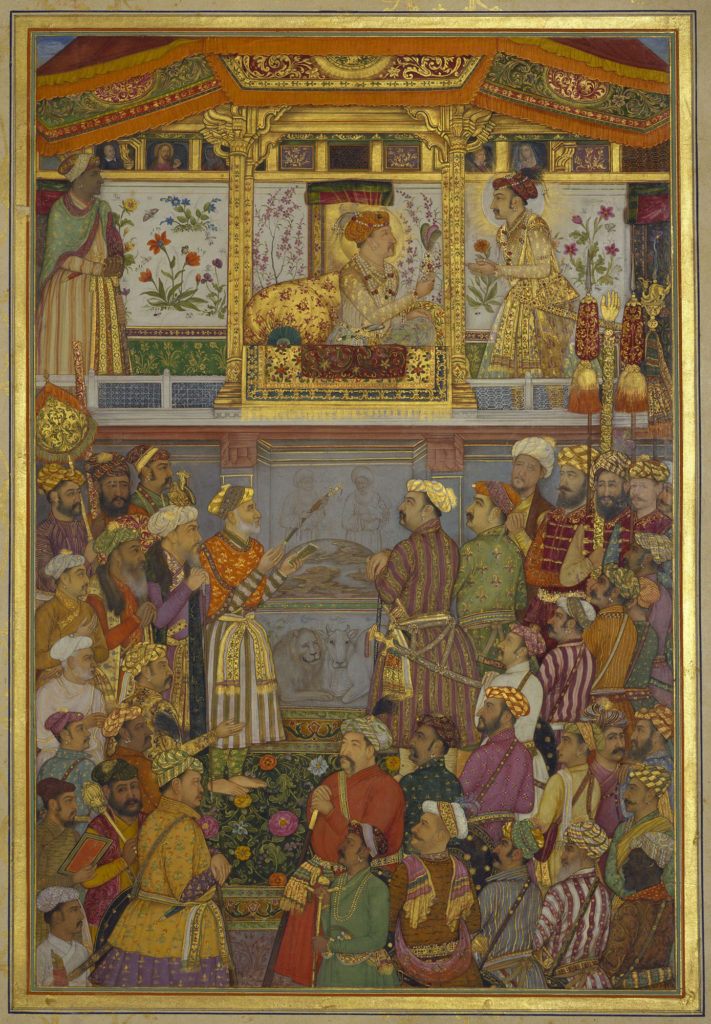 India has had a long and ancient connection with Christianity, dating back to as early as the first century CE. Saint Thomas the apostle is believed to have landed in Kerala sometime in 52 CE and established seven churches there, one of them still in use in the original location.

Up north, however, it was a different story.

Northern India first encountered Christianity courtesy the Mughal rulers and the ever-curious Mohammad Jalaluddin Akbar. For decades, the European powers had been at loggerheads with each other for trading control over the Indian coasts. By 1556, as Akbar ascended the Mughal throne, the Portuguese secured their position in the western coast of India. They established trading ports at Goa and Diu, made direct connections with the political centre at Lisbon and even imposed a fee on all Indian ships plying from the coast of Surat. Once the Portuguese began to feel secure about their position in India, Christian missionaries from the country started arriving here in large numbers. Dioceses were set up and missionaries from the newly founded Jesuit order were sent to Goa—partly to serve the spiritual needs of the growing European population there, but, more importantly, to engage in missionary activities.

Akbar took a particular interest in these Jesuits and invited them to Agra, thus setting in motion the wheels of a collaboration that would have a lasting impression on Mughal history. Abul Fazl, Akbar’s official chronicler, records in detail a letter the king sent to the Christian authorities in Goa: “I am sending Abdullah, my ambassador….and Dominic Perez, the interpreter, with the request that you will send me two learned Fathers and the books of Law, especially the Gospel, that I may know the law of its Excellence…:”

The Jesuits were elated at this invitation—and the opportunity to convert an emperor, no less!—and they set sail for Agra in 1580. The mission comprised of Father Rudolf Aquaviva, Father Monserrate and Brother Francis Henrique, who came bearing sumptuous gifts to the Mughal court, among which was the Polyglot Bible, a multi-volume set containing Greek, Aramaic, Hebrew and Latin translations of the holy book. Akbar engaged with the missionaries in intense philosophical and religious discussions as he did with men of other faiths every Thursday in the moonlit pillared halls of the Ibadat Khana in Fatehpur Sikri.

An illustration in the Akbar-nama depicts one such gathering with two Catholic priests seated next to the king, as other religious leaders sit around conversing and studying each-others’ books.

Akbar and the Jesuits’ by Narsingh, 1600-03, courtesy: The Chester Beatty Library, Dublin

Two more Christian missions followed and the priests began to spend many months in the Mughal court. Besides religious scriptures, they brought with them engravings and paintings with Christian themes and this is where the story got interesting. The Mughal rulers were deeply interested in this exciting genre that was so new to them and ordered the court artists to study and emulate the style prolifically. There begins the story of Mughal-Catholic ‘hybrid’ art.

Basawan, one of the court painters under Akbar, got especially interested in these European paintings and developed elements of linear perspective and chiaroscuro (the treatment of light and shade in art) in his own repertoire. In the example below, the distant landscape has been rendered smaller in size and has a hazy quality laid over it, giving the composition a sense of perspective. The use of chiaroscuro is also reflected in the handling of the drapery and the vegetation in the background where the three-dimensionality of the trees is brought out by darker application of colours on the edges.

The avenue opened by Akbar was explored further by his successors. Jahangir even commissioned murals to be painted with Christian themes in the architectural projects of his time. The fort at Agra originally had murals of Christian saints arranged on an upper register in a straight line on the wall just behind the throne. In fact, in a folio from the Padshah-nama, figures resembling saints look down from the wall as Jahangir presents his son Khurram aka Shah Jahan with a turban ornament. Additionally, the provenance of the lightly rendered grisaille wall painting below can be traced back to the imagery of Polyglot Bible. 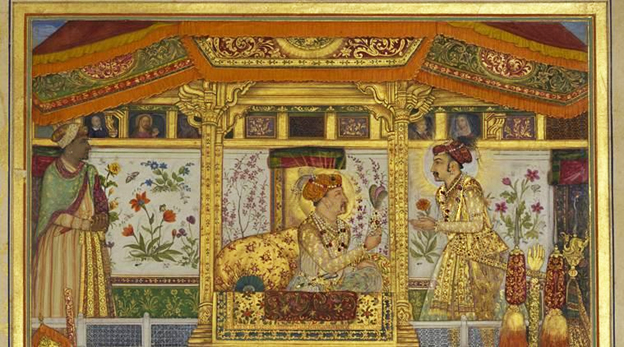 This painting (below) is one of the most excellent examples of the air of syncretism that pervaded the ateliers of the Mughal court. In the foreground, a woman feeds her infant child while a white cat sits solemnly next to them. Her facial features and the drapery that covers her clearly reference a European ideal. However, she lies on a carpet decorated with motifs inspired by Iranate and Mughal elements. 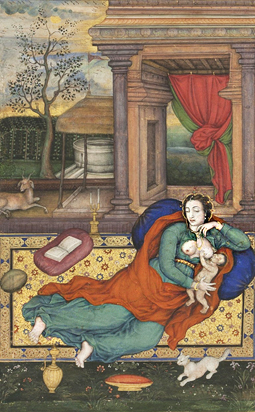 ‘Mother and Child’, attributed variously to Manohar and Basawan , folio from a Jahangir album, 1598, courtesy: San Diego Museum of Art

Things get curioser and curioser when we consider the background. Heavy European curtains inspired by Renaissance paintings hang from a door that looks like it would be right at home in a haveli. Beyond the threshold, the scene completely transforms to that of an idyllic Indian village—a goat, a well, a thatched roof and even a small kitchen garden with creepers is visible.

This is a dream painting—it’s located in two places but seems to belong nowhere.

The trend of creating Christian-themed works in the Mughal court continued for many generations after, and found patrons among later Mughal rulers like Mohammad Shah ‘Rangeela’ too. 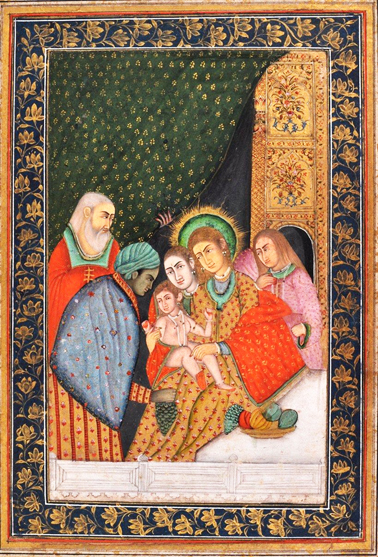 Towards the late 18th century, artists in other centres of art production such as Rajasthan and the Deccan also began to incorporate European techniques and produce works with Christian themes. It is worth mentioning here that no Christian missions were sent from Goa to the Deccani courts of Bijapur and Ahmednagar, which were closer to Goa than to Delhi or Agra. Yet somehow, these prints found their way into the hands and the imaginations of the Deccani artists. A characteristic feature of these Deccani works were the highly stylized natural landscapes and the wash-drawing technique using gold. 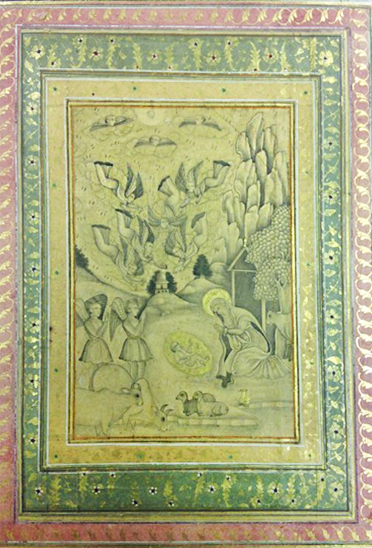 The viral spread of Christian influences over Indian art traditions from the north to the south is evidence of the power of art to step lightly into regions where angels might fear to tread. The central themes that run through the great biblical episodes, from the miraculous birth of Jesus to the dramatic calming of the storm to the ponderous last supper, all lend themselves powerfully to the creation of immortal art. There’s scope for so much pathos, grandeur and transcendence in these simple passages. From the north to the south, Indian artists who spoke no Greek, Latin and certainly no Aramaic understood and responded instinctively to the magnetic pull of an extraordinary story.