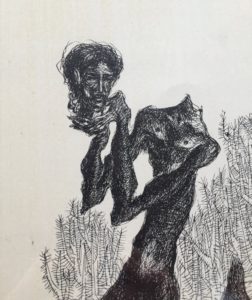 A small Dargah complex, situated to the immediate left of Jama Masjid’s Shahī Darwāza is painted green on one half and crimson on the other. The section painted green, houses the grave of Abul Qāsim Sabzawar, also popularly known as Hare Bhare Shāh. The colour green is on account his association with the wilderness. The section painted crimson houses the grave of Sarmad Shahid, the colour crimson being a solemn reminder of his martyrdom. On the face of it, the dargah appears like any other: situated at a busy intersection of the Mīna Bazaar, it receives a high number of devotees, the locals stopping by regularly to read the fātiha. In the evenings, the Sajjada Nashīn occupies his chamber inside the complex and is visited by those seeking all forms of supernatural solutions. However, the mystic interred inside it is considered nothing short of a ‘Mansur-i Sanī’ (Second Mansur) and his life, makes him one of the most enigmatic figures ever to be buried in the city of Delhi. 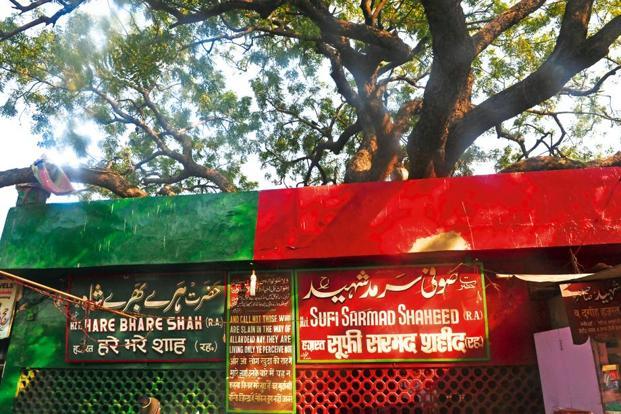 Sarmad was a poet of considerable repute[1], his Rubaiyat which contains some 350 quatrains is distinguished by its phenomenal iconoclasm. The overall impression is of an ecstatic and utterly unpredictable Dervish who has a deep-seated disdain for all kinds of organized religion.

In expressing contempt for organized religions, he urges the reader to draw inspiration from Satan,

Sarmad don’t talk of Kabba or the temple

Learn from Satan, the ways of devotion

Make one Qibla and prostate not elsewhere

In another quatrain, even the Sufi’s cloak is a source of shame:

This cloak of pashmina[3]  which hides a hundred sins

Never again would I wear it, it brings shame

Another couplet attributed to his lover and poetical protégé, Abhay Chand runs as follows:

A follower of thy way, a guardian of thy path

I am a Rabbi, an infidel, not a Muslim 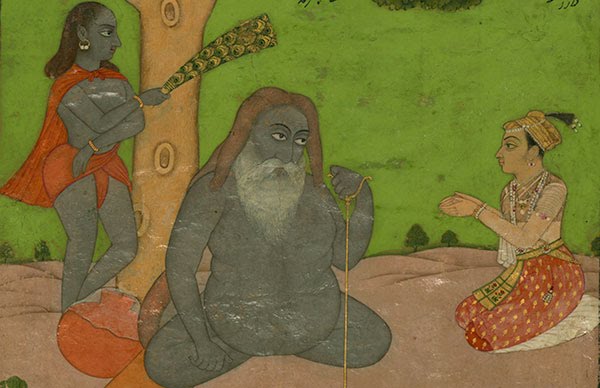 Sarmad and Dara Shikoh in a 17th-century manuscript, courtesy The Walters Art Museum

Sher Khan Lodi, who was in all likelihood attached to the Mughal court, [5]was a man of a reason, a partisan of Aurangzeb and most certainly no admirer of Sarmad. In the Mirat ul Khayāl[6], Sarmad is not just a naked deviant, he is an unmitigated abomination. Lodi describes how Sarmad wandered naked, urinating and defecating in full public view (baul wa ghayit rā  dar nazar-i khalq Kardī  ). He was originally an Armenian from the region of Europe (āslsh āz fīrangistān āst o ārmīnī bud) a wealthy trader(Māl-i farāwān kard āward),at the port of Thatta  he fell miserably in love with a boy which led him to cast away all reason and intellect, the most precious treasures of humanity ( rās ul māl-i khazīna bashryat āst). Thereafter Sarmad gave away all he had, including his clothes. When wandering as a madman he arrived in Delhi, Dara who had a penchant for madmen(majānīn) sought him out , the twain hit it of instantly and are happy for a while until suddenly, the times change( ruzgar tarah-i d  īgar āndākht) and Aurangzeb comes to power,  restoring splendor to kingship( jahāndārī āz faiz Alamgīr muzaiyan gardid). The traditions of Akbar and Jahangir, the innovations of Dara are done away with, the awe of the sharia cleanses the land of all un-Islamic execrations and the naked don the cloak of virtue.[7] However Sarmad does not change his ways and is thereby condemned to death, the chief charge against him being a quatrain which distorted the concept of the prophet’s ascent to the heavens.

The one to whom reality revealed itself

Became vaster than the vast skies

The Mullah says Mohammad went to the sky

Sarmad says the skies descended to him

In spite of his antipathy towards Sarmad, Lodi gives us a brief glimpse into Sarmad’s legend probably prevalent at the time. When he is about to be executed Sarmad refuses to close his eyes, staring the executioner in his face, he smiles and says “In whichever form you come, I will recognize you” (tu har suratī kih mīāyī  man tu rā  mīshanāsam), then after a  maudlin recitation of couplets, he finally meets his end.

For contemporaneous Mughal chroniclers however, Sarmad seems not to exist. A fact bemoaned by Maulana Azad in his seminal essay, Sarmad Shahīd (1910). The name of Sarmad, according to Azad had been ‘carefully expunged’ from Mughal sources, the writers apparently preferring that ‘the blood of this martyr should not stain the illuminations along the margins of their books of history and poetry’.

Azad’s essay is a sophisticated treatment of the subject; he dwelt extensively on the relationship between Sarmad and his boy lover (earthly love being a stepping stone to the divine), Sarmad’s mystical state of mind and his transcendence of the distinction between Islam and Kufr (infidelity). Preferring Dara Shikoh’s indulgence towards the insane over Alamgir’s coterie of the rational and the sane, Azad condemns Aurangzeb for what is considered by him, a political execution in the guise of religious heresy, on account of Sarmad’s proximity to Dara Shikoh.

Modern writings[8] on Sarmad have arrived at widely divergent conclusions regarding his religious persuasions. For some he always remained a Jew whereas on the other hand of the spectrum, for some he was a mystic without any religious affiliation.

Muhammad Iqbal, the current Pir Zada, a generously proportioned gentleman with a pleasant demeanor, insists that Hazrat Sarmad prayed five times a day but in private. He draws my attention to an incident from the Tazkira:

Sarmad is convinced by certain yaran-i tariqat  to pray with them at the Jama Masjid. A piece of cloth was wrapped around his waist and they proceed to join the congregation. However, Sarmad withdrew at the very second raqat, after the namaz, when  he is questioned about his behavior, we  behold  Sarmad teaching us the correct form and substance of prayer,

Until the presence of god does not pervade your heart, it is not prayer but an insult to it

The small complex painted green on one half and crimson on the other, houses the remains of a man raised by providence to eternal fame, a humbler of monarchs, a religious preceptor, who along with his own spiritual mentor not only grace the surroundings but are actually responsible for its very existence.

The above is an excerpt from a research paper written by Vijay Deep Nagar, a Sarmaya reader with a passion for history and Urdu and Persian poetry. In his own words, he has “spent a good part of my undergraduate years reading about Delhi and discovering it through nocturnal cycling excursions”.

[1]  The same can be concluded by the inclusion of his poetry in all the Poetical Tazkiras discussed in this paper.

[3] Pashmina being a finer wool, unlike the coarse wool traditionally associated with Sufis.

[5] Marshall mentions that Lodi’s father had been in the service of Shuja, the second son of Aurangzeb.

[6]  A pdf of the same, published in Bombay 1906, is available at the research library of the Iran Culture House.

[7] Some of the expressions used by Lodi are deliciously colorful, we learn how, from the awe of the lash of justice( az haibat-i durra-i adl) the foreheads of bindi sporting infidel beauties are rendered fit for namaz(khal-i kafir kish khuban dar mihrab-abru musta’id –i namaz gardiid) and how the blood letting coquetry of the idols/beauties(ghamza-i khun riz-i butan) was buried in the manner of a Sufi’s chillah( chillah nashiin shud).

[8] See Identity of a Mystic: The Case of Sarmad by Nathan Katz for a summary of the same.