In Indian cultures, there’s a plasticity to the ways in which goddesses (and gods) are depicted or worshipped across seasons, regions and communities. The mighty Mother Goddess is described in the Rig Veda as the creator as well as the destroyer of all known universes. Within her exists a duality, and just as her benevolent and nurturing aspects are depicted in many forms, so are her fierce and terrifying forms.

Maha Kali by Dulari Devi from the Sarmaya collection

For instance, Goddess Kali is almost always depicted as the violent avatar of Durga, the bringer of misfortune, destitution, disease, calamity and death. Her worship focuses on pacifying her wrath and satiating her bloodlust. Kali is believed to represent the instincts of our subconscious and unconscious selves. She alone possesses the power to destroy our (inner) demons.

A procession for Goddess Kali, 19th century engraving from the Sarmaya collection

The origin myth of Goddess Kali differs from region to region. In central and eastern India, she is venerated as an incarnation of Durga; however, followers of Shaktism in the same region celebrate her as an incarnation of Sati. In parts of southern India, she is Bhadrakali, the dark form of Bhagavathy. And some worship her simply as Mahadevi, the ultimate mother goddess.

The earliest written references to Kali appear around 600 CE. Here she is described to exist in the periphery of society or in battlefields. She is invoked in several battles and appears to aid Durga in killing demons like Chanda and Munda. Between 6th-13th century, she is described to be worshipped by tribals and criminals, those outcast from ‘civilised’ society. Temples to Kali were typically built outside the boundaries of villages or near cremation grounds.

Kali is usually shown as dark-skinned and having four arms (or eight or ten), that carry a sword, a sickle, a severed head and a cup filled with blood. She is naked except for a garland of skulls and a skirt made from the severed forearms of those she has killed. In earlier depictions, she had a third eye but this is missing in more recent iconography. Kali is pictured standing on top of Lord Shiva, proving her supremacy over all devas and asuras.

Idol car at Chamundi, Mysore, 1855, by William Henry Pigou from the Sarmaya collection

As the embodiment of subconscious and unconscious energies, Kali was and is celebrated in her own right, separate from Durga. As she came to be revered across the country, her legend appropriated those of local goddesses. An example of this is Chamundi, considered to be the protector of the Chamundi Hills in present-day Mysore. She is described as the slayer of Mahishasura in Kannada folk songs Bettada Chamundi, origin and author of which are unknown. The songs are performed even today by musicians and dancers from the Kuruba Gowda community. 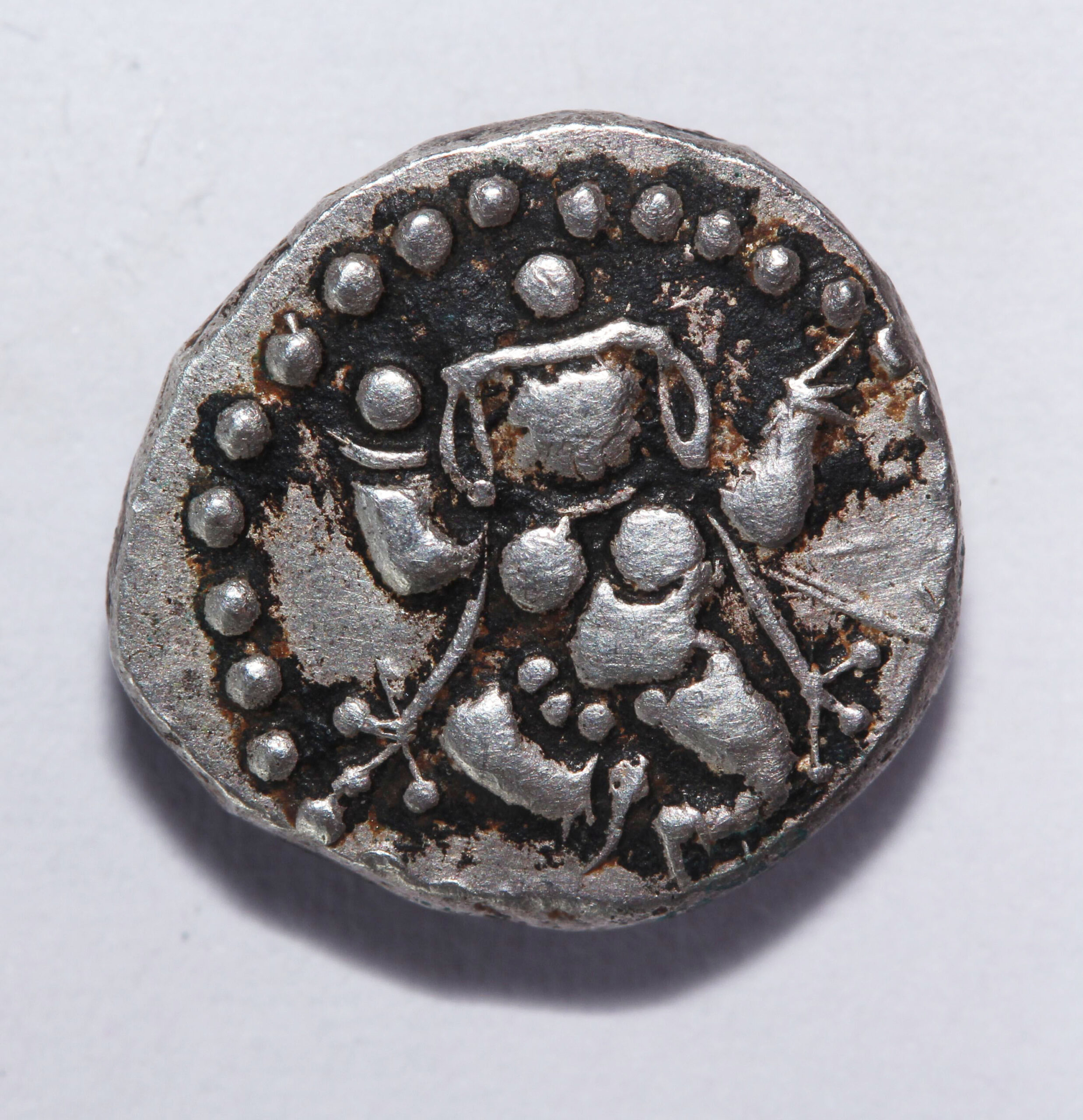 Even though Chamundi is regarded as the slayer of Mahishasura, the song mentions this battle only in passing. It focuses more on the slaying of the demon Raktabija, who can reincarnate and clone himself endlessly from each drop of his blood spilled on the earth. Uttanahalli, the sister of Chamundi, wraps her tongue around the entire universe to prevent the demon’s blood from fall on the ground. This helps Chamundi destroy Raktabija.

According to Devi Mahatmya, an important 5-6th Century text on Durga, the Goddess calls upon Kali to help her kill Mahishasura and his army of demons. Among them is the demon Raktabija, whom Kali kills by drinking every last drop of his blood. This narrative establishes Chamundi as an avatar or descendant of Kali. In terms of iconography, she is almost identical to Kali, with the key difference being that Chamundi is depicted standing on a corpse and not on Shiva. 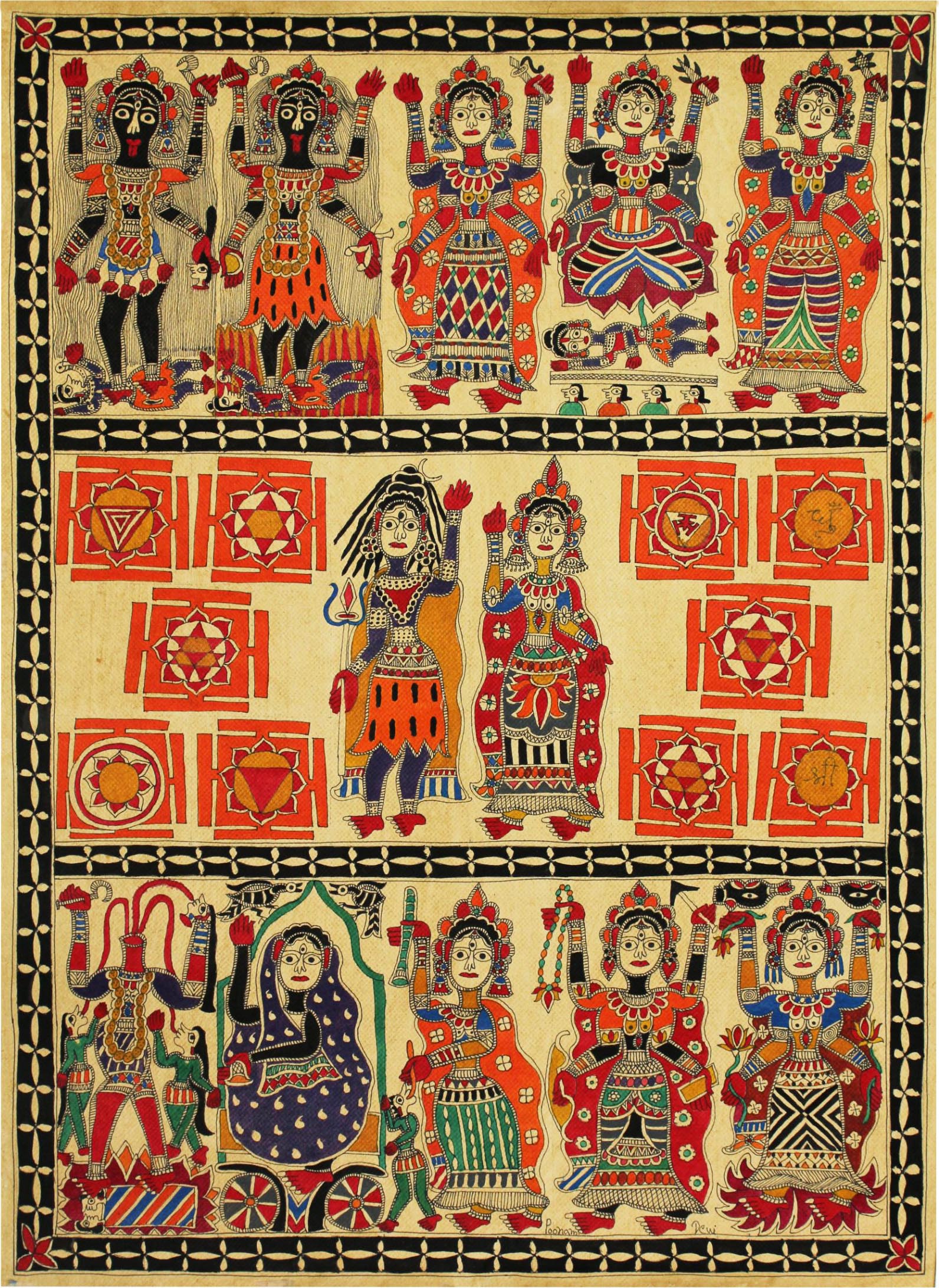 Dasa Mahavidyas by Poonam Devi from the Sarmaya collection

In Tantrism and Shaktism, several forms of the dark, violent and angry goddesses are grouped together as the ten Mahavidyas or goddesses of wisdom. Together, they embody ‘Shakti’, ie the full power of the divine feminine. Almost all the Mahavidyas are violent manifestations of the mother goddess. They are described as fond of blood and battle, as is evident in the iconography of five goddesses: Kali, Tara, Bhairavi, Chinnamasta and Dhumavati.

Goddess Tara is the second in this grouping. Her origins can be traced to Mahayana Buddhism and Tantric Buddhism, where she is regarded as the mother of Akshobhya aka the Buddha. She is the goddess of wisdom and knowledge, showcased as a calm and beautiful figure. Her violent side is Ugra-Tara, who unleashes her wrath on any believers who defy or disrespect her. In her iconography, Ugra-Tara is like Kali. She is dark in complexion with multiple arms carrying weapons, wearing a skull garland and tiger skin skirt. The main difference is the knot on Ugra-Tara’s head where the figure of Akshobhya appears.

Goddesses Kaali and Tara, ink and pigment on paper by Krishnanand Jha from the Sarmaya collection

In Hindu Tantra, Tara is primarily a liminal symbol. She represents those who are branded as dangerous and polluted by society. Tara ‘kills’ her devotees, meaning she destroys the falseness within them. When she severs a head, it is a symbolic act by which she strengthens the mind, allowing it to focus and succeed. The garland of corpses she wears represent the limitations of an ignorant mind. In her iconography Tara is identical to Kali; she even stands on the corpse of Lord Shiva, making it difficult to differentiate between the two. In some early renditions she was depicted as a mother figure nursing a baby Shiva. In both instances, she is displaying her dominance over him.

An early reference to the attributes of Bhairavi are found in the 9th-Century Sanskrit hymns Sarada Tilaka, which is a compilation of mantras by tantric priests. She is described as a beauty, one whose skin shines with the light of a thousand suns. Bhairavi oversees and empowers Brahma, Vishnu and Mahesh. Only at the very end of the hymn do we glimpse her fierce side, as the one who can dissolve the universe in a fire. In contemporary society however, devotees revere her powers of destruction, not creation.

Bhairavi is an embodiment of all our most self-destructive qualities, our worst vices. The more these are eschewed, the weaker her powers get. In art, Bhairavi is often depicted seated on a lotus holding rosary beads and a book. But on occasion, she is a wrathful naked goddess, wielding weapons and a cup of blood. Older paintings of Bhairavi, present in the collection of the National Museum in Delhi, show her engaged in intercourse with Shiva, holding a sword and a sickle in her hands.

Chinnamasta and Dhumavati, the dreaded two

Chinnamastra and Dhumavati are not worshipped except as part of the ten Mahavidyas. This maybe because of their reputation as deities who are quick to anger and quicker to curse. Written texts detailing their origin or attributes are rare. 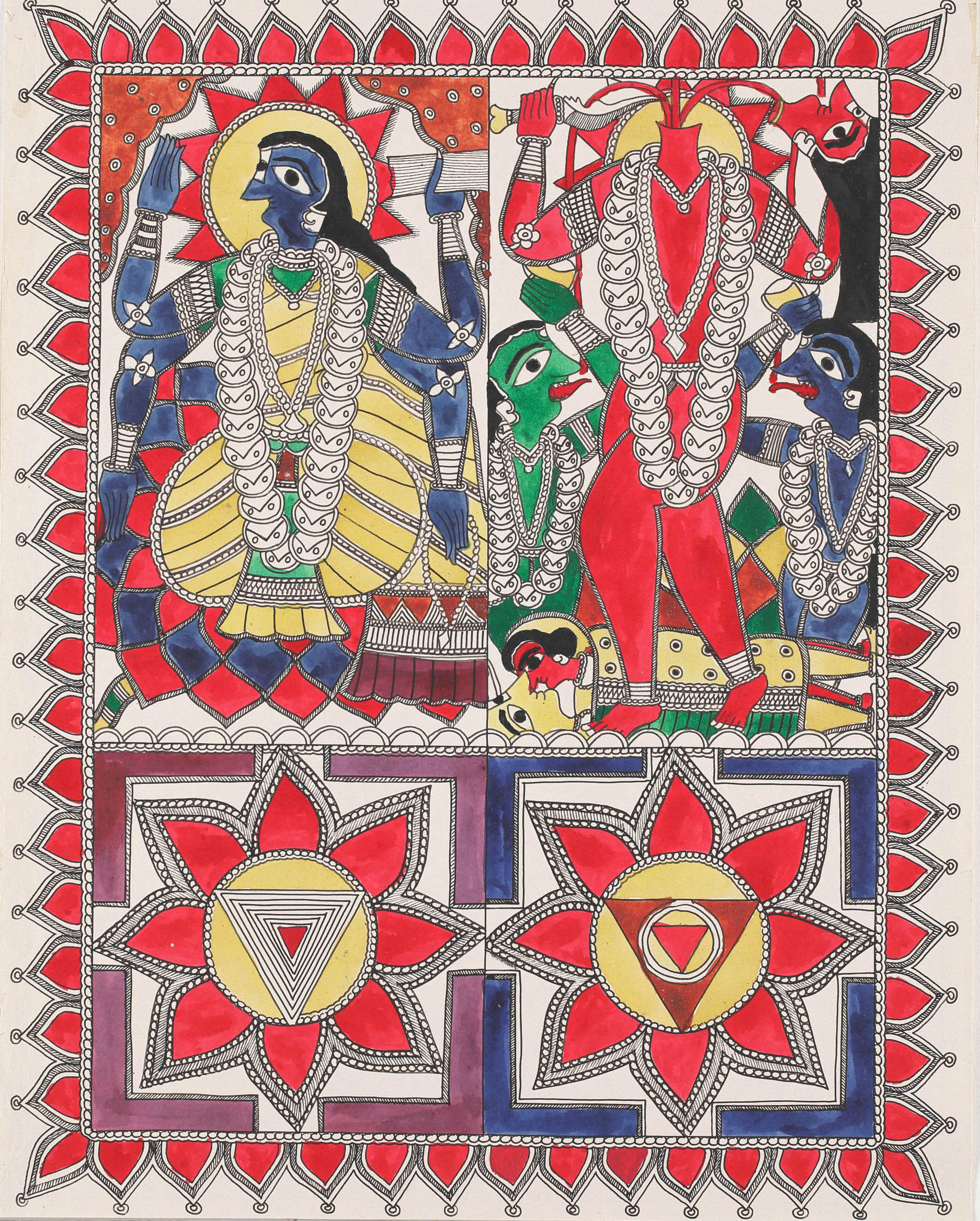 Bhairavi and Chinnamasta by Krishnanand Jha from the Sarmaya collection

Chinnamasta, like Tara, is shared between Hindu and Buddhist traditions. She depicts the central ideology of the dark goddesses: without death, there can be no life. This is why, although Chinnamasta is shown without a head, she is also pictured on top of the figures Rati and Kama, the god of love, making love. Streams of blood flow from her severed head and are caught in the open mouths of two attendants. Her myth states that the goddess feeds them on her blood when they beg her for food and nourishment.

The origins and history of the goddess are obscure but some link her with Lajjagauri, a deity whose figurines also showcase the headless, nude female form. 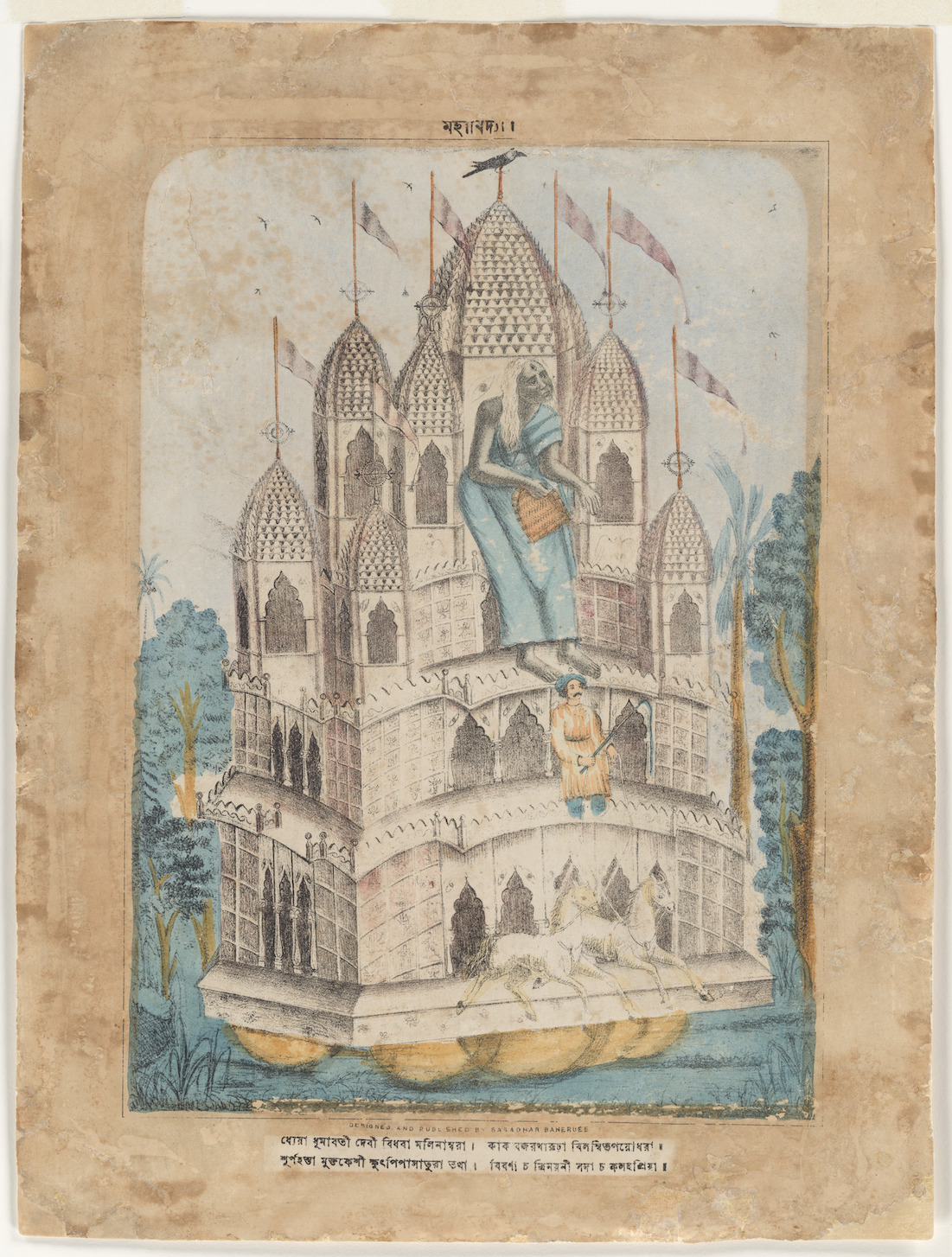 Goddess Dhumavati by Sasadhar Banarjee, ca. 1875–85 from the Met Museum collection — click on image for source

Dhumavati, like Tara and Kali, is worshipped by communities treated as social outcastes, like widows, beggars, and those suffering from disease. She is considered that rare thing: an inauspicious goddess. She is the bringer of bad luck and the repeller of wealth, whose counterpart in Hinduism is the goddess Alakshmi. Dhumavati’s hunger and thirst is insatiable. She is characterised as a widow who is ugly, volatile and angry.

Dhumavati is depicted as a sometimes-naked old woman who is painted with grotesque features, either vacant or angry. She sits on top of a carriage or a crow, holding a winnowing basket. In 18th-20th century paintings, Dhumavati has been shown as a young, beautiful and jewelled goddess. As many of the goddesses’ myths are passed orally, the significance of these paintings is lost in translation.