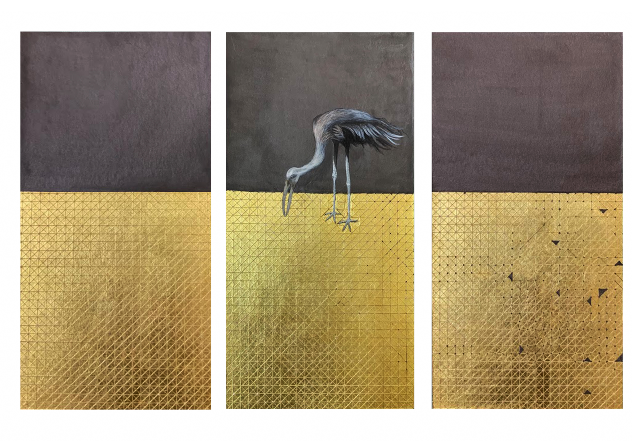 A portion of Gopa Trivedi’s Untitled series—scroll down to see it in full, gold and graphite on wasli from the Sarmaya collection

Like modernists of the past invited the viewer to contemplate, meditate and reflect through their artworks, Gopa Trivedi beckons us to stay in and move with her fragmented frames. They may be small in size but these vibrant minimalist planes articulate concepts with universal resonance: time, decay, renewal. They may be devoid of humans, but they draw from the socio-political discourse of the past and present. They may map a progression but never mark an end, thereby opening up space for many interpretations. 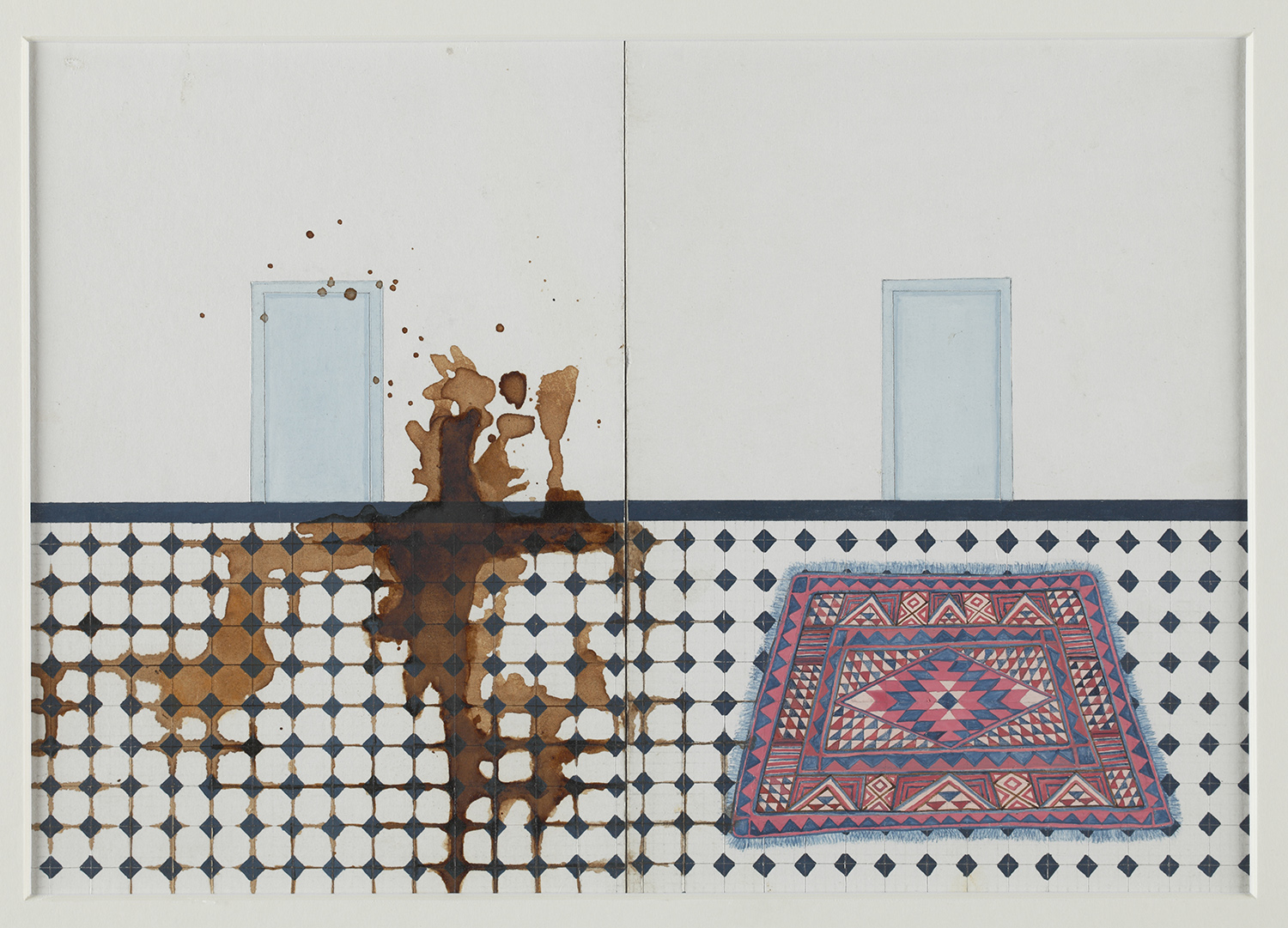 A frame from an untitled series by Gopa Trivedi, 2018, from the Sarmaya collection—click on the image to see the series in full

This interview follows The Time Lapse Art of Gopa Trivedi, a conversation about the artist’s background, inspirations and an earlier series of paintings that traced a stain penetrating into a closed private space. Here, Gopa gives us insight into her recent practice and two untitled series which were part of our 2022 exhibition Echoes of the Land – Art bears witness to a changing planet. These later works were created while the world was immobilised by the COVID-19 pandemic.

How would you say the two untitled works compare to your earlier series?

“I wouldn’t say there is too much of a difference between them. Like the ink works before, these also mark the passage of time and explore ideas of degeneration and the inevitability of certain changes.

Untitled by Gopa Trivedi, gold and graphite on wasli from the Sarmaya collection

“For example, this work was done during COVID. The stork is completely caught up in what it’s doing, unbothered about the situation around him. It is an anthropomorphic figure and the work carries a sense of inevitability. Whether you choose to acknowledge it or not, certain things will come to you because they are supposed to come to you.”

This work is painted in one frame that’s divided into ten sections, as opposed to the other two works which are collections of separate frames. What informs these choices?

“I’ve always worked in broken pieces, that flow into each other through different frames. So the process of working in polyptychs or multiples happens very organically.

“But it is a choice informed by the Rajasthani school of paintings. [Read about Gopa’s background in miniature art.] In them, the artist depicts different time-periods in a single frame. Take a hunting scene. A bear comes into the frame, there is a tussle with the hunter, and then the death. It is hard to tell if the painting is showing you the same bear or several different ones. This is how time has traditionally been perceived in Indian miniatures. So, when I put a work in multiple frames but place it on one canvas, I am toying with the idea of its wholeness. Do these pictures exist in different times? Or do they exist simultaneously? We are perceiving these events as happening on one plane, but it could also be a documentation of a single event happening at ten different places. Breaking the image down in this way allows me to play with the notion of time. I like that confusion.”

Untitled by Gopa Trivedi, gouache and silver foil on wasli from the Sarmaya collection

Where did the inspiration for the untitled series in green come from?

“Sometimes the works of poets resonate with me, especially when I find a connection in our ideologies. This work is inspired by a poem called Ghaas (Grass) by Pash [pen-name of Avtar Singh Sadhu, a famous Punjabi poet of the 1970s].

“The poem was written during the Emergency and Pash saw grass as a symbol of resilience. It will survive. Whatever you do to it, grass will always remerge and survive the remnants of the past.”

This work was part of the ‘Kernels of Hope’ section of our show. What it portrays is a hopeful future, but not necessarily for us humans. It seems to suggest that grass or nature will endure, even if we don’t.

“Yes, that is exactly the purpose of the painting and the reason it is left open-ended. One may see it through its original context (the poem) set in a different time, or may respond to it with contemporary concerns like you have in your show.” 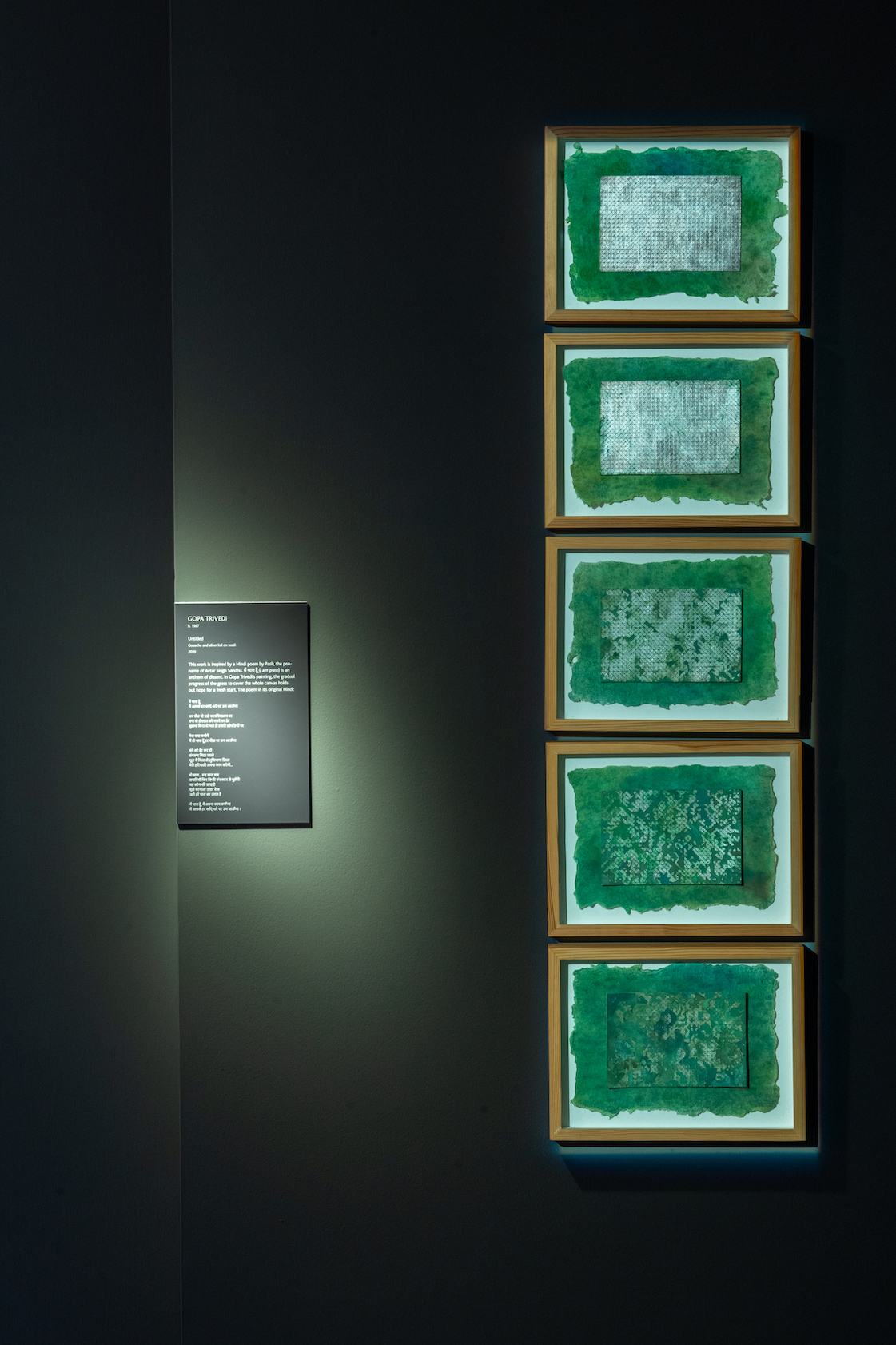 Untitled by Gopa Trivedi on display at ‘Echoes of the Land’, November 2022, Ojas Art, Delhi

Both these works use perforated silver and gold leaf. There’s also a textural element added in the green series. Tell us about this new dimension in your work.

“One reason for this is the medium itself. For example, this work is on wasli. This gave me the opportunity to explore the layers underneath this supposedly flat surface. When I made my own paper, I began to experiment with this idea of exposing what lay beneath. I expanded the intervention further by adding silver and gold foil. I felt this experimentation with the medium also fed into the ideas I was exploring. 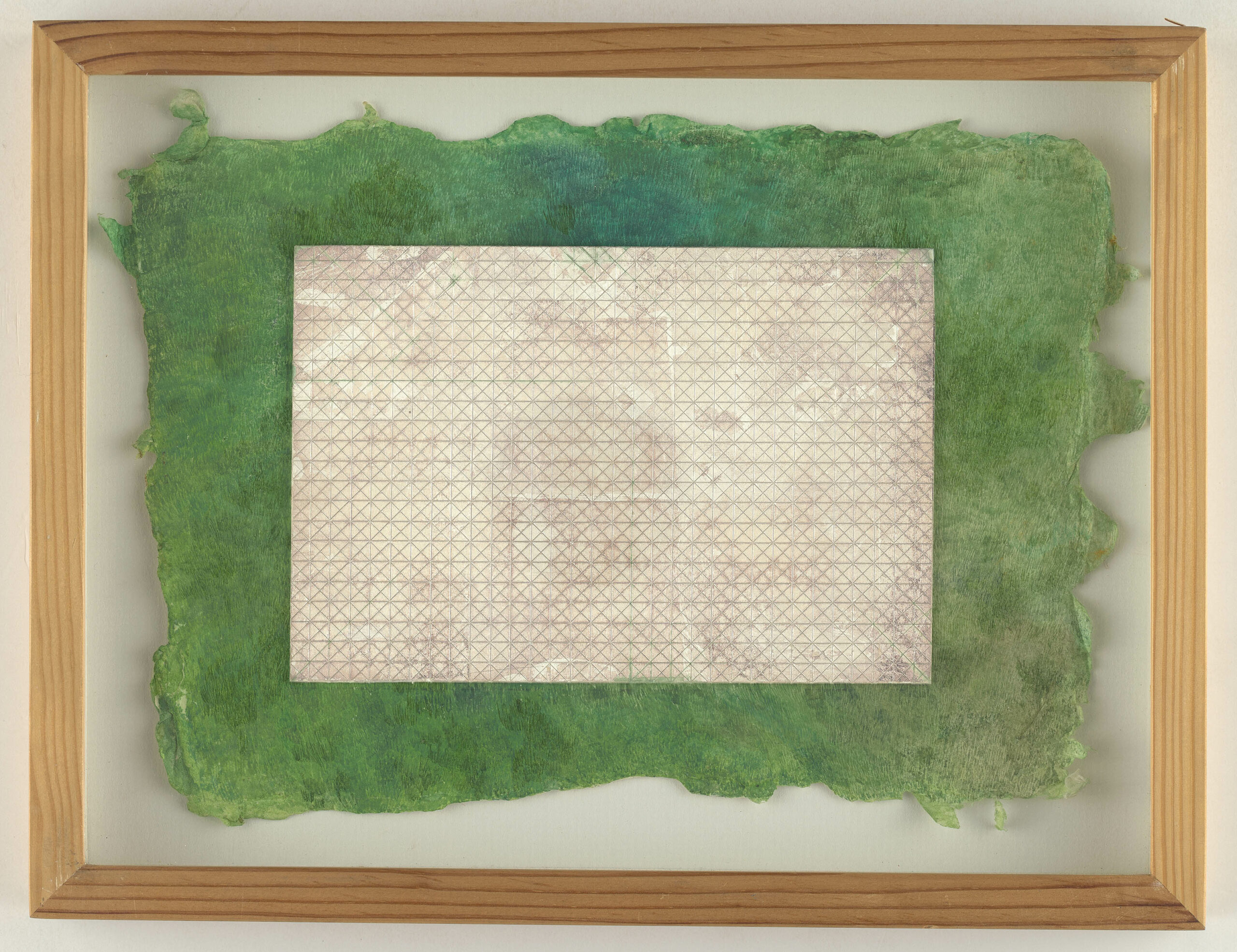 “I’d done a lot of printmaking in college, so creating embossed images like these was already a part of my practice. After graduation, I didn’t have access to the technology anymore. That’s when I developed this technique by making incisions within the paper and creating layers within the work itself.”