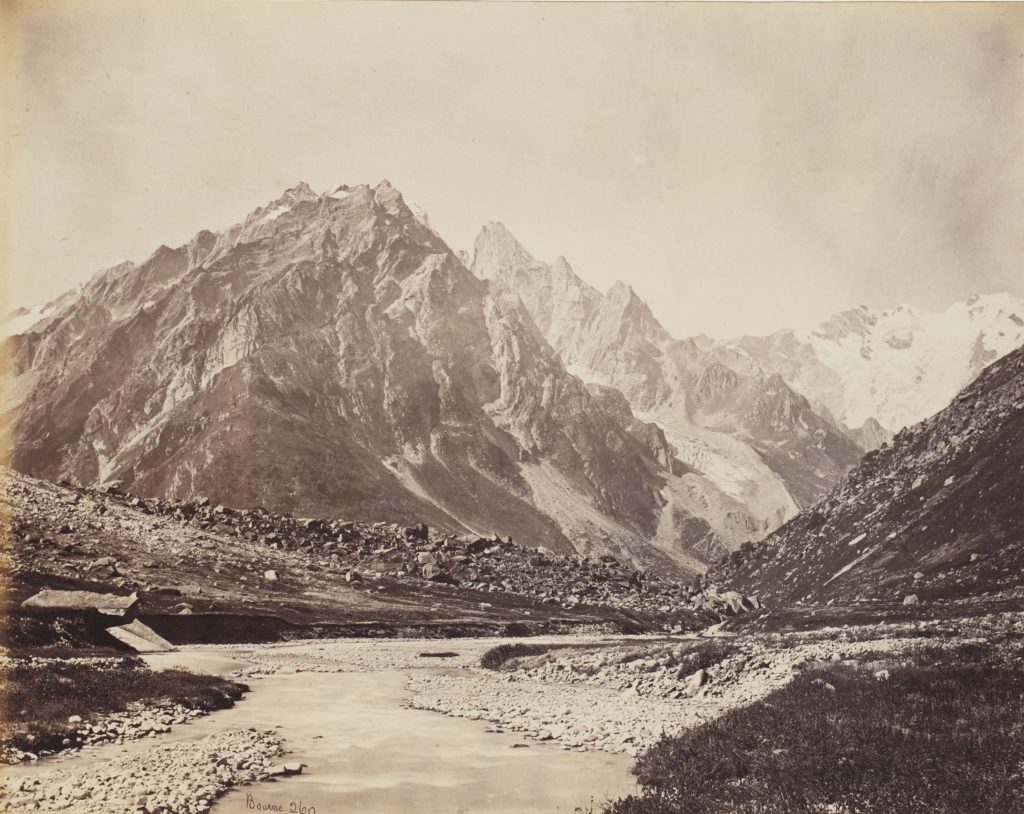 The Himalayas from Wanga Valley

In 1863, a few days after he set off from Shimla for his first Himalayan photography expedition, Samuel Bourne made an alarming discovery: one of the two bottles of chemical solutions he had packed to ‘bathe’ the negatives in had leaked out completely. He was miles away from any store where he could get distilled water, an essential ingredient, to make another batch of the formula. With another ten weeks to go on this trip, Bourne resorted to good old-fashioned Indian jugaad. He used mountain water.

The results were beyond his imagining. Here’s how he describes it in a letter to the British Journal of Photography, “To my surprise and delight, I found [the water] entirely free from carbonate and sulphate of lime and organic matter. I made another bath with it and found that it not only worked remarkably well, but it had a peculiar aptitude for rendering clouds.” 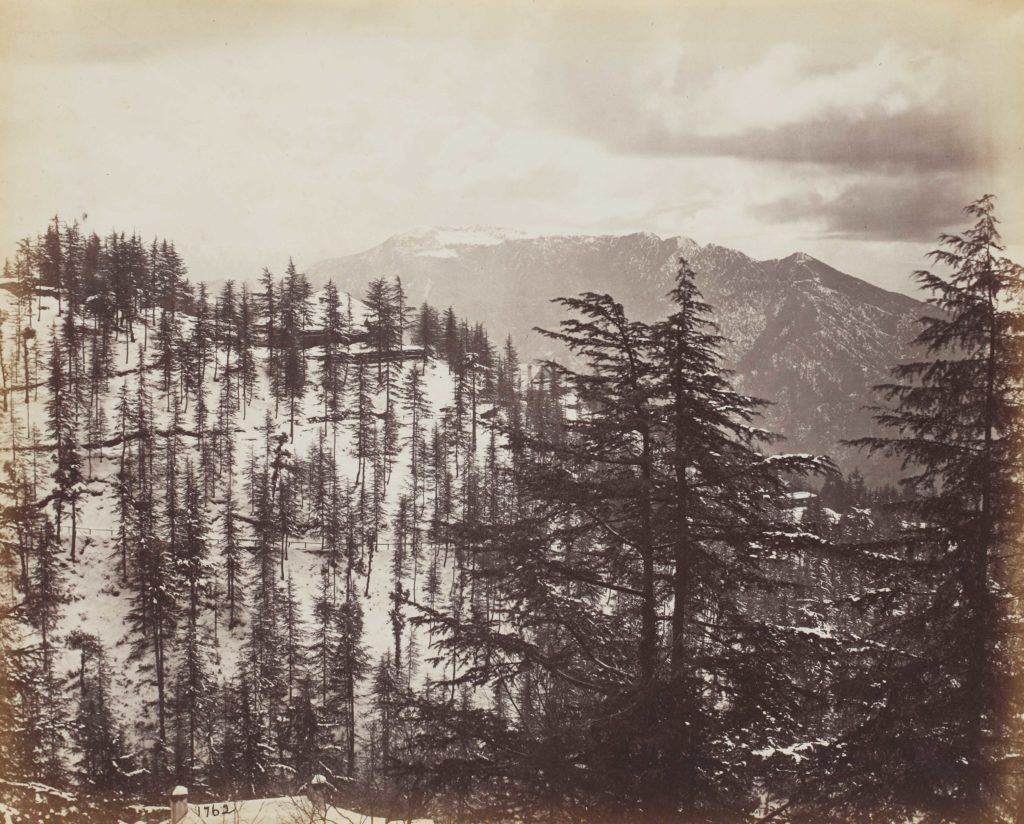 By the time he came to India in 1863, Bourne had acquired a reputation as a keen amateur. It was the next few years spent traversing the valleys, inclines and glaciers of the Himalayas that would seal his legacy as one of the world’s preeminent travel photographers. Sarmaya’s collection includes his images of the the interior mountain ranges, probably the first photographs ever taken in regions like the valley of Spiti and the Gangotri glacier, commonly known as the source of the Ganges. 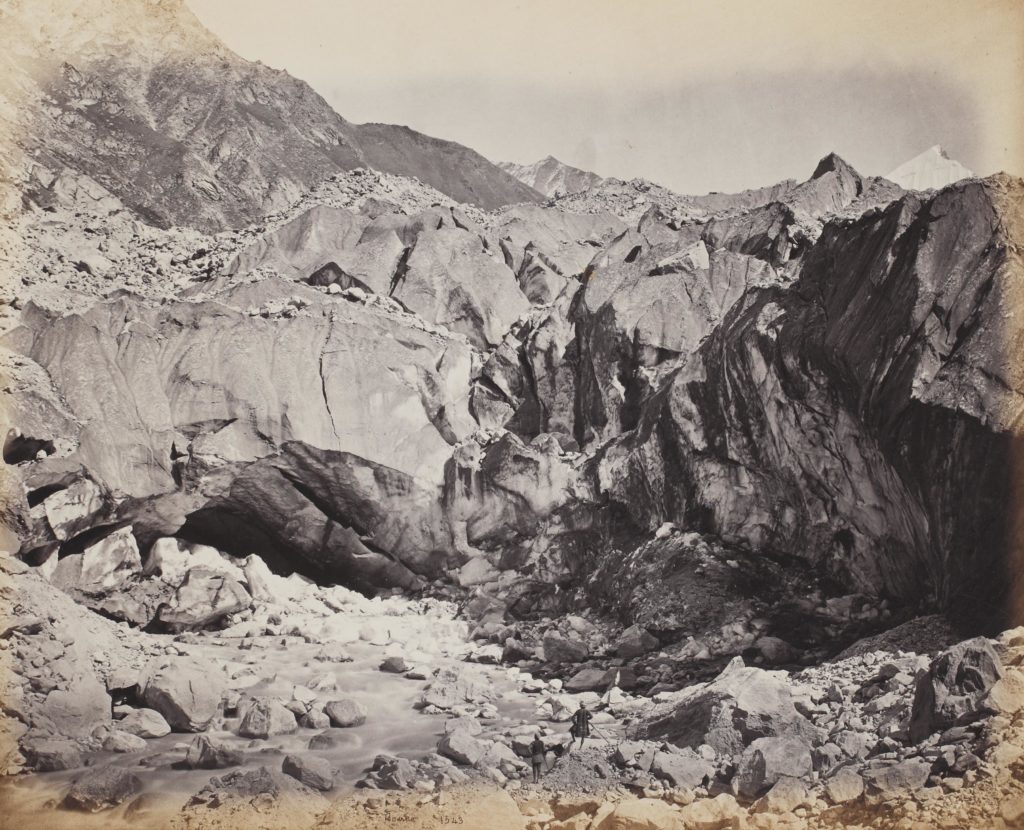 Glacier framing the source of the Ganges

These tremendous feats would not have been possible without three key Indian ingredients. The mountain water, of course. Secondly, the unfettered access and hospitality from locals that the Englishman enjoyed every step of the way. But most importantly, the silent, unnamed armies of men who carried his photographic equipment.

Bourne used the wet plate collodion technique, which is highly labour-intensive, time-sensitive and susceptible to vagaries of the weather. Watch this video for an idea of what it takes to develop one image using this process.

Now imagine doing this hundreds of times over in the desolate, frigid stretches of the Himalayas. Bourne describes moments when his fingers would lose feeling so even holding the plate would be a challenge. Many of the the broad, sweeping views that encompassed earth, sky and water, like the one below, didn’t have a clear trail or any road at all leading up to a vantage point. So they would have to slither down steep inclines to set up their apparatus–at which point a cloud might drift over the valley and put paid to the labours of the day. 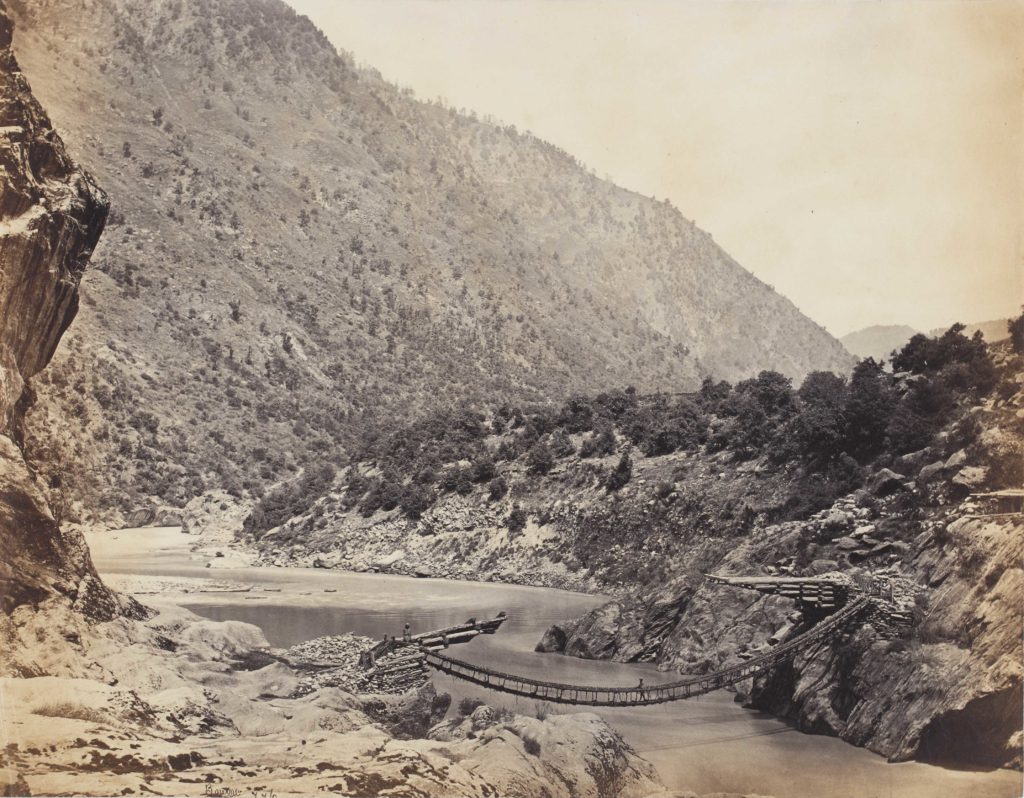 His last sortie into the higher Himalayas took place in 1866. It would be Bourne’s most ambitious project yet, a six-month journey that included a stop at Manirang Pass, which produced the highest-altitude photographs ever taken in the world at that point. This would not have been possible without the 60 Ladakhi men who carried the photographer’s luggage, cooked his meals and set up camp for him every day of those six months in inhospitable conditions. There’s no doubt that these stunning photographs are as much a product of the land and its people as they are evidence of Bourne’s genius. 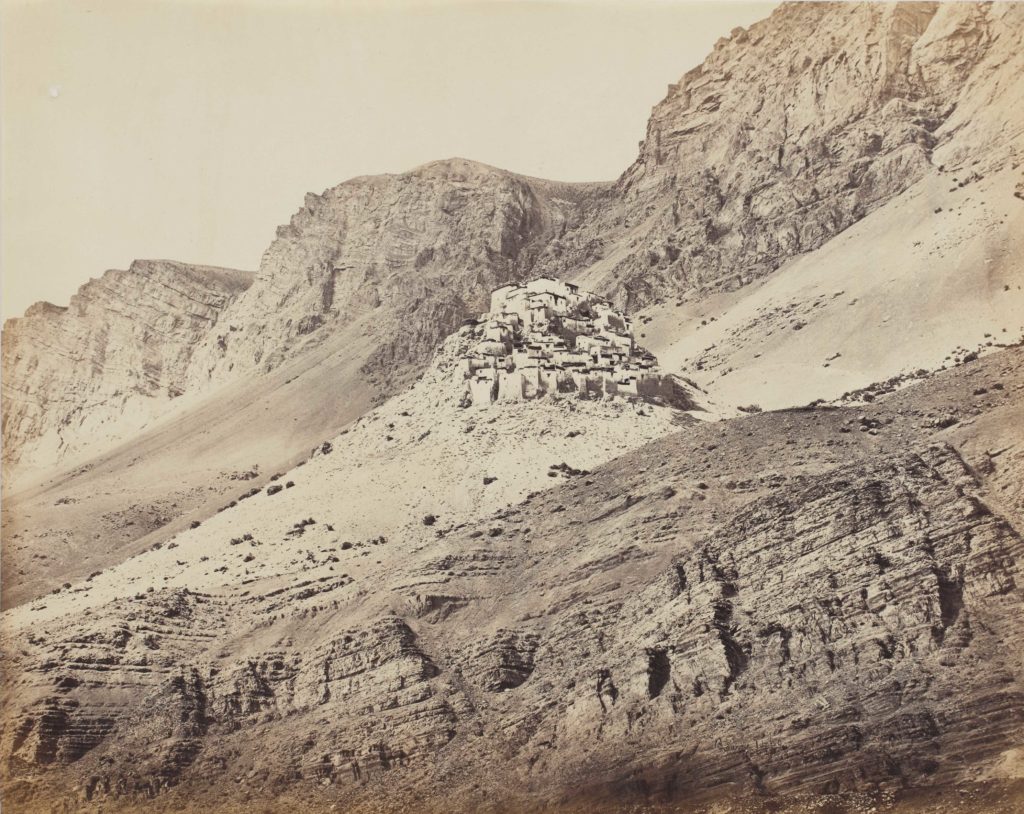 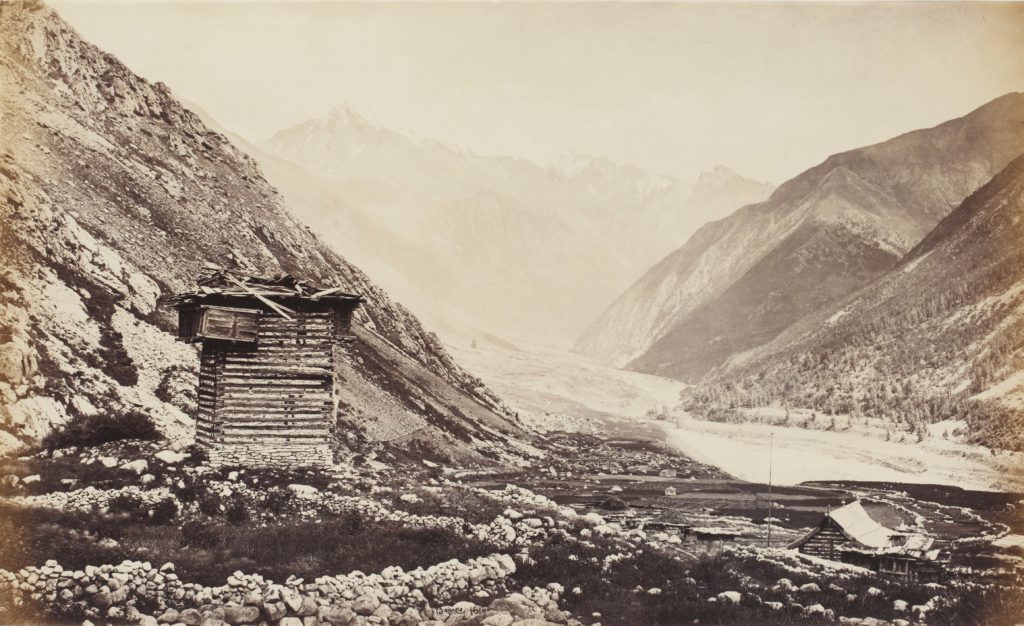 Buspa Valley from the village of Chitkul 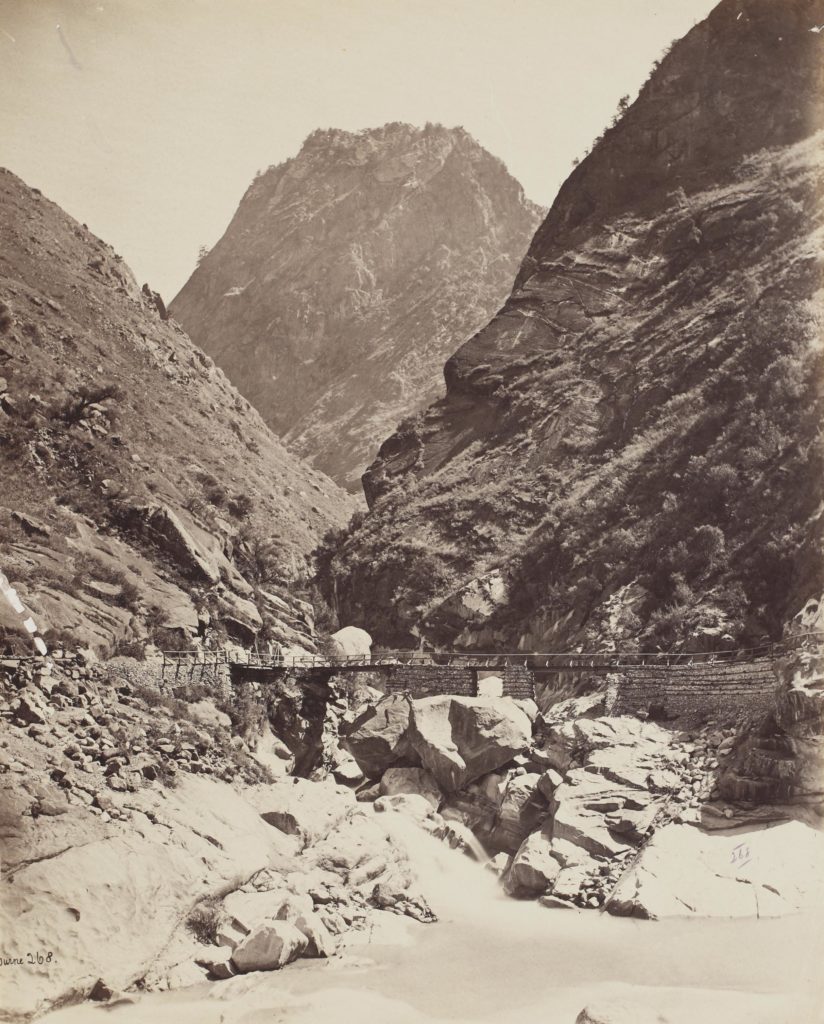 Junction of Wanga and Sutlej rivers 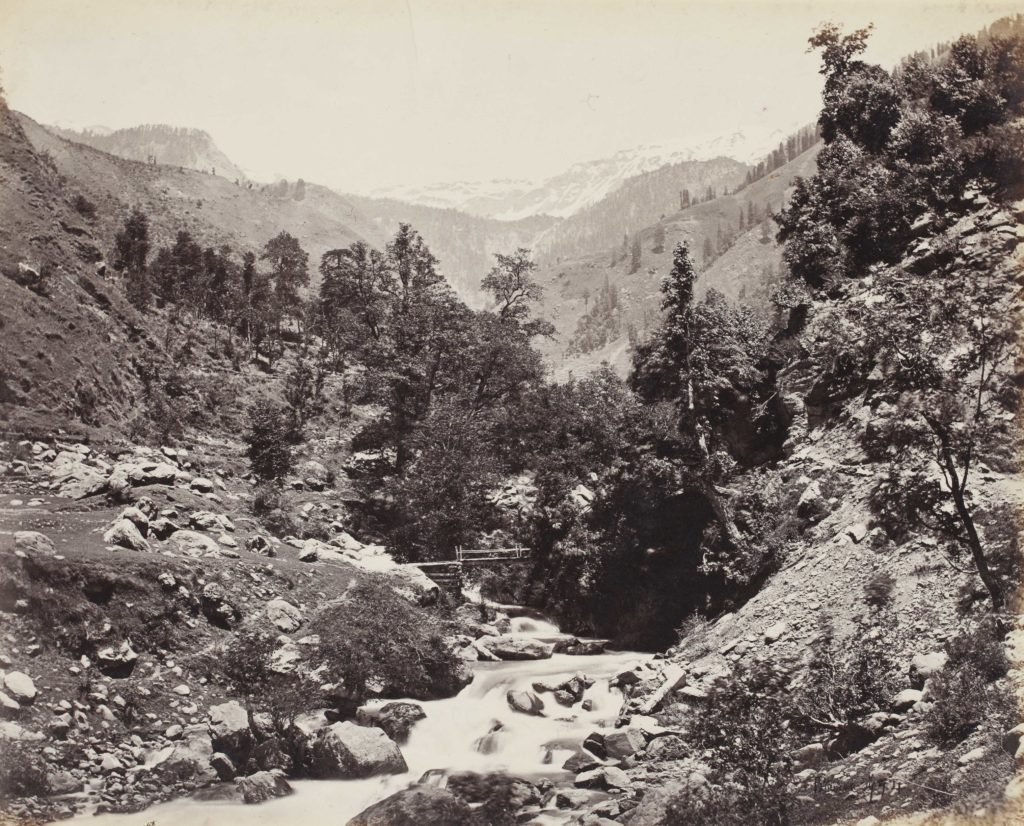 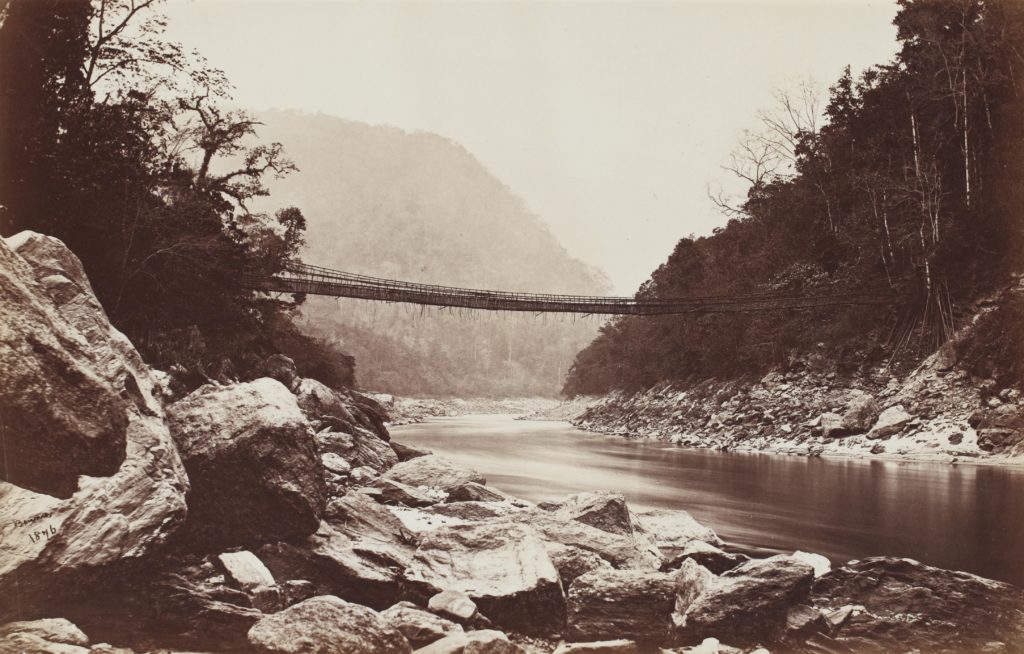